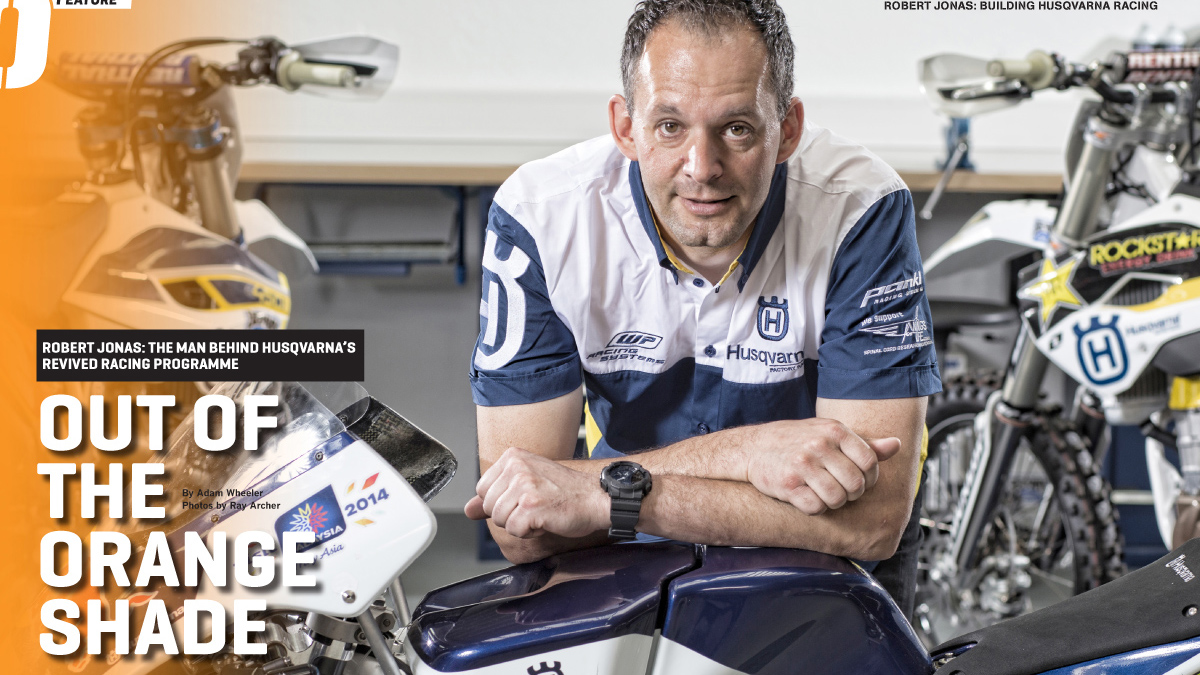 Just in case you hadn’t noticed a white bike won the opening Grand Prix of the year…and held the red plate at the head of a weirdly unpredictable MXGP championship for five rounds. In just its second season of regeneration Husqvarna has lurched into a number of racing disciplines with the same potency, aggression and potential as its orange sister brand. The machinery shares a common platform – as with a number of car manufacturers – but the vital ingredient behind the Husqvarna movement is the same management that propelled KTM to be such a super-force in all racing disciplines.

Back in 2006 KTM were jacking-in their costly 125 and 250cc MotoGP programme, their U.S. racing structure was laughable and motocross was fragmented with an outsourced MX2 team and a ‘super’ investment in MX1 of Mickael Pichon and Sebastien Tortelli helmed by the divisive late Georges Jobe that would ultimately fail. Former Austrian motocross champion Robert Jonas had just joined new racing boss Pit Beirer and the two began to plot an overhaul that helped the company rise to the heights still achieved in the worlds of enduro and rally. Beirer has rightly claimed much credit for the resurgence of KTM – post-financial crisis – up to the point where they unleashed formidable 2016 production 250 and 450SX-F motorcycles and picked up the last major crown (AMA 450SX) missing from a stable of titles and championships that numbered eight in 2014 alone and has now reach a startling 251 in all classes. Not bad for a manufacturer that used to have a reputation for engines that could barely last to a chequered flag.

At the start of 2014 Beirer ‘lost’ his colleague, sound-board and right hand man…but who is the Austrian 40 year old now charged with leading Husqvarna to on-track glory? We sat down to figure out just how Jonas made the transition from racer to racing manager and his part in the KTM monolith that just continues to steamroll forward, even to the point where Beirer is joking about retirement such is the depth of achievement.

“Robert is one of those guys that when he says something then he does it,” opines the German former 250cc GP winner. “He does not promise things that he cannot deliver. He is 100% reliable and that is one of his big strengths. He was never the ‘showman’ and he was never selling himself to people. He worked his way up the hard way but everyone who worked with him found a reliable person.”

Jonas, friendly, talkative – although a little shy – and clearly just a little obsessed with racing, may now wear the white-and-blue in line with his fresh job description but his roots lie deep at Mattighofen. It is from the central racing HQ (actually just down the road from the KTM and Husky assembly lines, in Munderfing) that Jonas has allocated resources to the likes of the Rockstar team in the USA (SX podiums with Anderson and Osborne), IceOne so effectively in MXGP and Jacky Martens in MX2 (Febvre winning in Brazil last year and Tonkov taking a moto success with the new FC250 in Italy) and arming the likes of Jarvis and co in off-road and Enduro and made his stamp already. It all began with a different colour though.

“I had the chance to come into an Austrian supported team in 1992 for the national series and that is when I came into contact with KTM and started riding KTMs. It is quite a long time ago and since then I’ve always been connected to KTM,” he explains. “I was in technical school and in 1995 I started working at KTM in the R&D department for two-strokes. I come from another part of Austria but moved to Mattighofen. You cannot compare KTM now to what it was then. The target was that I’d be responsible for KTM’s two-stroke development department and I had to build up experience. The problem was that I was young and very focussed on motocross riding and racing. I was doing three classes in the Austrian Championship and had five bikes to maintain! I had no mechanic and was there alone in Mattighofen, so it was a busy programme. After a year I was exhausted and recognised that if I want to continue I needed a better solution. I found room to combine the job with some testing which allowed me to go riding during the week but to run a technical department then there really is no room for compromise; it is full-time and it forced me into a decision…and I chose to try racing.”

“I still did some testing with KTM and got a smaller job at a dealership,” he goes on. “In 1998 I won my first Austrian championship in the 125cc class and became Red Bull supported and my career was going in the right direction. In ’99 I won my second championship and got the chance from KTM to enter the 125 factory team with Jamie Dobb as a team-mate and it was a really cool time. It was an awesome opportunity but you could say I was already quite ‘old’, twenty-five, and I had missed a lot because of the schooling. Before the first GP I broke my ACL and could not make the best of my chance. I did not get a second one, which was understandable. I had a couple more years at Austrian level until 2004 when I had an accident and broke my spine. It took me nearly a year to recover from that. I was thirty then and a father and many things in my life changed.”

Jonas headed back to KTM but his years in competition – like Beirer – offered a distinct advantage when it came to the blossoming managerial side of his professional career. Perhaps there is no other motorcycle manufacturer with the racing acumen of Beirer and Jonas when it comes to calling shots on what it takes to become a success. “I think what we experienced in racing helps a lot,” he confirms. “You have to understand the riders, the mechanics, the girlfriends of the riders and everything around racing to make a good job. I know what it means when a mechanic complains that he has too much work. I would say life has changed a lot in the paddock now at the highest level…and it was harder in the old days. I know how it is to work on your own bikes.”