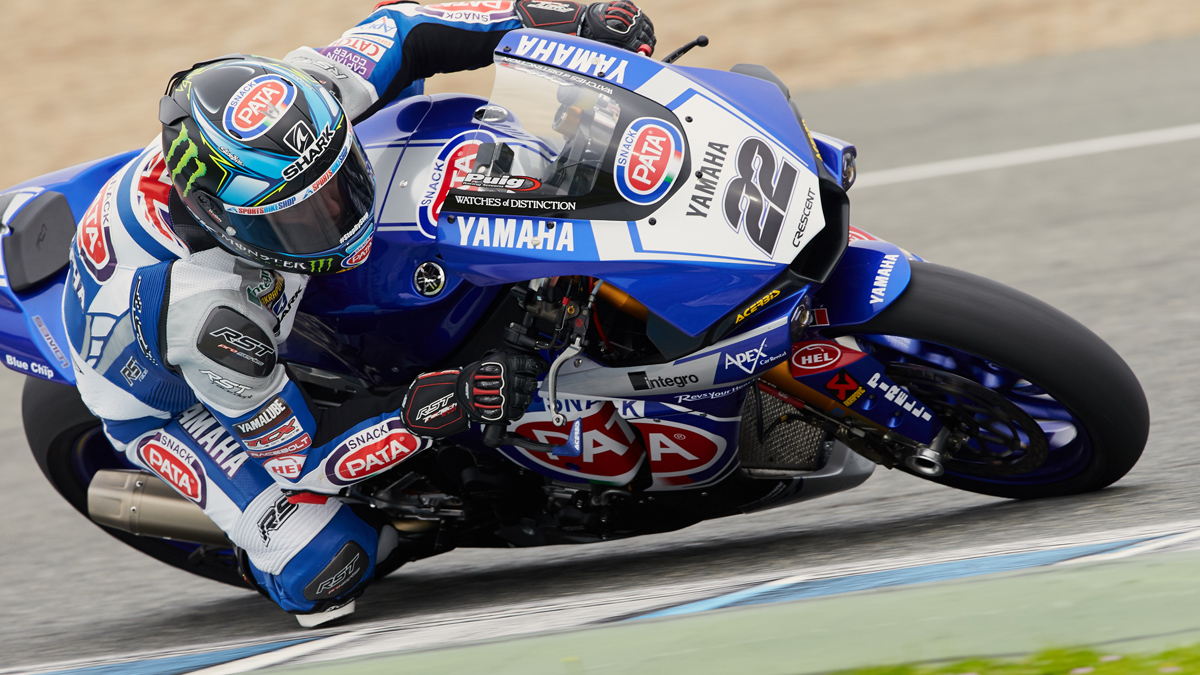 When Alex Lowes lines up for the 2016 Superbike World Championship races at the Phillip Island Grand Prix Circuit in Australia in a few weeks’ time, not only will it mark the fifty-first WorldSBK start of his career, but the beginning of his competitive collaboration with the Pata Yamaha World Superbike outfit. For after two years of fighting hammer and tongs with the underdog Voltcom Crescent Suzuki, the pride of Lincolnshire, England had made enough of an impression with the bLU cRU to earn a spot on the marque’s full-on factory team for ’16 and beyond. Armed with the striking YZF-R1, it is the weapon both he as well as the Yamaha brass back in Japan hopes will allow him to reach his manifest destiny of being a World Championship contending rider.

Alex, the 2016 Superbike World Championship is now spooled up and ready to fire off. With testing and the beginning stages of forming a  bond with a new race team behind you, are on the pace and where you want to be with a fourteen-round odyssey about to begin?
Yeah, obviously the last two years have been slightly more difficult for me because I’ve not had a competitive bike, but I’ve been on the Yamaha now and know how good the bike is. I’ve also got a good team behind me and my teammate has been World Champion, so yeah, we’re on the pace and we’re looking quite good. I think the first couple of rounds will be more difficult, but our bike is going to keep getting better and better, so it’s an exciting challenge.

How did the Yamaha YZF-R1 feel and react to you when you first climbed on it and put in your first stint of laps?
It felt great. I did about five laps and came in the pits and had a big smile on my face straightaway because when you’re changing bikes or teams, you sort of understand the level of the bike you’re on. I was a bit sort of nervous because I didn’t understand how good or bad the bike that I was on was. When I rode the Yamaha I did about five laps, I had a big smile on my face because there were so many areas, that even in that first few laps on the bike, it felt so much better. It was very positive for me. It’s normal to be happy with that.

Was there anything significant, be it the chassis or engine that really separate the Yamaha from the Suzuki?
In terms of the chassis and the engine, it felt fantastic straightaway. The engine is so smooth and easy to understand that it makes the bike feel really fun to ride, so that was the biggest thing that I felt straightaway. The Suzuki was always quite difficult because you were always a bit behind on power, especially with torque off the corners, and you were always trying to play catchup in other areas which made it even more difficult.

Reigning World Champion Jonathan Rea won a host of races until the man finally found the right bike last year. The rest, as they say, is history as he joined the Kawasaki World Superbike effort went on quite  a run to dominate the 2015 World Championship. To your way of seeing things, can this be true of other racers? In other words, perhaps there is a selection of riders who might be held back a bit by their equipment. What’s your take on all this?
Yeah, I would say so because I think I feel like with riding with these guys the last two years, I understand a lot more now than I did back then about the level of riders and stuff. I think I rode really just without the reward of the results because I didn’t have the package to get the results. I’m definitely on that now and I think I’ll make a big step. I don’t have to ride any better than I was doing last year, it’s just that this year we’re going to be closer to the front and we’re going to be in the mix and it’s going to be a lot more exciting.

In your opinion, how many riders who will compete in the 2016 WorldSBK Championship will be in possession of the machinery and skill required to mount a serious charge at the title?
In terms of the whole package, and there are so many fast guys, but I don’t think they are all on good enough bikes to challenge for the championship. I think you’ve got maybe six guys that are on good enough bikes and I’d probably say the only bikes that are going to win the championship are the Kawasaki, Ducati or Yamaha. There will be other guys winning races and I think it’s going to be a lot closer this year than it has ever been before, or has been for the last four or five years. I think it’ll be one of them three teams that end up winning, in my opinion.

Are you content to be in World Superbike in 2016?
Yeah, I’m happy where I’m at. I’ve got the right opportunity at the right time of my career and I’ve got the right amount of experience now to make the most of it. You can’t look back and say I wish I would have done this or that. I’m happy with all of the decisions that I’ve made. I hope that I can try a win in World Superbikes and then maybe in the future I could have an opportunity to be in MotoGP. I understand that to do that I need to win in Superbikes first. My goal is to just focus on that. Like I said, I’ve had two tough years where I’ve learned a lot of things about me and about racing in general. I definitely feel like I’m a lot more prepared than, let’s say, I would have been have I gotten this same opportunity a few years ago. I think you always learn a lot more when you have those difficult years when everything seems to be going wrong. I mean last year right up until the last race, we had issues. I still turned up to the last race feeling as good I ever had both mentally and physically and I gave it everything I had. If you can come through years like that still feeling motivated and strong, it’s going to make it slightly easier when you have got all the things in place around you to get the job done. We know that’s not always possible and we’ve seen so many cases without the tools, you can’t win and you can’t be competitive. You have to be sensible and I think that I’ve learned that now.

What sort of things are you getting interested in outside of racing?
Not too much, really. I play a bit of golf with my brother and I ride motocross, which is still motorbikes, but a totally different sport. I enjoy doing that. Apart from that, I don’t have too much time to do anything else.

Between you and your twin brother Sam, who is better on the motocross bike?
Me! I’m definitely faster than him and I’ve got more style!

What are the best two or three movies you’ve ever watched?
Top Gun, Talladega Nights and Bad Boys II. I like comedy.

What are your favorite bands or music acts?
My favorite song is probably Fast Car by Tracy Chapman and I like Guns N’ Roses and some old stuff in terms of bands. I quite like them.

In your opinion, who are the three coolest motorcycle racers of all-time?
For lots of different reasons, Wayne Rainey, Mick Doohan and Valentino Rossi would be my top three guys.

What do you think about Nicky Hayden coming back to WorldSBK?
It’s cool. It’s great for the championship. I think he’s a fantastic rider and I think he’s going to do really good. He’s someone else who I’m really looking forward to racing against. I think we’re going to see a lot of sideways action which is obviously going to be great.

By Eric Johnson, Photo by www.yamaha-racing.com