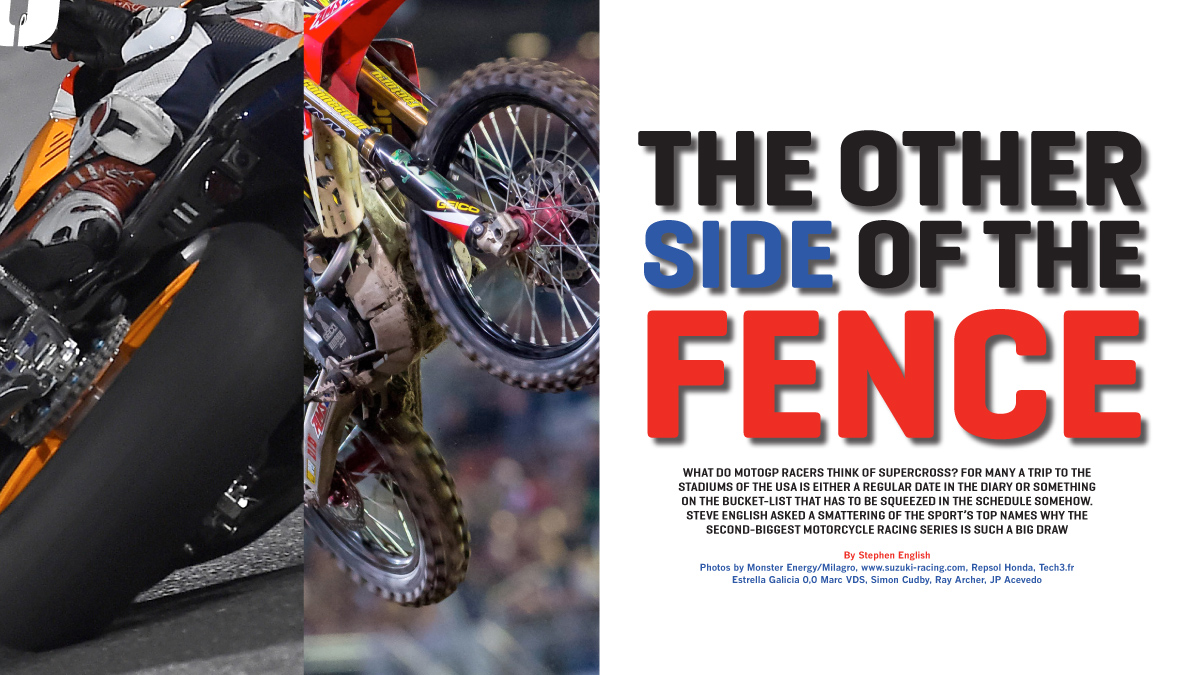 Having a one track mind is something that most racers are accused of from time to time. When there’s any gathering of riders conversation quickly turn back to racing so it’s no surprise that for most the ideal holiday includes a trip to Supercross. In the MotoGP off-season there is almost as much world class riding talent in the stands as there is at the gates!

The atmosphere of a night at the races is something that draws casual fans to Supercross but it’s also something that the likes of Andrea Dovizioso, Casey Stoner and Jack Miller love about the AMA mainly-USA set championship. With some of the best motocross riders on the planet to watch and an intense and lively race schedule that sets the scene for an action packed evening it’s no surprise that the championship continues to grow in popularity.

So what can MotoGP learn from Supercross? Who impresses the top riders in the world with their skills on the dirt? Here’s what some of the fastest motorcycle athletes in the world have to say on these matters…

Casey Stoner ”It’s a different world over there! It’s in a stadium, which makes for such a confined space and you almost don’t know where to look because there’s that much going on. You’re watching the big screen and you’re trying to watch your favorite rider and then you hear the crowd go, “Ah!” There’s a big gasp. You look back up at the big screen and you see something that’s happened over that part of the track. During the whole night you get that much action between the heat races and it really is a great spectacle and something that I’ve wanted to do for a lot of years. So being able to go to four races in 2014 was something I’d wanted to do since I was a very, very young boy. That was awesome.”

“It’s one of those events that you can take the wife and kids to and everyone’s able to have a good time. When you look at a MotoGP race or World Superbike or anything like that, it’s a lot harder to get people in the door just because it’s spread over a long time. Is there anything that we can do to try and make things a bit more family friendly? Supercross is good because people walk around the pits and things like that, and that’s all good but it just couldn’t happen here. You’d have too many people coming in and you’d never be able to move. You can barely move as it is.”

“I think because you sit down in one spot, you can see everything; it’s entertainment right there on your front doorstep. They do it on [American] football fields and it’s the same kind of thing as watching football. You get to watch the whole thing unfold right in front of you rather than bikes flying by and you just can’t really improve that. The closest you get to that in MotoGP is Valencia. It’s as much as an amphitheatre as you can get. That’s a fantastic spectacle but then you don’t necessarily get close to the track like you can in other circuits.”

Bradley Smith ”Supercross is great because there’s great fan interaction. They can get up close, they can get autographs signed and so on and so forth. The fact that you turn up at 7pm and it’s finished by 10:30 makes a massive difference. We’re trying to do more for interaction and IRTA and the FIM have now put it in the regulations that all riders and everybody have to be available for the autograph signings and stuff like that. So it’s something that we all have to take on board as riders. We have to go over into the fans areas and to the pit lane a lot more. Something that I’ve always tried to do is be available for the fans on the pit lane and doing the exterior things where you go out and do the Monster rig or you go and do the promotional signings from the actual promoter of the weekend. It’s something that we need to take a bit more seriously and make sure that we’re available for those types of things.”

“The actual way that the shows run, I don’t think there’s much that we can do here. The fact that you can put it in a stadium, put 70,000 people there and keep everything so contained is obviously a really nice situation to be in. When you’re trying to put everyone around a 5km track and make everyone feel welcome, it’s a bit more difficult. You turn up at Valencia and there’s a great atmosphere. Why? Because it’s a 4 km circuit within a ‘stadium’. Unless we’re going to build every track like that it’s more difficult to do. But certainly the fan interaction thing is something we have to take more seriously.”