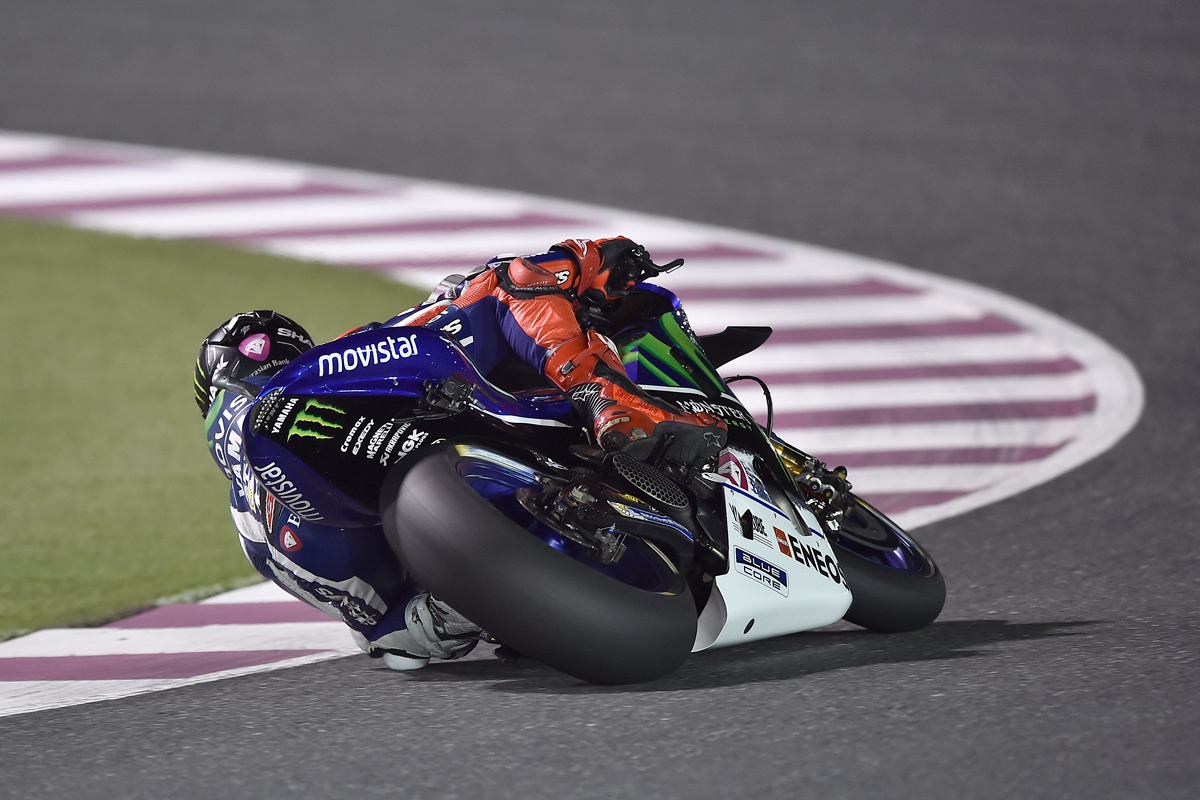 ‘Surprise’, ‘unpredictability’, ‘mystery’ were some of the adjectives used even by some of the MotoGP protagonists themselves in the opening hours of the 2016 season at Losail where anticipation and nerves were barely exercised in a rapid ‘extra’ forty-five minute Thursday session amid all the photoshoots, TV graphics commitments and other formalities that launch a fresh MotoGP term.

Curiosity was high for Michelin’s new tyre batch and the performance of the Hondas with benchmark reference Marc Marquez negotiating an interrupted run and setting a 1min 56.2 lap-time, eight tenths slower than Movistar Yamaha’s Jorge Lorenzo who headed the session from his first attempts at a rapid circulation and with Valentino Rossi, Andrea Iannone, Hector Barbera, Maverick Viñales, Pol Espargaro, Dani Pedrosa, Marquez, Andrea Dovizioso and Scott Redding behind the Majorcan respectively and within a second of the ‘99’.

“The lap-times came naturally and I’m sure sometimes this year we will arrive to tracks where we will not be fast in the first practice or the second, but today was similar to the test and this was positive,” the champion said in a busy media debrief afterwards. “The bike was working smooth even though we have less sophisticated electronics and for sure this creates more movement and but compared to other riders we are ‘in the line’. It is not like we have a big difference but we were in first place for most of the session and being alone doing .55 was a good start.”

Marquez – a previous winner at Losail in what is now the fourteenth edition of the Grand Prix at Qatar (Lorenzo has two wins and Valentino Rossi four, tied with Casey Stoner) – was more downbeat after an unproductive outing.

“We changed some parameters of the electronics and we expected an effect or a small difference but it was actually very big and the feeling was very different,” the Catalan explained. “For this reason I could not find the way or the lap-time and was doing one or two laps and then stopping. I was feeling strange on the bike and not consistent. We are playing with torque, engine braking and traction control and last year with the traction control we had a base whereas now we are still trying to find the base. We arrived here with a good [overall] base but without the electronics. We must work but the team are doing well and I think on Sunday we will have a good package.”

LCR’s Cal Crutchlow had some sympathy on the RCV (“we know Qatar is always difficult for Honda”) but his conservative run to the twelfth quickest time and over a second from Lorenzo was not without plausible cause. ““The track was really dirty in the first few laps and we have a few strange things going on with engine braking and corner entry; the rear keeps coming around for no real reason,” he offered. “We’ll investigate and see for tomorrow. It could be the hard rear tyre we were using. We didn’t take any risks and we know the track will be a lot better.”

In between being terrorised by a hungry cat during his media session (note: the thirty year old is not a feline lover) he also shed some amusing light on his degree of caution: “I was losing four tenths every lap where the bike landed on my balls [his crash in testing], so you can tell I wasn’t pushing too much tonight. I was also almost stone-last in the last sector [where the crash happened]! So when I start to push I’m sure we’ll have a lap-time. Over a race distance? I don’t know and I don’t think any of the Honda riders know what to expect. I think we can be there and be competitive enough. It depends on how much we heat that front tyre.” 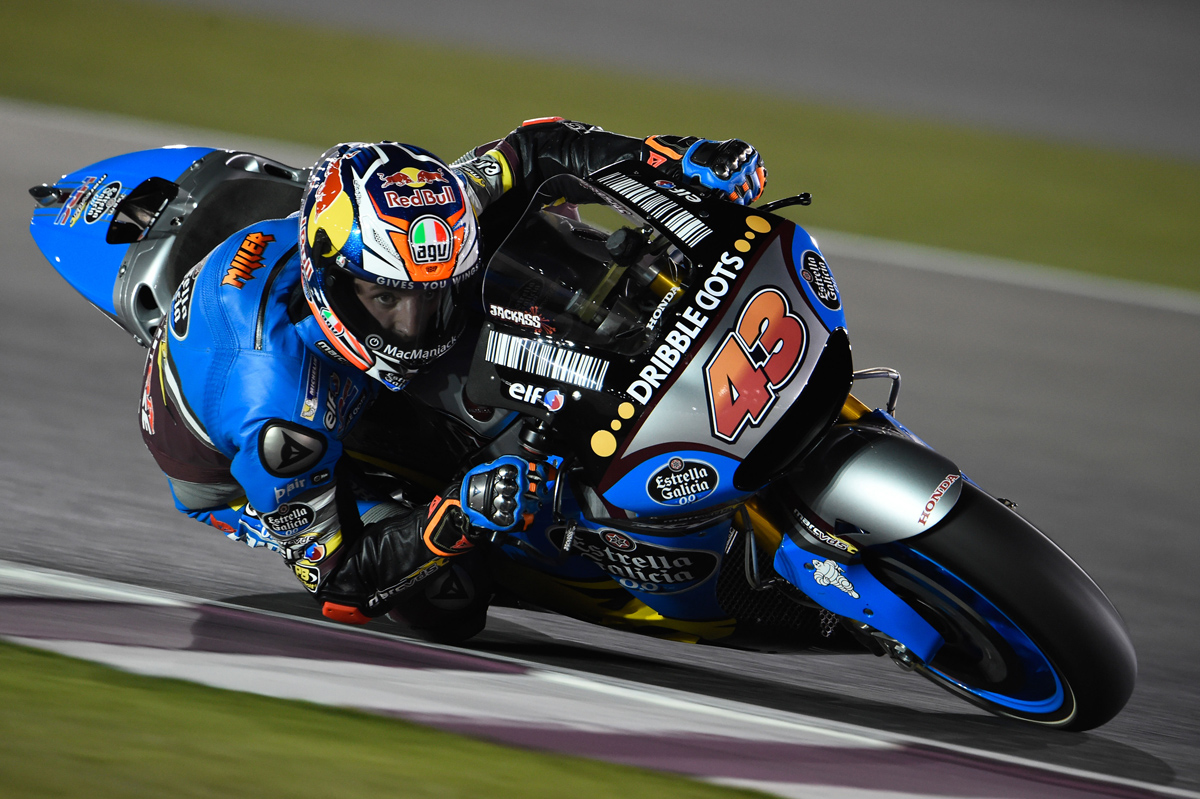 One rider happier with the performance of the Honda was Estrella Galicia 0,0 Marc VDS’ Jack Miller. The Australian hobbling slightly less compared his gait at the test two weeks ago and complimentary on the RCV’s aspect compared to the maligned production version he had to steer in his debut season in 2015. The twenty-one year is still trying to adapt his riding style courtesy of the hard motocross smash that left his right lower leg in pieces and now sports three considerable scars around the ankle joint. “What has been hardest is trying to pivot off the ball of my foot and on a GP bike I almost have to do it in two parts, so I move up and roll on my toes and then back down to use the rear brake,” he said “That was a bit easier this week.”

“The corners 4-5 and the double right is the hardest point for me because you are off the bike so much there and you have to try and use the rear brake,” he continued. “We’ll get this [GP] out of the way and look at the next tracks.” 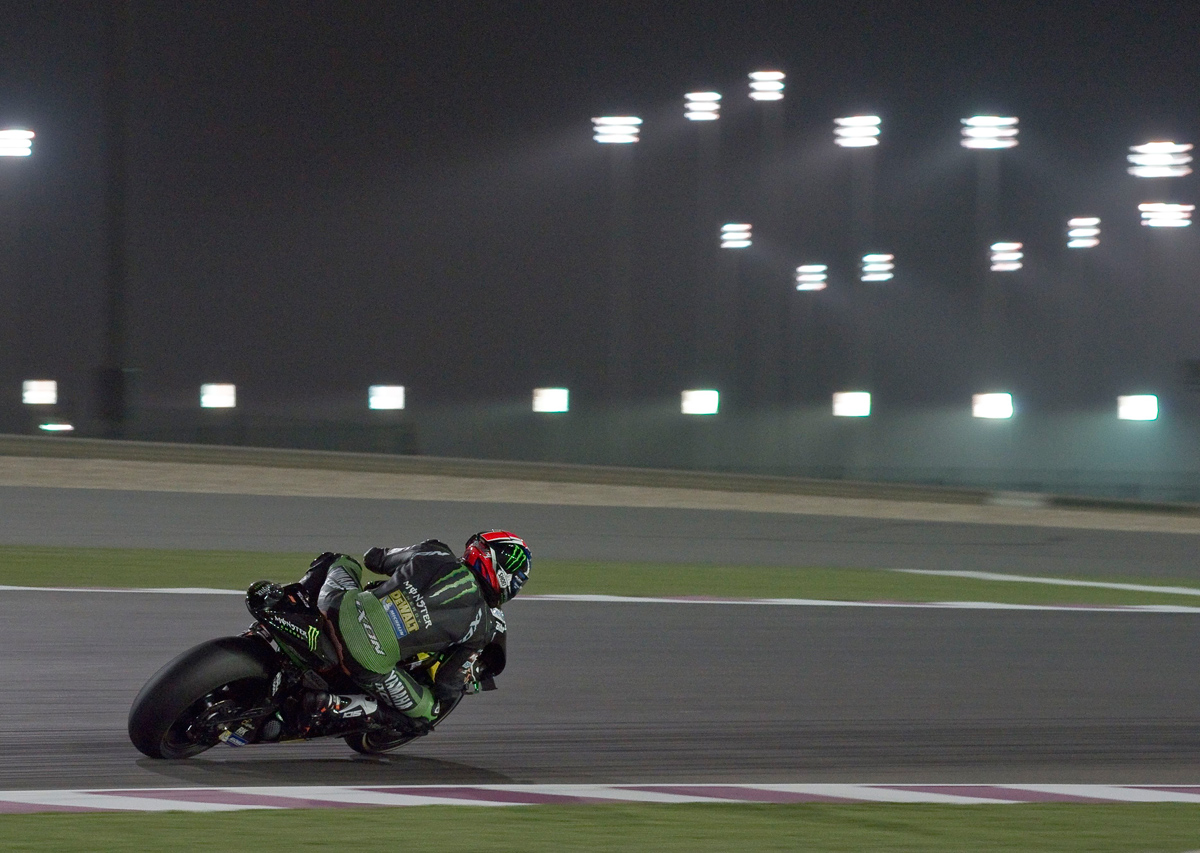 Owner of the unwanted label of ‘first crashee’ of the year belong to Bradley Smith who tumbled at Turn13. “Unfortunately as soon as I touched the throttle I tucked the front,” ‘38’ said. “It was somewhere I was struggling in the test and I was losing something in the region of 2-3 tenths [of a second] through turns 12-13-14, so that was where we were focusing tonight and it seemed I was losing the time due to a bike setting not because I couldn’t do it.” Smith was also the subject of some enquiry about his future plans. The Brit had posted a Blog on MotoGP.com the previous day with a surprise admission that his five year tenure at Tech3 Yamaha would end in 2016 as the team want to renew their remit for Yamaha as the developer and ‘staging’ for younger riders. The reaction was one of surprise and puts a question mark over Smith in the first half of the season. Prior to his media debrief teammate Pol Espargaro was pulled into a meeting with Yamaha head honco Lin Jarvis. When asked about the talk and what Bradley had announced the Catalan – who allegedly will also make way in the French team, although this has not been confirmed – was quite forthright: “It’s too early. We come here with a lot of illusion and we cannot think that the ‘wall is falling’. We cannot think that. OK, the pre-season at some tracks was not good but you have to be positive. You cannot think ‘I will stay home because the teams don’t want me’. You think ‘I will have a really good season and all the factories will want me’! No panic.” 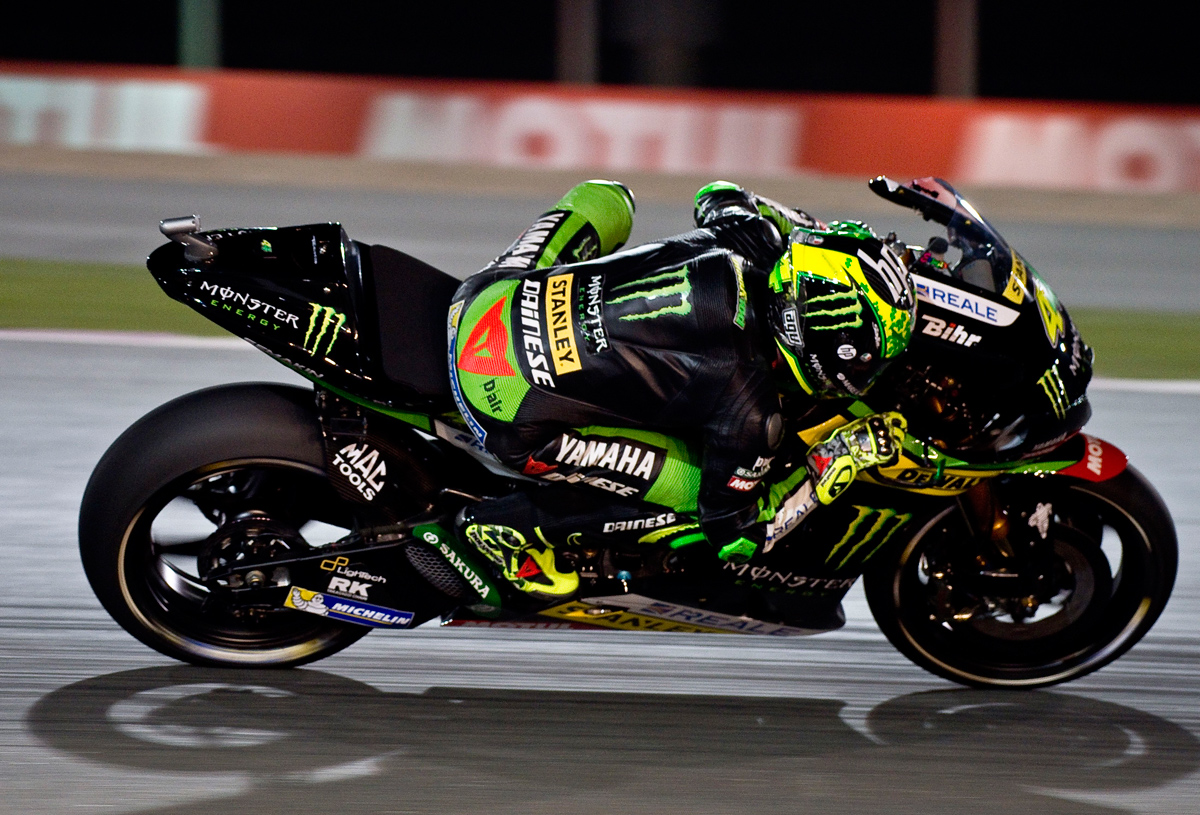 Espargaro has expressed misgivings about his suitability with the Yamaha and the tone of his public comments so far in 2016 would indicate that the twenty-four year old will not have a seat on the works team with Lorenzo and Rossi close to renewing their current contracts. But he was quick at Losail and posted the fastest time in the first two sectors only to lose out in the last. “It was the first practice of the year and I was quite nervous,” he said. “I wanted to go fast and ‘boom boom’ but it was not the way to do it. I did a lot of mistakes on the last run despite being quite focussed. I did the fastest lap with eighteen laps on the tyre.”

“The first tyre you put on you [usually] have to throw it away and the track was also dirty because of the rain…but…we kept the same tyre and it means with low grip we can make a good lap-time,” he went on. “Michelin has amazing performance in the beginning but lap-by-lap it is improving, well, for me! With the Bridgestone it was the opposite.”

“I hope! I will pray for it tonight,” ‘44’ added on his potential to be one of the ‘surprise’ factors across the twenty-two laps of round one. “I did a race simulation in the test and it was good. I don’t know if I will be the one to surprise everybody but I think it will be a crazy race.” 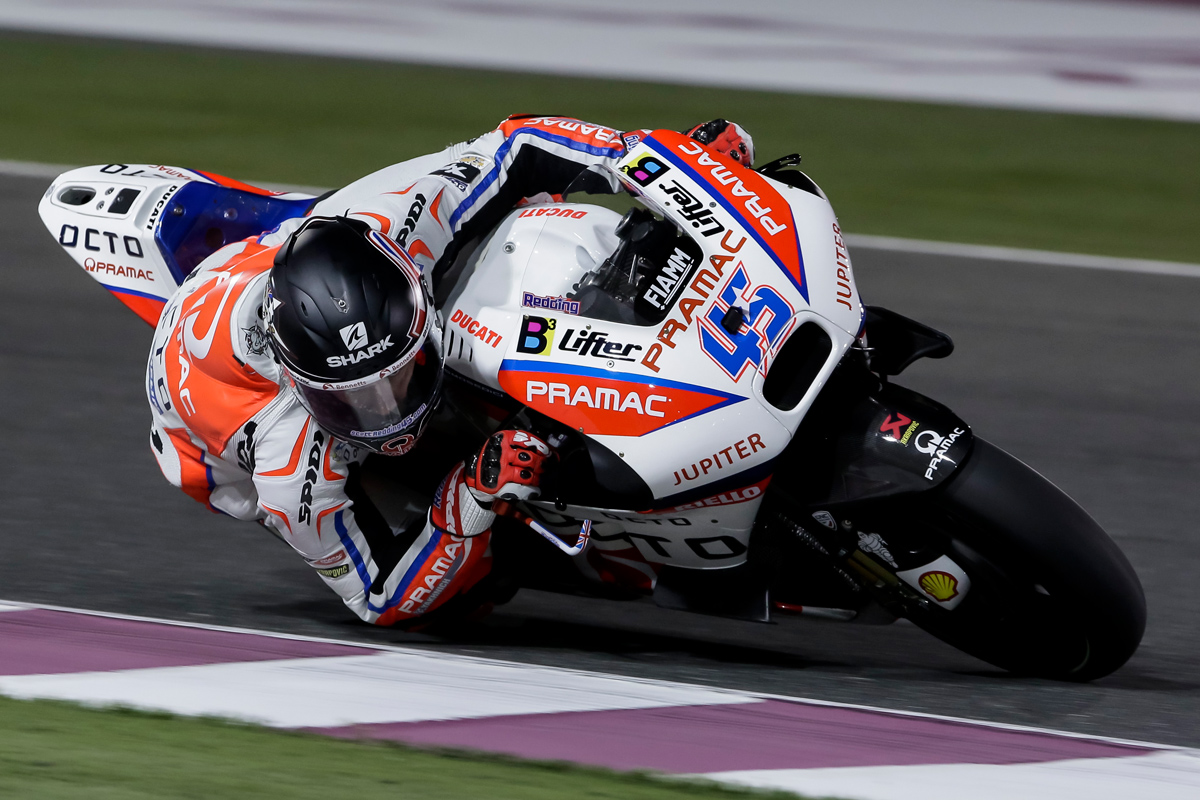 While Moto3 (Livo Loi, Jorge Navarro and Joan Mir the riders to follow in the two sessions) and Moto2 (Jonas Folger, Thomas Luthi, Sam Lowes and Alex Rins catching the eye) enjoyed two outings on the first day MotoGP had to be content with one. The brevity caught out Octo Pramac Yakhnich’s Scott Redding. After his form in testing onlookers were watching to see when the twenty-three year old would notch a time among the leaders…but it never came. “The session felt like ten minutes!” he said. “I had an issue with the new paint on the seat and had to come in but I’ve never felt a session so short in my career. I was doing 56.4s because that was the limit of the setting we had. I was running wide in the faster corners and I could feel the time going. We are not panicking.”

“I’m glad that we are back on this forty-five minute schedule because it puts riders into pressure,” said countryman Smith. “You don’t have time to warm-up into it. You have to turn-up sharp ready to go and that’s one thing I am happy about with being back in competition.”

Wednesday had brought sustained rainfall and the effect on the track meant the asphalt was dirtied further…but MotoGP did benefit from the runners in the other categories and the extra rubber.

“The rain and the Dunlop rubber were two differences from the test,” explained Redding. “The feeling was different but the data shows more grip. I think it was the setting we had and I was relying more on the tyre and not the suspension.”

Friday morning and the sunshine has arrived back in Doha after three cloudy days where the climate has mirrored the current ‘haze’ over MotoGP. Times are bound to tumble more during the extended track time this evening and the ‘race’ at this stage is to prove who has the sharpened potency for the 73.5 mile distance on Sunday night.