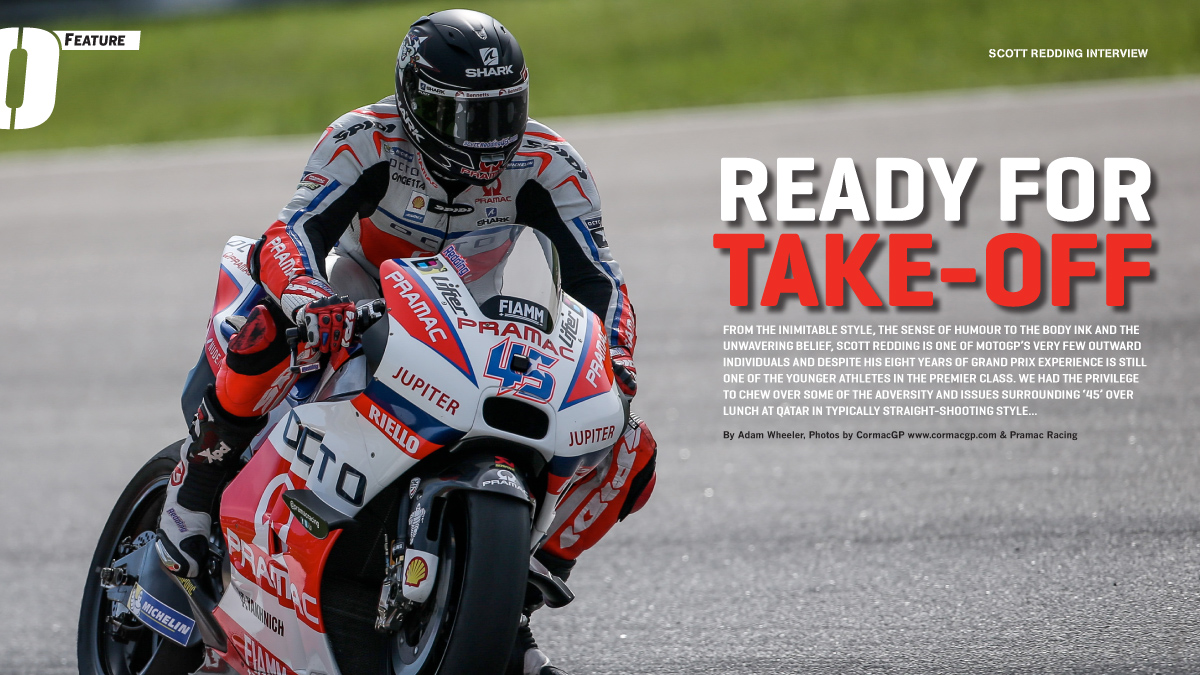 Unsurprisingly Scott Redding is partial to spicy food. Arguably one of the more forthright, outspoken and individualistic riders on the MotoGP grid and rated as one with vast potential Redding has taken advice, hedged bets and ultimately been disappointed with career choices for the past two years but now he’s ready to tuck into the job like he is attacking the plate of hummus with added sauce across the table at Nando’s restaurant.

We’ve met up for lunch in the confines of the shopping centre in the depths of downtown Doha. Like the twenty-three year old we’ve walked into the facility from a nearby hotel to find a few culinary creature comforts in Qatar. MotoGP shirts and staff are dotted around. At the same eatery the previous day Eugene Laverty, wife Pippa and brother John were also working through the Nando’s menu. We’ve already chosen our takeaway for the long evening ahead at Losail that same day.

Redding is on good form. We’ve interviewed him at the beginning of his superb Moto2 year in 2013, midway through the same campaign when he was leading the championship (ultimately to be denied by a broken wrist in the final rounds) and then at the end of his apprenticeship season in MotoGP in 2014 where some insecurities and cold realisations over the state of play with equipment in the premier class were provoking some worrying signs of stagnation and prickling his patience. Although that period covers three years there is still a feeling that Scott is an athlete on the edge of something. The technical rules that have slightly jumbled expectations in MotoGP are playing into the hands of promising satellite riders like Redding (like Laverty, Petrucci, Espargaro and so on) and the springboard to factory status now carries more bounce. If he is going to cause a stir in MotoGP similar to his pita bread concoction for our starter then this is the season [and he would come pretty close to a second podium finish at Argentina for round two].

Redding is carrying more tattoos; almost as if he has etched the emotions of his MotoGP travails over the past twenty-four months as a means of release and to mark a reminder of what he works for and what he sacrifices to make an ambition happen. He’s pleasant company and small talk is easy. We chat about watches, fitness, ‘other halves’ and his recent penchant for triathlons and training. Have 2014 and 2015 dented the confidence of a rider that never seems in short supply of self-belief? It would seem so…

The reason I started was because last year I needed motivation to stay fit and stay strong. It didn’t matter what I did on the bike I always had the same results so I was demoralised in that respect. A friend invited me to try a Triathlon; I’d always been ‘into’ it and wanted to try, so we did it. I loved it. I loved the training. People think that there is no technique in cycling or running only in swimming…but I can tell you that there is! I’m strong on the bicycle – I’ve done that all my life – swimming was my worst and I couldn’t do it when I was younger. I struggle to float because I don’t have any body fat. But I learned it and tried to improve and the same with the running. I have a Garmin watch and it is nice to see all the data coming back at you. It is like seeing data from a bike but from your body. It kept me motivated.

Can you get obsessed by the training or the events?

It does get a bit like that. I end up training for four things: running, cycling, swimming and the racing. Training three times a day means that it does tend to take up your life…and that is just short distance. I’ve entered an Iron-Man in Holland for later this year and it will be a big step. I need to do some Olympic distances in between. The training is different because it is not short and fast, it is long and finishing is the main thing. I’ve bonged out a few times. I’ve been out running and got to the point where I cannot even walk. I thought ‘come on, you can at least walk…’ but I’d be 2km from home and be wondering how I am going to get back! It is about understanding your body, understanding food and to excel in those areas. Food can make such a difference.

People who see your social media channels and media work can see that you are into your food. Is the diet thing also a bit of a hangover from the Moto2 days?

The diet thing is…well, weight is also a disadvantage whether we are talking MotoGP or no MotoGP. I always try to keep my weight down but also try to keep strong. I would not say I am ‘underweight’ but I want to be more comfortable. I was extreme-dieting for many years and I probably benefit more by carrying two kilos of muscle and strength than I would by carrying two kilos less weight. Everyone needs to treat themselves sometimes and I was fed-up with not doing that. So I live a bit more comfortably but then I am training harder than I used to. There is always that balance. Food is also about being healthy and not just thinking about weight loss. A few years ago I did one week of just eating McDonalds and processed, sh*t food…and I lost weight believe it or not! I did not train and was only doing a bit of mountain biking because I classed the period as a ‘week-off’ and I lost a kilo! I felt like sh*t though and was waking up lethargic and tired. As soon as I started eating vegetables and protein again and getting the balance back I was much more energised and started training again…and gaining weight1 It was quite frustrating to see that but I was feeling much better. 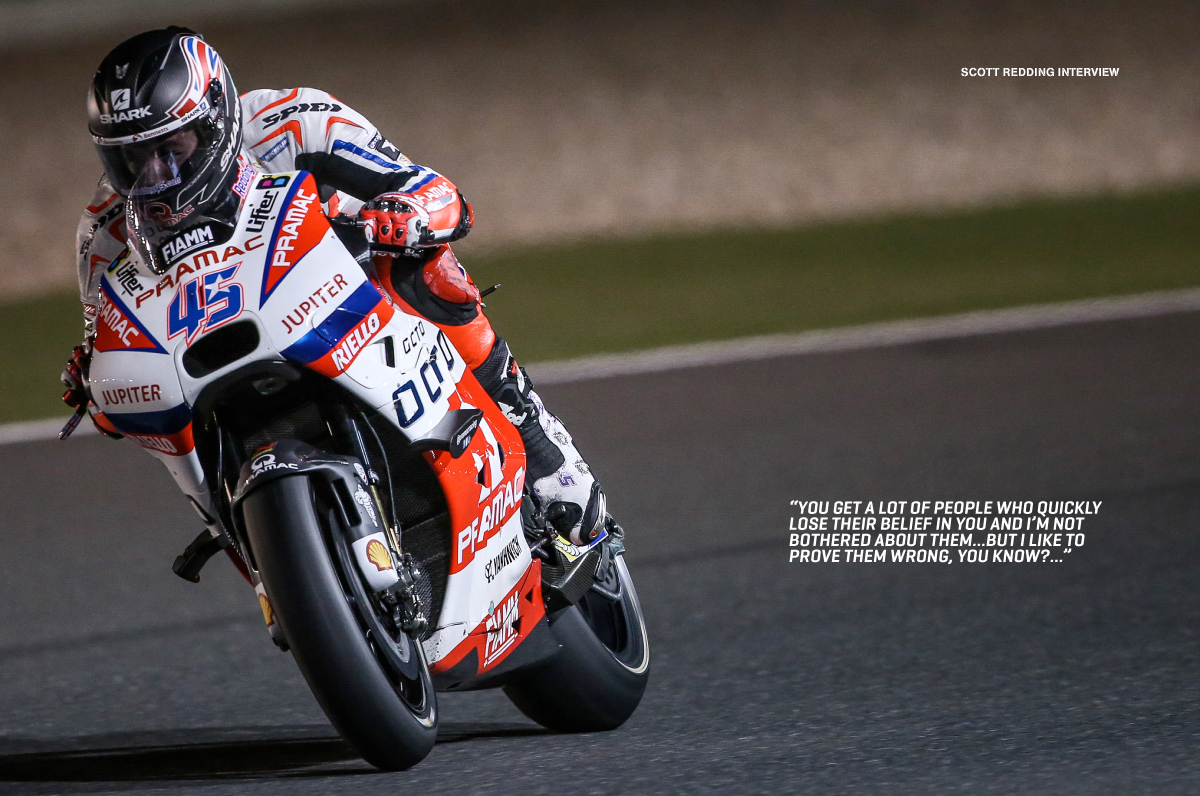 It’s also time consuming as well isn’t it? Getting in the kitchen to make a good spread of the right stuff…

Yeah and that’s why it helps to have some good people around you pitching in. A lot of top athletes just don’t have the time. I’ve got more time in the day and I do it myself but there are moments when I get someone to help me. Having a good girlfriend who is willing to sort that out is helpful! The main thing is making time for it.

You always seem to be ‘individual’ about things. Many riders tend to have a bit of an entourage. Where do you stand on that or what do you think about it?

I’ve been born and bred in Gloucester…so that’s my style! A guy who walks in a group is a weak man in my opinion. I’ve had someone by my side sometimes – especially when I was fighting for the title [Moto2 in 2013] because it gets busy! But you don’t need them all the time. Having more people around you means more to worry about. I’m old enough to sort out my own problems…but I also feel that there will be a time when I’ll need more help. On the other hand I know that I will always be the same and if I was a multi-time world champion then I’d still come here to Nando’s on my own. That’s who I am.