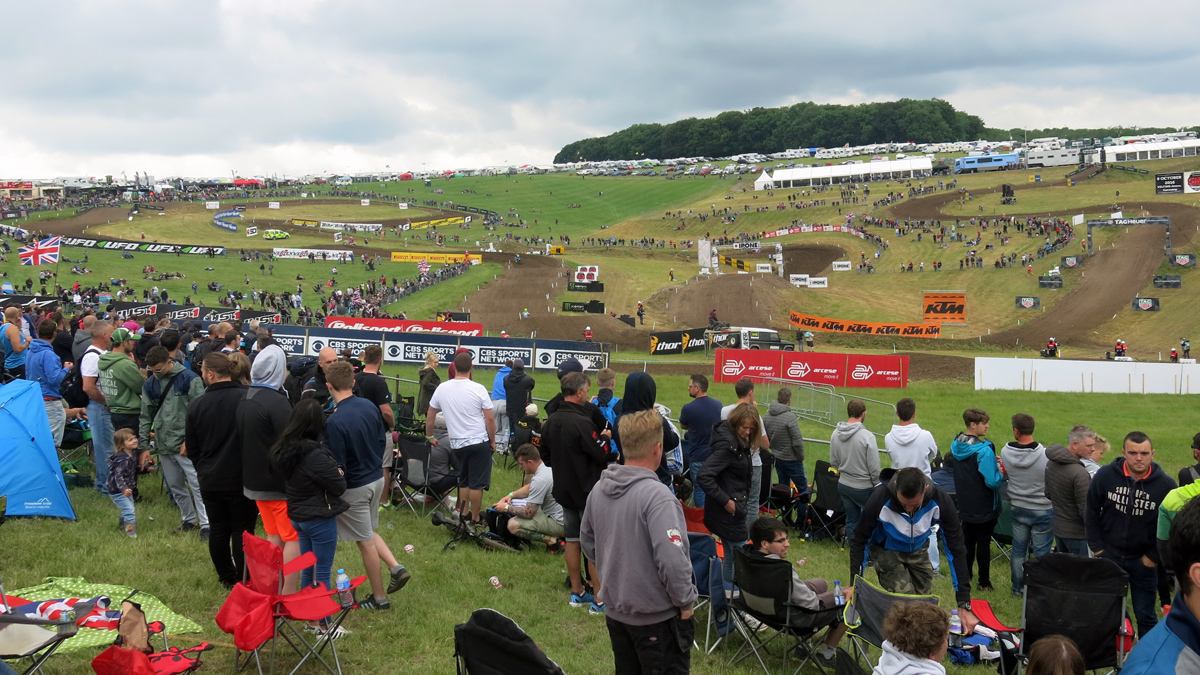 Many thoughts on Saturday evening were on the status of MXGP World Champion Romain Febvre. Matterley Basin was in pristine condition and the layout and overall facility had coped well with the heavy summer showers and stormy climate hanging over the eleventh round of eighteen in MXGP. The fast terrain was the scene of shocking crash in the premier class Qualification Heat. While Honda Gariboldi’s Tim Gajser was escaping to his sixth pole position and third from the last four rounds (and since the Slovenian had admitting to changing his strategy and mental approach to the races) Febvre was attacking the condensed group ahead of him battling for fifth position and the jostling between the athletes Clement Desalle, Tony Cairoli, Jeremy Van Horebeek, Tommy Searle and Glenn Coldenhoff was the action highlight of the day.

Trying to pass Townley on the outside of the turn at the lowest point on the circuit the Suzuki rider clipped the Yamaha man and Febvre went down hard. “With Romain I came out of the corner ahead of him and he was almost an exact bike length behind and to the side,” the New Zealander explained after he arrived back to the paddock and after having ridden past the chequered flag and straight to where ‘461’ was receiving attention. “My back wheel skipped out and took his front wheel. I guess he face-planted into the jump. I’m really sorry about that. It was a racing incident and there was nothing intentional whatsoever. It sucks for that to happen to anyone, especially the world champion and someone in contention for the championship. I feel a bit gutted about that.”

According to first reports Febvre received a hard impact to his head and was suffering with concussion. He was motionless and underwent attention on the track for three laps before being taken to the medical centre and then the local hospital for more checks especially on his neck. “I want to wish him a quick recovery; what to say?” commented Gajser in the press conference. “I will do my race normally and this won’t change anything for me. I will try to be at the top again and give my best. As a rival and a racer you never wish for someone to get injured.”

The latest word from the hospital on Saturday evening was a painful neck and some effects associated with concussion such as memory loss of the incident.

The news overshadowed what was more excellence from Gajser, increased competitiveness from Desalle, with Rockstar Energy IceOne Husqvarna Max Nagl and HRC’s Evgeny Bobryshev also quick but unable to catch a view of the Slovenian pace-setter who now looks as though he will increase his MXGP championship lead of 24 points over Febvre significantly. The accident proved – once again – that nothing can be taken for granted in this sport and why nineteen year old Gajser is wisely playing down all talk of his hegemony in MXGP. It remains to be seen if Febvre can be in condition to compete at Mantova in seven days but his chances of retaining his crown will be slim if he misses two Grands Prix. 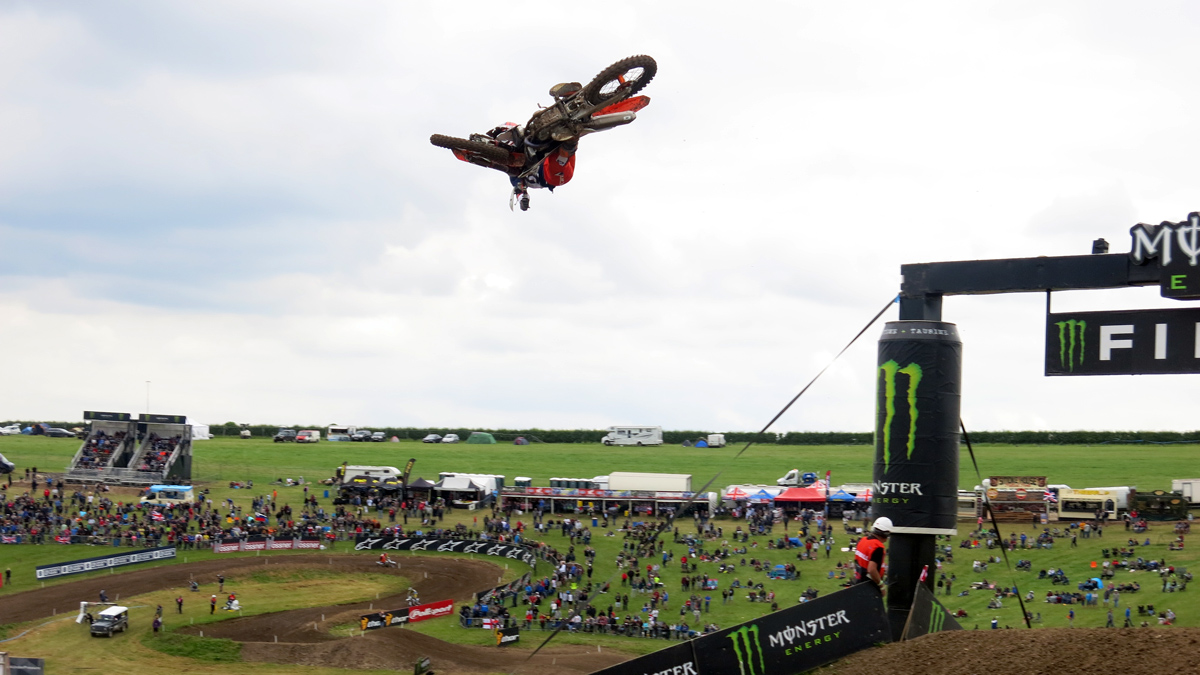 Was the twenty-four year old pushing too much in his recovery from a poor start? It is a likelihood you can consider…but then Febvre has always attacked each moto and this was of riding was not out of character. Like many in Grand Prix it seemed that his luck finally ran dry.

Chad Reed? Riding a stock YZ450F Yamaha (with factory suspension from the U.S. an ECU switch and a new pipe) the Australian made a promising start but dropped back to fifteenth with a rear brake problem. ’22’ (with an added ‘G’ for guest so as not to eclipse the absent Kevin Strijbos) admitted in a Monster Energy public forum on Saturday night that it was unrealistic of him to be able to “hang it out” with the Grand Prix leader for two thirty-five minute motos and was anticipating top ten results.

MX2 saw a close duel between Rockstar Husqvarna’s Max Anstie – again showing his speed at Matterley Basin, a former happy hunting ground where the Brit almost tasted victory twelve months previously – and Monster Energy Kawasaki’s Dylan Ferrandis. Anstie caught, shadowed and eventually passed the Frenchman for his first Pole Position of the season. Suzuki’s Jeremy Seewer – who headed Free and Timed Practice – recovered from a first lap fall to take third. And what of Red Bull KTM’s Jeffrey Herlings? The Dutchman started poorly and then couldn’t show any of his normal rapier speed in cutting through the pack. It later emerged that the championship leader is dealing with a painful right foot after an incident in the Dutch Championship at Markelo where he was victorious. This could be Anstie’s best chance for a GP win and his first on the FC250.

Despite a steadfast grey ‘ceiling’, Matterley Basin felt like a busy place. The presence of four European support classes meant a packed paddock but according to Grand Prix organiser Steve Dixon, pre-sales had been better than ever for the 2016 edition of the event – the sixth in a row at Matterley – and the steady progression in terms of establishing the British fixture; a meeting that only ten years ago seemed something of a poisoned chalice as it bounced around venues and promoters without a hint of stability.

Dry conditions and yet more public are hopeful signs for Sunday.