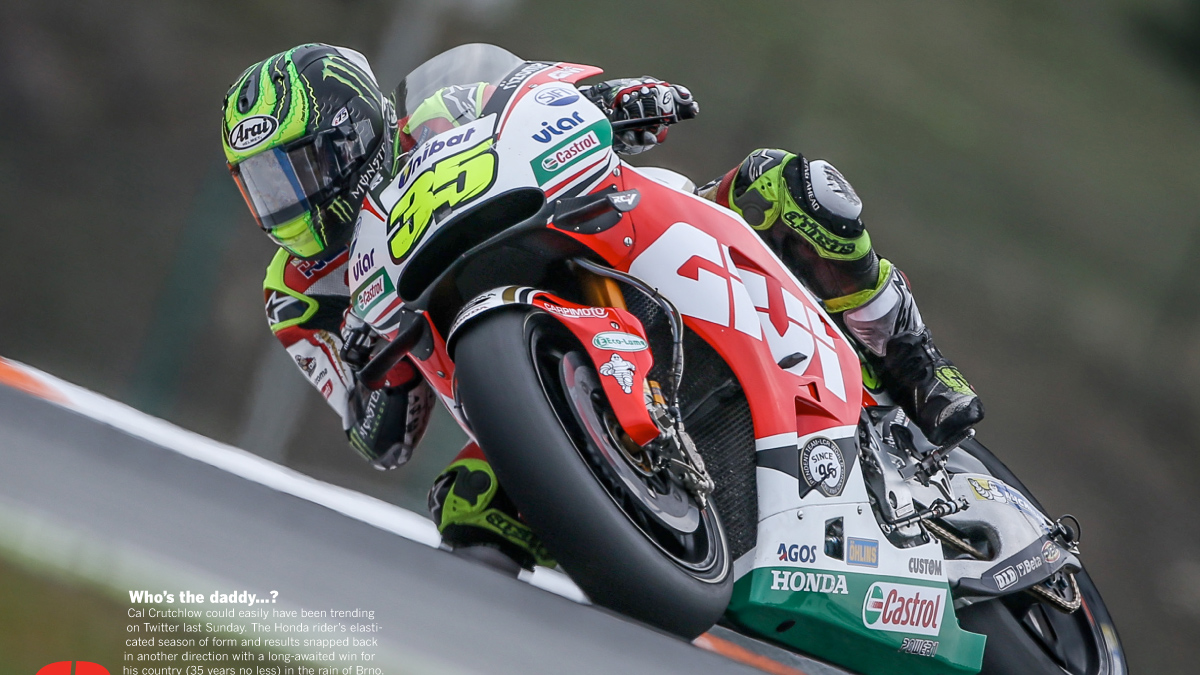 When Cal Crutchlow flew back from Brno to the Isle of Man on his privately chartered jet alongside Jack Miller and his sidekick Bruce the bulldog, he could probably be forgiven for feeling rather pleased with himself. Without any doubt, the spiky Brit has had a month to remember.

After taking a combative second place in the German Grand Prix, he and wife Lucy welcomed his first child Willow into the world. That was followed up by a maiden grand prix victory in the Czech Republic, a win so historic that it could well have changed the future for British motorcycle racing.

Two months ago at the Dutch TT, the 30 year-old discussed his young pal Miller’s first MotoGP win with a rueful smile on his face. “It’s taken me six years and I still haven’t won – and he’s done it in his second year! But if there was any other guy I would want to win, except for myself of course, then it would be Jack.”

Jack himself was ever so slightly less eloquent in his appraisal of Cal’s success on Sunday after having tipped up his pal on the morning of the race, “I don’t wanna sound cocky but hey told you so yeeww winner winner chicken dinner. Welcome to the club! 3 winners 4 races.”

However, the most pertinent point in Mystic Miller’s appraisal is the last bit. We have now had three new MotoGP winners in the last four races, with Andrea Iannone the third of those having taken long-awaited glory for Ducati a week earlier in Austria.

Apart from being the first British winner in the premier class since 1981, Crutchlow’s victory on the LCR Honda also represented the second win this season for an independent team, and considering that before this year there hadn’t been one since 2006, it is clear that something has changed this season in MotoGP.

Without a doubt luck has played its part, with tricky conditions to negotiate in Assen, Sachsenring and Brno, and the Red Bull Ring was a new addition to the calendar, ripe for Ducati to land on their feet. Let’s also not forget that there have been several satellite team podiums in recent seasons – whether for Crutchlow or the likes of Smith, Petrucci, Redding and co. So the top step hasn’t been that far away on occasion.

Despite all that you can’t argue with the facts. The rules and conditions are the same for everybody, and arguably the factory teams have the resources to deal with those kinds of things better. There have been loads of mixed-condition races in the last ten years since Toni Elias’ famous win in Estoril 2006, so to have two new privateer winners in the space of two months suggests this is different.

In my opinion the changes in electronic regulations and the change of tyre manufacturer has seen a closing of the gap at the elite level, and as such the Grand Prix Commission have delivered exactly what they promised. The factories still dominate in the main, but the opportunity for a lesser-funded squad to enjoy the odd success is there.

It might not last too long however, as the electronics are dialled in on a weekly basis and Michelin get a better handle on things. There were some critics of the French manufacturer on Sunday after shocking images of Andrea Iannone’s front tyre, which followed major issues for Dovizioso, Smith and Lorenzo. The latter was criticised in turn for his own performance, but the Spaniard had believed that the chunks of front tyre slapping against his fairing was the engine failing – hence his reticence to get back out on track with his first bike.

Michelin can’t be blamed for Sunday however. They provided a front tyre that was capable of surviving the race, it’s just that the majority didn’t pick it. Teams were told before the race that the soft tyre was probably not going to reach the end – especially at Ducati – and most still took the decision because they expected to have to change bikes at some point.

Ducati did suffer, and I’m not sure how much of that is down to those oft-discussed winglets. The slight increase in front-end downforce they create may go some way to explaining why after having had four Ducatis in the top four after nine laps of the 22-lap race, it was Loris Baz who eventually finished best for them in fourth – the only other rider apart from Crutchlow to have gone with the hard front, hard rear combo.

As for the Brit’s decision, it was a calculated bet. Similar to the one he took the evening before his first GP victory when he was railing vociferously against HRC about providing a bike which everyone could ride and not just Marc Marquez. Once again he went with his gut-feeling. If one thing has become clear over his 98 MotoGP races, then it’s the fact that Cal has more guts than most. He might just have added more weight to his gutsy demands by becoming the sixth winner of this bizarre season.