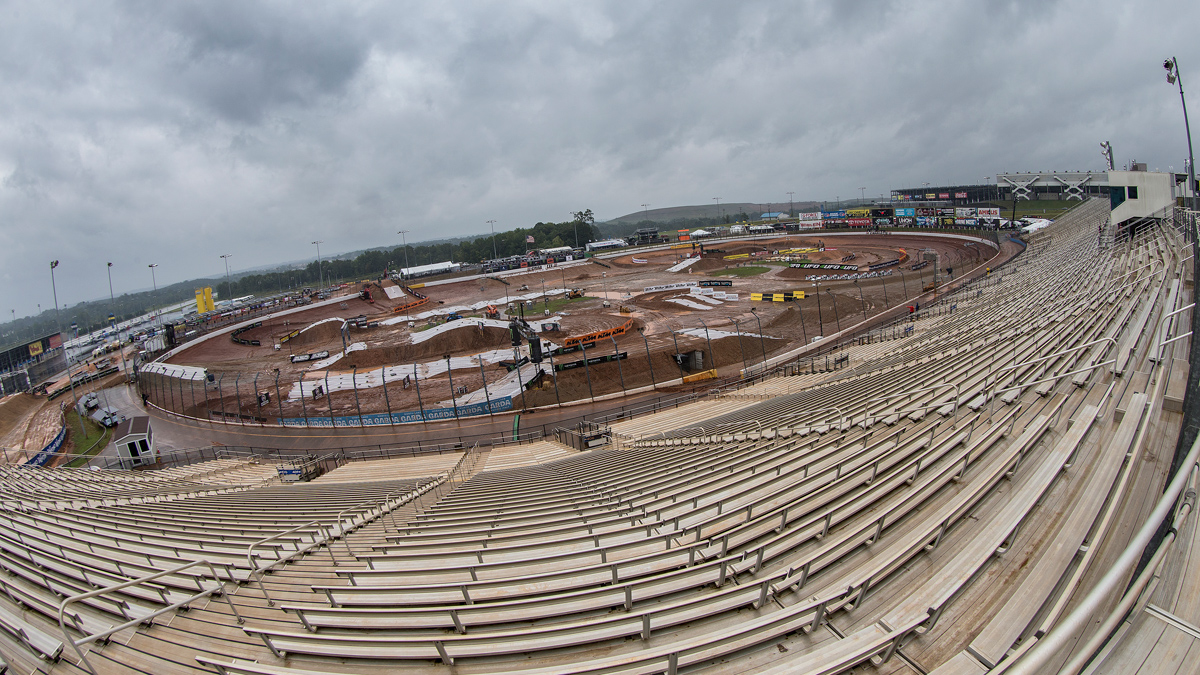 I didn’t go to the Charlotte USGP so I’ll let Adam fill you in on all the minutia of the event but here are some thoughts from the couch on that even as well as on Roczen and more.

– I’m unsure on the circuit. I’ve never been a fan of the man-made tracks like we saw in Charlottle, over here in Salt Lake City even Lake Elsinore; which was a track already but featured no elevation and was specialty made for the national. I thought the MXGP guys have done well in places like Switzerland and Holland but the MXDN in Donnington, England I didn’t like and same with Charlotte. It’s hard to replicate a motocross track when there wasn’t one there and elevation always helps. The track in Charlotte lacked passing places and seemed pretty tight in many spots. I get what promoters on both sides of the pond are going for in building tracks where there were previous none but the jury is out. They do get bonus points for having it on a Saturday night though. That was cool.

-Too bad that in the MXGP class Tim Gajser fell in the second moto as it was shaping up as a great Eli Tomac/Gajser battle. Gajser played it pretty safe the last few motos while he worked on clinching his first MXGP title but in the second race he showed the American fans briefly how fast he is. Also a shame that Justin Barcia hurt his wrist and was forced out of the moto as he rode well the first time out to get second.

Tomac was a force though. I didn’t think the man-made Charlotte track suited his style (he’s more of a pin it and softer terrain kind of guy) but ET showed he could adapt with dominating wins in both motos much to the delight of Monster, Kawasaki and everyone else in green.

-What a ride in MX2 by Cooper Webb. His second moto charge was pretty amazing and fueled by the home crowd, Webb took it to the front. Amazing ride and he captures the MX2 class with 2-1 finishes to Jeffrey Herlings 1-3 and Austin Forkner’s 3-2. These results won’t stop the bench racers of the world from continuing to yell and scream online about which series is better and I won’t go there. Both Herlings and Webb are amazing world-class racers and I’m excited that both are finally making the jump to the 450 class against the very best.

– Herlings made me chuckle a bit and my buddy Chad Reed came to his defense when I tweeted that “Herlings makes a whole bunch of excuses (some of them valid) then says “No excuses” LOL” because after the second moto Herlings said that the time change affected him, the lack of time on the bike affected him, his repaired collarbone affected him but he was making “no excuses”. But the previous three or four things were exactly reasons why he thought Webb beat him! And as I said some of those reasons were valid, he HASN’T been on the bike that long, etc, etc it’s just funny to hear it the way he stated. And he won the first moto so clearly, he was VERY good there right? I guess where you stand on it depends on whether you think “reasons” can be “excuses” and vice-versa. I hear this all the time over here from racers also; rare is the athlete that can look into the camera and say ‘I got beat’. I get it but I just hadn’t heard someone with so many “reasons” like Jeffrey had.

-I wrote this last week “But it says here that watch out for Pro Circuit’s Austin Forkner who’s been better than Webb the last couple of weeks and just won his first 250MX national. Webb’s the champ but Forkner, he may well use his youthful exuberance to make a statement this weekend” and wouldn’t you know it, Forkner was close to winning both motos! A fall in moto one stopped a sure win (in my opinion) and in moto two it took a heroic ride by Webb to stop him from winning again. The rookie just about stole the show from the stars of MX2! Confidence is everything and I’m sure Austin’s ride opened some eyes of people from around the world.

-I was asking the Honda USA guys about the Martin Honda boys debuting the 2017 Honda CRF450R at Charlotte under Evgeny Bobrhyshev and they were pretty surprised that Honda Europe had enough parts! They had one bike and not a lot of spares so the USA guys were a bit puzzled about what would happen if there was a wreck. As it was, Russian Bob put in a nice showing in the second moto to get the bike off to a nice start.

– Speaking of Honda, we know Ken Roczen isn’t racing either USGP or the MXDN as he’s switching to Red for 2017 and beyond. Roczen’s missed the Olympics of Motocross the last few years with injury or in the case of 2014 and this year, he’s switched teams. Roczen’s done the rare double of taking a number one plate to another team twice now and if history is any indication, he’ll start Anaheim 1 2017 with a bang. The #94 took his brand new RCH Suzuki ride to the win at his very first race for the team and was leading the points before casing a triple in Oakland and hurting his ankles. But – and there’s always a but right? – Roczen was familiar with the Suzuki RMZ450, how’s he going to be on an all-new Honda? His adaptation to the new machine and whether he can keep his roll going is to me the most fascinating storyline over here for 2017.