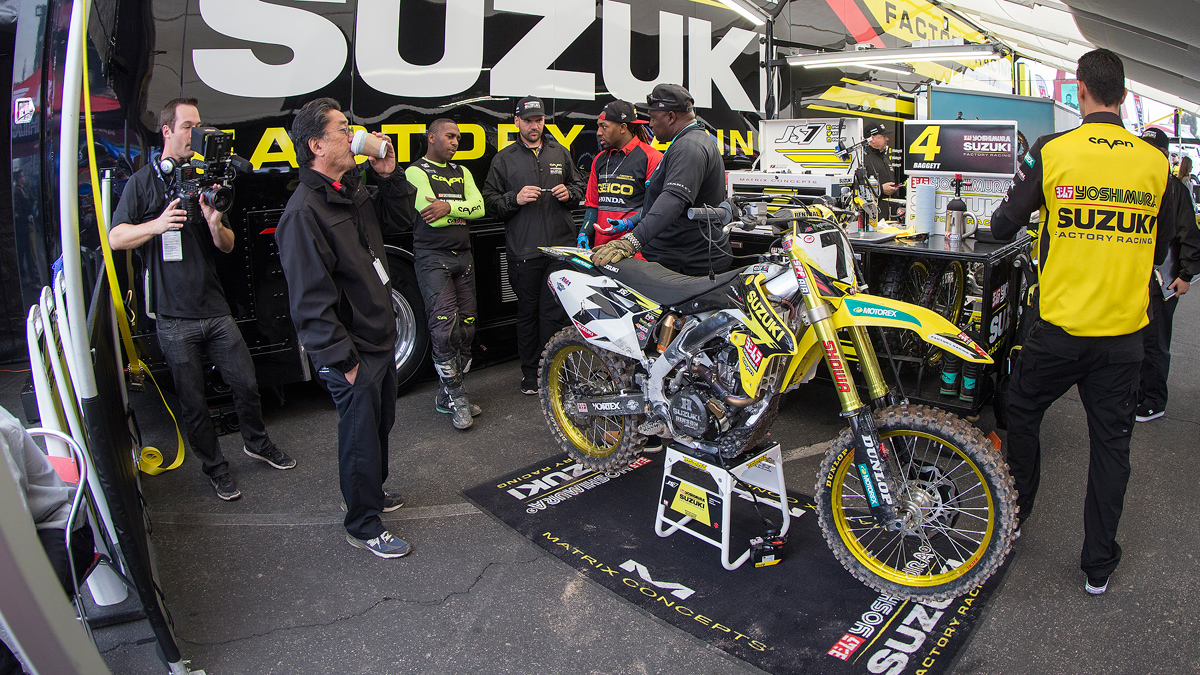 It’s an interesting time in American motocross. The depths of the economic depression were deep a few years ago but for the most part, the racing world has rebounded from that. Salaries for riders and number of rides aren’t where they were in the late 90’s-early 2000’s but it’s better than it’s been for many of the riders lately. This year though there are a number of great 450 athletes that don’t have anything lined up for next year.

There are two spots left at RCH Suzuki and most of us figure that Broc Tickle and Justin Bogle will get those factory RM-Z’s for 2017 and there’s one spot at JGR Yamaha but that still leaves riders like Justin Brayton, Dean Wilson, Jake Weimer, Weston Peick, Kyle Chisholm with nothing. That’s 450SX podiums, 450SX heat race wins, 250SX/MX champions all with nothing. Shocking times indeed with way more 250 rides available as teams put greater importance on potential than actual results.

Above all these riders lurks James Stewart and to a lesser extent, his brother Malcolm. Neither rider has anything on lock down for next year but signs point towards Malcolm getting a GEICO 450 Honda factory bike for 2017 in a similar deal that the team found for Bogle last season and Eli Tomac the year before.

But what about his brother James? The third winningest rider of all-time and a rider that at times showed us some incredible feats on a dirt bike? Of course we all know his story, suspended for a year by the FIM for not getting an exemption for his Adderall use and then last year suffering through a winless (almost finish-less!) 2016.

Stewart was heavier, he was slower and really was a shell of his former self that we saw in 2014 when he won five 450SX races. It’s unbelievable to me the ‘fall’ he had this year. We’ve always seen James be a front runner in any race he’s ever been in but in 2016, it was a struggle to just reach the flag.

That’s in the past- what’s the future? Well, I really have no idea. Seriously. I’ve been getting heat on social media by MX fans for “holding out” on what JS7 is going to do. As if they cannot believe that Stewart doesn’t have a ride for next year and I know what he’s doing but not sharing. To that I say: “I wish I did…” I think there’s a real possibility that we’ve seen the last of James Stewart out on the track.

His Yoshimura Suzuki team folded up and is just going to offer technical support to yellow teams and I know there was a push by the Stewart brothers to get some factory bikes from Honda under the GEICO banner and run their own team for 2017. James himself had some talks with Mike Larocco of GEICO about wanting to get back to the top but that deal isn’t happening. Partly because of Honda unable to supply factory parts because of the new 2017 CRF450R and it being all-new and the factory in Japan having suffered damage from an earthquake there a while back. And partly because I think it didn’t make financial sense for the GEICO guys.

If you’re James Stewart you have to get factory bikes/support for yourself right? Well, KTM, Husky won’t have anything to do with him, he’s not going back to Kawasaki or Yamaha (apparently there was an ‘ask’ by Suzuki to JGR that in return for bikes, they take JS7 that was rebuffed) and that leaves Honda. But as we said, that doesn’t seem feasible for Honda or GEICO.

There are those RCH spots and perhaps Suzuki makes RCH take Stewart for 2017 but with Ricky Carmichael not being a fan of James going back to their racing days, I can’t see that happening. Besides, it was well known that Stewart was not a fan of his RM-Z so not sure this matches up

I think the only way we see the #7 on the track is if he invests in himself like his buddy Chad Reed did for the 2010 season. Reed was a lot like Stew back then in that he was undesirable for the factory teams. He wasn’t happy at Kawasaki and had burnt bridges at Yamaha and Suzuki liked him but had no money and Ryan Dungey. Reed took a Honda, started his team and got back into the good graces of just about everyone.

Even if Stewart takes that route and starts everything up, I think deep down he has to ask himself if he really wants to race? It was obvious he wasn’t prepared in 2016, his mind knew what to do but his body couldn’t and he ended up on the ground more times than not.

IF he wants to race he’s going to have to work harder than ever to get back into the shape he needs to be to be a front-runner. The skills are still there – that kind of talent isn’t ever going to leave you – but he’s older now and needs to work.

And honestly, I don’t know if he’s willing to do that. He’s got his legacy, his titles, the highlights—maybe that’s how he should leave it. Then again the sport is better with Stewart out on the track. It really is. You’d have to be there to explain it I guess. But if he’s going to mail-it-in like 2016, then I’d rather he not ruin this movie for me any more.