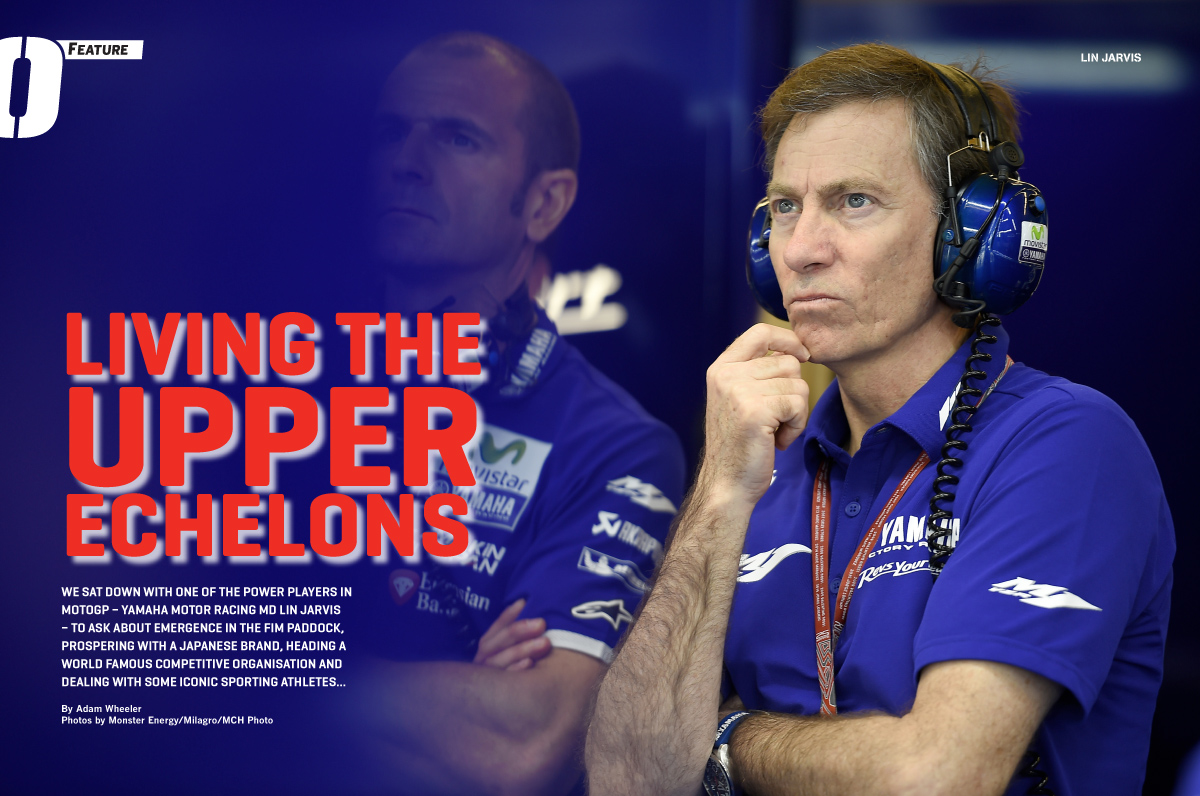 Rising in MotoGP: Lin Jarvis talks life at the top

Lin Javis may have been born in a blue shirt. The 58 year old has spent a career with Yamaha and filtered through many different departments to create and head Yamaha Motor Racing for the last decade; essentially the Movistar Yamaha team with Jorge Lorenzo and Valentino Rossi as star riders and with Spanish hotshot Maverick Viñales coming in for 2017. The Brit is regarded as one of the power players in the MotoGP paddock and the visible western face of a brand that is instantly recognizable and has enjoyed fantastic success in the last ten years thanks to ‘99’ and ‘46’ and their seven titles.

Eloquent and articulate Lin is also a careful and considerate talker; a man well versed in the need for the right words at the right time. He is undoubtedly the leader of the world championship winning team but he is also an ambassador and a figurehead. As MD Jarvis also needs to be someone who can pick and nurture talent, manage a multi-national crew, close important sponsorship deals and direct Yamaha’s costly activities at the very heights of their racing program. The skill set and the pressure do be able to effectively enact his job could be applicable to the top level of any kind of business or field.

Speaking in his small dark office within a spacious Yamaha hospitality unit, Lin is pleasant company and a nuanced veteran of the interview process. Rather than asking repeated insight on his riders or exquisite M1 racing machinery we are curious instead as to how he rose to his position and what it takes to keep a behemoth like Yamaha on the road, in the races and on top of the box…

How many years now in the MotoGP paddock for you in one role or another?

Well, I came into MotoGP in January ’99. Prior to that I’d been working with Yamaha Europe and doing a variety of different functions including marketing, communications, corporate communication, racing but then not always in MotoGP. That was managed by other teams in particular Wayne Rainey and there was also the WCM team. I started being responsible for the activities here in January ’99, and that came about because in ’98 Yamaha decided it was time to take control of their own destiny again and Wayne Rainey stopped with team management. Yamaha took over the assets that he had: basically a team based in Amsterdam…and Yamaha Europe was also based in Amsterdam. So from that moment we created Yamaha Motor Racing. I started that company and that project.

If we backtrack a little bit more, how about your origins with Yamaha?

That’s a long story because I’ve been involved with Yamaha basically all my career. I used to work in the UK for what was then Mitsui Machinery Sales. For about six years I was working there. Then I got bored and decided I wanted to work in Europe. So I left the company and just took off and tried to get a job and traveled in Europe alone. It was interesting…but didn’t work out! So I went back to England and then I approached it from a different angle. So after I traveled through Belgium, France, Italy, Switzerland for many months I then went back and I thought well, when I left Yamaha UK, Yamaha Amsterdam always said ‘if you ever want to reboot, give us a call’ because we had a good relationship. So I did and in 1983 I went to live in Amsterdam. When I started I was actually working in the competition department. I was handling bicycles and BMX. After doing the bicycle business for about a year and a half I became an area manager, responsible for competition bike sales, which then were quite a lot because we were selling YZ motocross bikes and enduro bikes. Selling a lot of TZ road racing bikes also. So I became involved and responsible for the sales of the competition bikes then Area Manager for Northern Europe for regular motorcycle sales. I got involved more and more in communications and racing was then brought back to me. I was responsible, in particular, in those days for motocross. So it started with MX, including way back in the days of Hakan Carlqvist and Danny LaPorte and all those guys. Jacky Vimond was my first ‘charge’ that became world champion. So that was ’86. And then actually I brought [Michele] Rinaldi to Yamaha. I tried to convince him to leave Suzuki and come to Yamaha. The first year we didn’t succeed. The second year we managed to get Michele to come over. So I have a long history in motocross and also in trials. So I’m like a dinosaur basically! I was involved in motocross and then also part of Dakar, and then Superbike came on board. So one way or another I’ve been involved and engaged in racing for many, many years.

How long were you living in Amsterdam?

Then Yamaha Motor Racing made the transfer to near Monza in Italy?

We set up YMR in the Netherlands and so I ran the company there for five years. The initial phase was 500GP in the beginning, which then became MotoGP, but after two years we then took over Yamaha Europe’s racing activities as well. So under YMR we were running superbike, motocross, enduro, and basically everything else including road racing. At a certain moment in 2004, which was effectively when Valentino joined us, the MotoGP program became more and more important. We’d already stopped superbike by that stage. Whilst the company was based in Amsterdam it wasn’t really the ideal choice for a racing operation. So we used the facilities we had in Italy to gradually place more and more of the actual team activities and the logistics. And then Valentino came on board and we stepped up our program significantly. It just made so much sense to actually focus and dedicate YMR to MotoGP and we shut the company in the Netherlands. We closed it and we reopened a new Yamaha Motor Racing SRL in Italy in January 2005. So I moved there in ‘05 and then in 2007 we made the major change of completely revamping the whole building and everything else. In November 2008 we opened YMR as it exists today.

For you personally then – having more than two decades in the Netherlands – it must have been another part of the learning experience or broadening of horizons to go to Italy. You’ve worked with multinational people so you have a good understanding of how different cultures are…but living in another country is another thing, isn’t it?

Yeah. Perhaps it might have been possible to live in Amsterdam and to try to run it from there but it would have been difficult. If you really, really want to get engaged and really do a good job you need to commit yourself 100%. So I moved there with the family in January 2005 and have enjoyed it. It’s good. I’m still living there now, so it’s almost 11 years. But Italy is a very, very different country to the Netherlands in so many ways. Culture shock? I don’t know if they are the right words but massive cultural difference, I would say. The Netherlands is a much more transparent environment in which to work, much more based on trust and relatively simple from an administration point of view and from a bureaucratic point of view. Italy is the opposite in every possible way! That’s the negative side. The positive side is the Italians are extremely passionate about motorsport, extremely creative. There’s a wealth of knowledge and expert manpower available and of course you’re much more centrally based for your activities. As you know working in the MotoGP or motocross or Superbike then Italy is the other hub, really. You have Japan and Italy and Spain. For Yamaha, we chose to go to Italy because we had facilities. So certainly in the beginning it was pretty shocking, I would say, to find out about running the business there. But as I said, the positive side is that there’s so much energy and you find solutions. It’s been a really positive move I think for me personally but also for the company. Since we went there in 2005 we’ve been fortunate enough to obviously win seven world titles in that period of time, so it’s been a pretty positive experience.