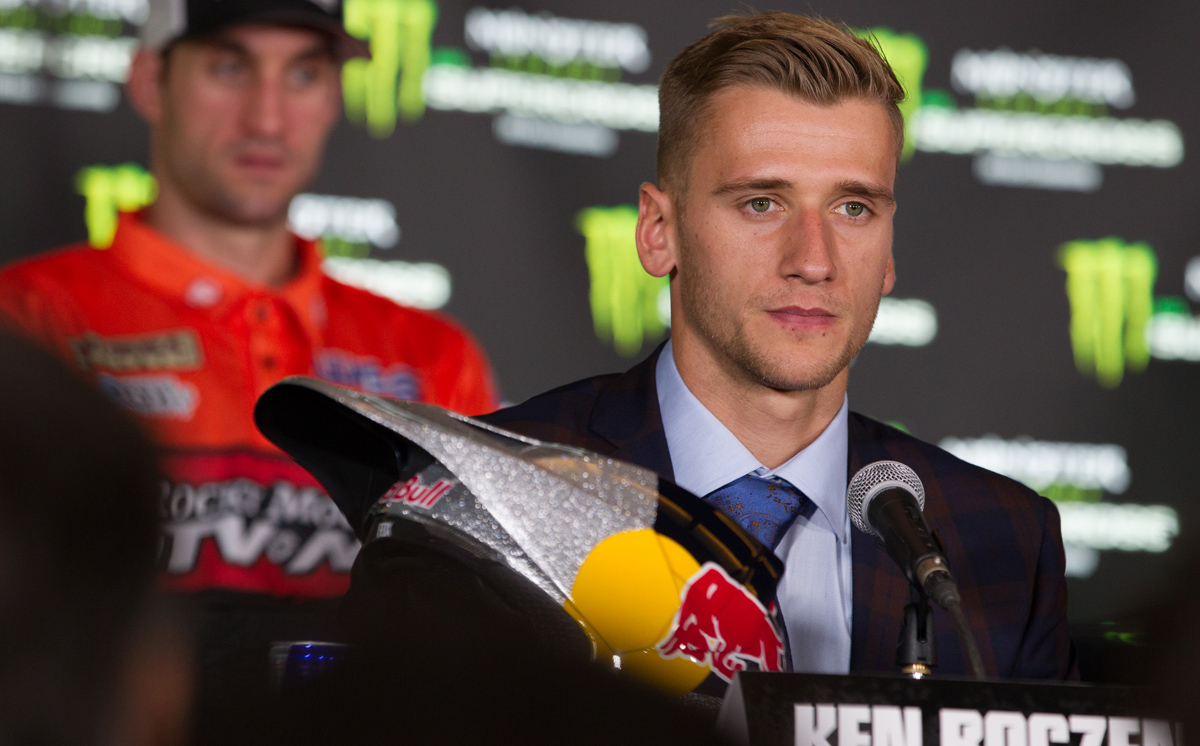 Ken Roczen showed up to the annual AMA Supercross Anaheim season opener pre-race press conference dressed to impress. But while the Team Honda HRC rider had tongues wagging by waltzing in with a tailored suit instead of the expected team gear, he let his performance on Saturday night do all the talking. Roczen’s third Anaheim I win in four years (and with three different teams/brands) was an absolute masterclass performance. He led from start to finish and crossed the line an impressive 16.2 seconds over rival and reigning champ Ryan Dungey.

Roczen set the tone – a calm, poised, collected athlete who knocked down the laps on a track where cooler heads prevailed. It certainly made a statement.

It’s your third win in four years here. Do you feel any different as far as your prospects for the championship after this one?

It’s the first race, but I just stayed really calm. I think that’s why in the previous years I kind of got a little too excited in the beginning, but really keeping calm and loose and just keep my eyes on the prize and click off each and every weekend. I think it’s important to take this race and enjoy tonight and tomorrow, but it’s important to look ahead and focus on the next race and not get caught up too much with the last one.

Did you expect to get the reception that you got and people making a big deal about you showing up in a suit on Thursday?

Yeah, I kind of thought that people were going to think that it was different. But I just feel it was the right thing to do. I want to elevate the sport, try to take it up a notch. All the other big sports that people love, and that are pretty much bigger than us… I just want to burst the bubble here and hope that people catch on to it. That we start looking professional, respect the media, because we’re getting dirty and sweaty tonight, but on Thursday there’s no real need to. I was happy to get my custom suits from Stitched, I put that together a while ago. It felt good to wear nice things.

How was the dirt out there once everything raced in, was it easy to over-ride the dirt or did you have to keep it down a notch to make sure that you kept traction?

Absolutely. I thought it was going to get really good but it seems like from the stuff that they’ve mixed in in the morning which looked like we needed it, there were no lines and it was just really crumbly. So I wasn’t really too stoked with the dirt, to be honest, but it’s the same for everybody and you just kind of need to adapt real quick.

Not really. I was kinda doing the same thing the entire time. I tried to find something different in the whoops, just a little bit of a different rhythm, so I tried to kind of jump it one time and that didn’t work out at all. So I lost a little bit of ground and I just went back to what it was doing before and just took my time and tried not to rush them. Like Ryan [Dungey] said, they got really steep and like a curve. So if you messed up it could give you a pretty good kick and you might find yourself on the ground. So I just kind of kept doing the same thing I was doing. I felt like I could have gone actually faster then, but at the same time there was no need to really push the envelope.

It’s technically your first race on the bike. You raced Monster Cup, a different type of Supercross track to here. Is there actually stuff you learned today since it is one of your first runs on it? Is there room to improve maybe?

Totally. I was hoping we would have a free practice because I haven’t ridden since Tuesday so that’s kinda long time. It just took a little bit of time to get used to it, especially coming on a track like that. It was really soft obviously in practice. Just kind of weird a little bit. But I wasn’t stressing about it at all. I just made some tiny little adjustments and it worked out good. I wasn’t really messing around with the bike too much because I’m really happy where I’m at. But at the moment I’m just having a lot of fun. The team is good and they’re working hard. It’s all the details that make me super-happy. Right now there’s really nothing to complain about.

Is this the type of race you like? To get out front, run your own race or do you prefer to have a battle?

It’s a bit tough because sometimes you have a bigger gap and you tend to make little mistakes but it was nice to obviously have a gap. It just gives you a little bit of breathing room, but also there is enough time for error. Sometimes when you’re battling with somebody it keeps your focus a little bit sharper but I had no problems tonight with that. It was fun because you couldn’t really over-ride the track so I wasn’t breathing hard or anything. It was one of those races that could have just kept going. It was good but I think in the near future we’re going to see tracks a lot more tacky and we can push more. It’s going to be a lot of fun. It was definitely a little bit of a different Anaheim than I’ve seen before.

You made a sixteen second gap with the win. Did you expect to come in so dominantly?

It’s hard to expect something like that…but I can tell you that I had no doubt in my mind, and that’s ultimately what helped me out a lot. But at the same time there are a lot of good guys out there. That’s what I mean the entire time with keeping the focus. That’s what I’ve done. I never got too excited. Just tried to stay calm and trust my capabilities.