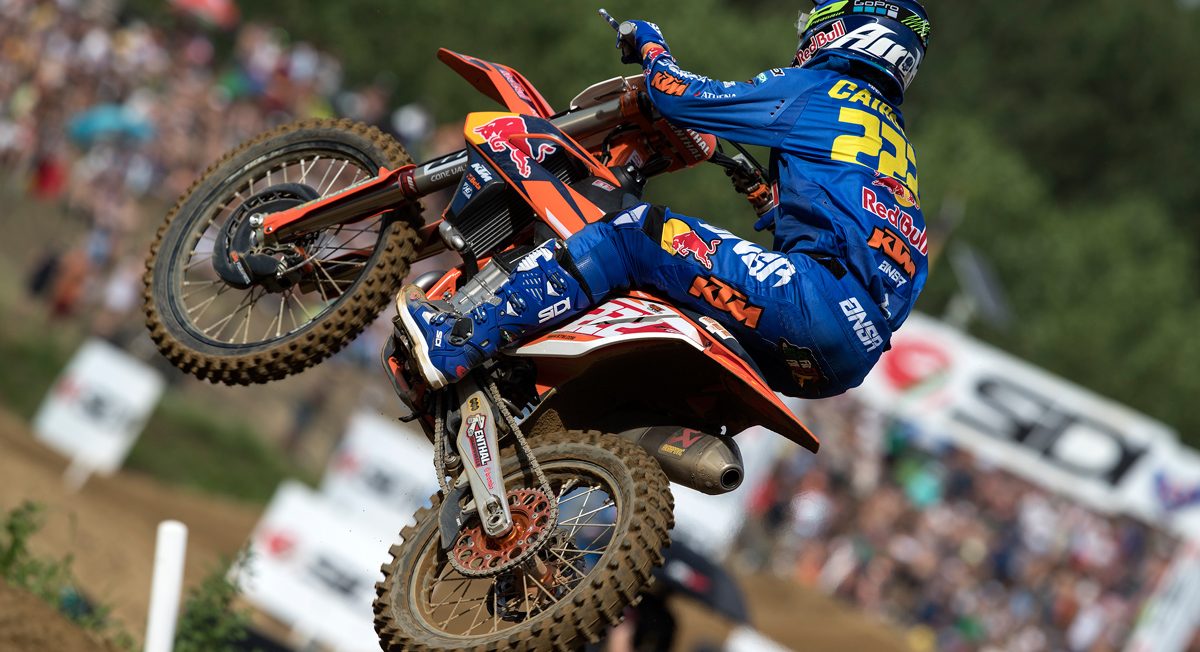 Cairoli gets down, dusty and damn quick again on home turf
24th June 2017

The 2017 FIM Motocross World Championship has been a series of extremes. The tropical rainstorms of Russia gave way to choking heat and humidity in northern Italy and round eleven of MXGP. The adverse conditions around a frankly excellent sandy layout making its bow as a Grand Prix host were but a temporary bead of sweat on Red Bull KTM Tony Cairoli’s back.

I’m not sure where the #222 – wearing fetching new blue Answer Syncron kit – rounded the first turn of the afternoon Qualification Heat but it was almost last in the 34-strong field. While Rockstar Energy IceOne Husqvarna’s Max Nagl, Suzuki’s Arminas Jasikonis and Red Bull KTM’s Jeffrey Herlings took turns to set the pace (Herlings was closing on second spot at superior speed until he buckled a front wheel and had to pit for a change, classifying 20th with lap-times seven seconds quicker than those around him) Cairoli stealthily moved up the order. The ride was cheered by a generous crowd and was vaguely reminiscent of his monumental comeback at Arco di Trento for round five and the last chase on Italian terrain. On this occasion he hit the front on the penultimate lap for what was a fourth pole of 2017 and with the impressive Jasikonis and Rockstar IceOne Husqvarna’s Max Anstie in third.

“I took it easy in the beginning and looked at the race pace of the leaders…but this is a track where you can make a pass,” said Cairoli in the Saturday press conference before then launching his RACR lifestyle brand and collection of t-shirts (4), sweatshirts (2), caps (5) that same evening. “It will be more difficult in the heat tomorrow with ten more minutes [per moto] and the track is getting rougher. It will be a tough race. It is one of the hottest races we have had…but I like the hot weather and I can handle it.”

Cairoli commented favourably on the track and smiled when asked if he’d raised expectations with another thrilling flight from the nether regions of the pack. “For the fans it is better but for us it is already very tough so we don’t want to make it more difficult by starting in fifteenth place or crashing!” he said. “This track is better for a bad start than Arco because there are places to pass! And you can push a bit harder than others. At Arco everyone seems more or less the same speed. It will be important to make the start, ride at your own pace and use as little energy as possible to stay at the front.” 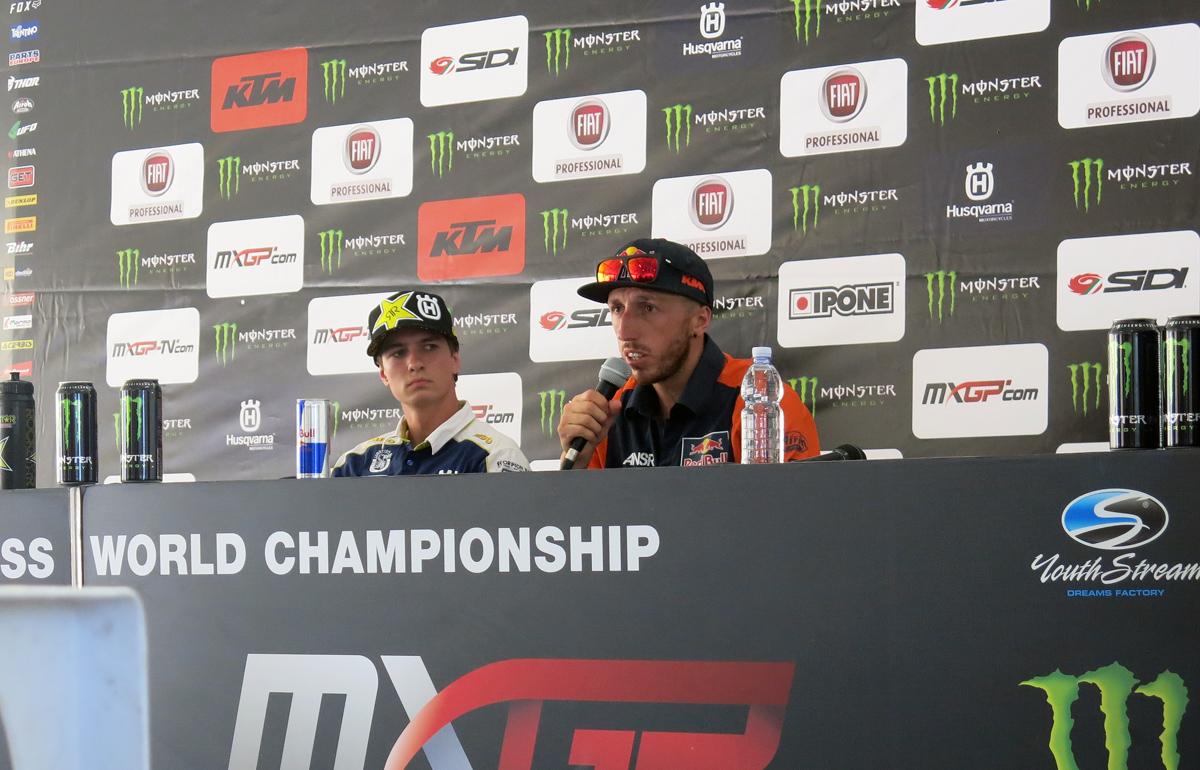 MX2 was in the capable hands of Rockstar Energy Husqvarna’s Thomas Covington with KTM’s Pauls Jonass and Covington’s teammate Thomas Kjer Olsen in third, ahead of Hitachi KTM UK’s Ben Watson with a personal best fourth. “The race went exactly to plan and I found some pretty good lines out there; it was a good for the confidence,” said Covington who also confirmed he will stay in Grand Prix next year and has allegedly agreed to remain as part of Jacky Martens efficient Husky squad. “The track was physically demanding but I’m used to racing in the heat; it will be interesting tomorrow.” 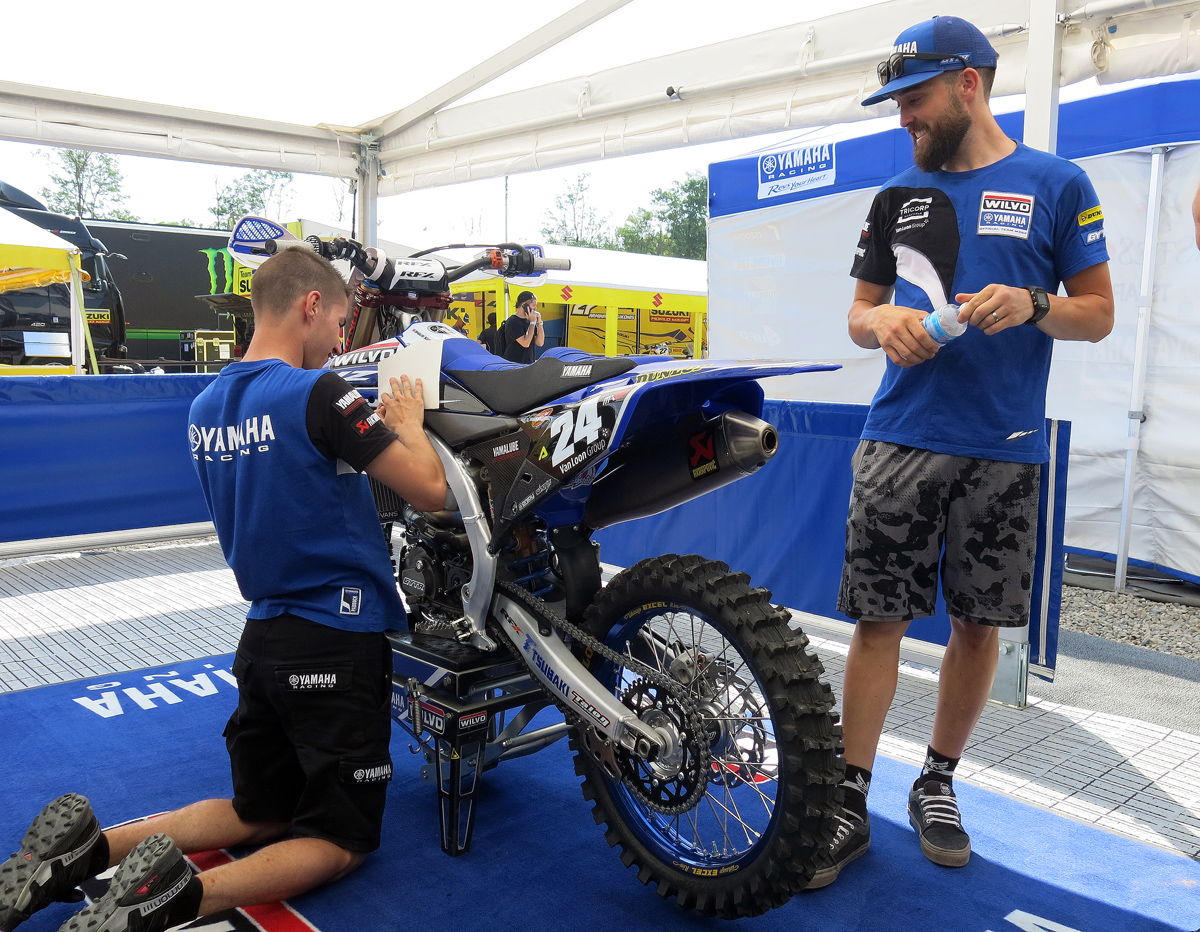 Wilvo Yamaha’s Shaun Simpson made a Grand Prix return after recovering from a broken left hand but the Scot’s presence in MXGP lasted one corner of the Qualification Heat. #24 tumbled on the exit of the first turn and was hit by several pursuing riders leading to another trip to hospital. A broken left arm and chipped elbow means the second operation this season needed for the luckless Scot and another six week wait. He is due for surgery tomorrow in Belgium.

World Champion Tim Gajser was another returnee and the Slovenian was conservative in his first fully fit Qualification outing since crashing out of the lead in Germany last month. 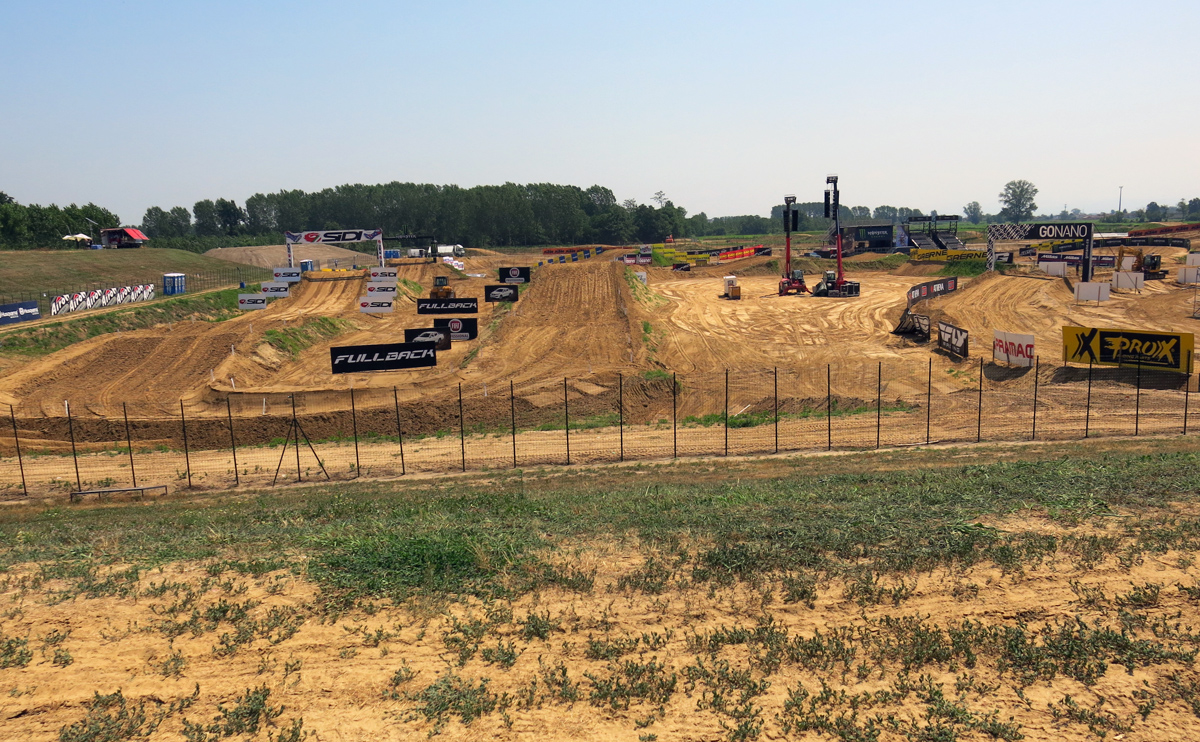 With regards to the site it is hard to think of too many other facilities with the same kind of thought and resources poured into making essentially a compact and simplistic circuit up to GP spec. It was easy to be rapt by Ottobiano Motorsports on Friday. Some environmental wrangles with Maggiora Park led to the adoption of Ottobiano as the host of the Italian fixture (switched to a ‘Lombardia’ tag to reflect the region) and it was no surprise to see the same level of organisation and attention invested in creating an event worthy of the status of a ‘Grand Prix’.

One frustration that was voice by the riders – and by no means particular to Ottobiano – was the ramshackle approach to the living area with those Grand Prix athletes arriving Friday afternoon struggling for space with the hoards of EMX125, EMX250 and EMX300 competitors. The MXGP and MX2 select then bore the inconvenience of being woken by revving two-strokes at sunrise with the first session for the 125s starting at 7am. 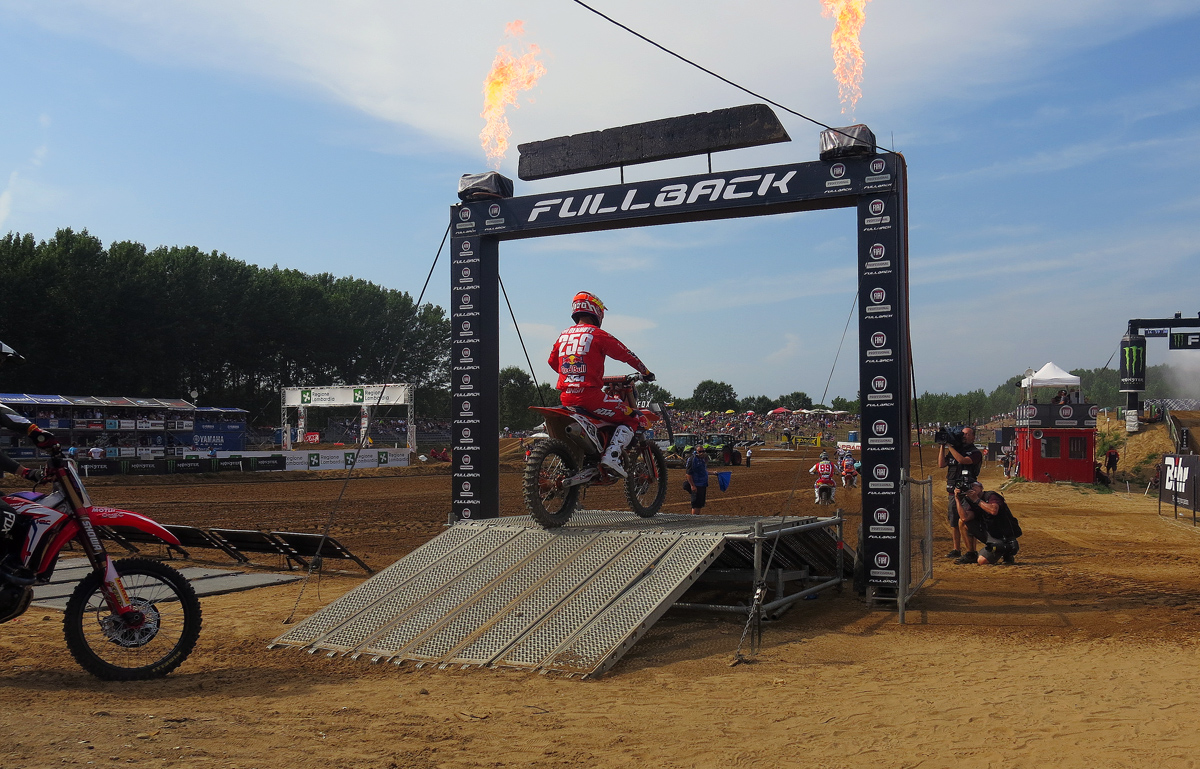 There is part of me that believe MXGP needs a certain slice of exclusivity. European Championship riders can race the same circuit and exist in the same facility as those at the peak of the FIM World Championship and there are definite advantages to being a strong part of the Grand Prix support programme (development, exposure, more races for the fans’ buck). But there should also be something to strive for. Having a separate, established, well connected and practical area solely for Grand Prix riders to park – the stars of the show – should be one element of every circuit map when it comes to planning. Fans and visitors enjoy excellent access to the main ‘characters’ of MXGP in the paddock but this is small ‘accommodation’ that could be effective in several ways.

On the subject of the riders themselves a rather meek silly season was still active at Ottobiano and racers both active and inactive were circling team awnings with intent. Rumours virtually fixing Clement Desalle with Monster Energy Kawasaki for an extension to his two-year stay meant attention fell mainly on others. Little is known of Jordi Tixier, Tommy Searle and Glenn Coldenhoff’s status with Kawi and KTM respectively while gossip had Max Nagl departing the Rockstar Energy IceOne set-up after three years. Jeremy Van Horebeek is expected to agree an offer with Monster Energy Yamaha that has been tabled for several weeks and will keep the Belgian in blue for a fifth term but is still unconfirmed. Yamaha did make an acquirement in Ottobiano by allegedly tying Wilvo Yamaha’s Arnaud Tonus to the presentable Dutch squad for another two years.

Youthstream presented a brand new concept for the Italian Grand Prix thanks to an agreement with the new forward-thinking organisation at the Imola circuit to mount a race similar in style to Assen with a temporary motocross course draped across the historic asphalt and oppostite/around the Rivazza stand. Imola will be the final date of a provisional calendar expected imminently and with a rumoured launch for 2018 at Neuquen in Argentina. When asked about the prospect of MXGP heading back to Losail, Qatar after a five year stint as the opening slot Youthstream President Giuseppe Luongo was unequivocal. “We have been talking for several months but could not reach an agreement and the organisation faced some budget cuts,” the Italian said. “For this we will go to South America to begin the championship before coming back to Europe.” Luongo also rubbished talk that next week’s Grand Prix of Portugal will be axed in the wake of deadly fires that have ravaged the central zone of the country.