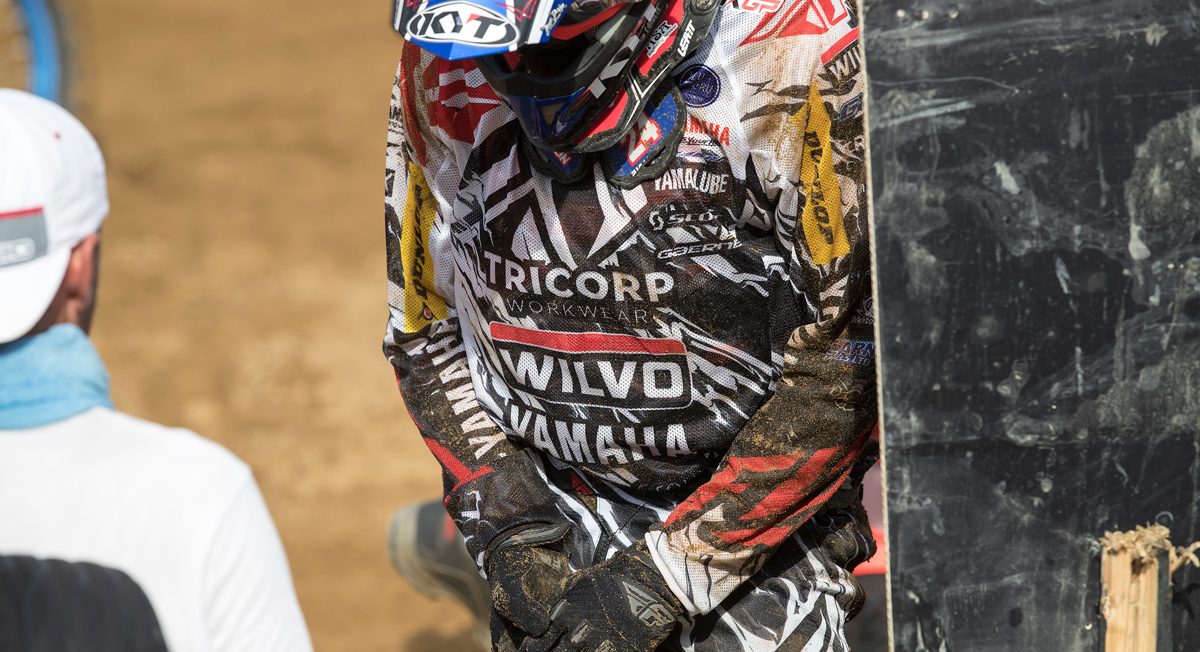 A different way to deal with pain

MXGP riders are just a little different when it comes to snaps, strains and pain
11th July 2017

Watching from the pitlane as Shaun Simpson somehow quickly took off his lid with one hand and resignedly walked away behind the start gate of the Ottobiano circuit, mouthing the words “it’s broken…” to his team was again a reminder of not only how harsh a sport motocross can be, but also made me curious about how a professional athlete in this discipline can be so tolerant, immediately-understanding and already forward-thinking in the minutes and seconds after a significant amount of trauma to his body.

The Scot, who coincidentally features quite prominently in this issue and remains an OTOR favourite for being able to articulate his profession and lifestyle with such lucidity, subsequently filled a limb of his body with more metalwork the following day. Only a few hours prior to the crash that left a radius bone broken and chipped as well as a fractured ulna, Simpson had been showing us the large bump in his left hand; a consequence of plates and screws inserted to join together three pieces of a shattered metacarpal. By Sunday evening the ‘Meccano’ effect had been doubled with another eight screws and fixings.

Simpson had already set himself a plan by the time his operation had been scheduled and painkillers were wearing off. But there have been more extreme examples in the last few years. The antics of both Clement Desalle (2016) and Tony Cairoli (2015) to continue competing before broken left arms had sufficiently healed almost defies belief. Desalle rolled to Qatar for his Kawasaki debut just two weeks after fracturing his arm below the elbow and while the first Grands Prix of the season were torturous and he was often ashen-faced trying to get through the motos (while also attempting to deal with the disappointment of the setback) he somehow made it until round five in Mexico where he started to enter the leading group and post top five results. 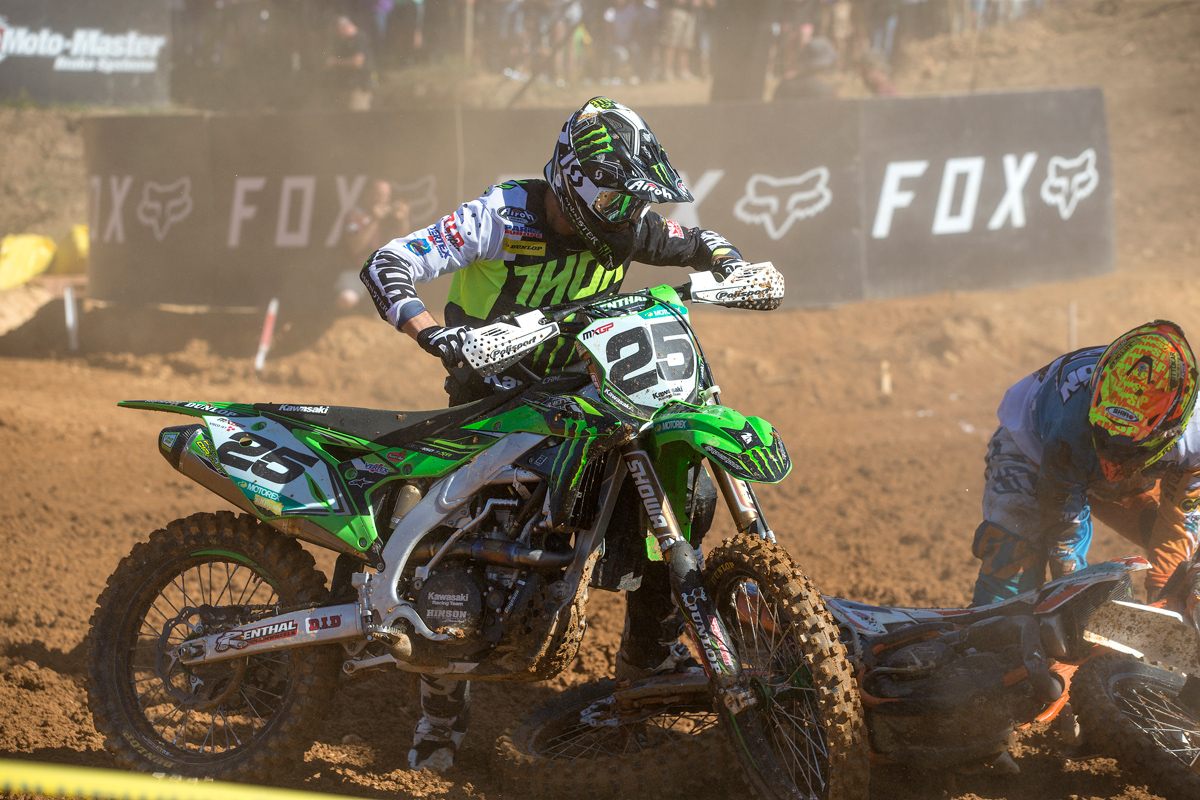 Cairoli’s qualification heat crash while leading at Maggiora was a cruel twist when he’d won two of the previous three rounds and was getting back into the title hunt. A fracture to his arm left the defending champion wincing in agony and coming through the event at Maggiora with his forearm in various shades of black and blue. The Sicilian painfully raced on for another three Grands Prix (even taking a third place in the second moto in Sweden) but was forced to concede defeat with the slow recovery being impeded by the rigours of the sport. For only the second time in a World Championship career that began in earnest in 2004 #222 missed a series of races (five in total) and dipped out of the top three in a final ranking for the first time since that ’04 campaign.

Perhaps the ultimate accolade goes to Jeffrey Herlings. Thinking back to Mexico and the final round of 2014 now still induces a disbelieving shake of the head. In my time reporting on the MXGP series it remains one of the most incredible narratives I’ve encountered. In a nutshell: Herlings wins the 2013 championship at a canter and blasts his way to a 143 point lead over KTM teammate Jordi Tixier – who had not won a Grand Prix – by round 13 through winning 12 GPs and 22 from 24 motos. He breaks his femur showing-off with an 85cc machine in a charity event, returns at Leon, Mexico six weeks later with the bone still freshly knit limping in anguish and deathly pale due to an infection. Tixier has somehow closed the gap to 23 points through his maiden victory in the Czech Republic and another second position in Herlings’ absence. Both compete in the finale at Leon. Herlings manages to guide the 250 SX-F to 11th overall but Tixier wins the GP and the title by 616 points to the Dutchman’s 612.

It was a sensational, insane, ballsy, ill-advised and ultimately fruitless attempt by the Dutchman to keep his finger tips on a third championship that he would eventually have to wait another two years to obtain. Recalling his gaunt expression and demeanour of suffering, it was clear that Jeffrey wanted his desperate appearance in Mexico to be as low-key as possible although it was anything but. Almost every journalist wanted his perspective on what he was trying to do. The flight over to Mexico and entry into the seventeenth fixture came at the last minute and whispers that Herlings had been watching the GP a week before in Brazil and saw that Tixier could only manage fourth overall in Goias meant he ignored the advice of many to hobble to the airport and to try salvage two-thirds of a season’s work with a still-snapped leg; any further crash or incident could have crippled the then nineteen year old. 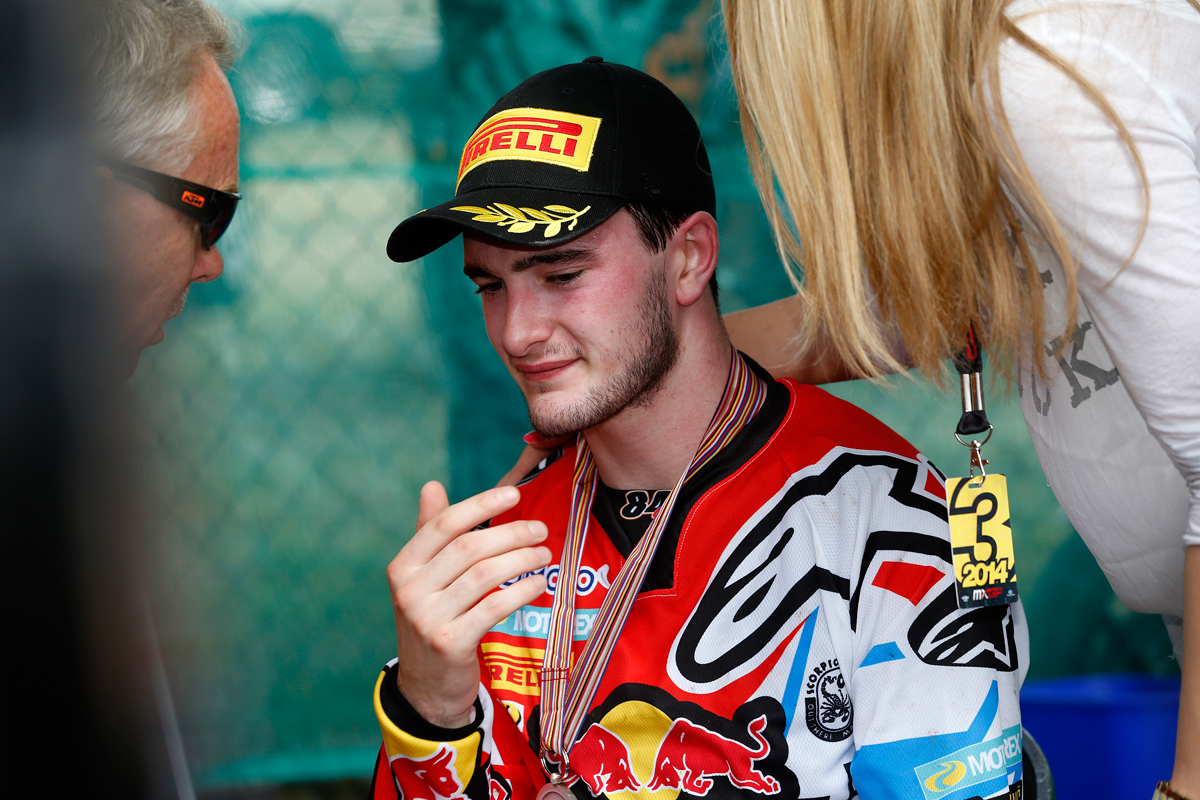 Behind the Mexican podium when all was done-and-dusted the risk, tension and the utter dejection that he’d missed out by four points after racking the better part of 47 per GP (10 rounds he took a perfect 50) was too much to contain and the tears flowed. When he’d gathered himself later he admitted to me in an interview that his Mexican manoeuvre was “probably a little crazy”. It wasn’t to be the first injury-drama for Herlings who was forced to mature and learn the dark side of the sport the hard way but it was the most dramatic and obvious case of what these athletes are driven to do.

Limit-searching brings injury as a natural consequence in any sport but what defines these individuals is the way they somehow embrace and categorise the setback and immediately work to another process. Even to this day in the violence and fraught danger of motocross it is still an eye-opener.