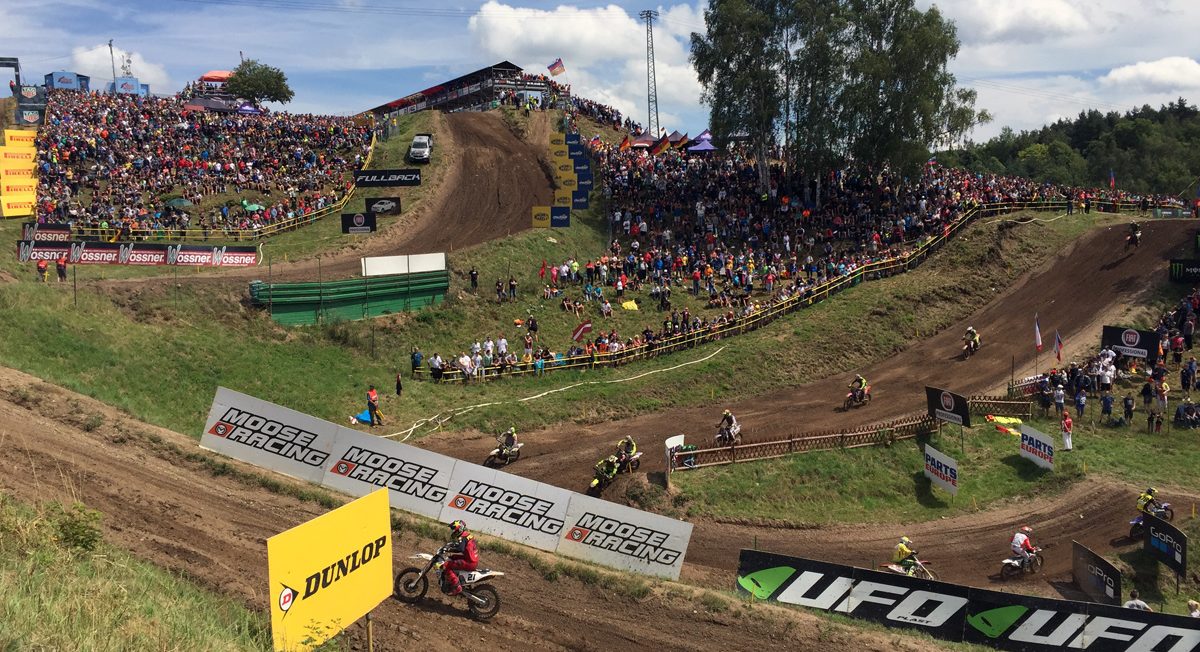 I didn’t attend the 2016 Grand Prix of Czech Republic but returning to Loket last weekend was like entering a timewarp: the paddock situated on the plateau of the scenic tree-lined hill overlooking the medieval hamlet nearby, the daunting drops to the lowest parts of the track layout, the old grass paddock also stationed at the base of a heaving descent and victim to flooding in previous years, and that majestic, stony and flowing track of cambers and inclines. There is something archaic about Loket but also mesmerising and distinctly historical: it doesn’t need a raft of old framed photos in the press room/club house from the 1990s to instil this feeling.

From Stefan Everts to Kiara Fontanesi to Jeffrey Herlings’ title celebrations. From shock wins to shock crashes. From drawn-out processional motos to exciting roost-chewing chases between riders separated by exhaust fumes alone, Loket has never dared to be predictable. Watching on the excellent platform between three corners and in the small sunken well of the principal valley setting I was able to marvel again at how a band of professional motorcycle racers can find the limits to lap within tenths of a second of each other and scrabble for the slightest grip while putting blind faith into pebbly dirt that could send their bike careering to the ground at a moment. Having watched MotoGP racers slide and wobble into the first turns at Mugello and Catalunya this summer, the Loket ‘attack’ by the likes of Cairoli, Gajser (impossibly out of shape at least twice while jumping onto the start straight but still having the strength to right the factory Honda), Desalle, Febvre and Herlings (especially Herlings) was no less staggering.

Loket has been home to sensation. In 2007 Josh Coppins had the MX1 world championship tucked into his pocket but the dream slipped through an inner hole as quickly as the tough New Zealander tumbled into the fence at the bottom of the notorious step-down and broke a shoulder blade. In 2015, only a few metres away in another section, Herlings had fallen and been struck by Jordi Tixier; a dislocated hip led to perhaps the most traumatic time for an athlete who is one of the brightest stars of his generation, his expletive-ridden social media post a day later causing many to think whether the Dutchman would hobble away from motocross for good.

The step-down is not a particularly difficult jump, and words from Pauls Jonass and Thomas Covington last weekend backed up the claim, but the height, blind entry and epic staging (the final metres opening a majestic view of most of the crowd and circuit) must feel like leaping off the edge of the world. It was here that Jonass scrubbed, miscued and crashed heavily in 2016; the resulting concussion forcing his abandonment of the season. The positive outcome was a calmer and more considered Latvian (he talks in detail about the accident and important realignment in special interview in the next OTOR) and contributed to the figure that went 2-1 on Sunday for a ninth win of 2017 from thirteen rounds and the ideal repost to the vague memory of twelve months earlier.

Of course the same part of the track claimed the life of teenager Igor Cuharciuc on Saturday and instigated a confusing time of emotion, search for causes and a stunned reaction of how to handle a unique situation at a Grand Prix (that anybody could remember). Feelings and opinions swirled. MXGP, like any motorsport, has been home to some horrible accidents but this was undoubtedly raw. It was an incident that will, and should, have repercussions and prompt discussions for many months ahead but on Saturday evening and Sunday the only direction was to push on; an almost full gate for the second 65cc moto Sunday morning showing that racing has a ferocious capability and stoicism to plunder onwards.

Having talked with the FIM and Youthstream and knowing the utter concrete priority that CMS President Tony Skillington places on making the sport and every single event as safe as possible then there can be no doubt that due care, attention and diligence was applied to the crash and the immediate aftermath; just as they were for Jonass and Herlings over the previous two years. MXGP now has arguably the best medical provisions in place for decades and the attention of the specialists as soon as the accident happened was instantaneous and lasted forty-five minutes with helicopter arrival and a fleet of experts all trying to reverse the effects of what would be a sad and ultimately fatal crash.

What happens now only involves questions and action. And the principal enquiry will revolve around whether European Championship junior races can fit into a Grand Prix framework, especially at a circuit as undulating and unforgiving as the time-weathered curves of Loket.

I know that MXGP Championship leader Tony Cairoli was heavily affected by Saturday and I spoke with him briefly before leaving the circuit that evening. Like many he put aside the mental turbulence. Loket was a sad weekend for showing the perils of motocross at its worst but the pendulum swung (if it possibly could) to also reveal some of the sport at its best. As mentioned: the ability, skill and courage of Pros like the Sicilian and his rivals renewed awe in what humans are capable of with a dirt bike. 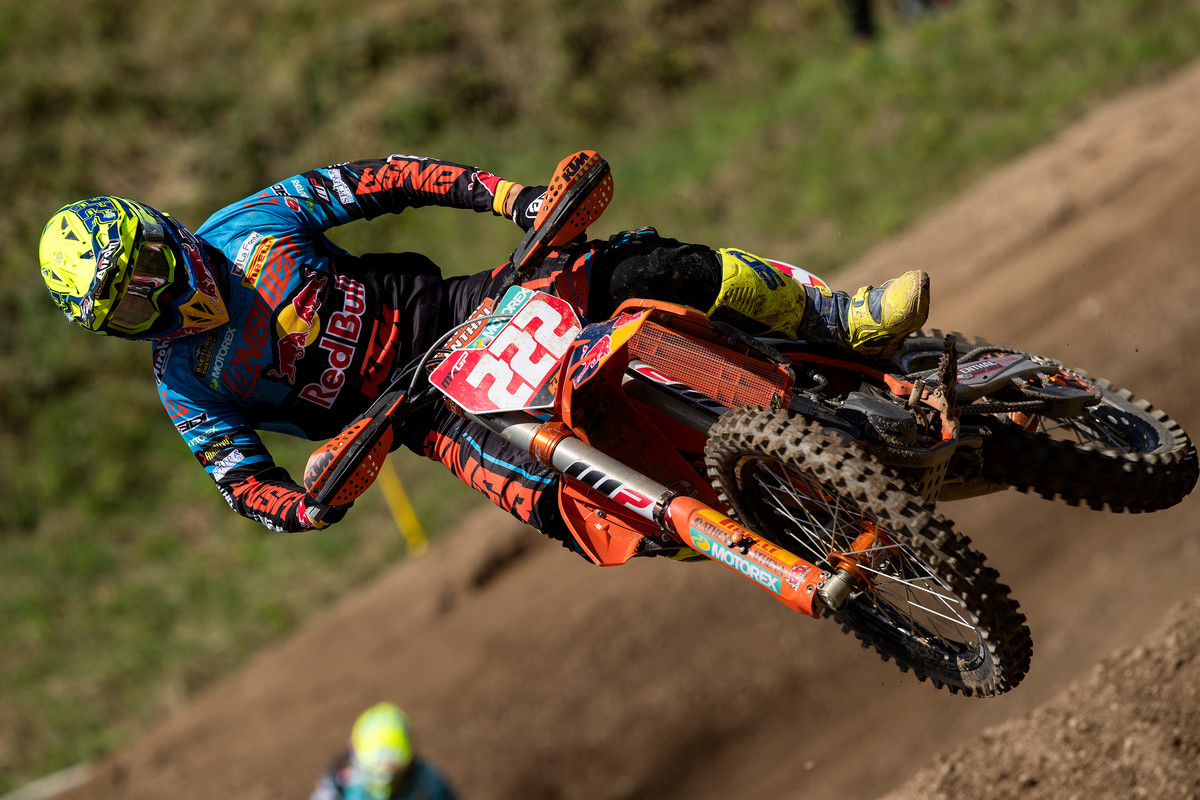 Although motocross can be terribly unpredictable, for Cairoli in particular Loket could be the sign that a triumphant 2017 will go on to be even more glorious. Sunday ushered his 83rd career success and the first at a track he has repeatedly declared as one of his least favourite. He hadn’t walked the top step of the podium at Loket in five years. If #222 could magic a 3-1 at one of his weaker venues then what hope is there for principal rivals Clement Desalle, Jeffrey Herlings and Gautier Paulin in the remaining six fixtures? Cairoli sat shirtless and calm in the underbelly of the KTM race truck when we spoke after the post-race press conference. He held an air of serenity but also – to me – slight bemusement. He was quick to credit the benefits of his 450 SX-F in his late, powerful first moto charge and second moto dominance. “[racing the 450] was easier than the 350 because I had to be more aggressive and missed the extra torque of the 450 in some parts of the track,” he had said. “The numbers are starting to count a little bit,” he almost smiled about the digit of 83. “I’m happy with the season and how it is going and I look forward to race every weekend which means I’m having a lot of fun on the bike.”

Desalle’s excellent consistency meant that Tony’s gain from the weekend was minimal (just 1 point) but it was another date scratched from the calendar and he still has a lead of almost four motos with just twelve left to run. 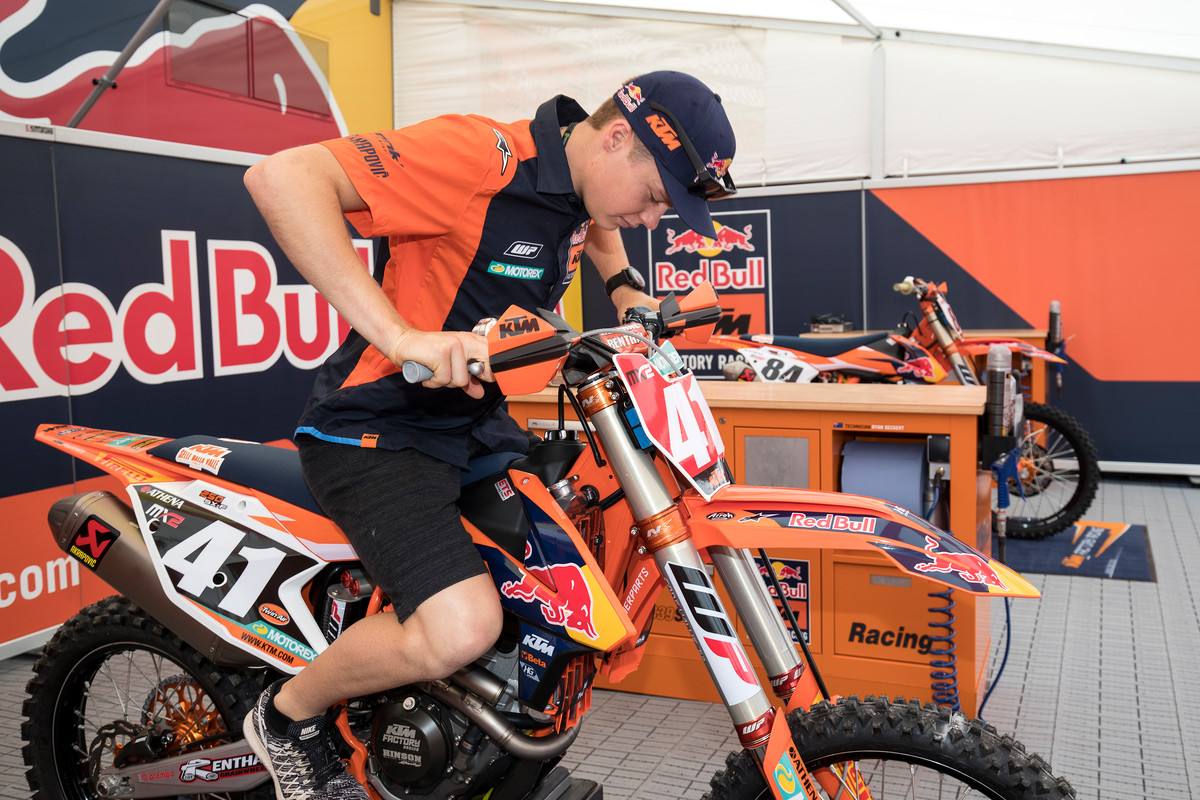 Jonass will also look back on this MX2 success as a pivotal moment in what could be a momentous MX2 campaign in just his third GP year. The Latvian is chasing his first world crown as Cairoli pushes for his ninth. “When I did the track walk many guys were asking me how I felt about the jump but I actually did it on the first lap of practice,” he said. “It is quite a small jump but last year it was my stupid mistake and I wanted to go too fast and scrubbed it too much. It [the 2016 crash] was not in the back of my mind; I focussed on the race and it was alright.”

Covington was superb to win the first moto – the wettest and muddiest of the day in the two categories – but the element of MX2 that emerged from Sunday was Jeremy Seewer’s (typically polite) belief that KTM were already using team tactics as Jonass overtook the much-improved Jorge Prado for the lead early in the second moto but the Spaniard fought tooth-nail-and-whatever else to keep the Swiss and the competent Benoit Paturel behind him. And almost succeeded (the teenager was exhausted to the point where he could barely talk post-race). Seewer actually crashed and collected Paturel at one stage after Prado engaged every type of line defence he could employ to stay in the top three, well aware that if the Suzuki came through then so would the pack of four pursuers as well.

Seewer credited Prado (“he’s so smart”) before faintly airing his convocation that he’d been undone from a Portugal-type chase of Jonass by some latent racecraft. Perhaps there was some truth to what he was saying (although Jonass found it amusing) but Prado defied Jonass for almost the entire first moto meaning that the rookie is either not playing ball or is being extremely subtle.

Like MXGP, the 1-2 overall at Loket for the two athletes in the same position in the standings did not drastically alter the championship picture: Jonass leads by 47 points compared to 38 pre-Loket but Suzuki and Seewer will soon start to run out of motos. Enticingly the Swiss GP comes close after the Belgian round (up next), which are two events that will hoist both protagonists to the fore, and some surprising results in the next four weeks could really turn things around.

As is often the case at Loket first moto tedium gave way to some close and riveting scenes in the second half of the race timetable as the technicality of the terrain increases. Will Loket morph and have a different aspect for 2018? It is hard to imagine it untouched for future FIM World Championship visits. In 2015 Talkessel in Germany was allegedly threatened with loss of Grand Prix status unless preparation and watering practices of their hard-pack were improved and the club duly took measures to try and hike up the safety and drop the speed.

A last observation from the weekend involves WMX. The Women’s series has twice gone down to the wire at Loket and a second win for Courtney Duncan saw the red plate swap bikes again, landing on the New Zealander’s Yamaha. With just 12 points splitting four riders then another fantastic climax looks to be coming.