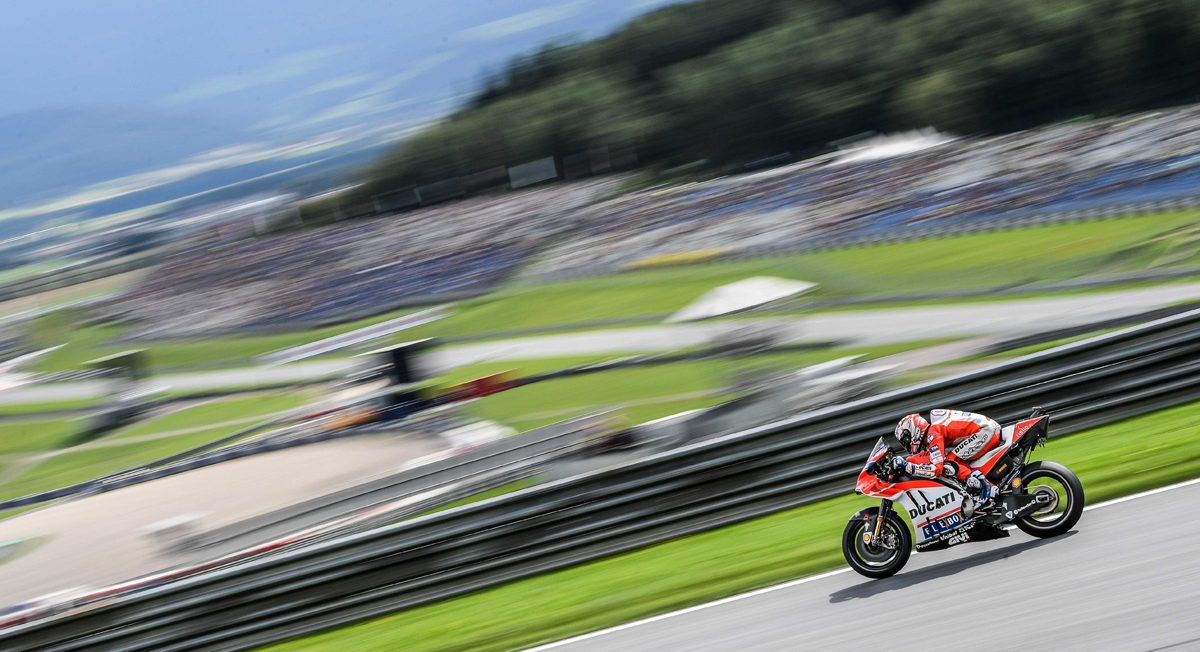 And Austria makes it three. Andrea Dovizioso’s third win of the season and his fifth in ten seasons of MotoGP is a mark of the transformation the Italian has undergone. He came into the class as a rising young star at the age of 22, a Honda protégé in the JIR Scot team. He had moved up with the team and the backing of HRC after finishing runner up in the 250cc class the two previous seasons, and winning a 125cc title for the Japanese factory. Under normal circumstances he would have gone straight into the Repsol Honda team but Nicky Hayden had won a MotoGP title for Honda, beating Valentino Rossi in 2006, and so HRC’s loyalty demanded Dovizioso take a seat in the satellite antechamber.

He only had to wait another year. Honda dropped Hayden at the end of 2008, opening the way for Dovizioso to take the American’s place. Hayden headed to Ducati, where he became wingman to Casey Stoner. That year, Dovizioso took his first MotoGP victory, riding a superbly controlled race in the rain at a treacherous Donington Park. Two seasons later, Casey Stoner sounded Dovizioso’s death knell at Repsol Honda. Honda signed Stoner to partner Dani Pedrosa at Repsol Honda, but Dovizioso refused to be shuffled off to a satellite squad, demanding HRC honour his contract and keep him in the factory team. Honda did just that, running a three-man squad for 2011, and then after Dovizioso was out. The Italian had been racking up regular podiums, but he hadn’t been winning. Honda spend too much money on MotoGP to have their factory riders standing winless.

Though it seemed bad at the time, losing the Repsol Honda seat was probably the best thing to happen to Dovizioso. After a successful year in the Tech 3 Yamaha squad, Ducati offered him a seat in the factory team, much to the chagrin of Cal Crutchlow who was eyeing that ride. Dovizioso took the place of Valentino Rossi, departing after the two most disastrous years of his career. It was the start of a long, slow, rebuilding process that would see Ducati go from being hopelessly lost to being competitive again. 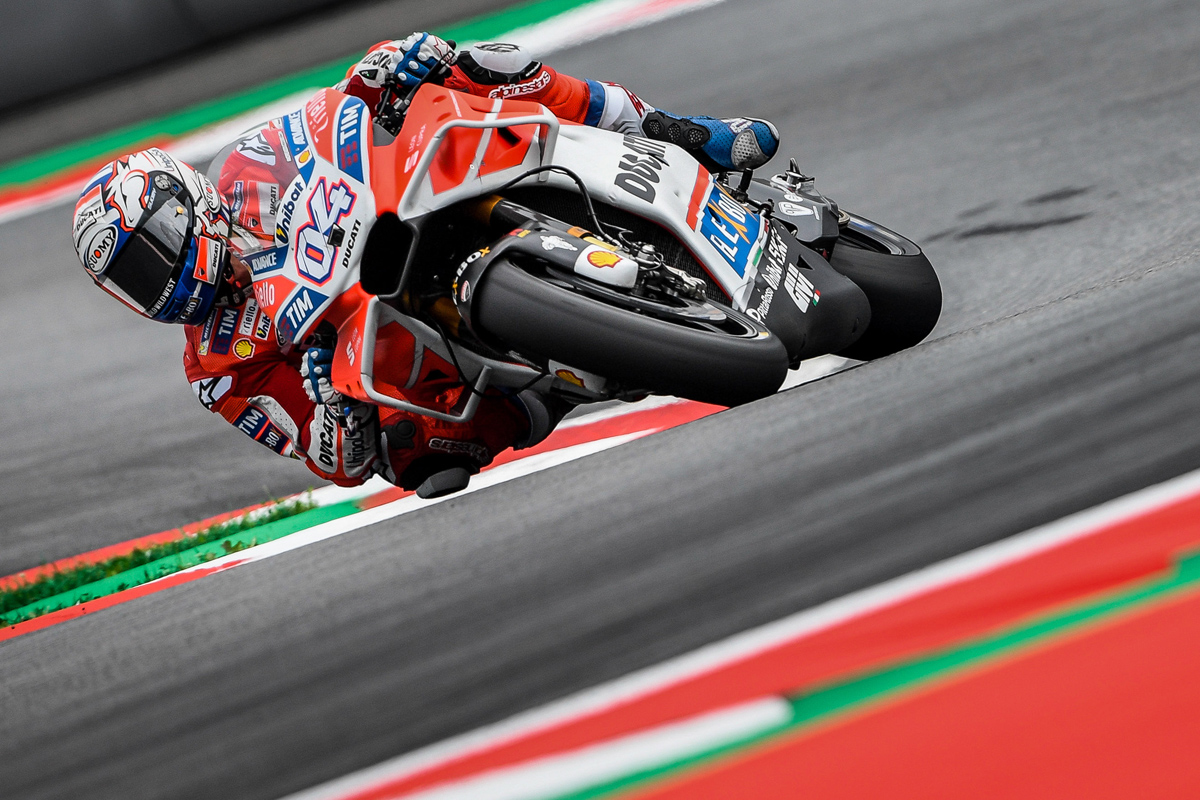 Gigi Dall’Igna has been widely credited with Ducati’s return to competitiveness, and while the great majority of the credit belongs to the Ducati Corse boss – his organizational skills, more than his engineering skills – Dovizioso has played a key role in the turnaround. Dovizioso is a calm, thoughtful presence in the pit box, a keen listener with a deeply analytical mind. Though he dislikes the daily media debriefs, he listens carefully to questions and gives straight answers. If you are puzzled about a particular detail of riding a MotoGP bike, or setting it up to go fast, Andrea Dovizioso is the man to give you a clear and precise explanation.

For a long time, it was felt that this was the factor holding him back. He was thinking too much on the bike, people said, not switching off the brain and going balls-out for the win. He was the antithesis of Marco Simoncelli, the Italian icon who was all raw talent and unthinking actions. “What we need to beat the Spanish riders,” an Italian journalist friend commented to me at the time, “is to cut Andrea and Marco in half and stick them together to create the perfect Italian rider.” The contrast was all the more poignant because the two men had spent their entire lives racing each other, from minibikes all the way to MotoGP.

As the Ducati improved, so did Andrea Dovizioso. The changes Gigi Dall’Igna made to the engine of the Desmosedici helped the bike turn, and each new chassis modification made the Ducati easier to manage. Dovizioso worked on his riding, worked on his fitness, worked on his attitude, improving at every step. Podiums started to come, then became more frequent. But in battle, Dovizioso always seemed to lose out to fiercer, more committed rivals. He was seen as the fifth-best rider in the world, an also ran who would never win a title.

That all changed in the middle of last year. A new Dovizioso appeared. Less flustered, more focussed, above all more ruthless. He stood taller when you spoke to him, looked you in the eye with a gaze of cold steel. He won at Sepang in the rain, and we all discounted it as another wet win. He won at Mugello in the dry, and we sat up and took notice. He dominated at Barcelona, a feat of calculated skill and race management. Finally, in Austria, he took on the roughest, toughest passer in the paddock, and beat him at his own game. Now, nobody believes Dovizioso isn’t a candidate for the championship.

Where did the change come from. “Small things,” Dovizioso likes to say. In reality, he has been receiving help from a mental coach, a famous psychologist from Chile. “From the middle of last year I believe I understood a lot of things about life,” he told us after winning in Barcelona. “It helped me to approach everything, life and sport, in a different way, with a different approach. Everyone can learn to understand different things in a different moment in your life. Small things, but they create a big difference.” He has learned to ignore distractions, to not get waylaid by the trivial and unimportant. Concentrate on what matters: turn up on a race weekend, work on adapting the bike to the track, then put his heart and soul into the race.

Some heart. Some soul. Some racer.