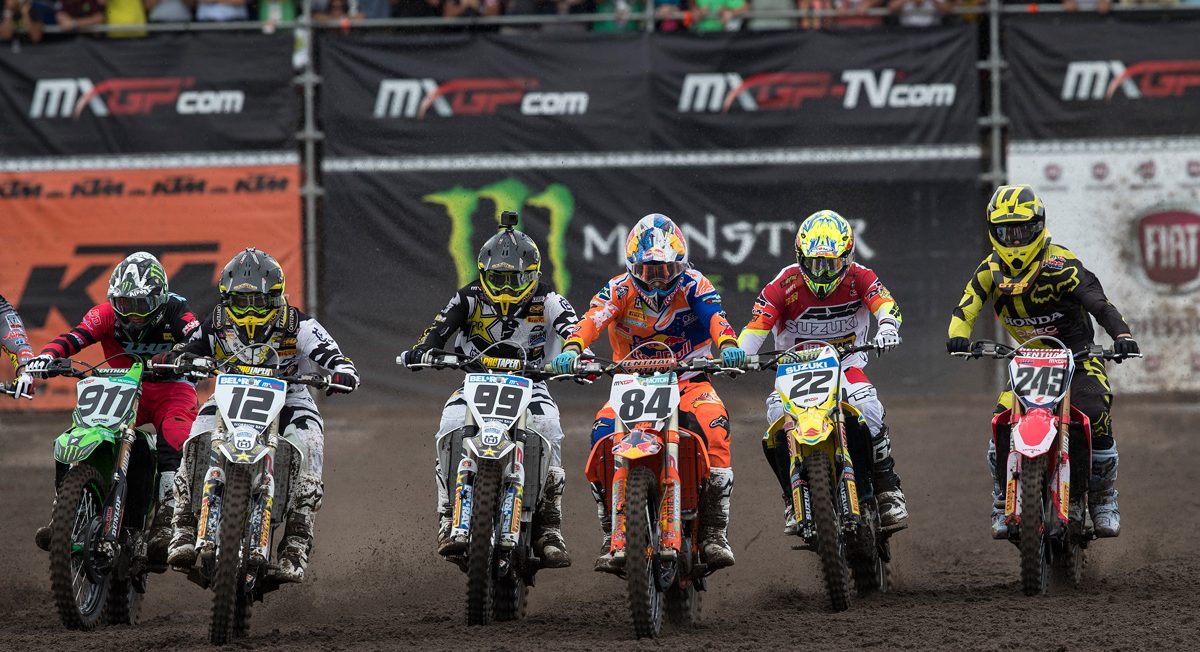 Turning on any TV while in the United States at the moment inevitably leads to talk and news of the weather. The passing of one hurricane and the impending arrival of another – Irma – means that climate is a thriving current issue and instability was prevalent around Jacksonville. Daily thunderstorms have been generous with ‘watering’ and Friday night dumped tropical amounts on the area housing the flat WW Motocross Ranch. The humidity and high water table means that the facility ‘feels’ wet and the extra rain created muddy and swampy conditions around the site for the first official day of the first USGP on the east coast this century.

Practice and Qualification was a showcase for Ironman ‘Ironman’ Red Bull KTM’s Jeffrey Herlings to continue his streak of formidability. Fastest all day and then disposer of teammate and world champion-elect Tony Cairoli in the Heat race, the Dutchman brought his proverbial swagger to the seventeenth round of the season. The USGP was hyped to be a ‘Part Two’ between AMA 450MX Champion Eli Tomac and Herlings with the subplot of Cairoli needing just to tie on point with Herlings from the weekend for a ninth world title. 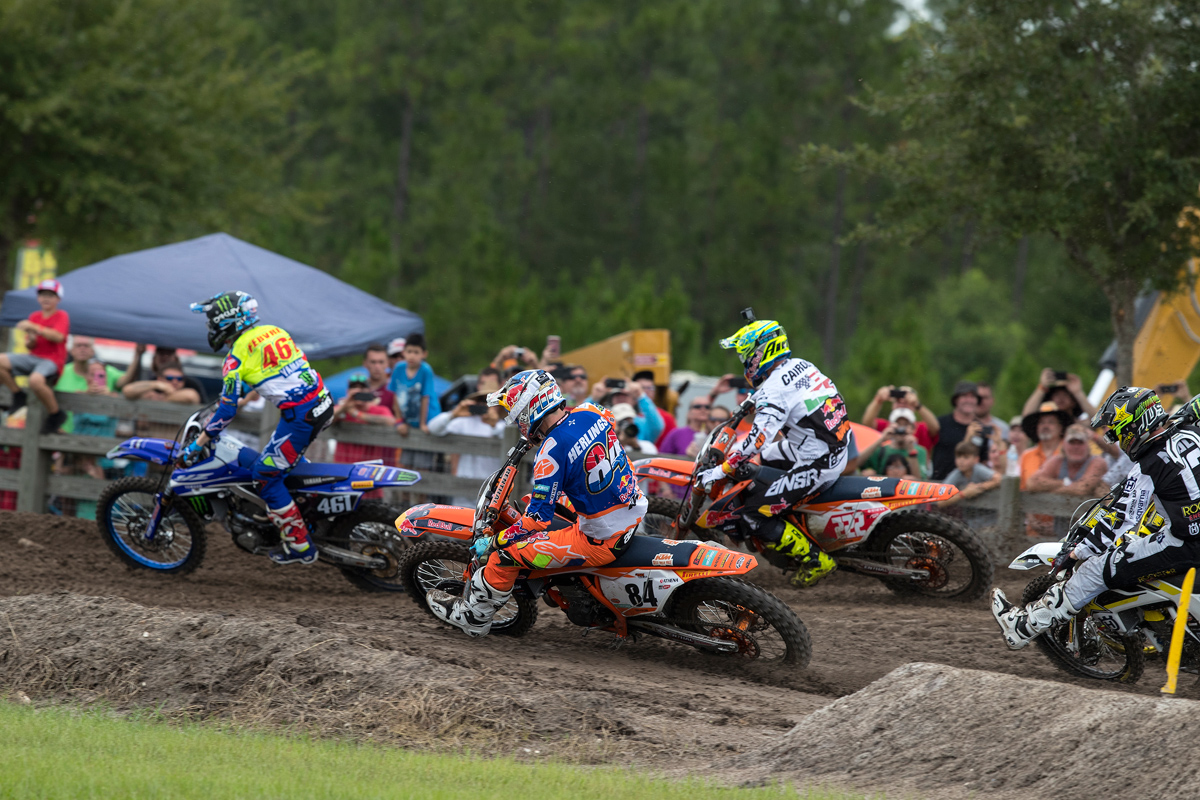 #84 was a stretch apart. Tomac seemed to struggle. 21st and 9 seconds off the pace in the first free practice 13th and 3.5 seconds away from Herlings in the second session he then gated poorly in the race and couldn’t make any ground from a first lap slot of fourteenth. He finished twelfth and declined a slot in the press conference alongside Herlings. Word from the Monster Energy Kawasaki team is that a few settings need to be changed on the KX450F to increase the champion’s competitiveness. Tomac was one of the few natives battling the MXGP elite with Cooper Webb tweaking a wrist and sitting out Qualification (but allegedly attempting to race tomorrow) and Justin Barcia retiring from a heavy collision with Gautier Paulin when the Suzuki man jumped long and into the Frenchman sending both down. Evgeny Bobryshev was another faller and Max Anstie pulled out after being hit on the right hand by a rock from Tomac’s rear wheel.

MX2 belonged to a surging Thomas Covington. The Rockstar Energy Husqvarna rider pulled away from impressive Star Racing Yamaha’s Justin Cooper (another ‘Cooper’ fast emerging) while the Red Bull KTMs of Pauls Jonass and Jorge Prado followed behind in what was the first of two fairly static races. A larger crowd than previous years at Glen Helen defied the mud and it will be interesting to see how many more pull through the gate tomorrow with a similar overcast (but mercifully dry) forecast in store. 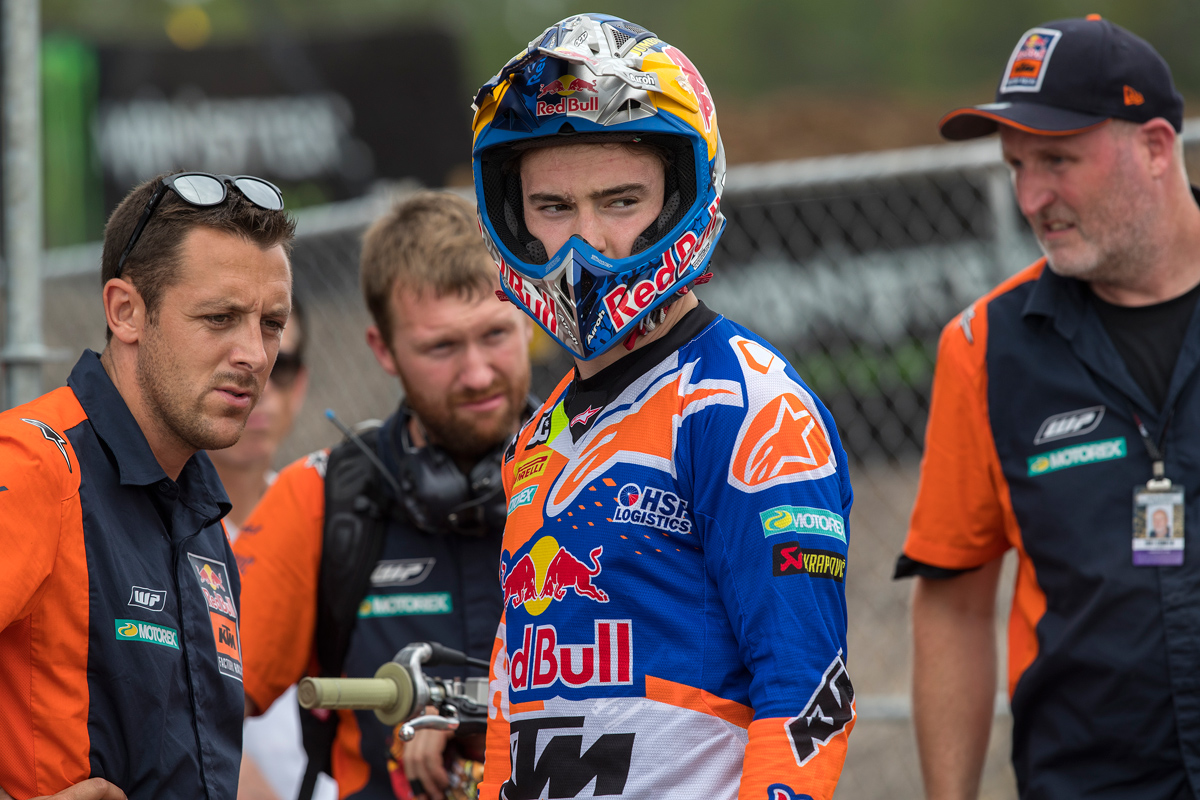 WW is more compact, flat and featureless in comparison to somewhere like Glen Helen. As with any circuit it has its merits and has been chiselled by sometime-Grand Prix track designer/builder Justin Barclay. The course was positively received by most of the riders. Rockstar Energy IceOne Husqvarna’s Paulin described it as an ‘artificial Valkenswaard’ due to the largely sandy nature but the quantity of jumps and waves, speed and length and lack of testing ruts and bumps for a first day of action meant little in the way of close racing or overtaking. “The track was tough to pass and they flattened it a lot today and that was normal because we had a lot of rain in the morning,” Herlings commented. “Hopefully it will be left a bit rough tomorrow so we have some places to pass.”

Monster Energy Pro Circuit’s Adam Cianciarulo continues to court disaster in his Grand Prix appearances. He crashed hard at Charlotte last year and was counted out of action and on home state turf (his family have a plaque on a dedicatory stone plinth on Daytona Beach) he hurt his knee in practice and was a casualty once more.