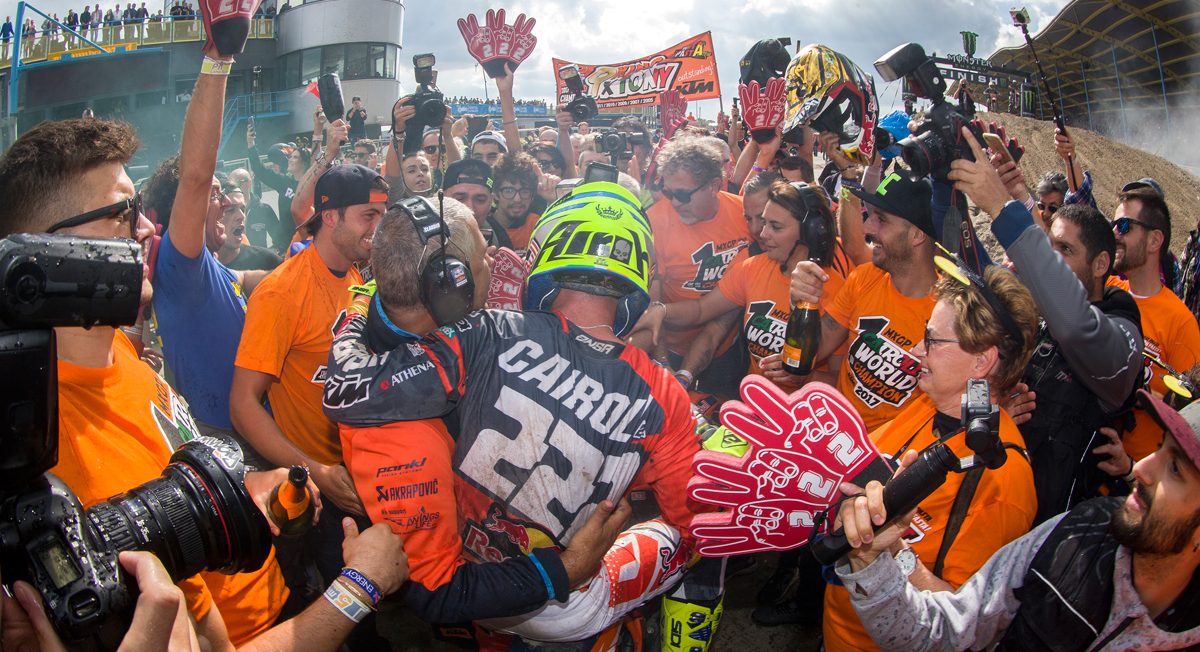 How the world was painted orange

KTM have done it again...but it wasn't always champagne and roses
12th September 2017

We’ve extoled the talent and resilience of both Tony Cairoli and Jeffrey Herlings though Blog entries this season but what about KTM? The manufacturer is heading for a double world crown and there is little doubting the voracity of the platform the Austrians have been able to give all five of their factory riders in both Grand Prix classes.

Cairoli may have just delivered the firm’s first world title for the 450 SX-F – meaning that the bike now has the full set with AMA Supercross and Motocross accolades – after five with the 350 SX-F between 2010 and 2014 but the MX2 effort is undoubtedly more impressive. Ben Townley once described the original 250 SX-F with which he won the inaugural MX2 contest in 2004 as “so fast it was embarrassing”, and that bedrock of speed and engine power has made the Red Bull MX2 slot the most desirable saddle in the class ever since. Cairoli (2005, 2007 with Yamaha), Christophe Pourcel (2006) and Tim Gajser (2015) are the only athletes to have interrupted KTM’s MX2 streak. Tyla Rattray, Marvin Musquin, Ken Roczen, Jeffrey Herlings (three times), Jordi Tixier and with Pauls Jonass almost there mean that something is very right with the simple but devastatingly effective 250cc architecture. Indeed, KTM’s progress with the four-stroke engine since the early years of the last decade was the base for their Enduro success as well as elements of the technology feeding into the Moto3 programme. 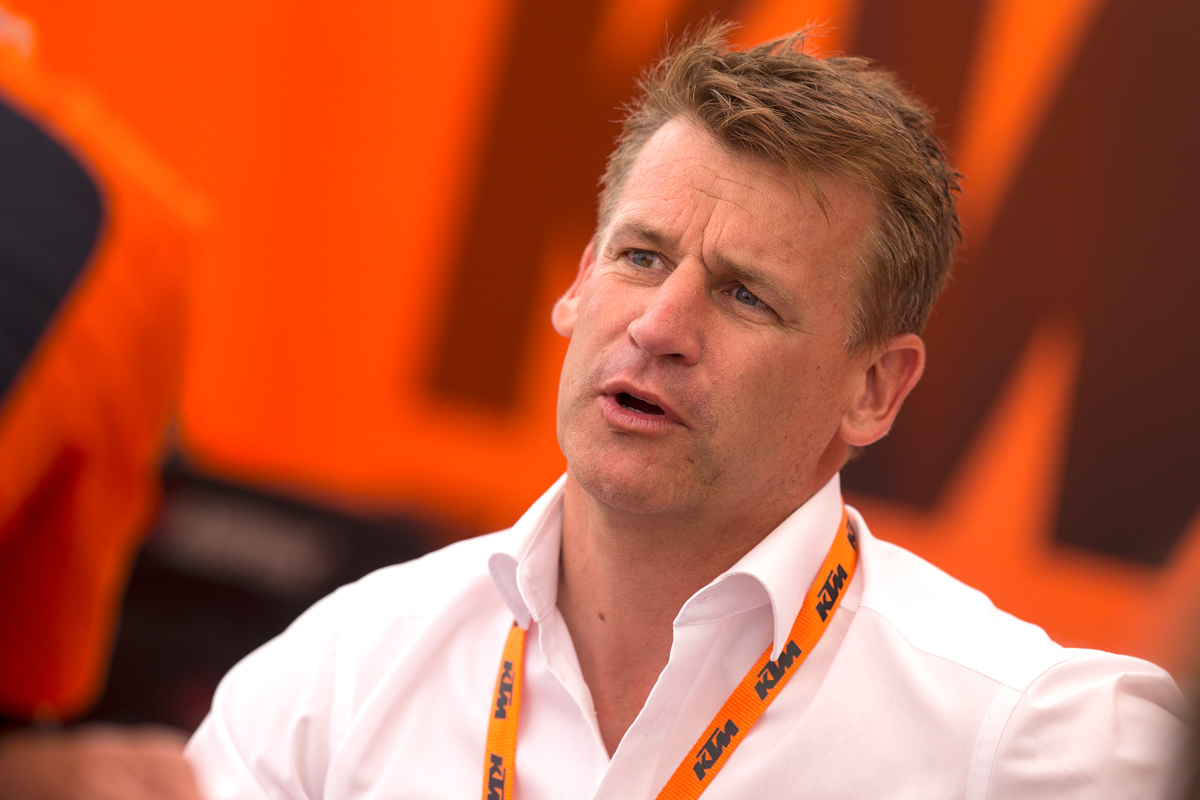 Credit for KTM’s prolificacy has to go down to Pit Beirer and Robert Jonas. The German and Austrian conspired to make bold (and often ballsy) moves to ensure the best possible people and staff occupied key places. The construction of this system meant an ethos towards teamwork and connecting departments like R&D, design and racing to a streamlined and rapid effect. Swooping for Cairoli midway through 2009 when Yamaha had their ‘Decca Records/Beatles’ moment and ensuring the Sicilian would be able to acclimatise and deliver from the ‘off’ with what was a brave and completely untried project with the 350 SX-F was down to their vision of also snaring the whole Claudio De Carli set-up.

The same wholesale approach was applied to North America with their complete conviction in Roger De Coster and his wishes for the AMA operation; an organisation so devastatingly good that even company CEO Stefan Pierer has publically admitted he was proved wrong in how supercross success could influence sales and turnover in the biggest market for dirt bikes.

In Europe De Carli oversaw and guided the Cairoli-350 train to four years of unsurpassable energy and acclaim but the elevation of German Dirk Gruebel with his ever-present staff like Valentina Ragni, Wayne Banks and formerly Rami Falt kept the technical element of the race team at a high level and thus ensured MX2 stayed at a peak. 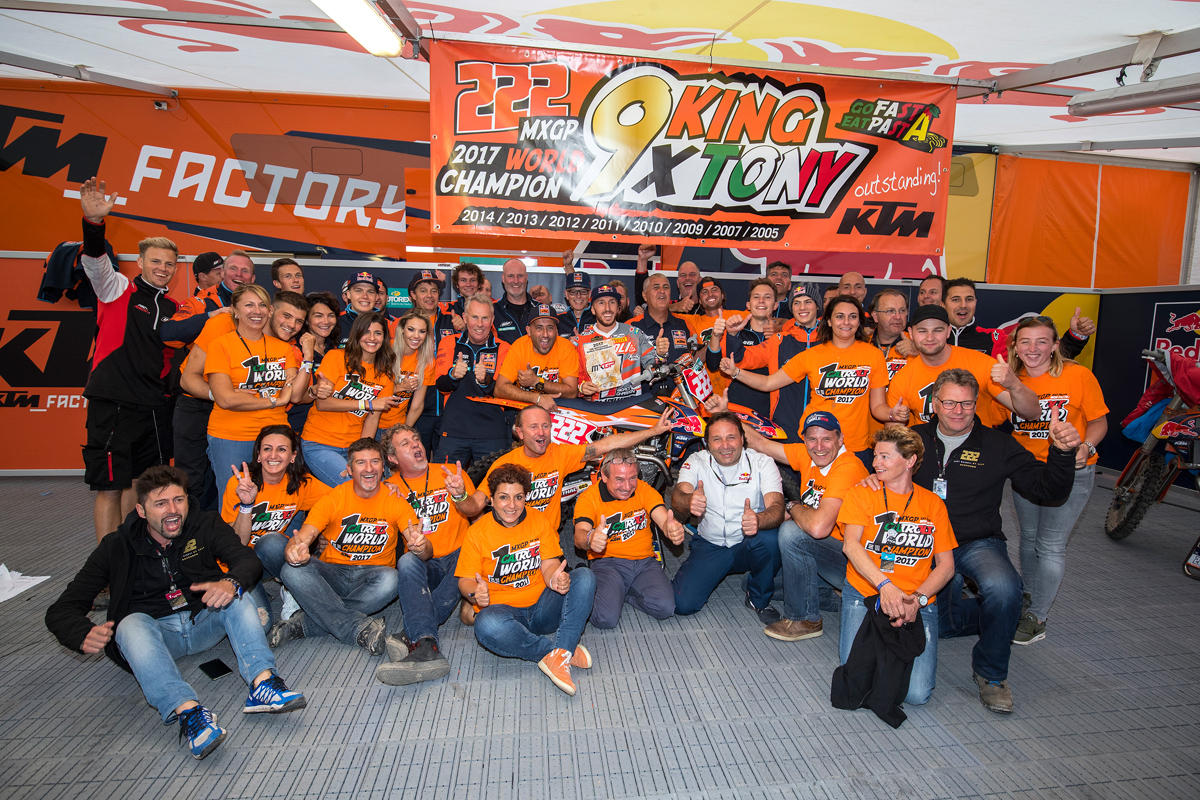 It wasn’t all rosy. Beirer and Jonas’ strategy came from some painful and forced re-thinking. In 2006 KTM thumbed the chequebook with glee by opting for big name athletes Mickael Pichon and Sebastien Tortelli. MXGP (then branded as MX1) had begun in 2004 and Belgian Steve Ramon (who would be his country’s last world champion in the premier class when he took the 2007 title with Suzuki) would be the division’s first ever moto winner and on the new 450 SX-F at a rainy Zolder. KTM worked but also sat on their laurels in those first years and when Pichon melted down after a few races and quit in ‘06, and Tortelli crashed and entered retirement by round three in Portugal the whole effort managed by the late Georges Jobe was a red-faced and polarising mess. The company’s racing output at a time when a vast Street portfolio of bikes and MotoGP was a fanciful dream was placed in the hands of offering satellite riders like Max Nagl and Jonathan Barragan works support. Now, Gruebel admits the 450 SX-F was heading in a wrong direction, having been cobbled together on principals of the Enduro bike. The later editions of the 450 were crafted more as a pure motocrosser. 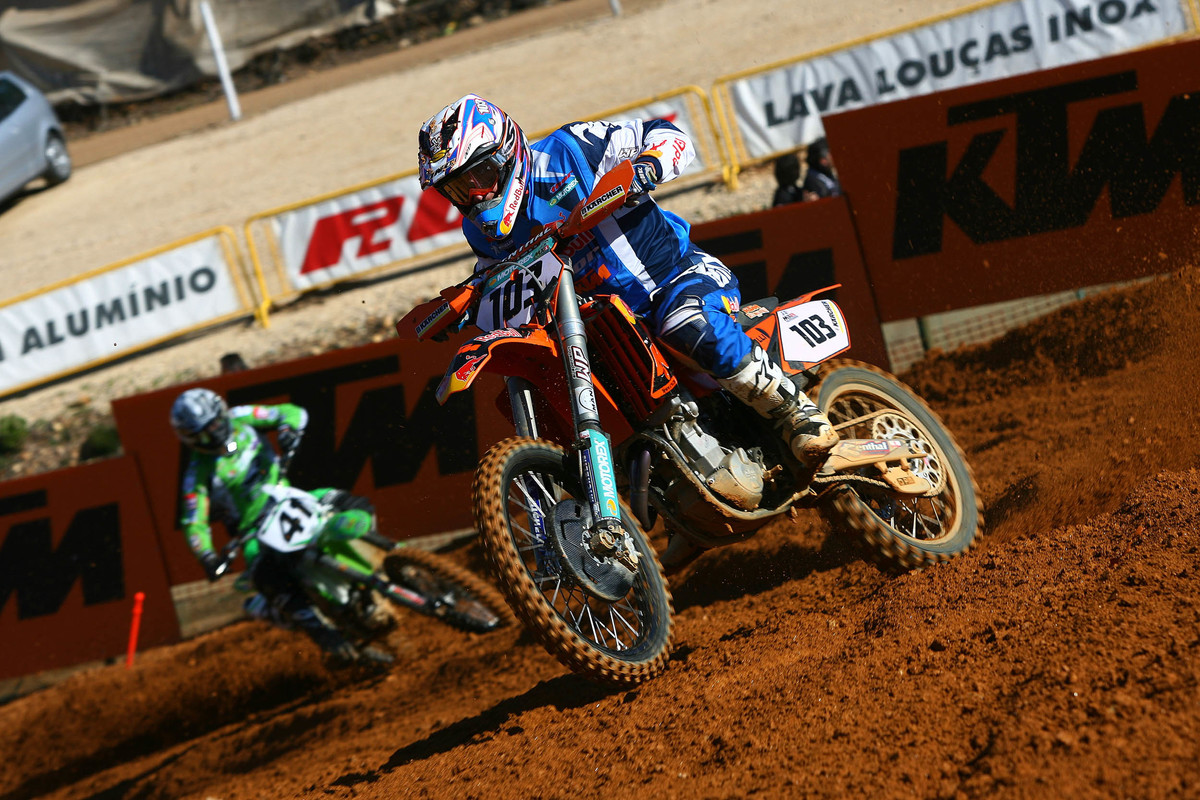 Beirer was new to the role in the wake of Kurt Nicoll’s stewardship at that time and recognised that KTM had to be more careful and considerate in their placement and planning, while also remaining poised to seize any opportunity that came along; as proved to be the case with Cairoli and Marvin Musquin’s ugly team dispute with Honda midway through 2009.

The departments in Mattighofen (and later Munderfing, the racing HQ a few miles down the road) were pulled together and seeds were sprinkled.

Beirer, who now has to spread himself between MotoGP, Supercross and MXGP appearances (even if it is Jonas who heads off-road), has been vindicated in almost all of his decisions and judgements to the point where his dealings with the board of directors and relationship with Red Bull is responsible for millions of euros and many people’s livelihoods and has indirectly affected fans’ enjoyment and perception of racing around the globe. It is a pressurised and frantic job and the German must still be holding the throttle in sixth gear as KTM continue to fly in MX, win the Dakar and wade through the first term of MotoGP.

Crucially the investment in racing has paid off for KTM through hard numbers and brand awareness. For the sixth year in a row global sales and revenue reached new heights in 2016; inflating 10.1% and 11.7% respectively and breaching the one billion barrier. The R&D department has grown from thirty at the start of the century to almost six hundred as KTM invested over 100 millions euros into their projects and output. Alliances with Bajaj and expanding international motorcycle production aside, their brand values continue to ring-true for off-road. It is here where MXGP, Supercross, Dakar and Enduro spoils have paid-off and more than 46% of total income was banked. Crucially off-road growth was recorded at more than 23% of revenue and almost 21% for bikes sold in 2016. One can only imagine that the figures will climb again after all the wins and titles are counted and all the marketing and PR of the latest roll call of glory is fired out. 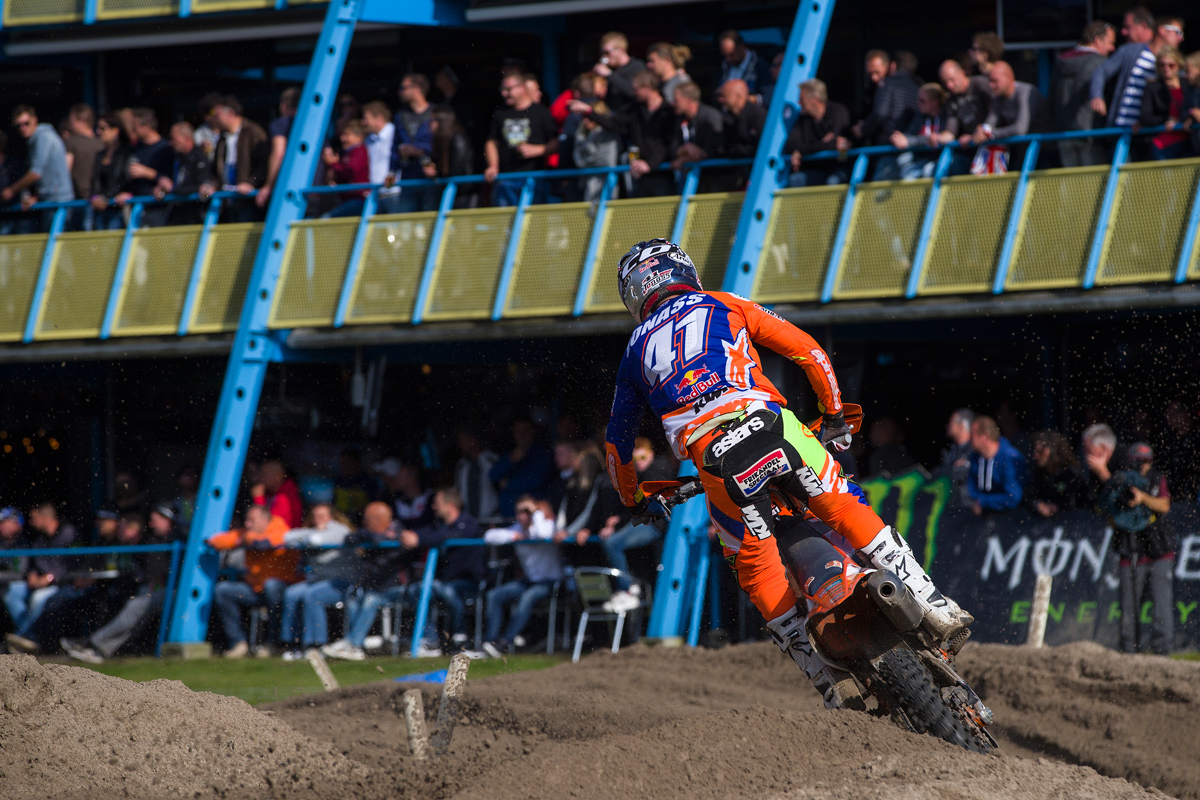 More than perhaps any other brand KTM have shown that while you have to pay to race, racing can also pay. Boiled down to the basics they are making the equation work. Then add on all the extra advantages to do with image – the branding, the amazing starts, the marketable athletes, the technical reliability (previously KTM’s biggest Achilles heel) – and its clear that the Austrian are nudging their competitive structure and reason-for-being on the track as close to optimum as possible.

The only drawback to what they have accomplished over the years and specifically in 2017 is the formation of an ‘empire’: the big target they now wear and how people will almost rejoice in any failure or defeat, like any sporting behemoth. I imagine that KTM, especially Pit, will enjoy that position though, and it says a lot for their achievements and belief that they will vocally embrace any challenger.