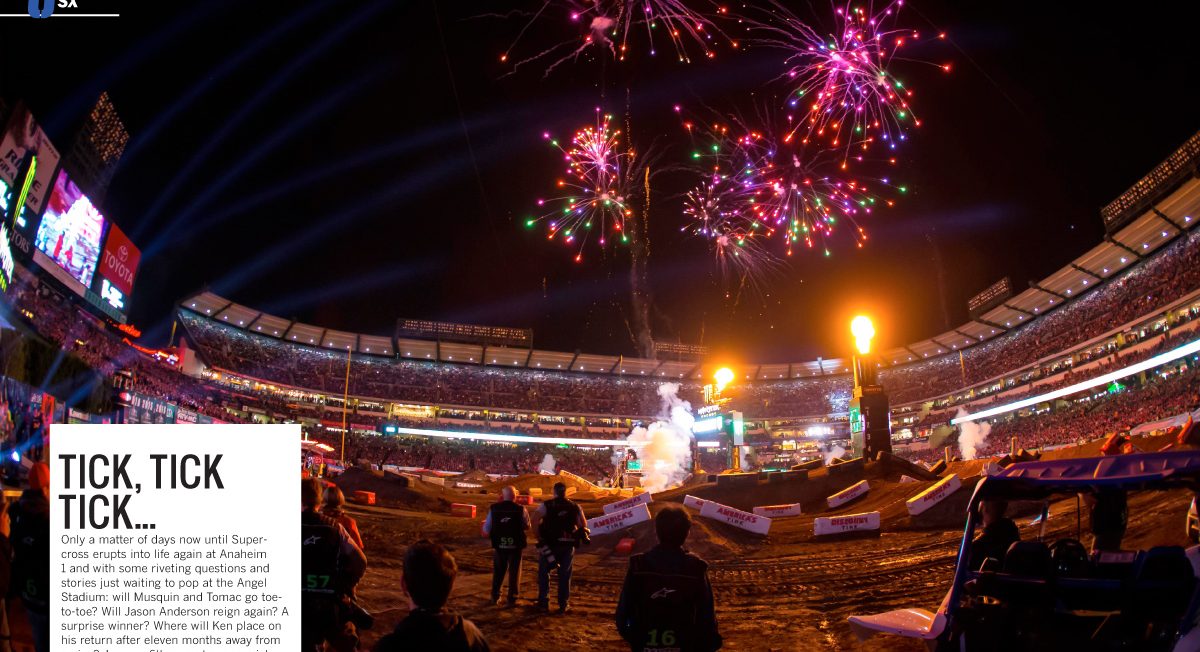 Anaheim 1: Shooting in the dark

Putting the Pulpster on the spot
19th December 2017

Merry Christmas and all that to the readers of OTOR; hope the holidays are treating you well. Since this is the last issue until the new year, Adam asked me for a way-too-early Anaheim one prediction column! Please take this with a grain of salt because it’s hard to forecast this stuff and if you’ve ever seen my fantasy MX scores, you’ll know that I’m not that good at it. Second-guessing AFTER the race? Heck, I’m a virtuoso at that, ask some of the teams and riders in the pits.

1) Eli Tomac: I’m surprised in my bench racing with fellow fans and media members at the lack of respect a guy that won nine races last year gets. It seems to be more about the races that he threw away more than the NINE he won. Yeah, he tied Damon Bradshaw for the most wins in a season without winning the title but he was very dominant for most of the campaign. He’s my pick for the title and my pick to start the year off right.

2) Jason Anderson: The Rockstar Husqvarna rider won Anaheim 1 a couple of years ago and in his rookie season was a very surprising second. Last year was up-and-down for him after that MXDN crash and this year he hasn’t spent as much time at the Baker’s Factory down in Florida as in other years. Anderson’s an elite rider: he’ll be very good and ready to go at Anaheim 1.

3) Marvin Musquin: The Frenchman has had a great off-season…in fact it couldn’t have gone any better! He’s ‘the guy’ at Red Bull KTM now with Ryan Dungey’s retirement and he’ll be a factor in supercross week in and week out. With his skill, his bike, his starts it’s all there except for whoops speed. If Marv had Tomac’s capabilities in this section it might be all over for everyone else. He’ll get on the box at A1 and work from there.

4) Ken Roczen: The German star’s comeback to racing is a success with a fourth at round one. I know Kenny’s goal is to come back and win races again and I absolutely believe he will do that. Just not at the first one. There’s no way he’s forgotten how to ride a dirt bike fast and he may even set the fastest qualifying time at Anaheim but riding and racing are two different things and it’s been a LONG time since he’s raced. Give him a fourth at round one and we’ll move on.

5) Cole Seely: The Factory Honda rider is always good on Southern California tracks as it’s something he’s grown up on. When the sun sets and the moisture comes up, Seely’s great at throttle control and with friends and family in the stands, he’ll crack the top five and be a podium threat all year long.

6) Cooper Webb: The Monster Yamaha rider had a terrible season last year where everything that could go wrong, did. Well this year he’s made some changes to his programme on and off the track and a last report from someone who was there and doesn’t work for Coop or Yamaha (that’s very important when you talk to people by the way!) Webb was flying and much better than his teammate Justin Barcia.It’s a big year for Webb with his contract coming up and I say he rebounds.

??? Chad Reed: As I detailed for OTOR blog: I’m just not sure what’s going on with the 22. He’s bought some Husky’s and is going racing but with his ankle injury, there’s no chance he’s close to 100% at A1. He’ll get better as the series goes on but it’s going to be tough for him to get back to “potential race winner any weekend” status. I need to see how he looks on and off the bike before I’m ready to make any bold claims. Saying that though, he loves Anaheim!

???? James Stewart: Stop it bro. It’s over. I’m disgusted in myself that I even listed him here.

250SX Winner: Adam Cianciarulo: We don’t know the full list of riders racing each coast yet but put me down for Monster Pro Circuit’s Adam Cianciarulo as an Anaheim 1 winner and even a 250SX West title. The Boy Wonder has finally figured out his shoulder issues and has had a full off-season for maybe the first time. And he finally won a 250MX national near the end of last season. So this is it for the new #92, his breakthrough year starts now. Yes it’s taken a little while but better late than never!