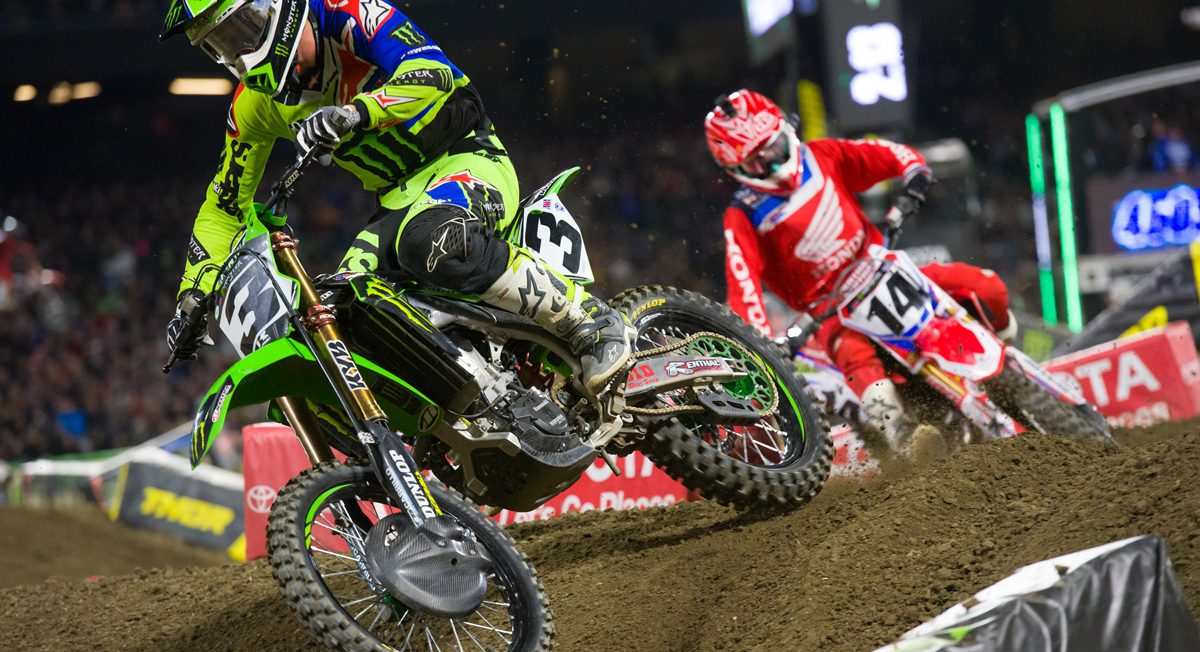 All change at Anaheim. While the first of the Triple Crown was the biggest talking point of this third round of seventeen there was another lurch for the series with Eli Tomac blasting back from a left shoulder injury (“I just hammered it, and I needed time”) in front of a stadium that, again, saw the spectators turn out and offer a public display of rude health for the sport.

The sense of unfamiliarity began through the afternoon. Southern California is enduring some unstable winter weather with brisk temperatures, winds and even the occasional shower hitting the Angel Stadium on Friday. Saturday was deliciously sunny as the riders pondered a programme of qualification sessions where lap-times would count towards an evening show consisting solely of the six main events, each one increasing in duration.

Supercross has morphed over the years and has flexed between Heats and Semis so the first Main Event triple bill was not a complete shock to the system (and many of the top tier riders are used to a similar run-down at the Monster Energy Cup, now seven years old) but it did require an alternative strategy. The 250s ran 6, 10 and 12 minutes while the 450s had 8, 12 and 15.

The top five of Cole Seely, Justin Brayton, Blake Baggett, Weston Peick and Josh Grant was not your typical 450SX leaderboard in the opening Main Event and the fact that Eli Tomac and Jason Anderson only had time to make their way to 5th and 7th showed the tight margin. The race rewarded a start, consistency and intensity and left endurance aside. 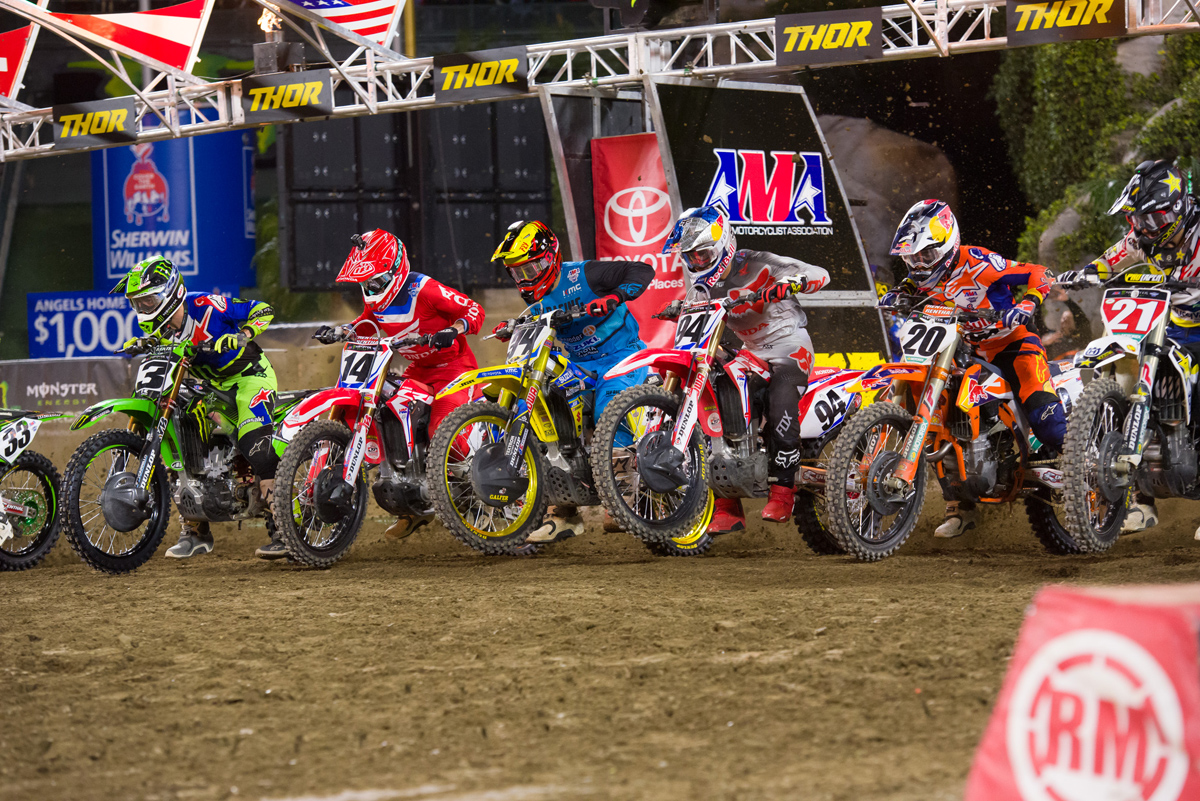 The second affair already had people working at their arithmetic – arguably the only downside to the Triple Crown and abandonment of the simplified single Main – and with Tomac profiting from a bobble by the otherwise sharp Seely the top six/seven riders were aware of the implications for the final outing. Anderson’s pursuit and despatch of Grant was another of the action highlights.

Anderson, his Husqvarna hooking up well in the turns and he was noticeably more manoeuvrable than some of his rivals, chased free to win the last race from Tomac as Seely fluffed the crucial final start and said he ran out of energy to push as he arrived back to 7th and still sealed second overall. Tomac said he was happy just to be competing and looked slightly bemused to have earned his first spurs of the season.

Elsewhere and Ken Roczen – ninth overall – admitted he was riding tentatively with the thoughts of his horrible crash and injury twelve months earlier on his mind. “I was riding on eggshells,” he said in the paddock afterwards. Fellow European Marvin Musquin managed to gather ten points after a week of recuperation on his shoulder problem but pulled off the track in the last dash after over-extending the joint. The Frenchman is now again in a race against time to find fitness before round four. 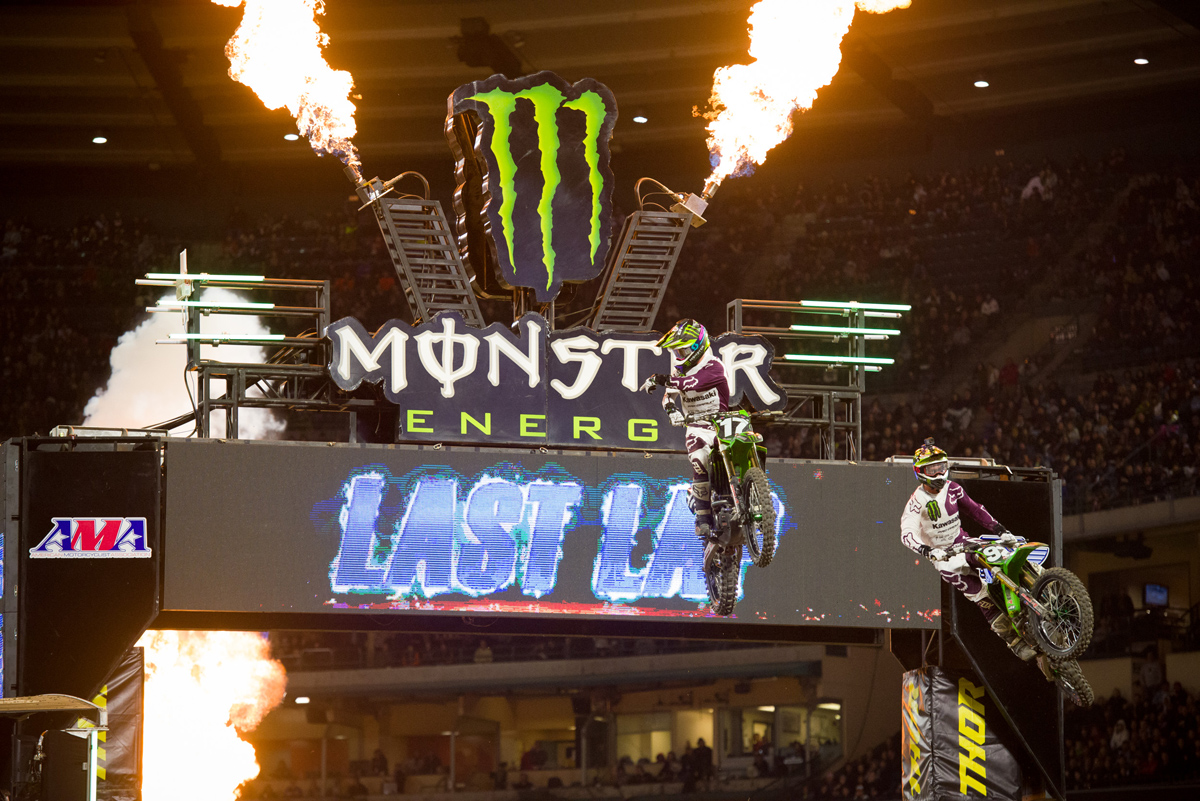 In 205SX Joey Savatgy shone on a track that was quick and undemanding (it actually seemed similar to the Paris Supercross) with two wins and a second place. #17’s first words on the podium referenced a personal and uneasy period after that memorable climax to the 2017 East Region series at Las Vegas where he lost the title two corners from the chequered flag to Zach Osborne. Shane McElrath ties with the Pro Circuit rider in the standings while Christian Craig was a reluctant third place. Adam Cianciarulo can perhaps feel satisfied with his strong last Main and fourth overall after smashing his head hard at the end of Qualification. He pushed Savatgy hard to the flag and the gap between the KX250Fs was just two tenths of a second.

Did the Triple Crown work? In terms of the riders the reaction were mixed. Craig candidly pointed out that the podiumees would have a positive spin on proceedings due to the results and McElrath was the most glowing. “It was ultimately three sprints but it was a really good racetrack this weekend,” the TLD Red Bull KTM man said. “I think people got confidence from the short distances; it was probably the most fun I’ve had at any race.”

Others were slightly guarded. The novelty factor was applauded but the frantic nature of three starts and the race lengths created a different landscape. “A lot of guys can go fast for eight minutes…and that was the gnarliest part,” said Anderson, who lamented the lack of time in the first Main in particular. “I was lucky to be able to come back to seventh.”

For the fans the vast TV screen could have been used to flash up current scores after the second moto (could paper cards be given out to allow fans to fill-in and track progress of the riders themselves or an interactive App help promote even more engagement?). In terms of the overall picture there was not much assistance to inform people as to the potential drama unfolding. If Seely had gained another two places then he would have levelled on points with Tomac for the win but it was not easy to arrive to that deduction.

It did also feel drawn out. Could two races be better? Two motos is a tried and tested formula after all. The track was more of a playground, that helped bunch riders together but didn’t reward the more technical racers. “I think there needs to be little things to separate [the riders]. The whoops seemed big in the photos but on the track walk it was like they had been cut in half,” said Craig.

Parts two and three of the Triple Crown will occur at Atlanta on March 3rd and Minneapolis on April 14th. Supercross reverts back to normality for round four in Glendale, Phoenix next Saturday.