Roczen riding it out

So ok, we’re three races into Kenny Roczen’s comeback to the sport after a horrific arm/wrist/elbow injury suffered last year at Anaheim 2. And ironically, the third race took place at Anaheim. For the second time. Hence it was “Anaheim 2”.

We think of these riders as robots, capable of jumping tall buildings in a single leap on a 450, in peak physical condition and, much like a Terminator, incapable of feelings.

Well, Roczen’s back and this past weekend was perhaps one of the worst races we’ve seen him have in his AMA career. Bad starts, getting caught and passed and generally looking rather, well, ‘human’. A good final race of the historic supercross Triple Crown ended the night decently for Roczen…but it seemed like afterwards it was hard for him to not think about what had happened twelve months earlier.

“I was riding like on eggshells, but also on the start I didn’t feel like myself. So then having the crappy starts and just ping-ponging around and not riding good by any means,” Roczen told me at the end of the night. “The worst part was that after the first one and I knew I didn’t feel good and what-not, andI had two more mains to go! So that was not necessarily fun. But honestly I’m just happy that this weekend is done.”

Roczen’s 11-12-4 scores were only good enough for ninth overall and through the first three races his 4-2-9 scores leave him in third place in the points and thirteen points back of leader Jason Anderson of the Rockstar Husqvarna squad.

Anaheim 2 2017 produced a bad injury for Roczen and there were serious doubts on whether he would ever be the same rider. After three races I’d say he’s been very good…but he hasn’t been as amazing as he was before the injury. Will he ever get it back is a tough question; but it’s hard to judge anything after A2 in particular because it was clear he wasn’t the same guy. 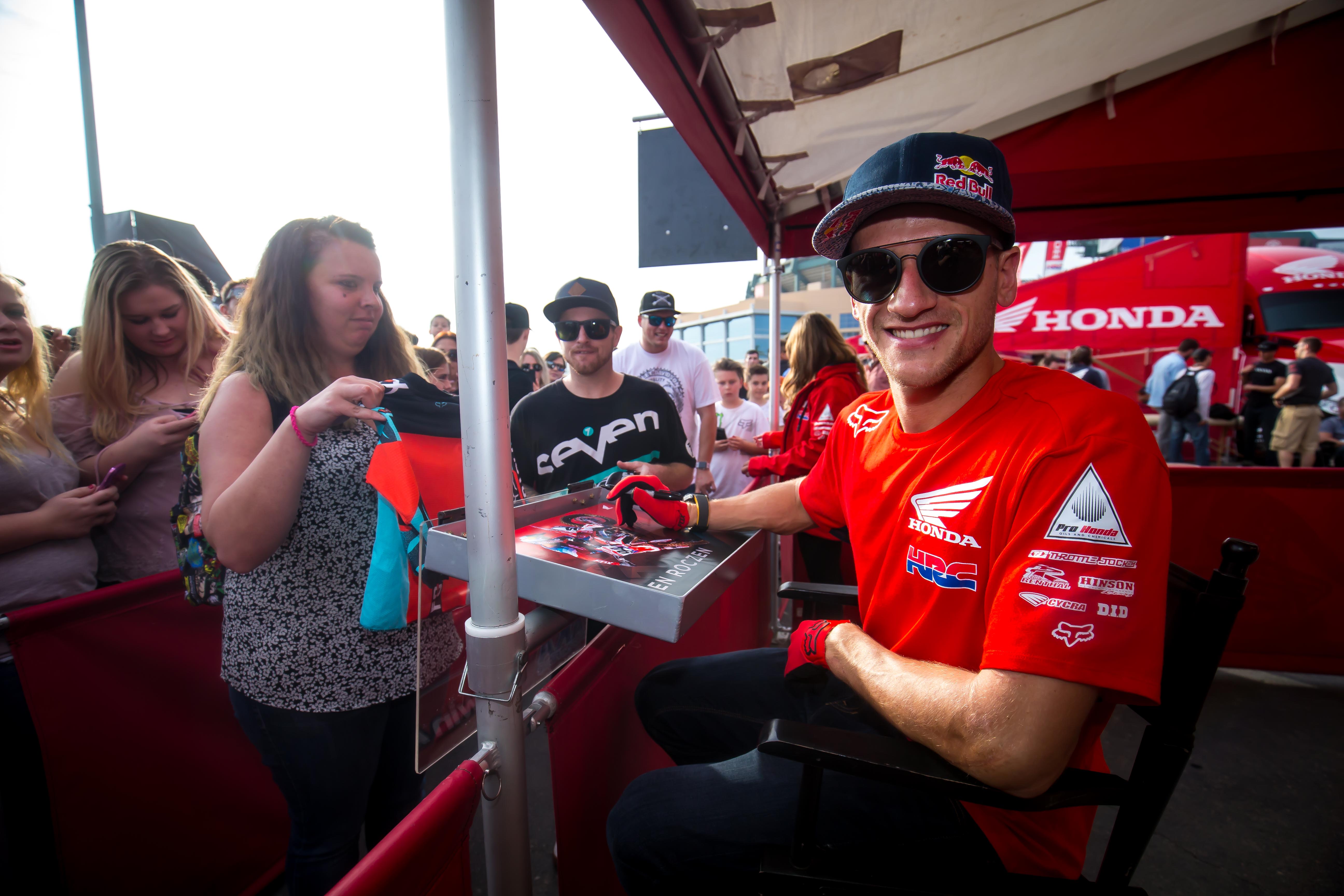 “Something was up. I can’t really pinpoint this exactly but I think it’s just lingering from last year. It’s just there, whether you want to accept it or face it,” admitted the almost-always-honest-to-a-fault Roczen. “It might not be right in the front of your head, but it’s somewhere in there. Definitely not our night, but I’m glad that this one’s done so we can move on to next weekend.”

So Roczen’s comeback so far has probably not been as good as some of his fans thought it would be and, as I’ve said, he’s looked more ‘human’ out on the track than maybe I’ve ever seen him but I think he’ll raise the game. He was allowed to have some emotions at the same race where it almost all ended for him. Then again, he did ask if he could wear the same style/color and brand (Shift instead of Fox) that he was in a year ago. If I’m trying to get away from a traumatic incident I’m probably not going to wear the same outfit but hey, that’s just me! 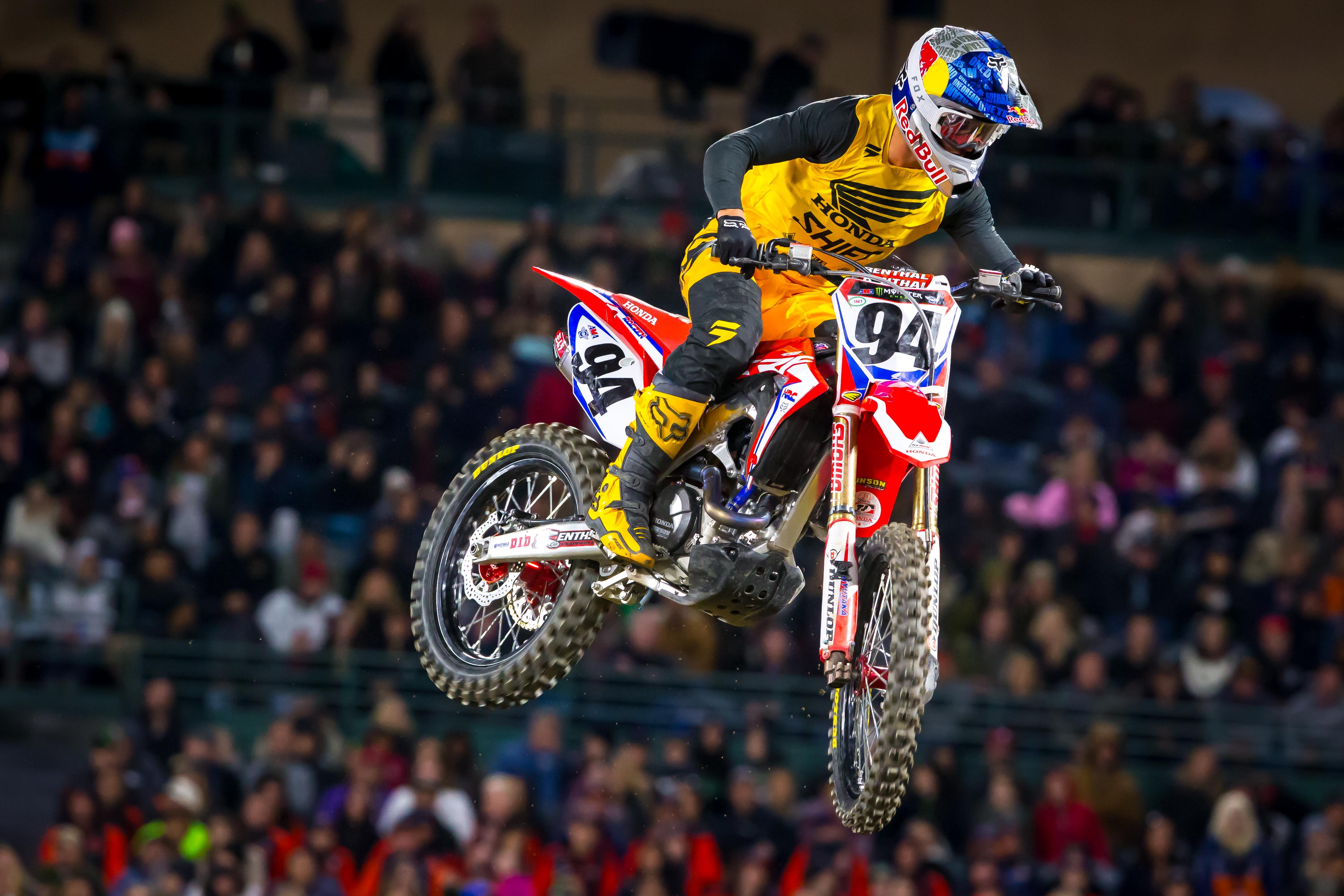 Anyways, we’ll all wait for #94 to get back to his usual awesome self and it’s still very early. I asked him exactly what he thought about his season so far after three races and you could tell the usually very confident Roczen is taking the long view. “The best part is that we are not where we were last year, which was in the hospital! So it’s a huge step that we made in the right direction and we’re just so happy to be healthy. From here on out – and I said it before – I don’t want to have any too high or too low [moments]. So, I hope that this was my worst weekend. We got to click off the podiums and wins for sure. Got to be patient.”

A smart outlook for sure and whether or not he wins or loses the titles, some would he’s already won just by being out there.