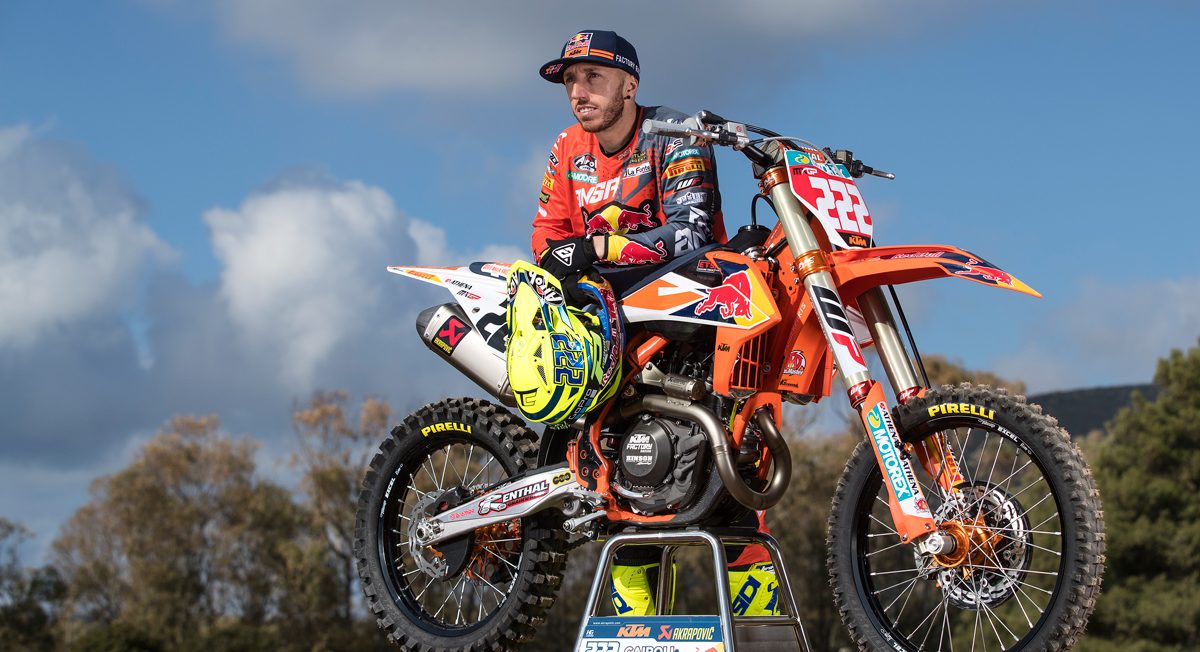 Does Tony Cairoli need to be beaten?

Regarding the title: this obviously depends on your opinion of the 32 year old and his extended mark on the sport that now reaches fifteen world championship seasons, more than 200 Grands Prix, nine titles, 83 wins and some 163 moto victories among almost 300 top-three moto appearances. #222 is a force of numbers as a consequence of his brilliance.

2017 was a fantastic new episode in the saga of a scrawny Sicilian obliged to leave his home for the Italian mainland at the age of fifteen to advance his career. 2015 and 2016, those injuries and limited performances had raised questions. Mostly concerning Tony’s position on the hill of sporting achievement, and whether he was already on the downslope as younger and more vivacious characters seized MXGP and scurried up to catch him.

Cairoli dug his flag a little deeper last year. To emphasise that his return to the peak of the sport was not solely about conservative consistency fitting of a ‘veteran’, he produced some thrilling sights to remind motocross and motorcycle fans of his capabilities and seemingly stubborn youth.

What now? As the original ‘rookie’ MXGP FIM Motocross World Championship winner in 2009 Cairoli has owned six of the last nine contests in the premier class. 2018 will be his tenth attempt at mastery with a 350/450 and, fittingly, it could bring him level with Stefan Everts on ten career titles; a total that was deemed ‘uncatchable’ when the Belgian retired in 2006 (when Cairoli had just one crown to his name). And he’s signed to KTM until 2020 for three more shots at the apple.

For this reason alone Tony could be willed to yet more glory, much in the same way that Valentino Rossi is romantically supported by thousands in his sustained charge to rule MotoGP again for a tenth time; the 39 year old’s last triumph coming ten seasons ago. 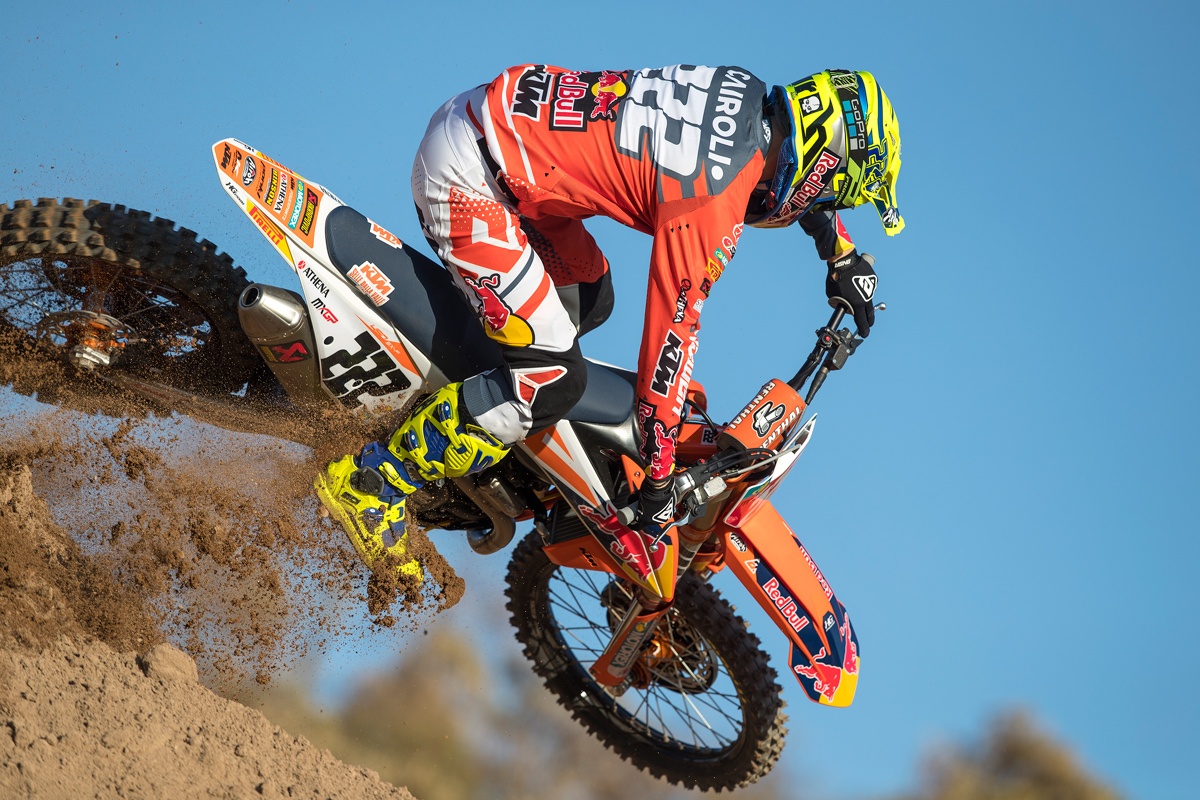 Cairoli has been dealing with questions about his motivation for a number of years now. A desire to be world champion once more after the ardour of 2015 and 2016 is completely understandable; a rider with his pride and zeal for the sport would not want to stare at a slow slide from the winner’s circle hampered by physical problems (even if this is the primary cause for most decorated motocrossers to unwillingly ‘pass the torch’). Tony extinguished a lot of personal angst in 2017. Those persistent queries in regards to his reasons for continuing to weather the mental and physical blows of the sport will echo on with the ‘10th title’ angle.

For his last two years with Yamaha – 2008 and 2009 – I wrote Tony’s personal column/Blog and looking through one of them recently I spotted this line from May 2009. “I really like to set new records. I am satisfied with my career so far and I am happy that people might be starting to take more of an interest in motocross because of the results.” This was said when he was 23, the same as Jeffrey Herlings now and with the Dutchman renowned for his preoccupation with milestones and leaving his footprint in motocross, the ‘records’ part hints that Cairoli is also moved by the idea of carving his name into the sport’s stone. At that stage he trailed the likes of Alessio Chiodi for accolades but by September had bagged the first of his gongs in the blue ribbon category and would hunt six more as #222 became the personification of the ultimate skilled and savvy constructor of championships. What athlete at the top of their game doesn’t think about a possibility of immortality? Records simply mark a point in time and I believe it is part of a naturally competitive psyche to shoot for some target if the field around has been defeated.

Of course Tony has won much more since September 2009. He has set new benchmarks and is a clear second to the Everts-behemoth in most aspects. That urge to “set new records” may have long dulled, particularly when the extent of his achievements and fame in Italy is so visible and tangible and he can see how he has substantially spread the word of motocross.

Cairoli has the Italian propensity for flair and his own style but he is also a modest guy. Reaching double-digits for those framed FIM certificates will be a splendid bonus in a remarkable career but it won’t be a do-or-die crux. He will bat away talk of No.10 easily and frequently – a old and quickly-learned trick of pressure redirection – but every time he extends his lead at the top of the MXGP standings or reduces the gap to a rival in 2018 it will bubble close to the surface.

2017 was a great story for Cairoli and MXGP: the comeback of a ‘great’ and the confirmation of his legend. It brings his sporting chronicle tantalising close to something truly remarkable. KTM Sport Director Pit Beirer credits the balance he has in his personal and professional life as reason for the longevity. 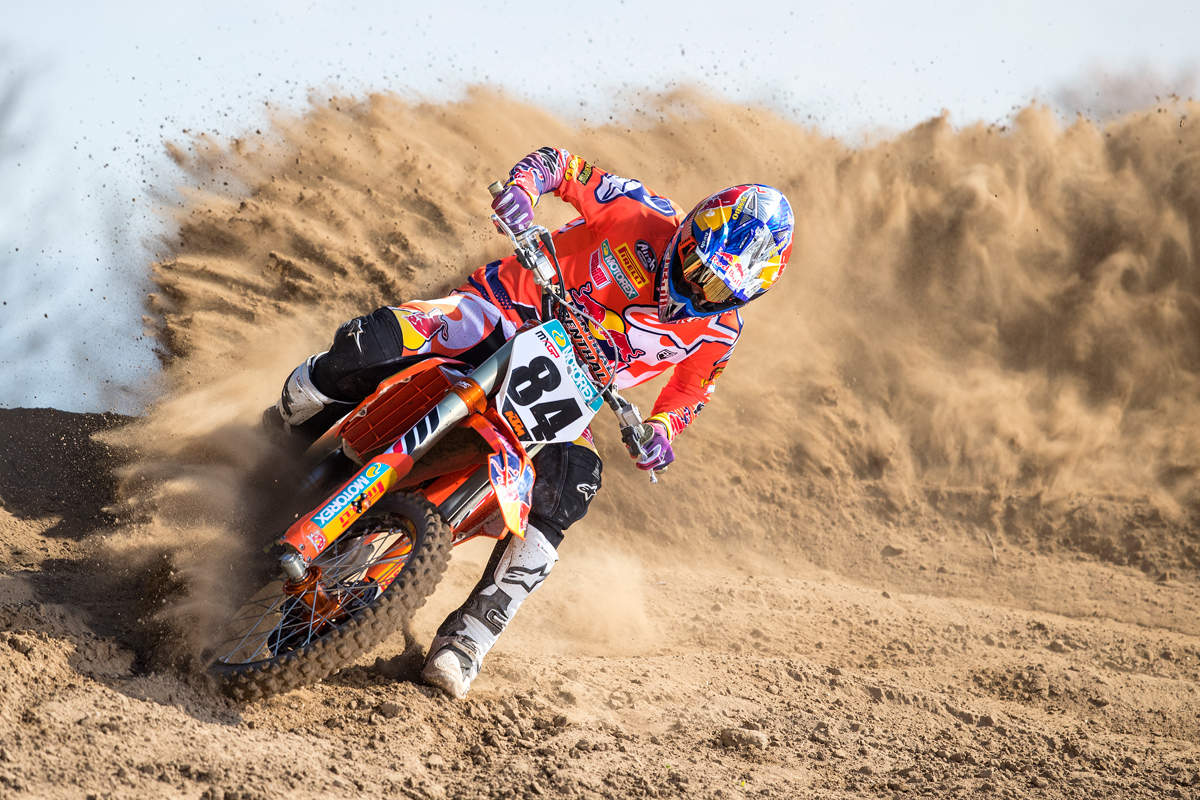 Was it – and should it be – the last hurrah though? Herlings is undoubtedly the standout threat for Tony due to those five wins from the last six rounds (it would have been six from six if #84’s chain had not let-go in Sweden) and the same starting prowess thanks to the works KTM – even with the brand new 2019 prototype that the team will roll out in Argentina. Cairoli may have been tapering-off his risk-taking in the second phase of 2017 while his rival was flying but Herlings looked so strong once he’d figured out the demands of the class that he rarely had any peer. MXGP Fans had unexpected diversity in 2015 and 2016 with two rookie champions after a six year Cairoli-run, but a second phase of #222 dominance might not be welcomed with the same reverence.

Herlings is hardly an underdog or a rider starved of acclaim – he has 67 GPs wins at 23 compared to Tony’s 87 at 32 – but he is perhaps the brightest star in the category since the dual emergence of Cairoli and a young Clement Desalle in 2009 (Gautier Paulin – a winner in his first race with the 450 in Italy at the end of 2011 – also has a shout at the same exciting status). Cairoli’s fiercest rival could be one that is a only a few metres away from him in the awning every weekend and not since 2004 and his first term with Claudio De Carli and alongside Claudio Federici could the Italian contemplate a teammate that is just as able and potent as himself. 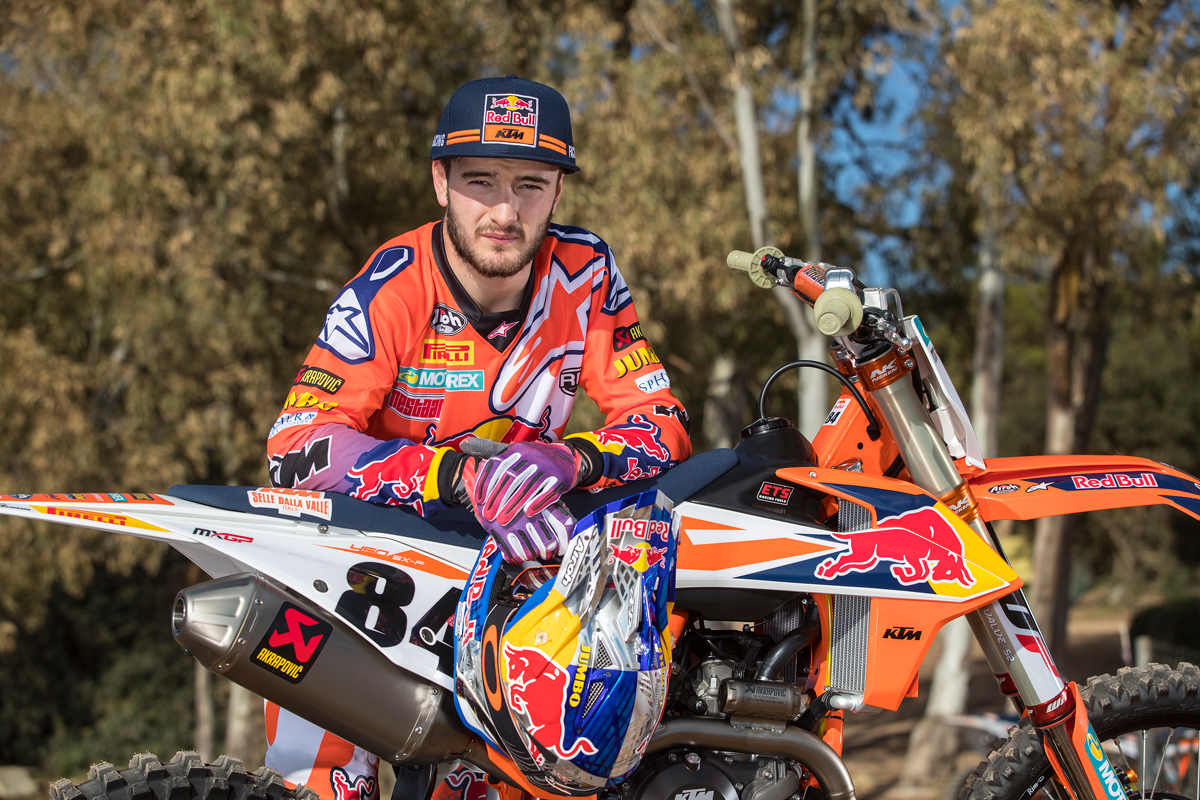 That proximity could be the spur that Tony also needs to excel once again. To defeat Herlings on the same bike and with the momentum he generated in 2017 would be some accomplishment. Should the pendulum swing and it is Jeffrey’s turn then MXGP could be looking at the start of another hegemony. There is slightly less predictability with Herlings though. He might well have been part of the Red Bull KTM set-up before he was legally allowed to vote but there is a nagging feeling that he could be swayed by big money offers or the enticement of another challenge with another team. Cairoli was heavily courted by Suzuki at one stage in his career but knew the chemistry he had with De Carli and the same band of mechanics was all he needed to fulfil his goals.

However, to ruminate solely on KTM riders for 2018 is not only a disservice to another high calibre gathering in the MXGP gate but also ignoring the spectacular edginess of the sport and its often cruel twists and turns. Like it or not, chances and opportunity is running out for athletes like Desalle, Paulin, Van Horebeek, Simpson, Searle, Strijbos. Timing and budgets can something skew a career and close that narrow window of fate; just look at the situations for Evgeny Bobryshev, Max Nagl or even Arminas Jasikonis and Benoit Paturel. Tim Gajser is enduring his own dark days after two ground-breaking years of back-to-back plunder. Cairoli and Herlings have proved that there are ways to return to the top after adversity but they have to be wise to the rider or two that grasps every possible crumb of the cookie in ’18. After all, somehow, there could be an even better narrative than a KTM victor.