Qatar had all the nerves and ‘unknowns’ of a first race and this had an influence on practically every component of a team and the championship; not just the riders’ predisposition. New Michelin Motorsport Two Wheel Manager Piero Taramasso shed some light on a few facts about the brands work in the MotoGP series…

Michelin know where the rubber is at all times

“Each tyre has a serial number and we can follow it from the building process to transport and then when it arrives to track. We can see if it has been fitted or heated or re-fitted. We check the storage temperature and try to understand if there are any problems then where they might have come from. Thanks to the sensor we have access to the tyre in ‘live time’ when it is being used.”

“We know which tyres are where for a race and when they are new and have not been fitted or warmed. We have some tolerance and each rider has one ‘race’ tyre and we tell them “this is the best one, so keep it for the race” and if there is another that has been fitted or warmed before then we inform then to use for say Free Practice 1. A tyre does not get worse after being warmed or fitted but we inform and advise the teams anyway.”

“Tyres are numbered and put into ‘blocks’ for a fair spread of rubber and then the list is give to IRTA who randomly assign them to teams. 24 sets are given out.”

Each MotoGP tyre is mollycoddled

Yep, MotoGP race rubber probably has a more comfortable journey to each circuit than a hefty majority of the paddock. “We monitor all storage temperatures and have a target of 20-22 degrees. The [shipping] container is temperature-controlled and in Europe we transport the tyres with an air-conditioned truck. The tyres are not placed in metal racks but are hung in hammocks.”

However the fate of any defective tyre is a little more brutal on its return to Clermont-Ferrand. “We cut it open and do chemical analysis and look at all the original properties of the compound and if they were respected. We look at the transport temperature and how many times it was fitted or heated: a lot of work.” 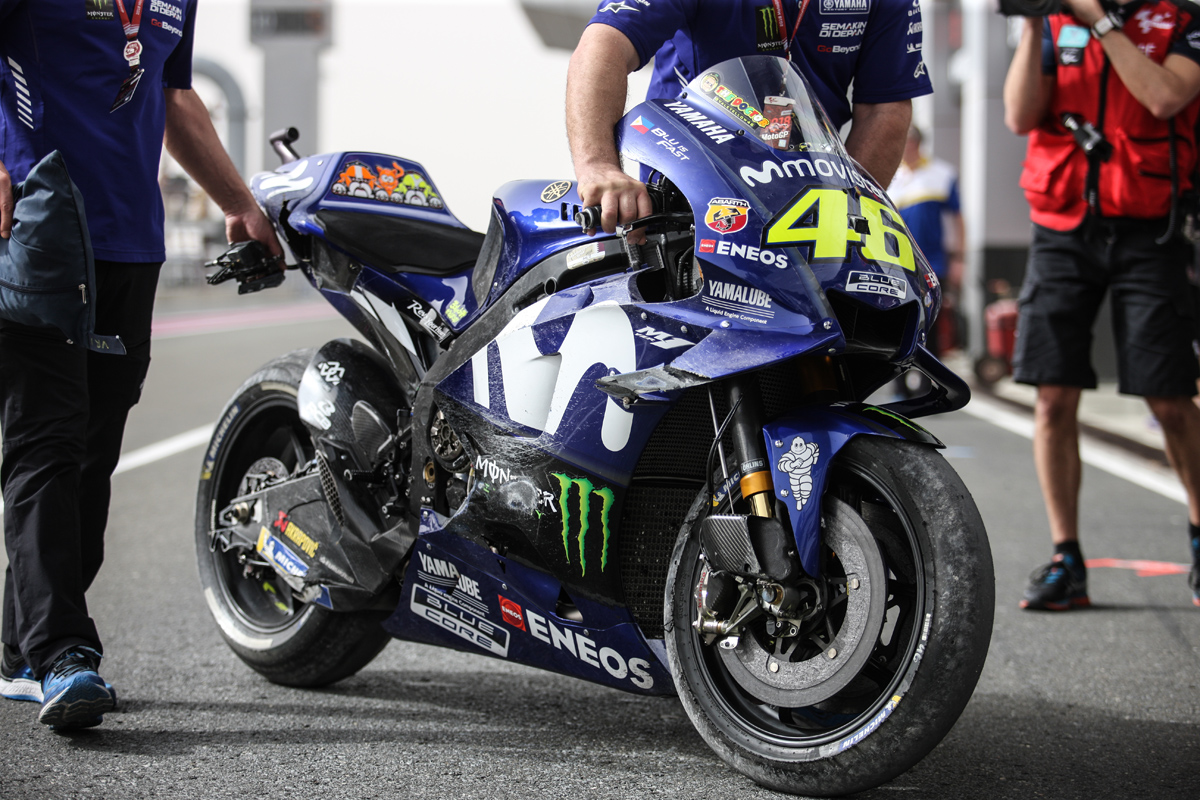 The life span of a tyre

Moto2 and Moto3 races not only help to clean the track for MotoGP but also leave skim of Dunlop to help for grip. Still, as you’d expect, tyres only last so long. Like manufacturers whom provide time or kilometre guidance on bike components Michelin are equally, if not much more diligent on their watch. There is an enormous amount of logging and data registration goes into the life cycle of every single tyre, whether it is spinning or being warmed.

“We are working on a mandatory system from 2019 that will record how long a tyre is kept in a warmer. We will put a threshold of say 85 or 100 or 150 hours and then the tyre is no longer usable for the GP. We make tests on the tyres after five-six days, so two GPs, and we put it out-of-stock. This is the maximum it can be warmed. We advise teams to keep the tyres warm all the time; they switch the blankets on in the morning and off in the night. The blanket temperature is 90 degrees and the tyre compound works at more than 120; so it is at the bottom level. From our test we know that the heating cycle does not affect the grip but might affect just a warm-up lap, so it might take a bit longer to be in the right conditions.”

Michelin have frozen development of tyres during the race season, after pressure from areas of the paddock. “Riders and teams asked for more stability. In 2016 we changed a lot: compounds and front and rear casings and riders were complaining and could not prepare. Dorna asked us to provide a list for all the races and that way we can freeze the tyre allocation like engines and bodywork are frozen. This way we can prove that the tyres will be the same and riders know what is coming.”

Understandably for the French firm this is not ideal. “This is not our goal because we are here to develop the technology and the compound and to improve the tyre: so it was not the best idea for us but because the request was made we did it. The only development we can do is during the winter tests and we came with two more front compounds this year and when they were validated we put them on the list.”

The company get frustrated by the rider gripes

Qatar saw the issue of tyre performance – particular on the front wheel – come to the fore. Perhaps Johann Zarco’s fade from being the leader to eighth position was the clearest example. Other comments by riders across the weekend pointed to some inconsistency in the grip; one racer even remarking that Michelin’s rubber could be a championship-deciding factor. The blanket nature of supply means total satisfaction will be nigh on impossible.

“We look at the data and people might complain about the grip of a soft tyre and say it was different in, say, the morning session compared to the afternoon but then the conditions were completely different! They might also change a [bike] setting and then it is not an issue with grip but ‘warm-up’ and the rider did not push enough on the out-lap or it was only in the tyre warmer for one hour or three hours. There are a lot of factors that can change the performance of a tyre. But we always listen to all the riders, we look at the data and if they improved the lap-time. The teams can get things wrong sometimes. We had maybe eight complaints on Saturday in Qatar and when we analysed there were maybe two cases with a problem; the rest were complaints without any technical explanation. It is a complicated subject.” 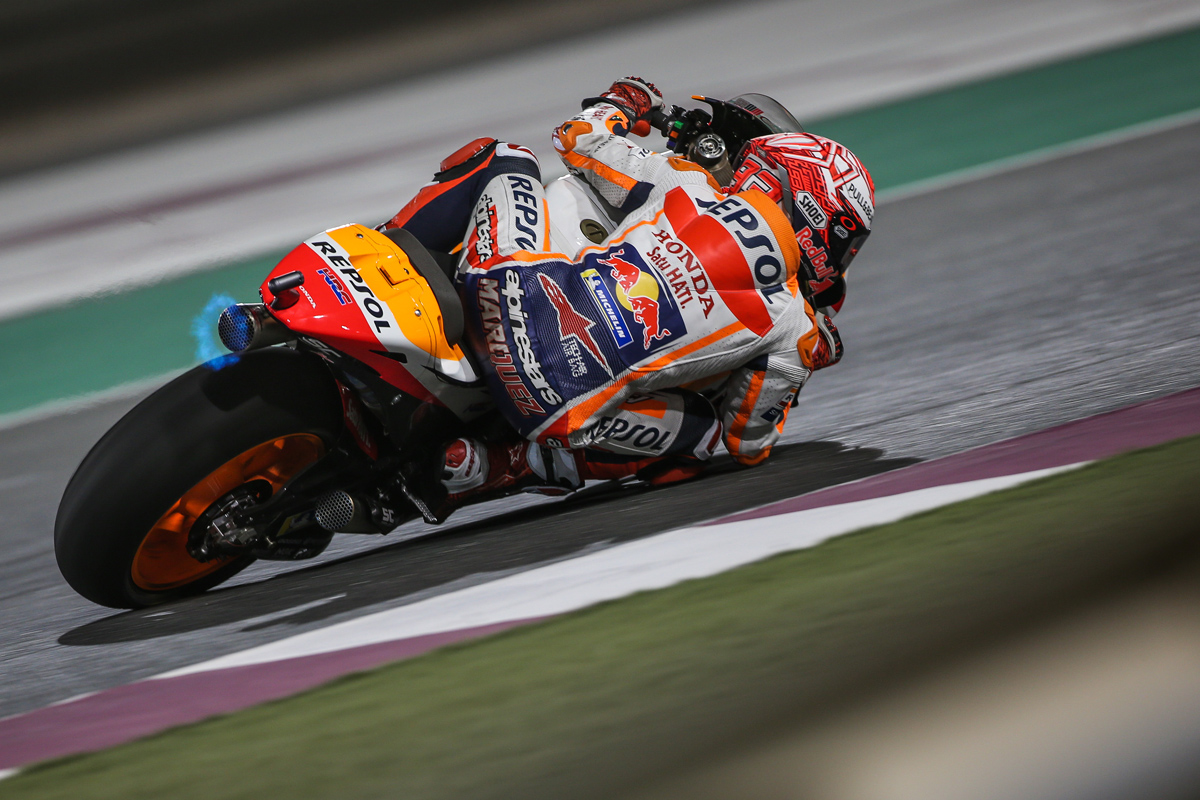 Michelin have helped towards the great parity

MotoGP has had controlled tyres for nine years now. Bridgestone assumed the position as sole supplier in 2009 and 2018 is Michelin’s third season throwing rubber around the paddock. In that time there were 9 different winners in 2016 and 5 in 2017. Along with other elements of the rulebook Michelin feel that their product and service has contributed to the ‘levelling’ of the field and the potency of the show. “I’m happy when I see something like a Ducati, a Honda, a Suzuki and private and factories teams at the front. It means that the tyres are working well for different manufacturers and styles of riding. Last year we proved that even being a single tyre supplier we could have some ‘strategy’ between the soft, medium or hard options and the rider can choose and then manage. It can be exciting.”