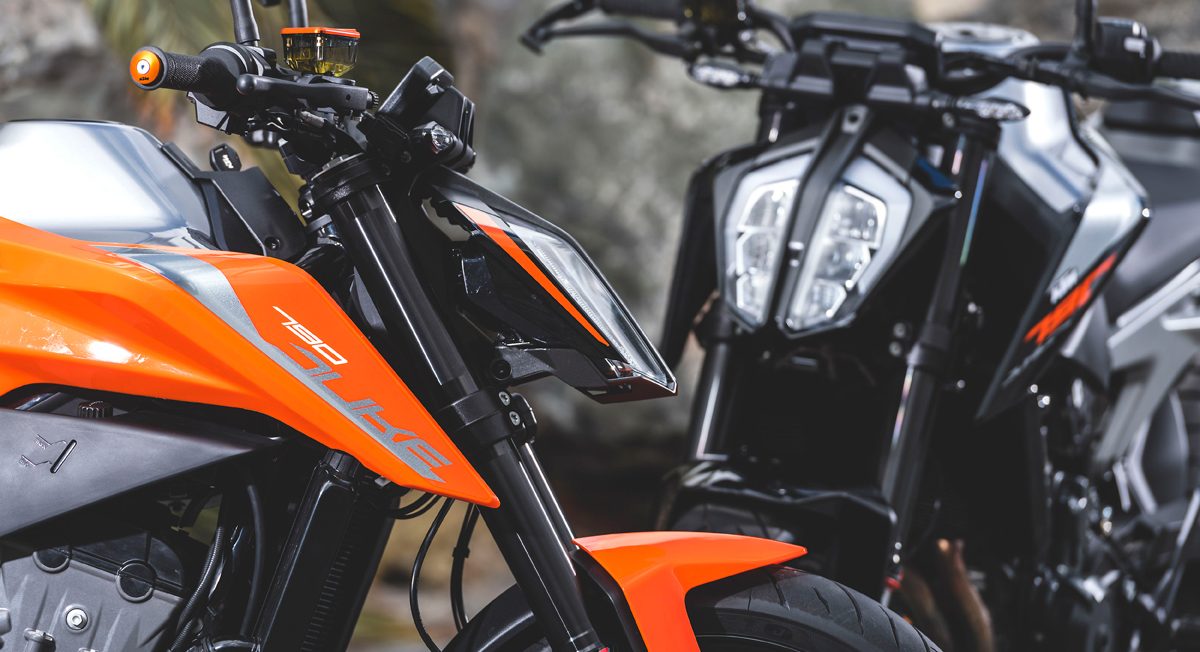 Take the 790 Duke for a blast on a twisty road, and KTM’s new middleweight works so well that you might wonder why the Austrian firm didn’t create a bike like this ages ago. The 799cc parallel twin is engagingly quick, light, sweet-handling and bursting with character.

The Duke is exciting yet rider-friendly, epitomising the simple riding pleasure that has long made the naked middleweight class popular. It neatly plugs the large gap in KTM’s roadster range between the single-cylinder 690 Duke and 1290 Super Duke V-twins.

That impression of simplicity is actually misleading, because the 790 is distinctly sophisticated. Beneath its lean, typically sharp-edged lines, the Duke brings a new level of technology to the class, with features including a full-colour Thin Film Transistor instrument panel, two-way gearbox quick-shifter, and advanced electronics controlled by a superbike-style Inertial Measurement Unit (IMU). 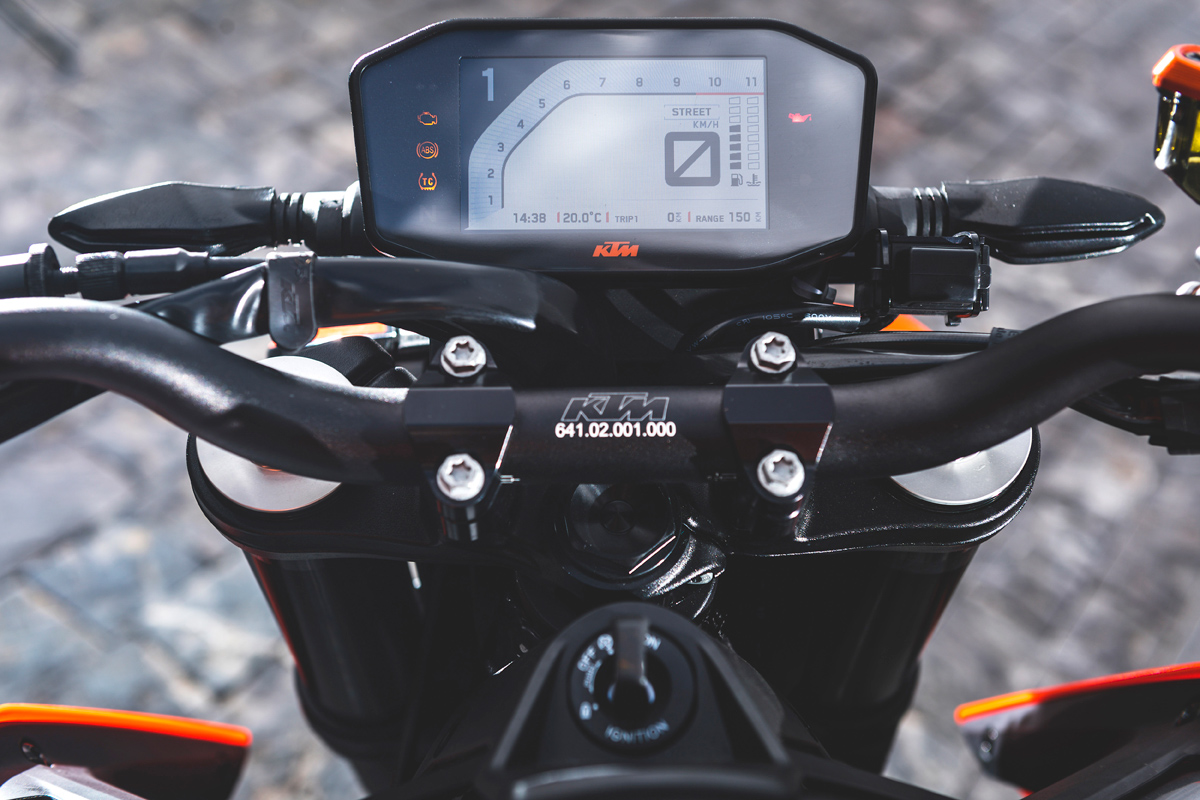 Perhaps the biggest decision KTM’s engineers faced in the Duke’s development was the layout of the all-new engine. They eventually settled on a parallel twin, rather than a V-twin as used by bigger Adventure and Super Duke models, mainly because side-by-side cylinders could be made more compact.

The dohc eight-valve unit has its crankpins offset by 75 degrees to give an irregular firing order like the big V-twins. Twin balancer shafts allow it to be a stressed member of the frame, which in KTM tradition is made from tubular steel. Maximum output is 105bhp at 9000rpm – not the highest in the class, but a healthy figure for a bike weighing only 174kg with fuel. 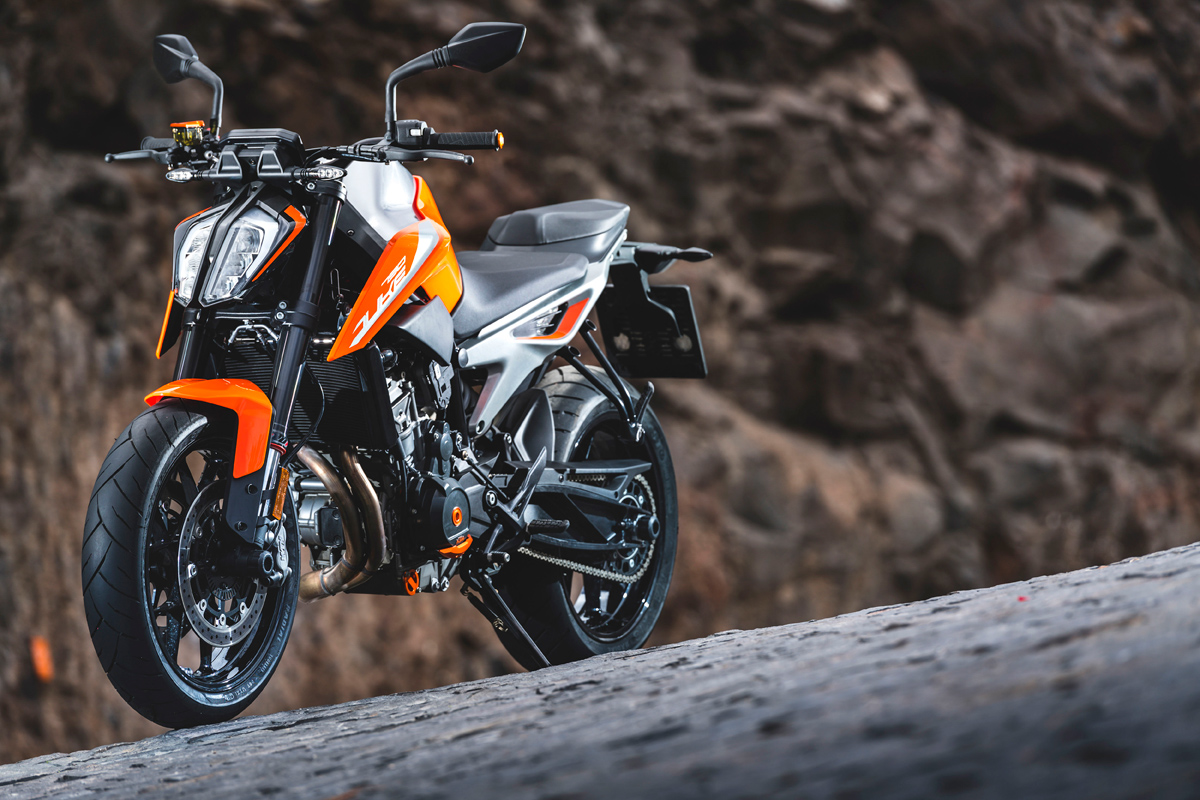 That electronic sophistication begins with the TFT display, controlled via an updated version of KTM’s familiar four-button switchgear on the left handlebar. There’s a choice from four riding modes, including a Track setting that gives extra functionality. On the launch in Gran Canaria I stuck to Street and the slightly sharper Sport (there’s also Rain, which reduces power), both of which give superbly crisp throttle response.

That top-end output is complemented by a usefully flat torque curve. The 790 generates enough midrange torque for strong acceleration from around 4000rpm, and the motor stays smooth even up near its 9500rpm redline. This encourages plenty of revs and frequent use of the six-speed gearbox, as does the quick-shifter, which works sweetly in both directions and contributes to the KTM’s effortless feel. 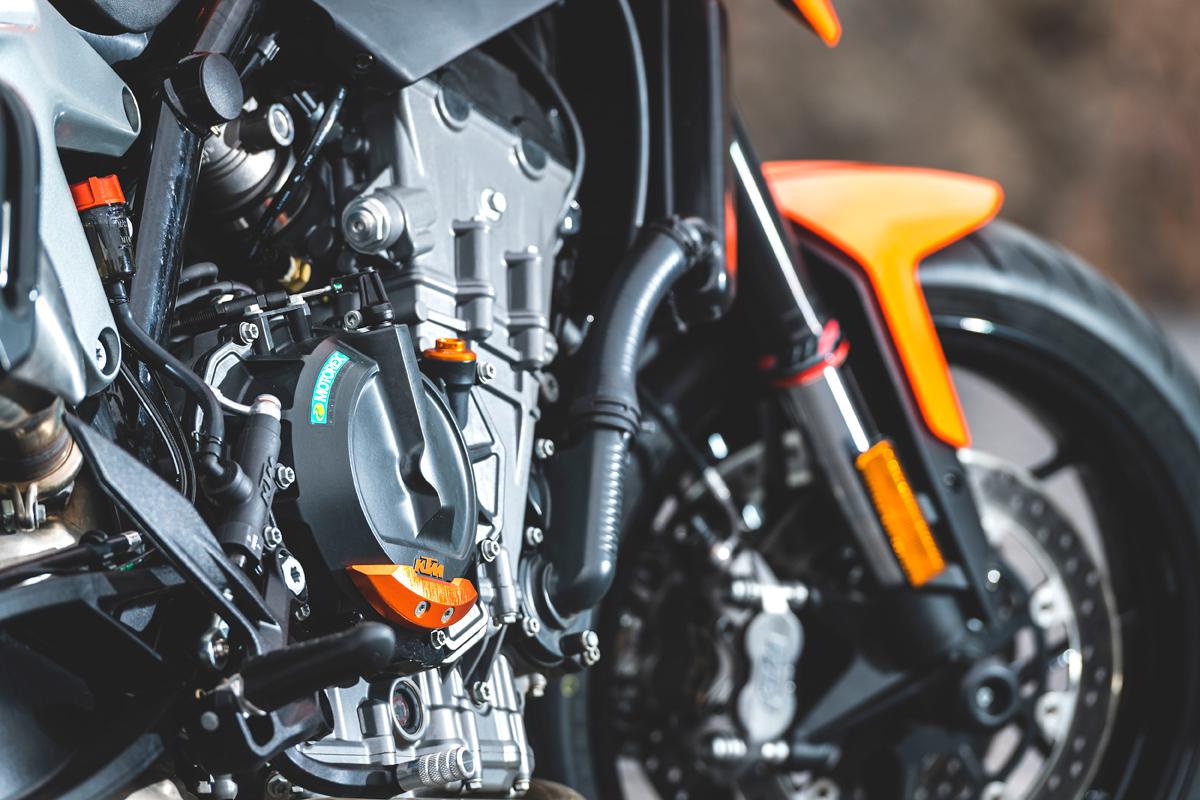 The Duke is more than happy at speed, though inevitably its upright and exposed riding position means you’re fighting the wind long before reaching the maximum of about 140mph. Even at much lower speeds, the parallel twin’s off-beat firing order gives the 790 an involving character and an appealing bark from the high-level exhaust.

The twin-cylinder unit is slightly less impressive in town, when the Duke tends to hunt slightly at constant throttle openings. At least the clutch action is light, and the bike’s fairly low seat and generous steering lock help make it manoeuvrable in traffic. I didn’t find it cramped, despite being tall.

Handling is excellent, combining fairly light steering with confidence-inspiring stability. The suspension, from in-house specialist WP, is fairly basic, with no adjustability apart from shock preload. But both ends manage to feel firm and well-controlled, while having sufficient travel for very acceptable ride quality.

On very rough surfaces the Duke passes on some jarring through bars and seat but doesn’t lose its cool. The balance between agility, stability and comfort feels just about right. And when you’re riding on bumpy, damp or poorly surfaced roads, the Bosch cornering ABS and high-level traction control give an invaluable safety net. 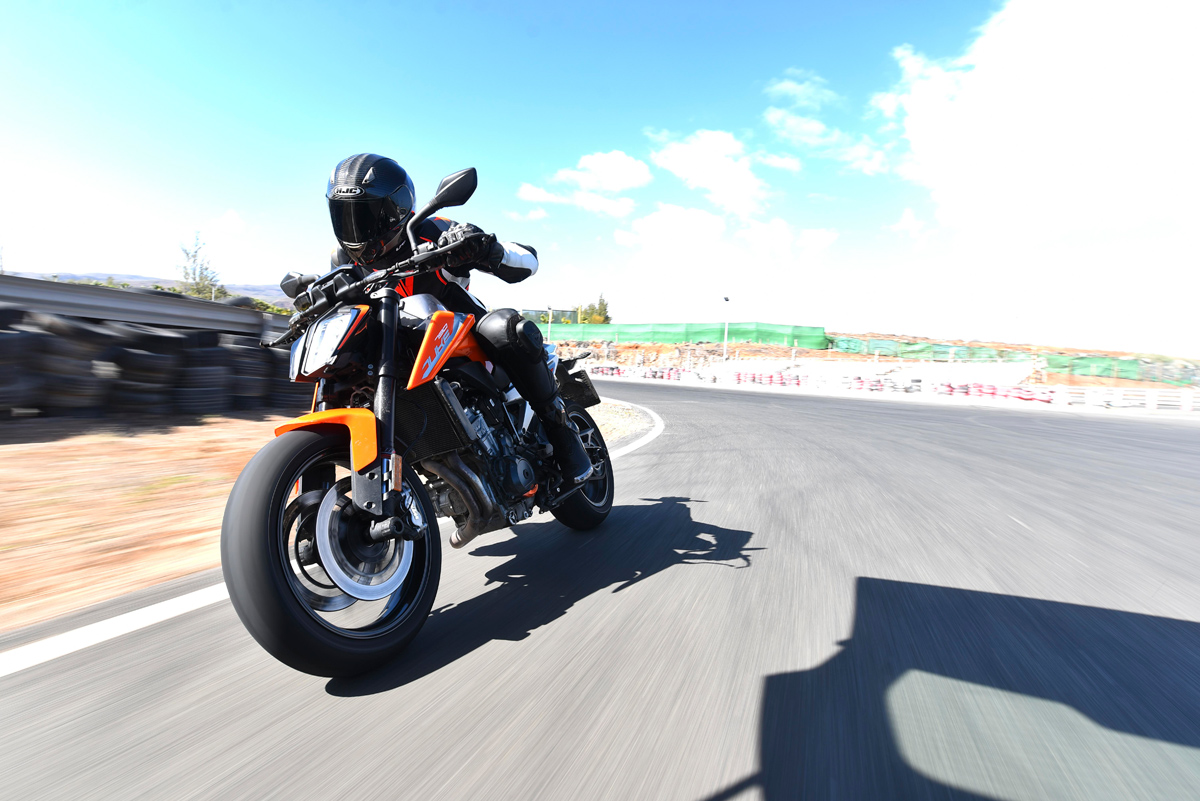 There’s plenty of grip and stopping power, even if the Maxxis tyres and J.Juan front brake, with its pair of four-piston radial calipers, aren’t from particularly glamorous suppliers. The Duke should prove quite practical, too. Fuel consumption averages around 50mpg even with hard riding, giving around 150 miles from the 14-litre tank. Comfort is reasonable, despite the fairly thin seat.

What confirms the 790 Duke as a serious middleweight contender is its aggressive price (of £8499 in the UK). It’s very competitive with natural rivals such as Ducati’s Monster 821 and Triumph’s Street Triples, not to mention BMW’s capable but ageing F800R parallel twin.

And as you’d expect in this modern era of platform-sharing, the first all-new model is just the start. The 790 Duke introduces a parallel-twin family that will grow to include more KTMs – starting with a dual-purpose Adventure model, due next year – and also bikes from sister brand Husqvarna. On this evidence they’ll be well worth the wait.