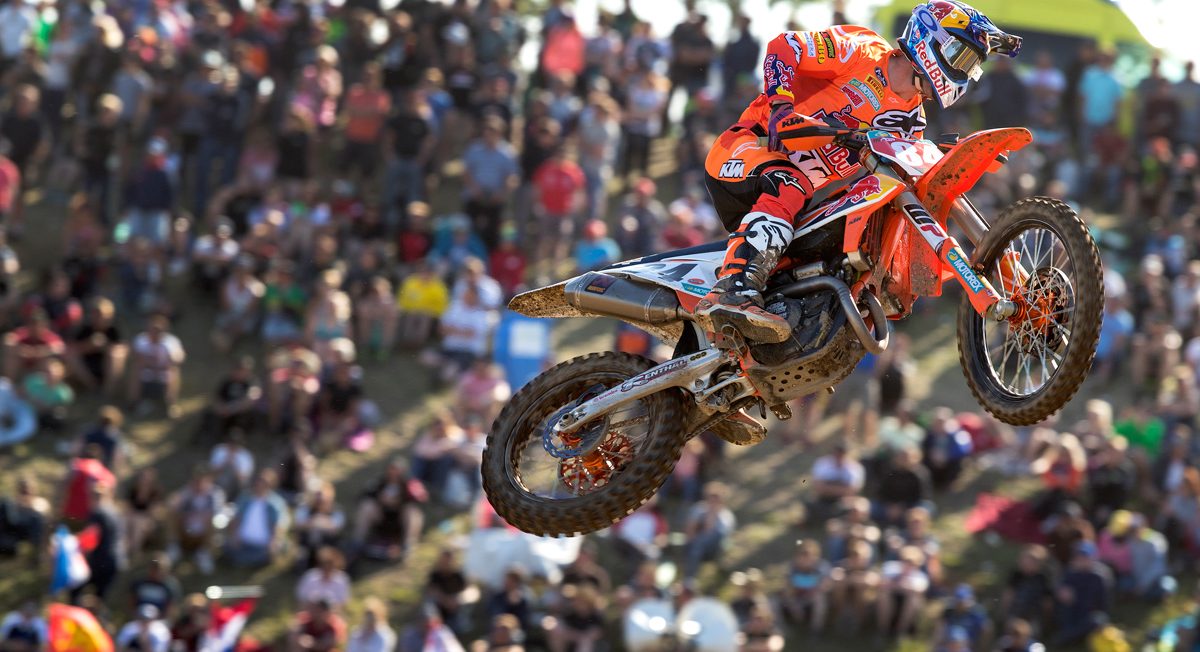 How do you stop someone like Jeffrey Herlings? This is one of the biggest questions hanging over the 2018 MXGP series; a Red Bull KTM-fest well before the halfway stage of the season. The 23 year old has dominated from the front, through last minute, last lap dives, and comprehensive carve-ups that have been achieved with skill, superior bravery, deeper intensity and no small amount of risk.

Herlings is not a serial holeshotter. He doesn’t have that twanging string to his capable bow. He does have a fierce work ethic (as revealed by some of those closest to him in our last issue) and a motorcycle that shows little in the way of weak spots. He also has momentum. five of seven Grands Prix fell his way before the German round last weekend where he added a sixth with a fifth 1-1 sweep of the motos. He already has a lead of one Grand Prix in the standings and Teutschenthal brought a week of complete control to an end with his fourth consecutive chequered flag obtained with ease.

Perhaps one suggestion is to let Herlings beat himself. A racer of such wide-ranging magnitude and experience as Tony Cairoli has looked powerless at times against Herlings’ charge and may be learning towards a ‘sweat-him-out’ policy. Herlings has famously rubbed away two certain crowns – in 2014 and 2015 – through misjudgement and bad decisions. He frequently cites those injuries he sustained and therefore eradicated points leads that touched almost 150 (three whole GPs) both times as one of the biggest and most painful lessons of his life.

The youthful exuberance and swagger at the time is understandable (if ultimately unfortunate) but weak shades of the desperation that led to some of those moments are still visible in his approach and racing today. He sometimes seems to live through the seat of those Alpinestars pants; although it can be tricky to tell just how much a rider is on the limit. The same people that believe Jeffrey could be close to a major ‘off’ at some stage were also those that claimed Romain Febvre and Tim Gajser would also loop out of the scene during their terms of triumph in 2015 and 2016 respectively (both would taste dust in the following seasons but they had entered the record books by that point). 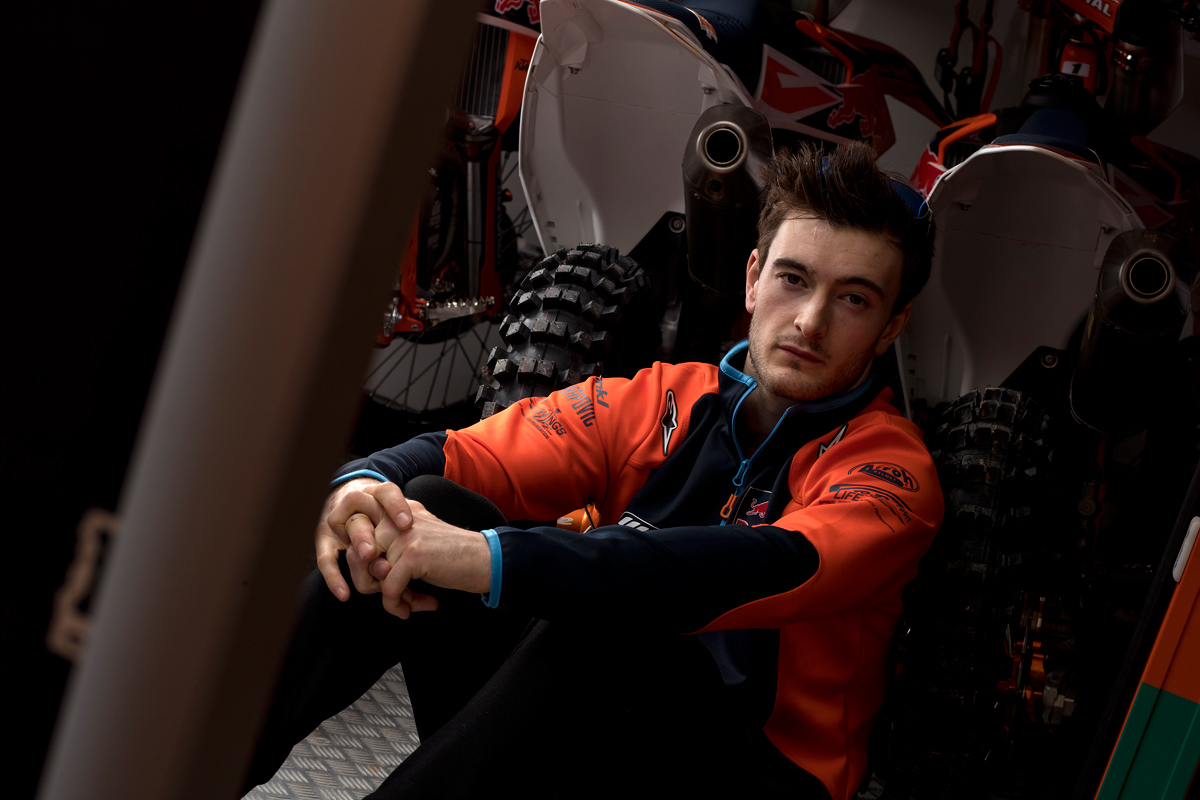 One consideration is to match Herlings’ intensity. “I feel like I leave nothing on the table anywhere at the moment,” he said on Saturday in Germany when quizzed on how he is a level above. “Currently I eat, sleep and breathe motocross and it is hard for myself and on my body and I don’t know how many years I’ll be able to do that. I basically watch every single thing every day to be able to perform at the weekend and it is demanding. The results show some good things. I feel mentally and physically strong and I want to take everything out of my career that I possibly can. In the MX2 days things came easy but now I really have to work for it. It would be my dream if I ever became MXGP World Champion and to accomplish that you have to do everything right. I think this is the best possible shape I have ever been in and until now I haven’t had any setbacks for a long time regarding injuries. In this sport that is hard [to do] and we’ll try to stay in this same spot.”

The odds are against Jeffrey evading every potential knock-out blow in the twelve Grands Prix that remain in 2018, and veterans like Cairoli, Clement Desalle and even a flowering Gautier Paulin could be biding their time. Every MXGP racer walks a tightrope that has become longer each year and we’ve previously observed that it is the moderated and cautious ‘crosser’ that tends to reach the other side rather than just the fastest trier.

Playing the long game and hoping the racing ‘gods’ frown on others is not ideal because it is a philosophy that manifests itself outside a rider’s sense of control: never re-assuring for a professional athlete. Against the weight of evidence in the points – and in front of them on a track when #84 comes flying past and then stands higher than them on the podium once more – it is virtually the only option. The harbinger of hope is that Herlings could drop the ball and allow a slither (or slithers) of a chance. 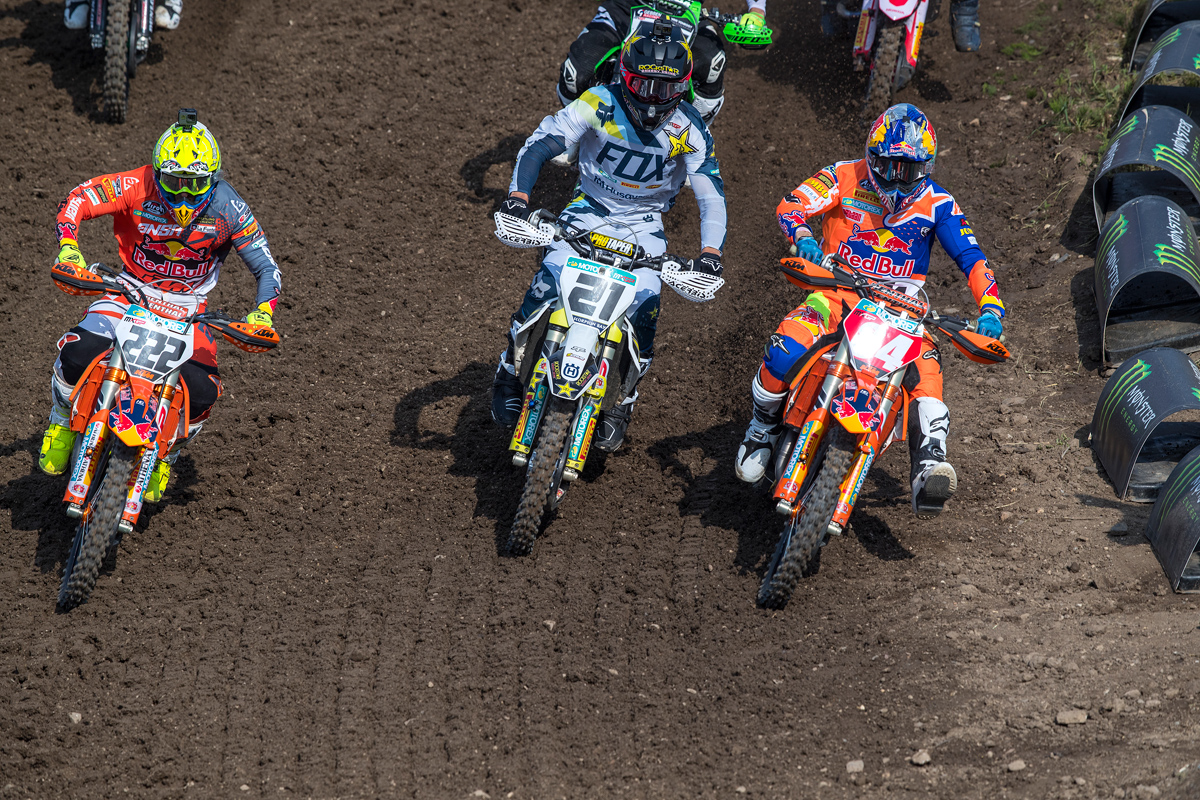 Riders deflect pressure by claiming they need to focus on their own performances. Of course that holds true, but to defeat a mighty foe requires study and analysis. Dylan Ferrandis faced the ‘Herlings quandary’ in 2016 and deduced his only realistic opportunity for the MX2 championship was to rattle the Dutchman and inhibit his starts by cutting his opponent’s line out of the gate. In his style Dylan did this without qualm or quibble and Herlings began to get irate. Eventually it was Ferrandis’ mistake that decided a lukewarm title dispute with his crash and broken arm in Switzerland.

What can the current MXGP riders do now? Resort to more gamesmanship? There is not a great deal of elbow-room (pun intended). Cairoli (along with Desalle, he has been the closest so far) can force the issue and goad Herlings to skirt closer and closer to the edge by continuing to lead from the front, but do not discount the demoralising effect if the plan constantly backfires and it has happened three times already in 2018, one of those coming at Cairoli’s home Grand Prix. Trying to keep pace with the KTM and spooking Herlings into a mistake is probably the hardest thing to do in MXGP, such is the Dutchman’s pace and ability to crack lap-times. Aside from a tactical take-out – and there are very few in the MXGP field that would deliberately set out to do that – then this is not much choice. “Even if we are like rivals you never wish that someone gets injured [in order] to be a champion,” Tim Gajser said to me Saturday evening at Teutschenthal. “Even if he is the biggest rival. I don’t think anybody wishes something like that. We know that motocross is a hard sport and something can quickly go wrong…but we don’t wish it.” 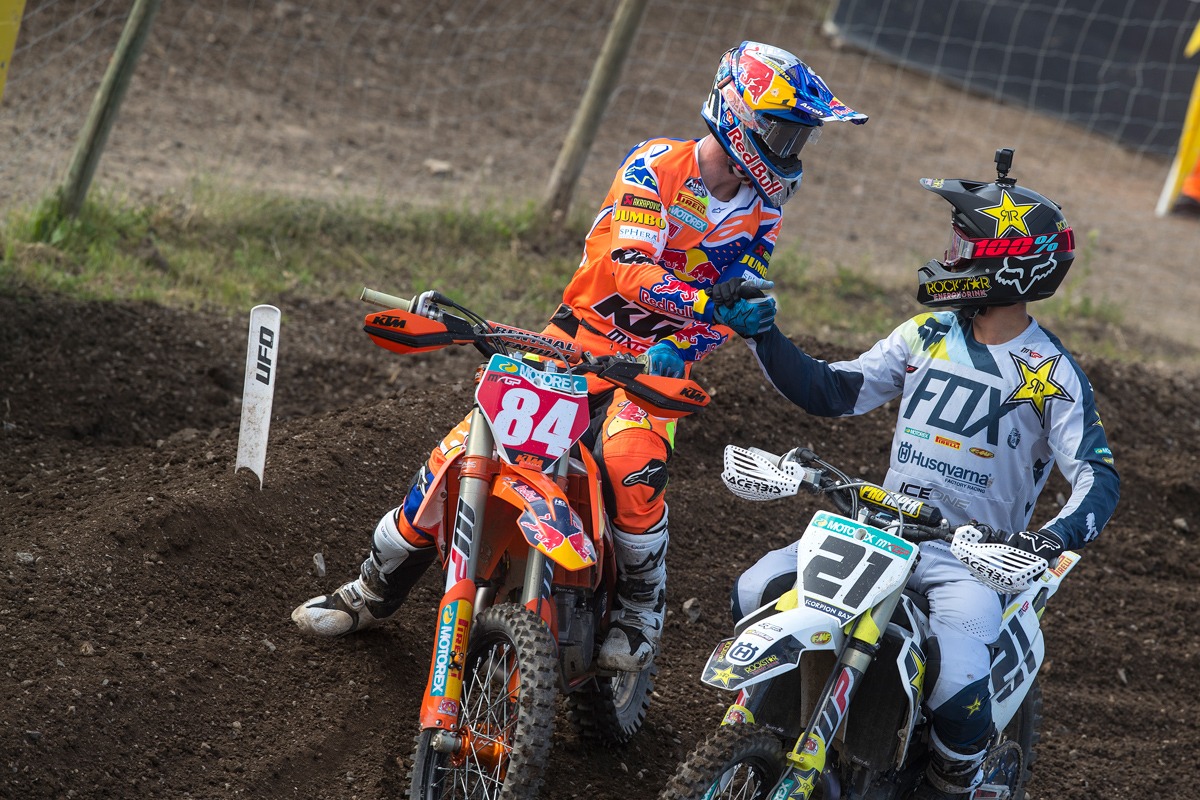 Herlings has his guard up but abhors the notion that the top level of motocross racing would have to stoop to such measures. “It is part of the game I would say but I hate it,” he said. “Tony cut me off at Redsand and in Agueda and I’ve never done anything to him in that kind of way. It is a little bit unfair. If you have the elbows up and in front you can basically do what you want. But if you race each other for 60 motos a year then you need to keep it fair and in the end the best guy who stays healthy will win. I’ve had some major injuries due to this sport and I don’t want to make it more dangerous that it already is.”

Toppling a more powerful competitor is an interesting situation and challenge for a professional racer. I imagine any tactic that works and somehow defeats Herlings – or any other insurmountable foe – on any given weekend must produce an amazing adrenaline rush. It’s possible that Herlings will not become only the second rider to win MX2 and MXGP crowns this year, and one of the best and most fascinating narrative arcs of 2018 will be how this could come to pass.