In the charming Tuscan region of central Italy lies the racing haven that is Mugello. It is nestled into a quaint valley which utilises the natural landscape to create swift stretches of tarmac and natural elevations across the circuit. It’s only early, but on our short journey to the site you can see hints of what the weekend has in store. Soon, the foundations of what will be a monumental amount of merchandise stands appear, farmers begin clearing fields for the arrival of thousands of motorbikes, tents are propped up as patches of grass are claimed for the next several days and cars are parked literally anywhere and everywhere from the sides of roads to 15 euro ‘garden’ lots. The fans go to the very ends of the earth to make this event a memorable one and pay attention to detail so beautifully. Small elements like an emerald green ‘Ape Car 50’ which Valentino Rossi previously raced around the streets of Tavullia perch on the side of the road as you turn off to enter the track. It is unsystematic madness but simply adds to its charm. 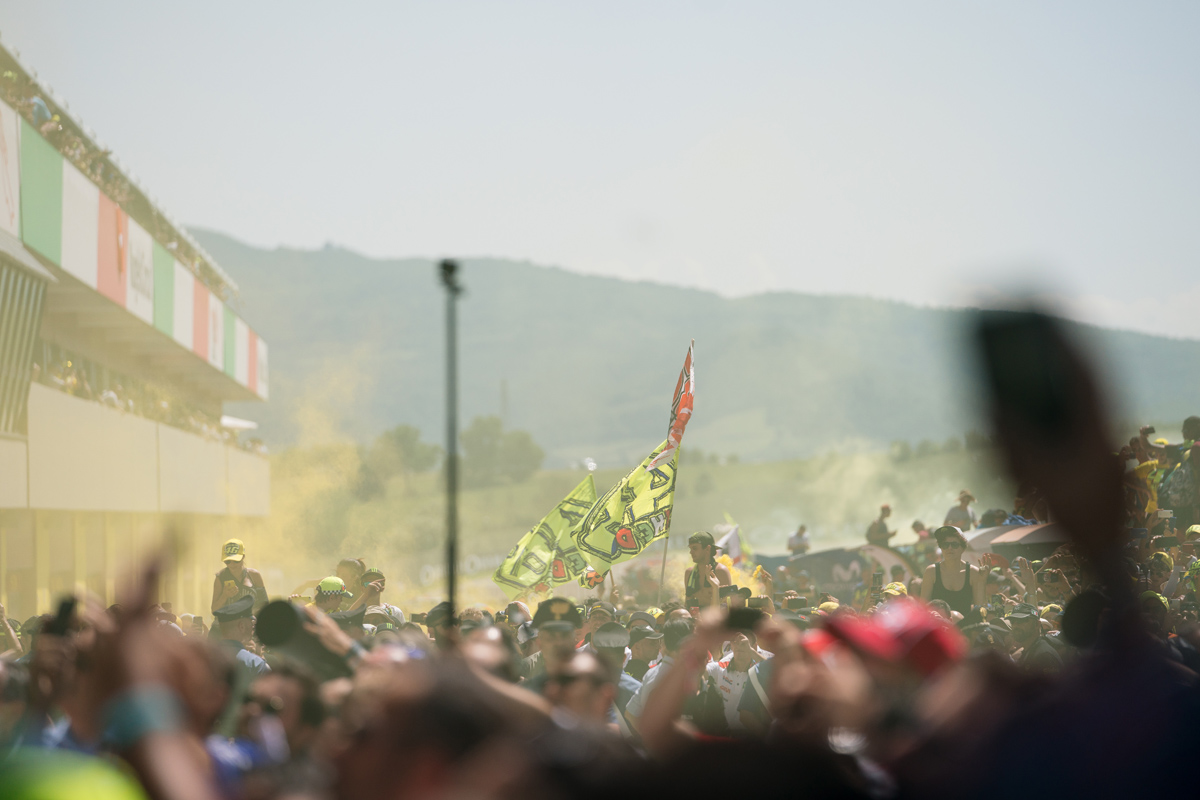 Mugello has evolved into a robust love affair between Rossi and his fans and the moment you step outside you can hear, see and feel the emotion. “The fans make me feel 10 years younger, it is a great feeling, a great emotion” Rossi said on Saturday evening. As I make my way onto the extremely busy service road I am constantly scanning the horizon. Tiny people scattered all around like rainbow skittles. The one variable standing strong among the sea of Ducati, Yamaha, Honda and Suzuki supporters is the #popologiallo domain (loosely translated to ‘Yellow Army’) of Rossi fans and the constant cloud of yellow smoke hovering around them. Soon, the smoke subsides and my brain is on overdrive. Deafening air horns, chainsaw engines incessantly roaring, topless bodies with scalded skin, endless beers and the scent of food stalls all concocted into one sensory overload. Welcome to Mugello. 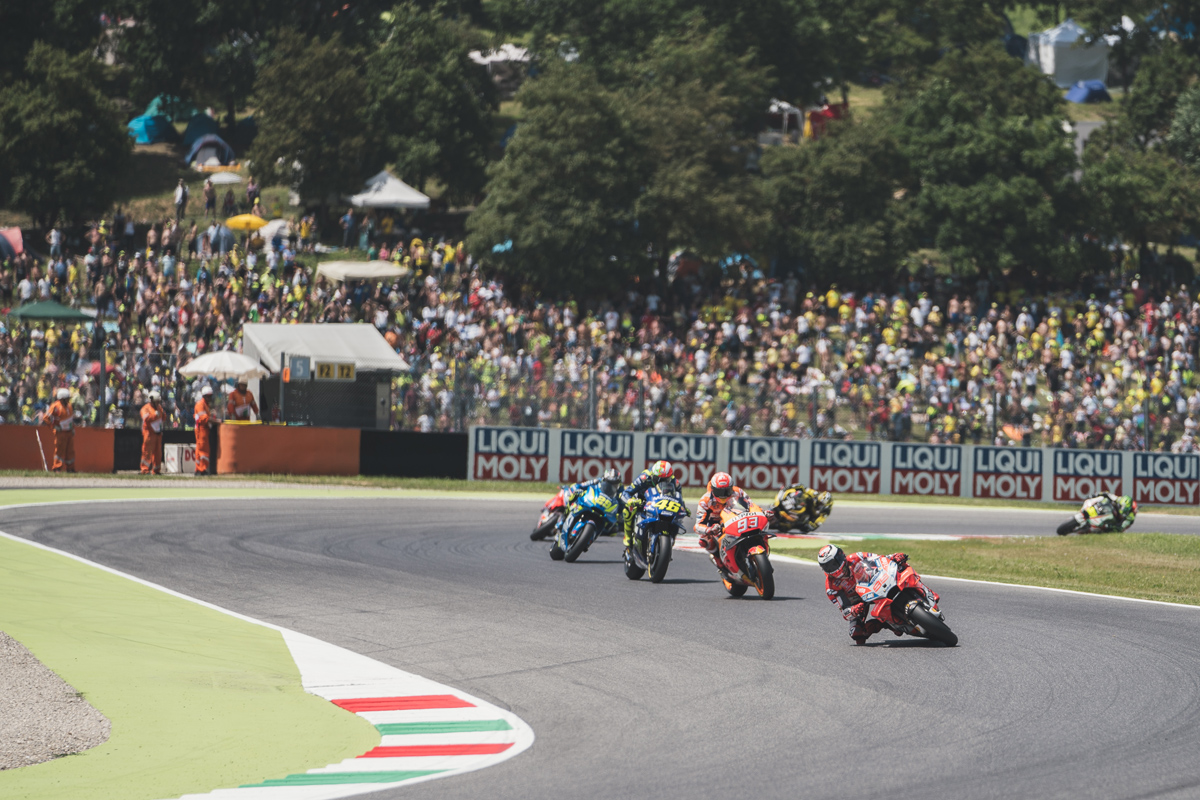 Voices constantly heckle towards you and are accompanied by flailing arms, signalling a wave of excitement and some even blowing kisses. They are charming and loud and exude every quality a crowd needs to create atmosphere at a Grand Prix. There is a famous saying adopted by the circuit “Al Mugello non si dorme” meaning “At Mugello you do not sleep”. Morning, noon and night the camping grounds are roaring with engines, music and voices. As usual, the Italians maintained their notorious reputation for relentless noise.

Last year over 164,418 spectators attended the Grand Prix. I can tell you that Sunday felt like every single person in Italy was standing there in excitement as Jorge Lorenzo, Andrea Dovizioso and Valentino Rossi took to the podium. Before you knew it clouds of yellow flooded the sky and you were completely submerged in smoke. The chanting began, it started off soft, crescendoed and then transformed into a symphony of voices echoing through the grandstands. It was like a grand celebration on crack. The pandemonium didn’t stop there, it continued to build until champagne coated those beneath the podium. Twenty minutes after the celebrations, I looked out the window and there were still hundreds of people rejoicing. The crowds were soon blessed with the return of Rossi and Dovizioso and like a pack of wild animals hunting for food, they began jumping and diving as Rossi tossed his knee sliders one by one towards them. I don’t think I have ever seen so many people admire a human being like they do Rossi nor a rider have such a strong connection with their fans. “The 10 minutes on the podium in front of the crowd repays you for all the effort you do during the year. The fans are just fantastic”. 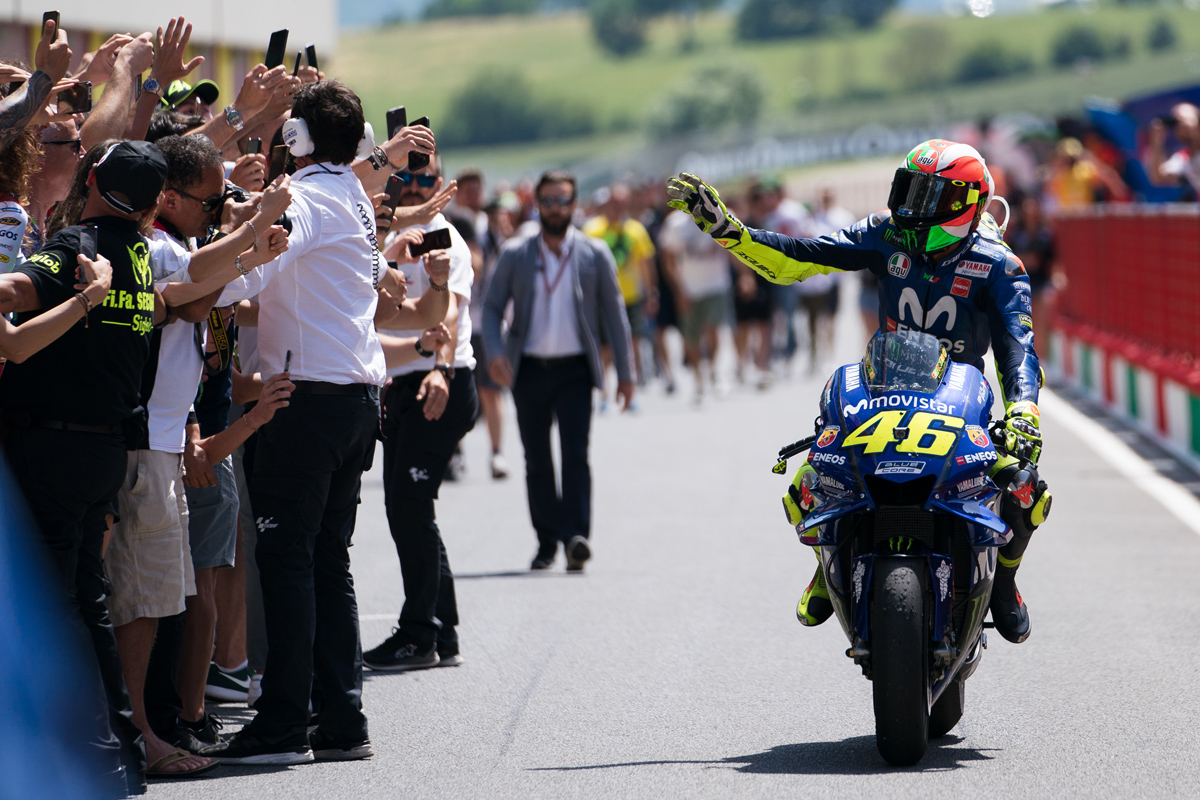 The tifosi make Mugello a truly unique experience. It is a ‘you have to see it to believe it’ moment and it generates an atmosphere that is electric. Over the course of the weekend, one thing became clear to me amongst the chaos. There is no doubt in my mind that fans play a pivotal role in keeping the sport alive and that the vast majority bear nothing but positive energy and support. Yet, occasionally we find ourselves feeling disappointment after hearing a tremor of inconsiderate spectators booing from their comfy grandstand seat or patch of grass. It is only a minority and I refrain from using the word ‘fan’ here as I do not believe true fans have any malicious intent but it is still unjust and whilst they go through a ‘grueling’ day of sipping on lukewarm beer with their sun kissed skin, riders are putting it all on the line not only for their careers but also for the show, the show they put on for us. We are all guilty of having a favourite rider, team or manufacturer but we are also human beings and nobody has the right to heckle another person who is innocently going about their business. So, in the spirit of a sport that brings so much diversity, continue to fly your flags and yell words of encouragement as your rider clocks his fastest lap and leave everyone else to support the rest of the grid. In the end, you’re there to enjoy your own day, so do just that. Mugello is the jewel in the crown of MotoGP and everybody should visit at least once in their life, preferably before Rossi retires. 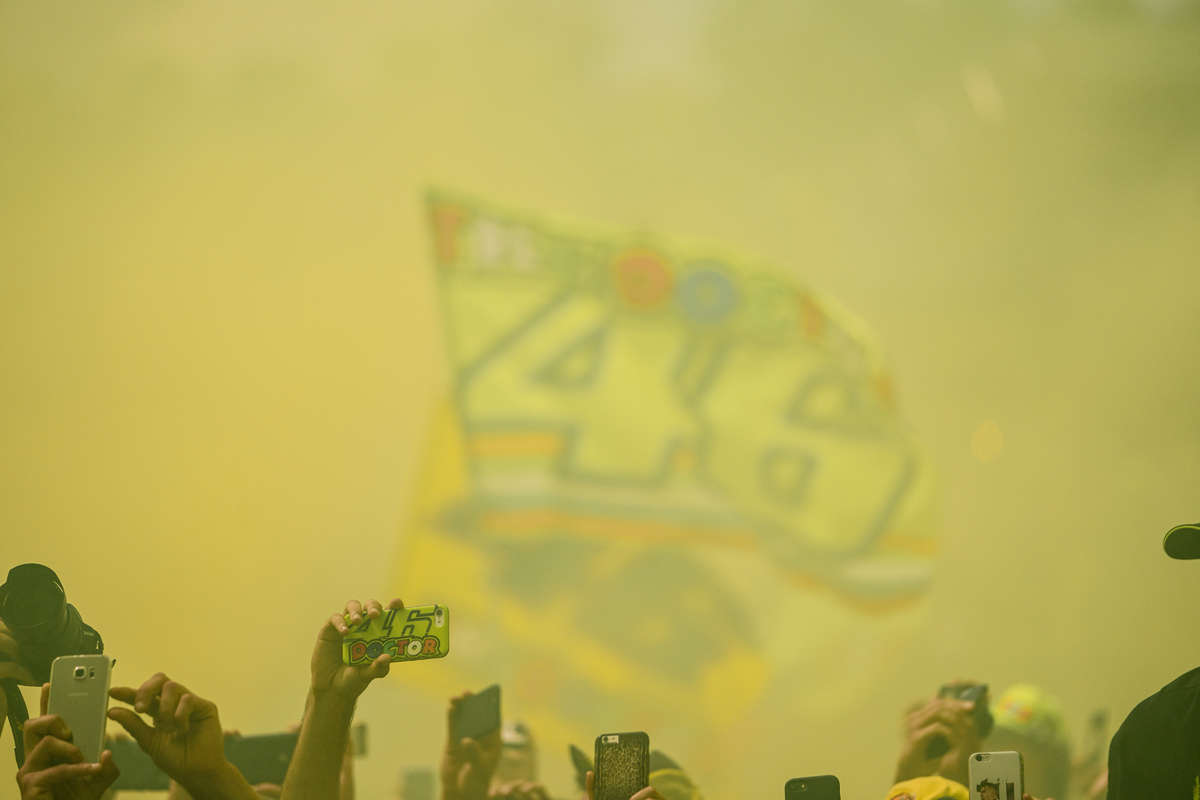