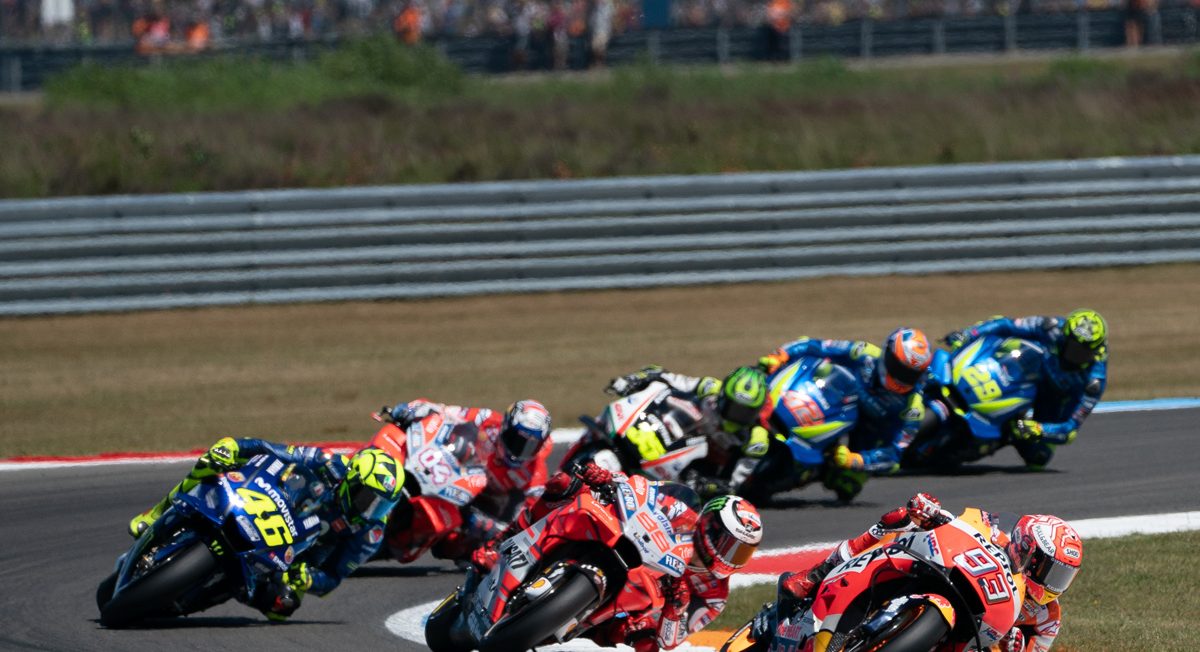 Skirting the edge of disaster

Assen: from the riders themselves
5th July 2018

There is a story French colleague Thomas Baujard tells of a scene soon after last year’s stirring Australian Grand Prix. The press conference had just come to an end, and, nerves still pulsing from observing one of the era’s great scraps around the calendar’s most hair-raising circuit, Thomas approached the podium party – Marc Marquez, Valentino Rossi, Maverick Viñales – to offer his congratulations for the show they had put on.

Of the three that were amiably cornered, it was the reaction of Rossi, runner-up that day and sporting streaks of black tyre marks across his leathers, that spoke loudest. This was not a man deflated to have lost out in an eight-rider fight. Not even was it one embittered to have watched main adversary Marquez ride away in the closing laps, those 25 points a crucial step toward gaining a fourth premier class crown.

Instead there was a rider still in the midst of that post-race euphoria: face sweaty, eyes wide, grin stretching from ear-to-ear. “If I woke up and saw a race like that…” Rossi beamed before imitating with a curled right hand the repetitive motion most associated with teenagers that find themselves home alone, basking in the vices that high-speed internet access offers.

Here was a rare slip of the mask of MotoGP’s eldest statesman. With the cute waves to the camera and well-timed quips that intend to charm nowhere to be seen, this exchange offered up a view of why Rossi still pursues a punishing round-the-world schedule that can’t get any easier as he edges ever closer to 40. Chasing race (and championship) wins is obviously the greatest stimulant that fuels his fire. But that adrenaline-infused thrill that comes with a no-holds-barred fight isn’t far behind. Rossi never made a secret of his love for the battle. And while the same cannot be said for Viñales, Andrea Dovizioso or Jorge Lorenzo – other names involved in Sunday’s astonishing Dutch Grand Prix – Marquez, his ultimate foe, has always relished such encounters.

The reasons behind this latest contender for an era-defining race– that’s three we’ve witnessed in little more than three months in case you lost count – are nearly too numerous to mention. But it’s hard to shake the feeling Marquez’s thirst for a frenetic fracas was as great a factor as any for Assen’s vintage eight-rider brawl that included 99 overtakes by one estimation, six different leaders, and was aptly surmised as “a group of wolves fighting against everybody” by the man who won it. 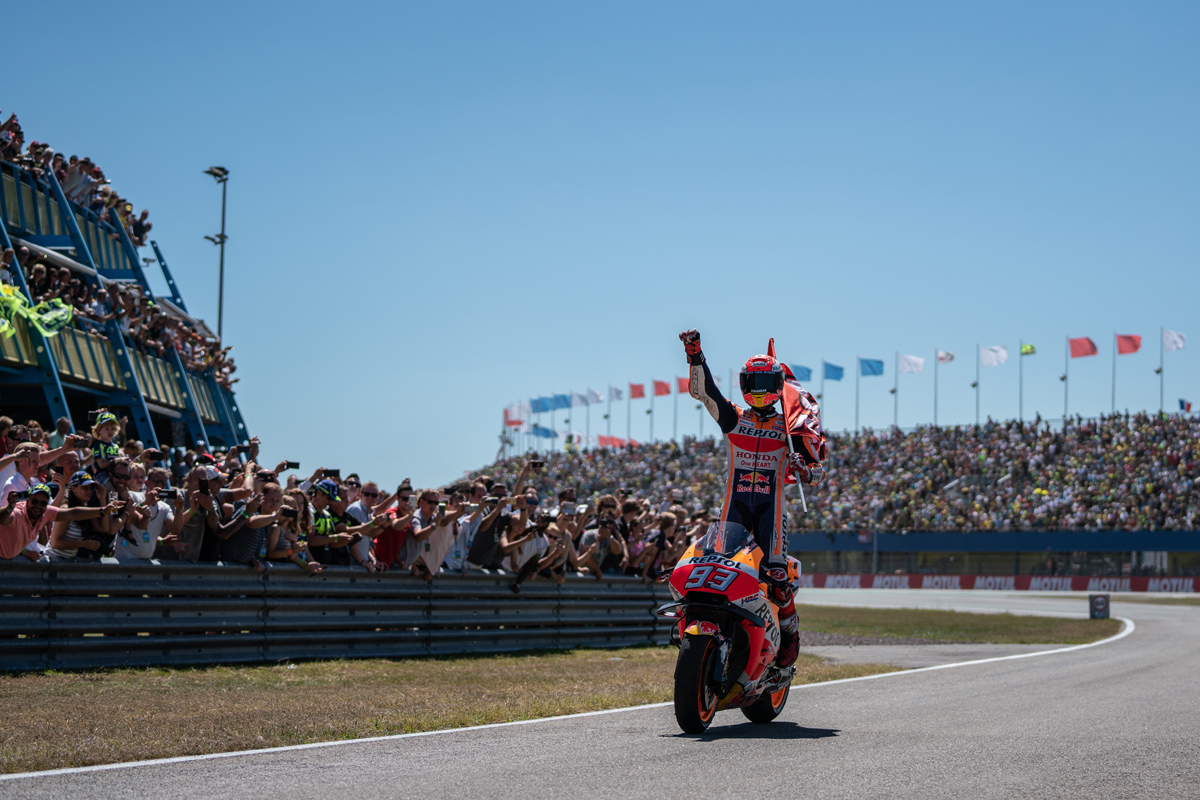 On Saturday Marquez was lapping the 2.8-mile TT Circuit Assen track in the low 1m 34s “with his eyes closed,” to use Cal Crutchlow’s words. In FP4 he was two, sometimes three, tenths faster than the rest per lap. His consistency in warm-up was unrivalled, drawing an exasperated shake of the head from Lorenzo, looking on from the Ducati garage. After a series of pulsating early exchanges with #99, Rossi and Andrea Dovizioso in the early laps of the race, Marquez knew this would be a waiting game. “[Lorenzo] overtook me immediately and then I was not able to keep the rhythm,” he later explained. “Then I said, ‘OK, we’ll wait. We were fighting a lot [but] in the end I was clever. I was just waiting.” In a showing that had echoes of Phillip Island eight month before, a perfectly timed final attack left his rivals staggering.

Not just clever. This was as brave as it was assured. Few others can contend with a barrage of assaults that border on the criminal with such an air of calm. But, like Rossi, Marquez gives you the impression the manner of his triumphs matter as much as the numbers he’s totting up (now only Rossi, Agostini, Doohan and Lorenzo have more premier class victories). To be remembered as a serial winner won’t suffice; to do it in his way, “Marquez-style” as he often says, leaves the greatest impression. And it’s always been thus. Eight of his 16 victories in Moto2 were won by less than a second, and it’s easy to forget that even during 2014, his most dominant year to date, only three of his 14 triumphs had a winning margin higher than 1.8s.

He attacks these occasions with particular glee. You sense Marquez was licking his lips when he found himself in a braking battle with Viñales at turn nine on lap 21 that ultimately pushed both men off track. And his response to a ruthless move by Alex Rins – enjoying what felt like his coming-of-age ride as a MotoGP rider – nine laps before that was deemed worthy of investigation by Race Direction and necessitated a Mamola-esque off-the-bike clamber was typical; return the favour three laps later. And do so with pleasure. This year’s Argentine Grand Prix aside, no one can ride with as much controlled aggression when the blows are coming as thick and fast as a World Heavyweight bout. 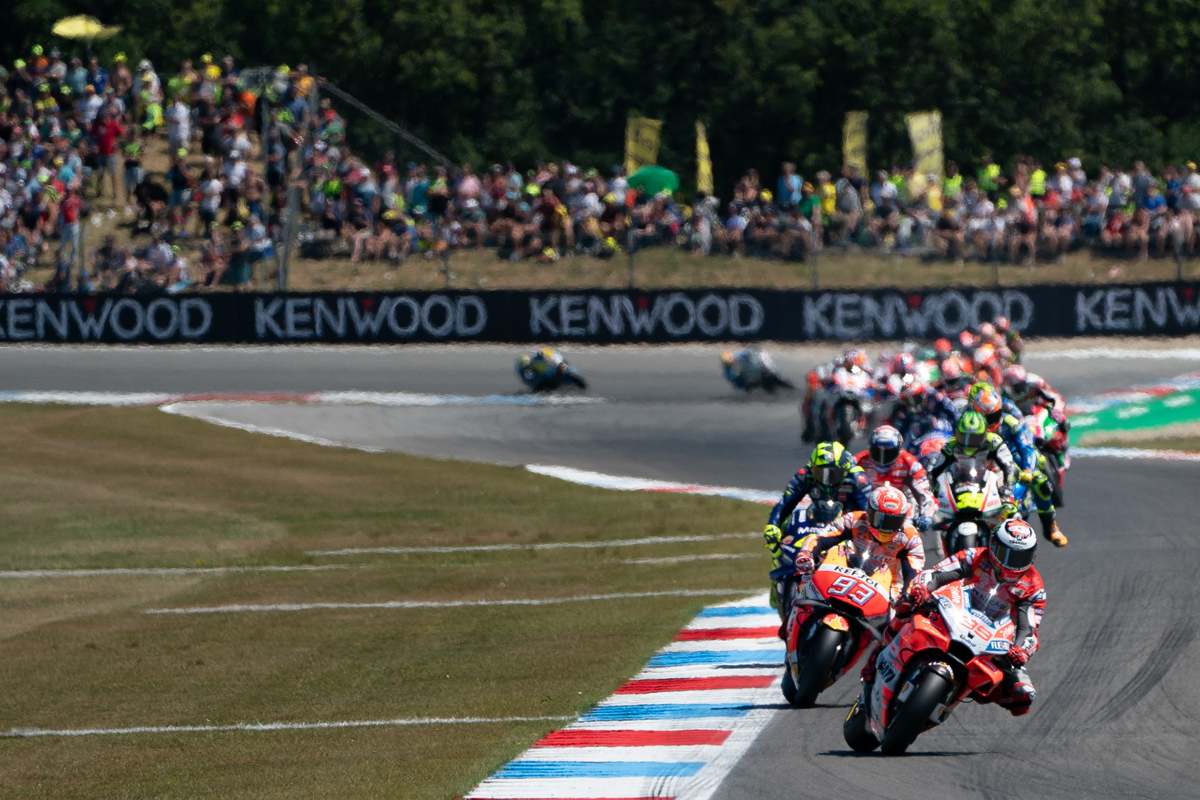 There were other factors at play here, of course: the wind had picked up on Saturday, and stayed for Sunday, making the high-speed, balls-out changes of direction through Ruskenhoek and Hoge Heide all the more difficult. “The top guys understood quickly that if you want to be in the 1m 33s you must risk your life,” reflected Johann Zarco, who could only look on from eighth. “We’re clever enough to say, “OK, I’ll stay in the 34s and see what happens.”

Fast and flowing, with only two low-speed curves, the layout of Assen, like Phillip Island, encourages close racing. And following here doesn’t equate to slow lap times. “It’s the point of reference,” opined Viñales when asked why the top six finished within 3.8 seconds. “When you have some riders in the front it’s easier to [be fast].” Crutchlow also observed, “in some corners I was hardly even braking whereas I would brake a lot if I was alone. Even when it’s chopping and changing, you’re able to still do not bad lap times.”

This was yet another example of the fruits of series organiser Dorna’s recent scheming, its insistence that all bikes run the same electronics hardware and software from the beginning of 2016. Now Ducati and Suzuki are roughly in-line with Honda and Yamaha, who carved up and shared each and every one of the 89 grand prix between 2011 and ’15. Sole tyre-supplier Michelin’s determination to bring three tyre compounds – front and rear – fit for racing use is another. On Sunday the soft rear was the tyre of choice for five of the leading nine men. Therefore the race had to be paced accordingly, with the final laps in mind. 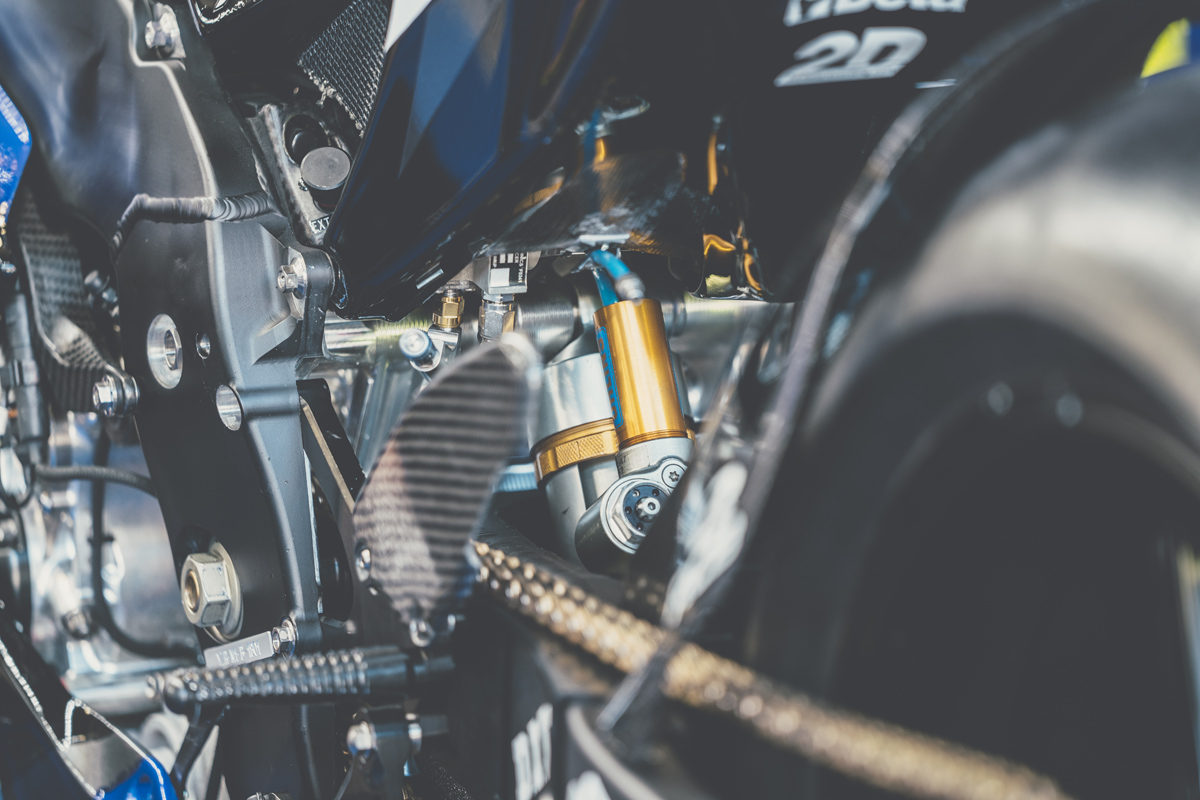 All of this resulted in a beleaguered Dani Pedrosa coming home 16 seconds and 14 places behind his team-mate, making this the closest top 15 in 70 years of 500cc/MotoGP racing (the previous record was 23s). That’s nine times the last point scorer has come home less than 35 seconds back of the leader in the last 26 outings. Before 2017, the top 15 were as close in just four occasions.

From this we can glean that in one of MotoGP’s most unpredictable eras, Marquez remains the only constant. On any given day ten riders have podium potential. But Honda’s main man is never far away. You have to go back to the Italian Grand Prix last June to find a dry race in which Marquez finished outside the top three. All of this sounds familiar. Wasn’t the situation akin to when Rossi was exercising a comparable kind of control over his peers that ultimately wore Sete Gibernau and Max Biaggi down and into grand prix irrelevance?

Earlier this year I had a conversation with someone clad in Repsol Honda apparel who has watched over both Rossi and Marquez during their stays in the squad. “What I see now with Marc is exactly like Valentino when he was here,” they said. “When he was Marc’s age, Rossi was the same.” Little wonder they share a mutual disdain.

So just as we recall those years from 2002 to ‘06, when a fabulously exotic bunch of 990s slipped and slid a merry dance to Rossi’s tune, the last five-and-a-half years will come to be remembered with similar fondness, as an era when premier class racing really was closer, more exciting than ever. And one man still stood above it all. Let’s thank our lucky stars, that like Rossi, he likes to get his hands dirty and leathers scuffed while he does it.