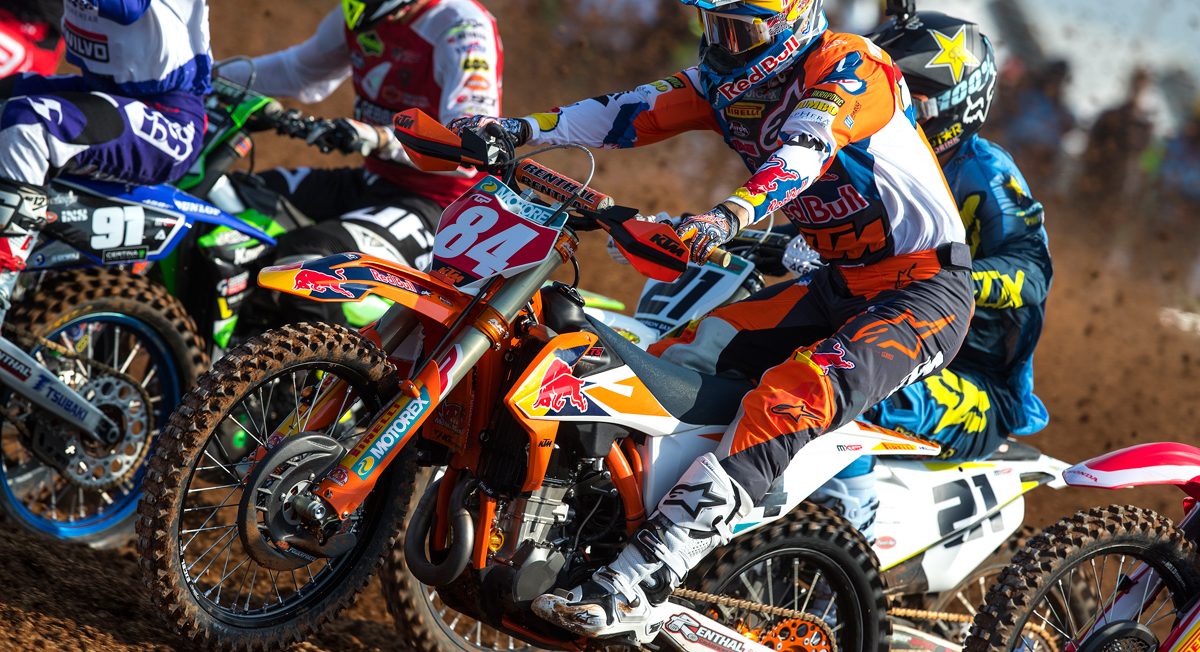 Red Bull KTM: it’s difficult to write about anything else. Jeffrey Herlings’ brilliance is a fortified as Tony Cairoli’s pedigree, and just when MXGP looked to be heading towards a sturdy narrative the emphasis swung one way and then quickly again with injury drama for both title candidates. It was a double-slap reminder that the sport is largely indiscriminate and utterly unpredictable.

Now that the original storyline seems to have been re-implemented (Herlings back on top) the big question with seven rounds of the twenty remaining is: is it over?

It might seem a stupid notion. Consider that Herlings broke his collarbone while in full flight and arguably never looking more invincible (and could never had expected to win both Indonesian grands prix returning just 17 days after surgery), and that Cairoli took maximum advantage of his teammate’s one-race absence to hack 50 points away from the cushion but then had to cope with a twisted knee and left thumb in the space of three weeks. Wow, what a sequence.

However Herlings has had his wobble. His grounding. And don’t expect him to take his superiority in this 2018 campaign for granted any time soon.

The Dutchman has broken a bone – but also records – every season since 2013. 2015 was the nadir with a collarbone snap, mangled little finger and the crushing hip dislocation in the space of two months. Add three more collarbone fractures (2013, 2016, 2018) and this part of his body is either very susceptible or heavily reinforced! For such an electric and relentless rider Herlings is not demanding of the 450SX-F (perhaps only in terms of the mileage he accumulates on the practice bikes, which KTM traditionally replicate to the factory spec machines) but he is not a frequent crasher. He might ride his luck quite often (and another racer, a certain #93 in MotoGP, comes to mind) but he is not reckless.

The biggest doubts for Jeffrey would have been his confidence, and the damage control that the trip to Indonesia should have meant. But he boarded the flight back from Jakarta in the extraordinary position of having replenished his esteem and form and having expanded his championship advantage once more. 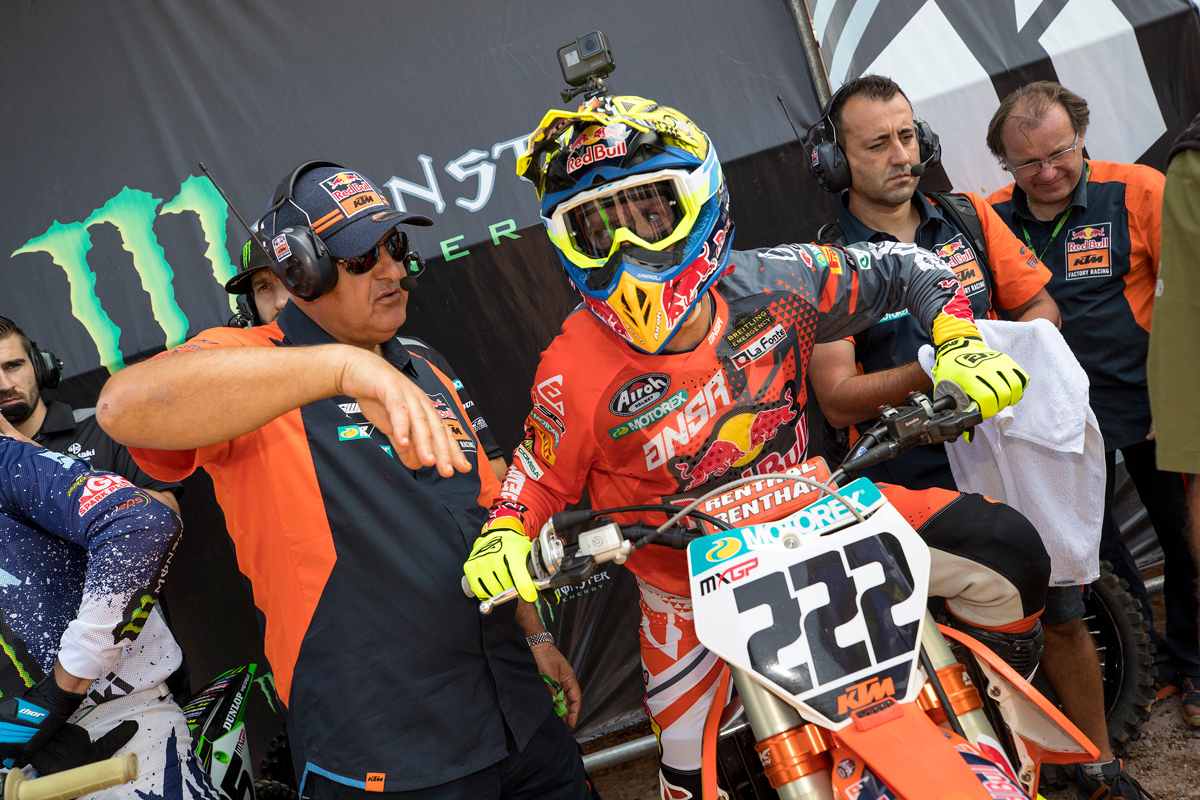 It is not as if Cairoli had an ‘open goal’ through the Asian trip and rounds twelve and thirteen, but the target was wide and the previously imposing keeper was partially hobbled. The situation quickly reversed after Pangkal Pinang and it was the world champion who was on the defensive, as he has been since the very first thrusts of 2018.

Herlings’ returning ‘double’ was again another symbolic moment in this title duel. He relegated Cairoli with relish in Argentina, Italy, Holland and Latvia and dealt with the Sicilian’s insurgence at the first possible moment in Pangkal Pinang. On paper and in terms of psychology and momentum then it is hard to see Tony getting another chance to re-orientate the odds in his favour.

From the very start of the season it has been tricky for many members of the MXGP press circle to recall a time when Cairoli faced such opposition. Pourcel, Rattray, Searle, Desalle are some of the names to have pushed #222 to a few new limits since 2004 but there has rarely been a sustained threat. For all his experience and capabilities, this current campaign represents unchartered waters for Tony. He is in the unusual predicament of needing to seize every single point and opportunity (especially with just seven rounds left to run) to aim for that red plate. Very soon the dispute will reach a stage where he’ll require Herlings to start dropping the ball or for other peers – Tim Gajser and Clement Desalle the most likely – to interfere more regularly at the top of the moto classifications. He’ll need help. It will be slipping slowly out of his control. 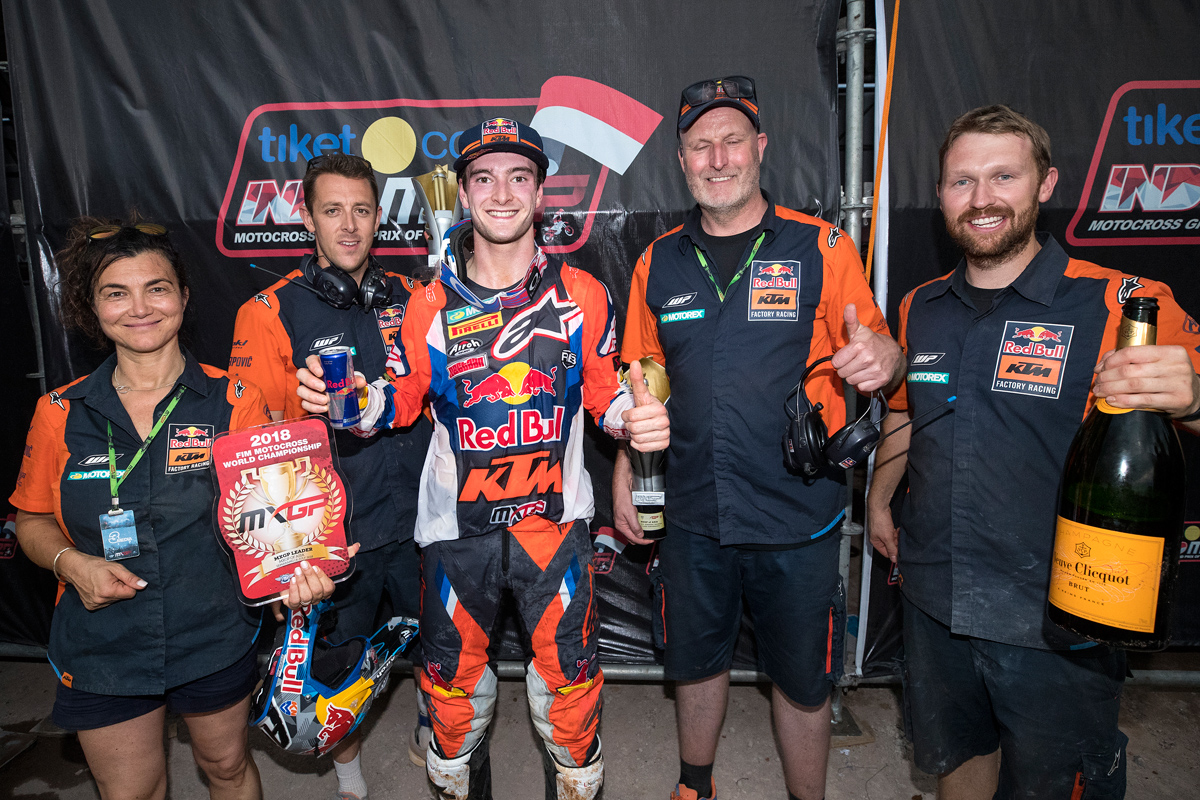 Right now this weekend’s Grand Prix of Czech Republic will be a key event after the Asian affair. The first matter of contention will be Cairoli’s fitness and whether his hand and knee have recovered sufficiently to allow him to operate at will. The other issue is the Loket circuit itself. The compact, stony hard-pack is not a favoured venue for both MXGP front-runners. Cairoli has won three times there since 2010. Herlings has tasted world championship success (2013) but also has the scars of a dislocated shoulder (an injury that prematurely ended his debut season in 2010) and the ghastly hip debacle. Due to incident, accidents and absences, Herlings has not trodden the Loket podium since ‘13; making the Czech soil his sparsest territory in MXGP.

Is the MXGP battle a done deal? 24 points between the pair and Cairoli’s undeniable strength means it’s tempting to say ‘you’re having a laugh’ but Herlings has the baton again. Victory at Loket and some preservation in the coming weeks by the championship leader will make, what some claim, an inevitable outcome seem all the more likely.