Let’s take a wheelbarrow and off-load some random thoughts about random things over here yeah?

-I’ve been told by a few people I trust that Team USA for the upcoming MXDN has been picked and it’s going to be Eli Tomac of the Monster Kawasaki team riding MXGP, Justin Barcia of the Monster Yamaha team in MX Open and Monster Star Yamaha’s Aaron Plessinger in the MX2 class. I haven’t been able to absolutely confirm this by deadline time but I feel comfortable enough to put this out there. After all, it’s not rocket science right? Plessinger has more than a moto lead in 250MX class here and went 1-1 at Redbud which is where the race will be held in case you just emerged from the rock you’ve been living under.

Tomac is of course the fastest rider the USA has right now so of course he’s going and Barcia has rebuilt himself this year and is the only question mark for the red, white and blue. Team manager Roger DeCoster could’ve waited for Rockstar Husqvarna’s Jason Anderson to come back but that’s a little late for team selection time. Blake Baggett of the RM ATV/MC KTM team would be worthy but hasn’t been as good as Barcia so step right up Justin! 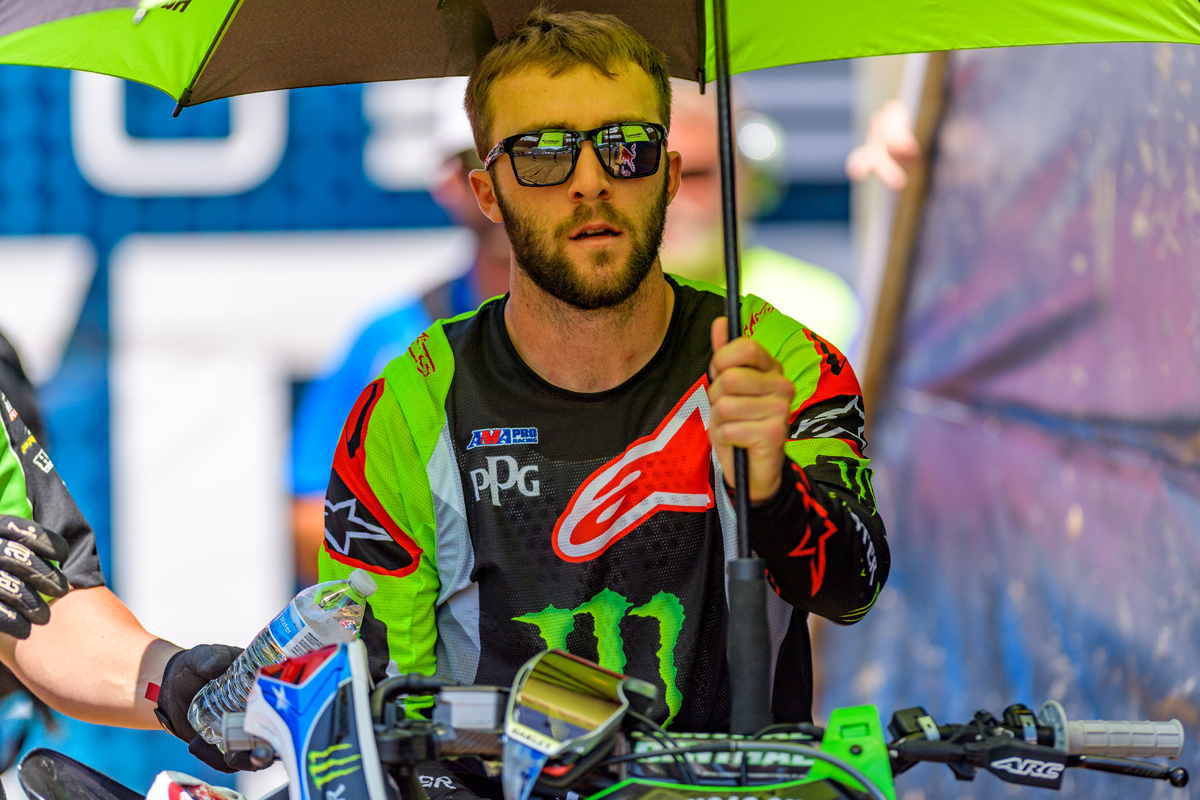 -Generally by this time of year, the next year’s silly season is in full bloom and riders and agents are plotting where they’ll be riding the next year. But this year it’s rather quiet with all the heavy hitters here (Tomac, Ken Roczen, Marvin Musquin, Jason Anderson) all under multi-year deals and will be staying put. Honda’s Cole Seely is up but it seems like he’s going to stay red. Zach Osborne is going to move up alongside Anderson, Monster Kawasaki is going to move up Joey Savatgy to replace Josh Grant, JGR Suzuki’s going with Weston Peick and Justin Hill, Red Bull KTM’s got a spot alongside Musquin and it looks more and more like Cooper Webb will move from Yamaha over there while Barcia will re-up with Yamaha and need a teammate, which seems like it will be Dean Wilson. Or perhaps Dean Ferris if my people down under are correct. Baggett’s got a spot open alongside him but I’d think Benny Bloss’s recent rides and low salary demands put him returning there. 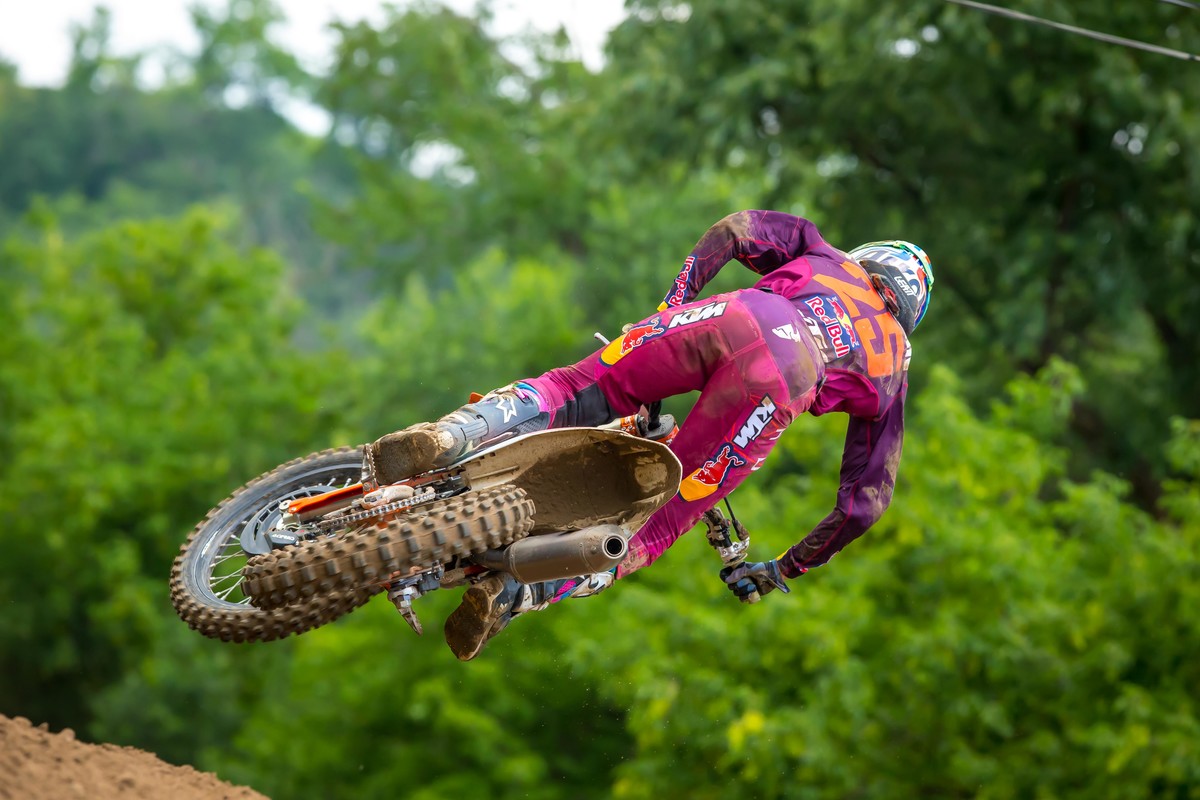 And in the 250 class it’s going to pretty much the same thing. Hunter Lawrence was at Redbud and getting ready to join GEICO Honda who will exchange Cameron Macadoo for Lawrence. Mitch Payton’s Pro Circuit squad will most likely re-sign Martin Davalos and come back with the same team, minus Savatgy. TLD KTM will add Mitchell Faulk and lose Alex Martin to JGR Suzuki (who have one, maybe two spots open). Rockstar Husky keeps Mitchell Bailey, adds Thomas Covington and has one spot open and Star Yamaha has its same roster of riders. So all the main factory teams seem to be about set in both classes.

The only thing that could change, if one agent I spoke to is correct, is that Barcia is unable to come to terms with Yamaha on the right amount of money and jumps back to Honda. All the previous issues with the bike and management for Barcia are gone and in fact, he gets along with Erik Kehoe, who’s back with Honda now, very well. So that would leave Yamaha with two spots. Maybe Seely jumps there with Wilson and/or Ferris.

Stay tuned for updates, once Webb declares his interest and where he’s going things should be a bit clearer but for now, all the above are my best, educated guesses from what I hear. This leaves riders like Justin Bogle, Malcolm Stewart, Josh Grant all on the outside looking in.

-I don’t know, maybe it’s all just a coincidence but the 2019 Monster Energy Supercross schedule that’s traditionally been released by the final race has been pushed back, by my count, two different times now. Not sure what the deal is on that, maybe it’s something as simple as not all the T’s being crossed with the venues but my spidey senses are tingling.

The sport of supercross has reached a point where they’re actually getting paid to put it on TV now so that’s a good thing. And word is the TV deal with Fox/Fox Sports 1 is up and the folks at Feld Entertainment are shopping the sport to some different networks. The fact there’s interest from others is also a good thing. I had heard that NBC/NBC Sports was interested as well as the Fox folks. Maybe the schedule delay is based on Feld wanting to go into markets that the new/old TV people are interested in? Not sure how much that matters, maybe not at all, but the talent for the TV show seems to be in a bit of a holding pattern right now as whomever wins the right to broadcast supercross gets some say in the talent. So one might think the schedule is also being held up a tad?

Fox Sports lost Mixed Martial Arts programming to ESPN so they certainly have some budget and time on their network freed up. NBC is shut out of most sports the time the races are happening so it makes sense as well. Either way, the sports come a long way from having to pay to be on TV and being tape delayed so this is a good thing for sure. Now give us the damn schedule!