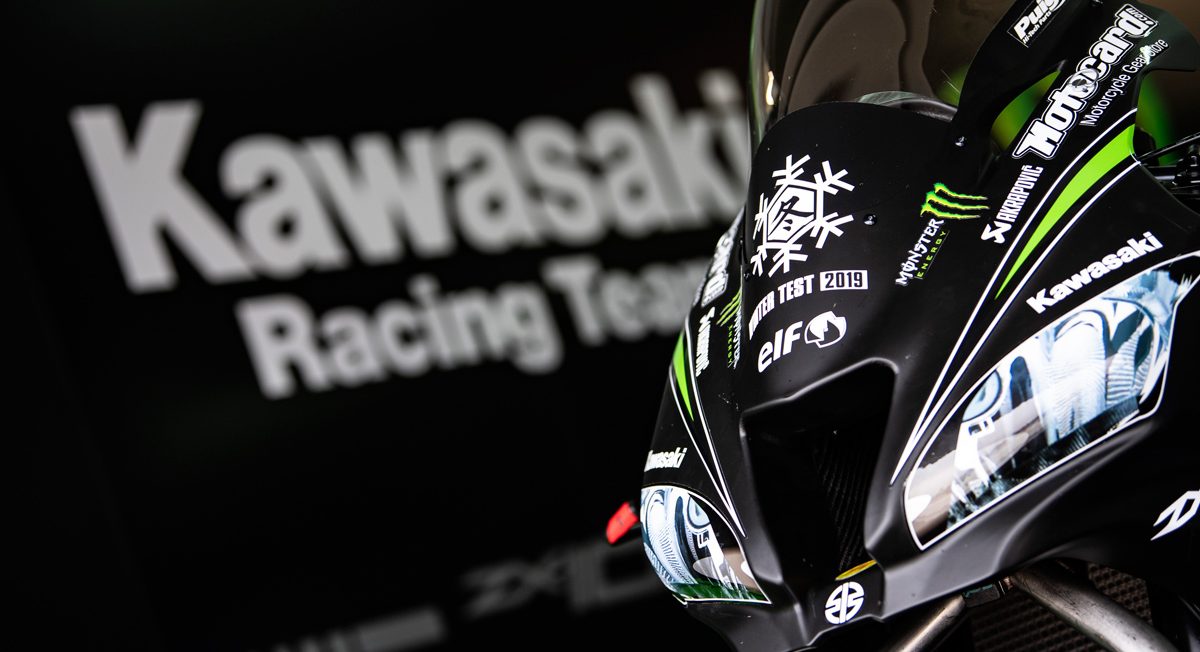 I arrived in Aragon for the first WorldSBK winter test full of enthusiasm. I like the track at Motorland and it was the first time we were going to see Chaz Davies on the new Ducati Panigale V4 R, winglets and all.

There had been a lot of WorldSBK news at the EICMA show; Tom Sykes confirmed at BMW; the bombshell that Ten Kate will no longer be the Honda team and that HRC will fully back the programme in 2019; GRT Racing will step up to be a Superbike team with Yamaha, but the thing that I thought was most interesting were those wings on the Ducati.

In all the press material and previous test shots, we saw what was more or less a standard Panigale V4 in terms of design. At EICMA the covers came off the ‘R’, the racing version, that will be used in the WorldSBK Championship and it was the first time that, I at least, had seen the profile. For me it was a more significant development than the amount of press attention it received. It showed that we have now entered something of an arms race between Kawasaki and Ducati; one to retain supremacy, the other to topple the green machine from its pedestal.

Both manufacturers have used the homologation rules to their advantage and introduced small run production machines that are solely designed to go racing. Kawasaki have worked on the engine characteristics with their Ninja ZX-10RR, clawing back some of the RPM and power they lost last year under the WorldSBK technical regulations, and Ducati kept their secret weapon under wraps till the very last minute.

I love it. I am a sucker for all the trick bits that go into racing machines but is this really what WorldSBK needs? For sure the other manufacturers are not going to invest the amount of money that Kawasaki and Ducati have to bring homologation specials to the grid and that immediately puts them at a disadvantage.

Is it time then to change the homologation rules in WorldSBK? The number of production machines required to homologate a race bike has repeatedly been reduced over the years to attract new manufacturers on to the grid. Foggy Petronas, Bimota, Buell all benefitted from it, but where are they now? If you look at Honda, the current Fireblade follows a basic design that is more than 10 years old. Maybe things will change now that HRC are involved again.

Dorna and the FIM are continually introducing changes to the technical regulations in WorldSBK (which Kawasaki feel are now only designed to stop them winning) but the homologation rules mean that each year they can make a change to the engine or the chassis, produce 500 for the market, call it an R, RR, SE and go racing, and keep winning. Maybe a more radical solution is needed, raising the number of production units required to homologate a race machine.

That in itself will bring it’s own problems. Manufacturers are selling less and less sports bikes and the new model cycle is stretching out from what was previously around two years, to five and six. If a bike is homologated for racing and it proves to be below par, the timescale for change is then too long to make a difference. It’s a difficult conundrum but I think one that needs to be discussed between Dorna, the FIM and all manufacturers and I would actually like to think that it already has.

As I said, I love it however. As really young kid growing up I was obsessed by car rallying (my old boy had a friend with a garage that sponsored a team) and I was fixated by all the extra bits that went on a rally car; big lamps, roof vents; buckets seats. It had such an exotic feel to it. Then when they started introducing carbon fibre, well……. 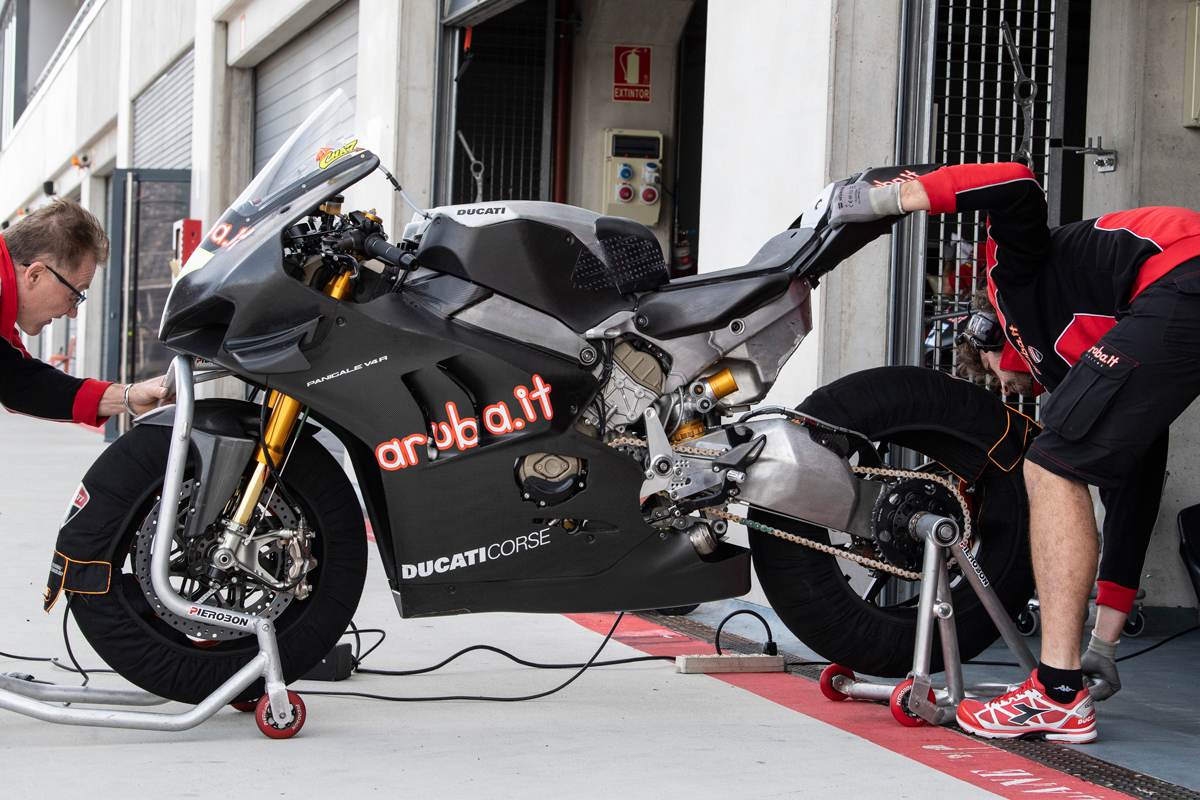 The little boy in me is still there and I found myself standing in the pit lane just staring at the new Ducati. There was so much to look at it was like being a kid again and being unable to take it all in. I then pulled my camera off my shoulder and there was a mass panic and the garage door slammed shut. There are obviously some real trick bits that are not for general viewing at the moment. Out on track it looks and sounds awesome. Just as a race bike should.

Davies pronounced himself happy with his initial feelings with the bike. His biggest issue was adapting to the different power characteristics of the four cylinder engine after so many years racing the V-twin. He said that he felt so comfortable on the bike, however, that he was having to hold himself back from pushing hard. The plan for the test was to get lots of consistent laps on the board and get lots of data and a good feeling. The racer in him wanted to wring its neck and answer the question: “how fast does it go mister?” I can’t wait till Jerez to see if he gets the chance to give it the berries.

Jonathan Rea was also adapting to the 2019 version of the Ninja ZX-10RR. Kawasaki have changed a number things in the engine internals of the production bike and it has altered the characteristics of the race machine quite a bit.

I spoke to both Jonathan and Pere Riba on Thursday morning when rain had stopped play and they both had the same feeling with the new bike. It was like a new partner that you had to get to know, to understand them and work on being comfortable in the relationship.

The 2019 Kawasaki had proved to be a difficult first date for Jonathan. He was able to post a fast lap time, and he can see the potential, but there is a lot of work to do until he can put his feet up on the sofa without getting moaned at.

His new teammate Leon Haslam was wrestling with a really feisty character on his first meeting with his new partner. Coming from the BSB championship that has a control ECU, Leon had to get used to the full factory Magneti Marelli system of the KRT Ninja. He wasn’t far off the pace but admitted that he was on a very steep learning curve. He was refreshingly candid in an interview, saying that is aware that the ‘package’ is a proven winner and everything else is down to him.

The guys on this test that slipped under the radar were Alex Lowes and Michael VD Mark. There was nothing overtly new on show and the pair went about their business in a very purposeful and professional manner.

I met Alex on the plane on the way home and he was relatively happy with what they had done on the first day but, like everyone else, was frustrated with not turning a wheel due to the rain on day two.

This time next week we will all reconvene in Jerez in Andalucia and I think we will see more progress from everyone, out on their second dates. Alvaro Bautista will join them. There is much speculation as to how he will get on with the Superbike but I get the feeling that the new Panigale will be very similar in it’s riding characteristics to the MotoGP bike that Bautista has been racing this year. His performance on the factory machine, standing in for Jorge Lorenzo, showed his credentials and I expect him to be on the pace straight out of the box.

The unknowns we have at this stage come from Honda, BMW and Ten Kate.

The new Honda team formed by Moriwaki and Althea Racing will be based in the Czech Republic and at this stage they don’t realistically expect to be on track until January. BMW on the other hand are teaming up with Shaun Muir Racing, Tom Sykes and Markus Reiterberger will ride the new S1000RR and hope to make one private test before the end of the year.

The final question mark is over the Dutch, Ten Kate Racing squad. Having been ruled out of any plans with Honda they are pressing hard to find a solution to keep them on the grid in 2019. There was a rumour circulating during the test that they were about to sign a deal with Suzuki. However, at Valencia at the weekend the Suzuki staff denied any involvement. Having worked with the team for a long number of years I really hope they find a solution. They have stayed loyal to the Superbike World Championship for many years, through some lean times, and it would be a travesty if we arrived in Phillip Island next February without them.