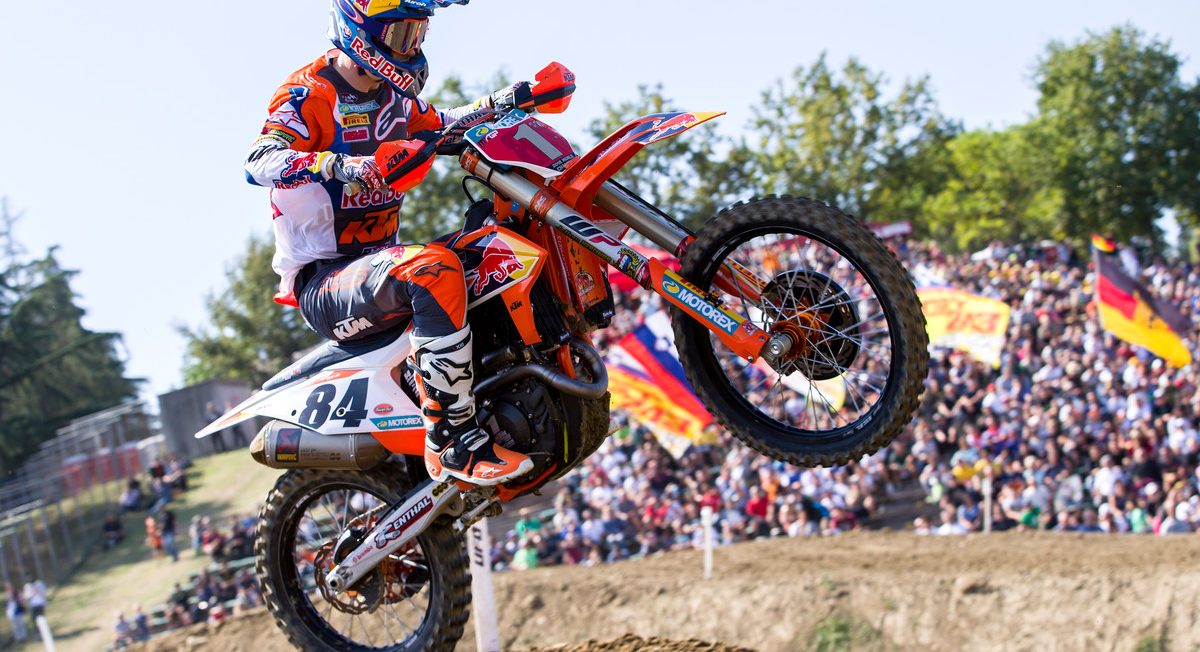 Total domination of both classes in the 2018 FIM Motocross World Championship has not slowed the rate of work and focus for defending champions Red Bull KTM. The team owned both MXGP and MX2 classes for the sixth time this decade but have ploughed on regardless with improvements to their SX-F 450s and 250s.

MX2 Team Manager and Technical Co-ordinator Dirk Gruebel admitted that large strides for the bikes (that were already new models for 2018) were unlikely but, as an engineer, stressed that the search for upgrades is never-ending. For race fans it is hard to understand how the machinery that decimated the MXGP holeshots charts, claimed both FIM titles and provided the base for two from three 2018 AMA Supercross championships can be bettered.

“Just some ideas, to try some things,” Gruebel commented. “We cannot make huge steps every year but there are little things like stiffness of the frame and other tweaks that we can offer to try and get the riders even more comfortable. We cannot sleep…that’s our job!”

Jeffrey Herlings is testing chassis modifications last week on his 450 SX-F: a motorcycle he described as the “perfect bike” in 2018. The Dutchman only recently returned to riding and training after a lengthy break in the wake of the Motocross of Nations and due to the exertions of winning 17 from 19 MXGP Grands Prix and forging a 100% podium record. For the team it was an unusual period of inactivity with an athlete that has been part of their stable since 2010 and has already delivered four crowns. “It is the first time that Jeffrey took such a big break; the last two years we could hardly get him off the bike,” says Gruebel of the recently turned 24 year old. “We didn’t want to stand in his way. He had to fully recover from this year to get hungry again. It was a good thing.”

Meanwhile Tony Cairoli has already set his sights on a stronger title tilt in 2019. “Tony is pretty much done,” says Gruebel of the work for next season. “He kept riding these weeks. We did a little bit [of development] on chassis but not much and he swapped to the new engine that Jeffrey used this past season.”

Gruebel has admitted that MX2 World Champion Jorge Prado is leading the direction of the 2019 KTM 250 SX-F and the Spaniard has yet to test and try a new engine for his racebike. Rookie Tom Vialle has a different set of parameters. “With the 250 we still have a bit on the plate and the riders are waiting,” he said. “With Tom it is too early to throw too much at him with the new bike. It is super-strong and we want him to get comfortable first. We’ll have a different engine for Jorge to try.”

Red Bull KTM are expected to split their winter work between the customary stay in Sardinia and with Herlings planning to train and ride in eastern Spain. The world champion will not contest the three round Italian Championship and will instead enter pre-season events in the UK (Hawkstone Park), France (LaCapelle Marival) and possibly Italy (Mantova Starcross).