Round two of the Monster Energy Supercross Series provided more excitement for the fans of the series: much like Anaheim 1 there was a different, unexpected winner and more questions were raised. Unlike last year when we had two title contenders DNF a main event, 2019 is shaping up to be pretty unique.

Now, having said that, watch the big four (Jason Anderson, Marvin Musquin, Ken Roczen and Eli Tomac) just start ripping off all the wins and being the better riders! Forget everything else I wrote above.

RMATV/MC KTM’s Blake Baggett rode a superb race to win his first career 450SX race, and combine it with Justin Barcia’s win last week and hey, who had Baggett and Barcia as winners of the first two rounds? Parity is cool right?

Baggett is certainly a much improved rider indoors the last few years. We know how good he is indoors but even on the smaller bike, Blake never got the wins that one would think he should’ve. Outdoors though, he’s an animal. 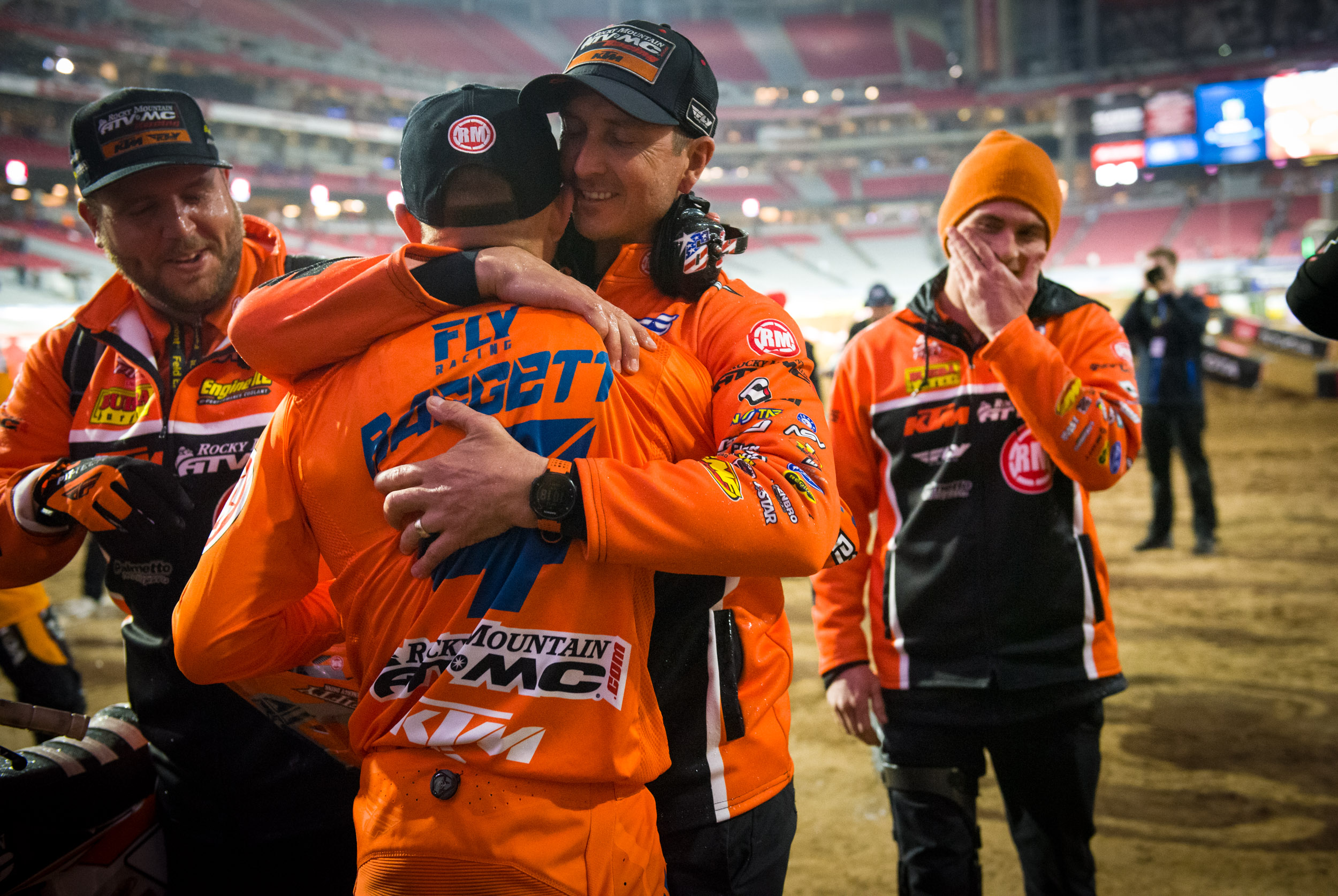 A lot of the credit can be accredited to team manager Michael Byrne. The Aussie, who had a very good career himself over the years, is an analytical sort who understands what the bike is doing and is big on body positioning.

He’s worked with Mike Alessi before, he’s been by Chad Reed’s side for a long time and rode for the team he manages now for a couple of years. Baggett has always been a guy that rides a ton, works hard off the bike and is very determined. He just needed technique and Byrne has provided that. Cool to see and it’ll be great if BB4 can step up and run with the big dogs each week.

Some other stuff that caught my eye. 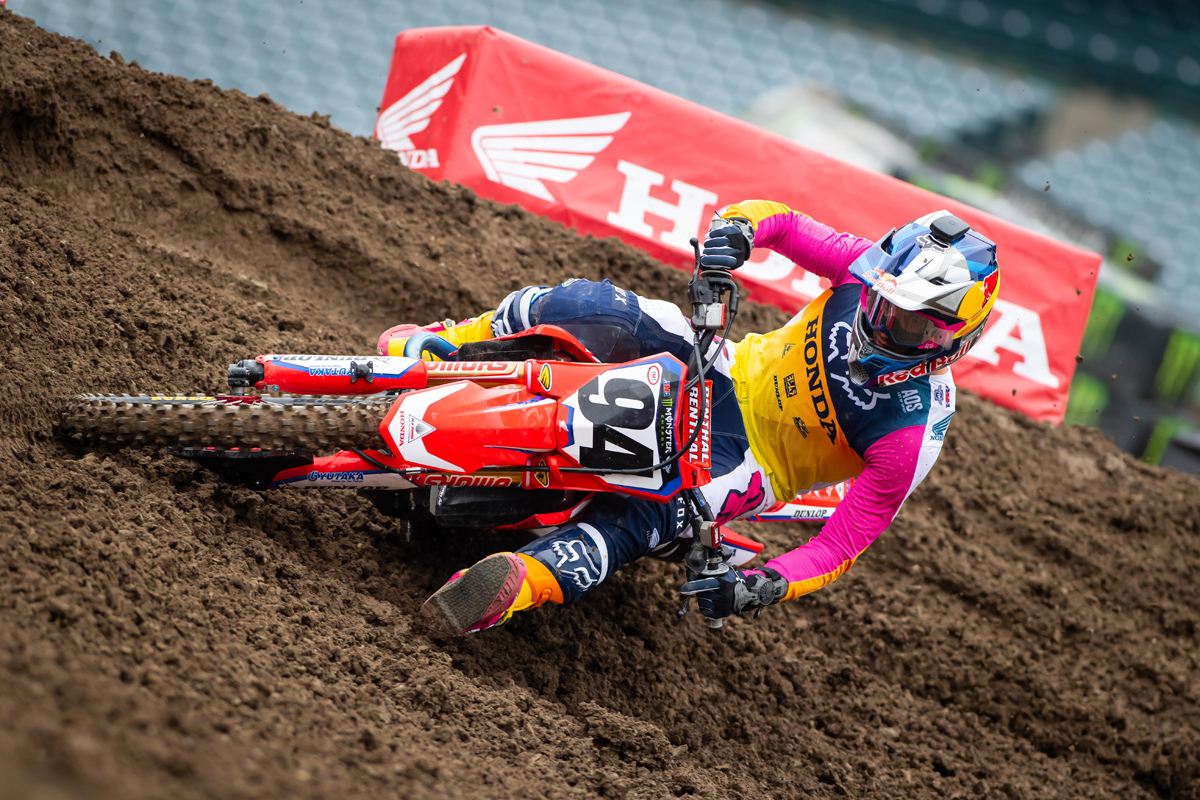 -The red plate holder after two weeks? That would be Ken Roczen who hasn’t won yet but has gone 2-3 in the first two rounds. Roczen grabbed the holeshot from the outside in Glendale and led early on. He was stretching it out a bit when a red flag was waved because Malcolm Stewart went down, all that work went down the drain. A staggered start was next and Roczen had Jason Anderson on him and eventually succumbed to the pressure from the defending champion. Would Roczen have won his first SX in almost two years if the red flag hadn’t come out? I think so, he looked in control. One has to think that the ten-minute break before the re-start changed things up a bit right? And of course, the loss of the lead.

Still, it’s cool to see Roczen with the red plate and a win is coming real soon. Probably not soon enough for Ken and Honda but soon. 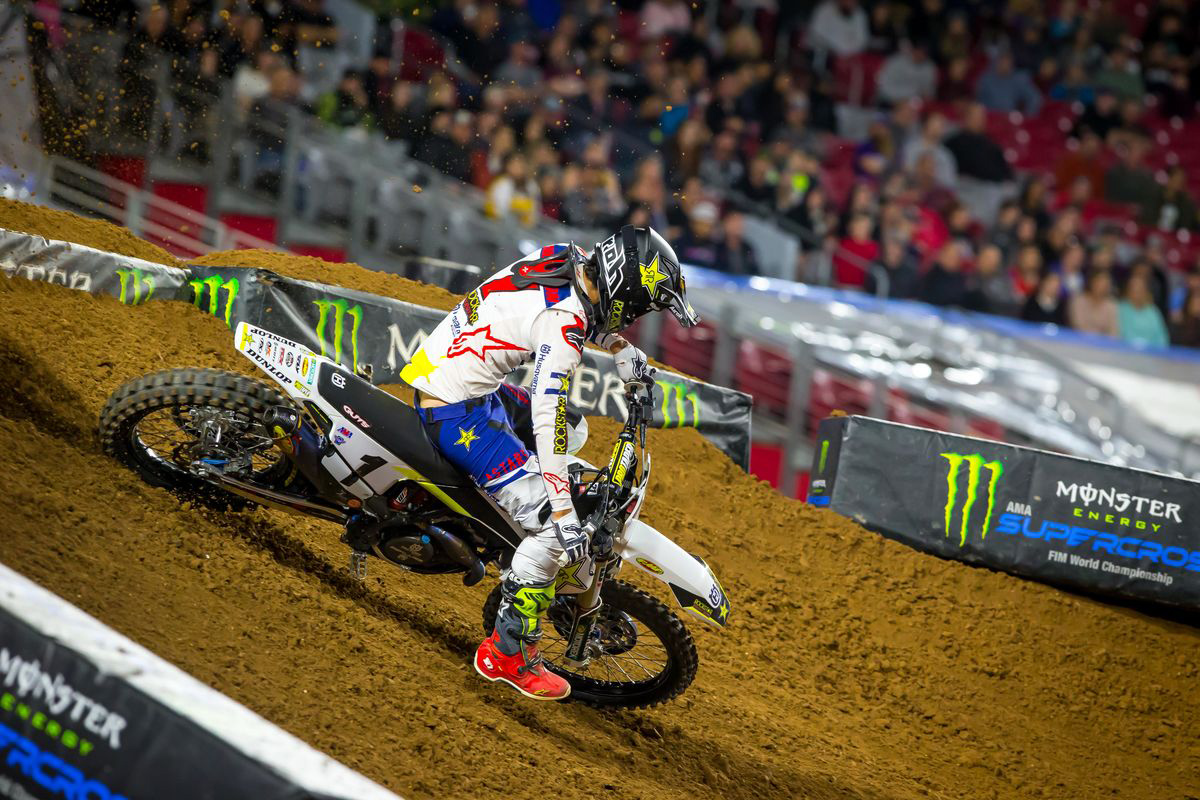 -We worried about Jason Anderson last week, he had a terrible opening round so he was on the watch list this week. Well, call off the search party because the real Jason Anderson showed up to get the runner-up spot after leading some laps. Yeah, he looked a bit tired out there as Baggett ran him down but he was 473% better this week than last. Anderson is fine, his speed is there and his fitness should improve (also he’s has comparatively less race time than the other guys).

-Adam Cianciarulo captured his first win of the season after an exciting opening round. The Kawasaki rider had a perfect night with a heat and main event win and much like Colt Nichols last week, didn’t appear to make a mistake at all. AC’s got the blinding speed and swears he can calm down and get everything together this year. We didn’t see that in Anaheim but in Glendale we did. Nichols still holds the red plate but if AC can get all the pieces to fit together, he might rattle off a bunch of wins here.