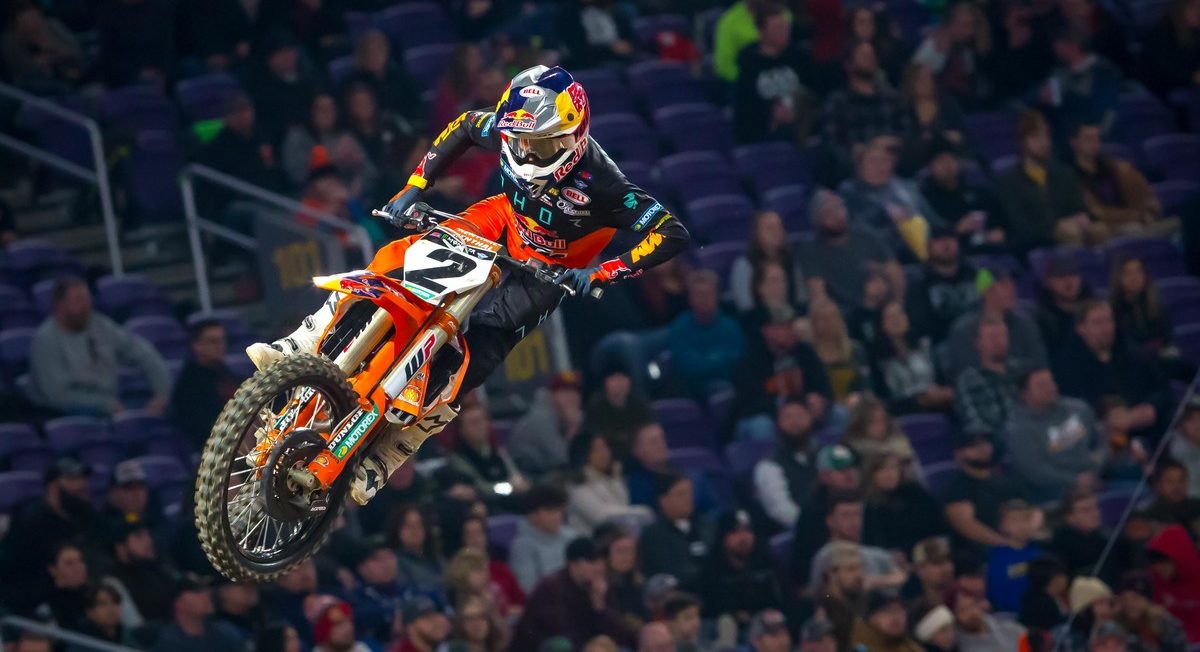 Six rounds into the Monster Energy Supercross series and we’re not anywhere near figuring out who ‘wants’ this thing. Four riders within two points for the lead in 450SX and the one who admitted that he wasn’t a title threat and 2019 was a rebuilding year for him has two more wins than anyone else. Wow, it’s setting up to be a great story. Here are some talking points from Minneapolis while we continue to thaw out.

-As stated, Red Bull KTM’s Cooper Webb didn’t think he was anywhere near ready to be a winner and title threat but his race in Minneapolis was another great chapter in this cool narrative. He stalked early leader Joey Savatgy, made the pass when the Kawasaki rider made a mistake and took off for his third win of the year. Great turn-up for sure, he looks and acts like he’s been here before which bodes well for future success for Webb. As I’ve said, he’s a multiple title winner in 250’s, having success in the 450 class is nothing that shouldn’t be expected. It’s just we all thought it wouldn’t happen this soon after two so-so years at Yamaha. Can he win this? Absolutely and what a tale that would be.

-The 250SX east coast kicked off and Monster Energy Pro Circuit Kawasaki’s Austin Forkner celebrated the win after a three-crashes in three-practice session start of his day. Once the gate dropped for the main event he was on another level though and looked great. We all know Forkner has the speed, he just has to calm down and not press so much. This weekend, when he gets the start, it’s pretty easy for the kid but when he doesn’t get the start he’s got to calm down. Watching him in practice this weekend, it didn’t look like he’d learned a thing as he sent it everywhere, but kudos to Austin, in the Main Event he was calm and in control. In my opinion he’s got the most raw speed out of anyone in the class so if he can harness it and keep mistakes down, he’ll win this title.

-Last week I covered the problem of the lime the track crew threw down in San Diego being a real issue in burning riders and wrecking bikes. Feld Entertainment spent the week issuing press releases saying they’re looking into it, calling riders and offering them 5K for the damages to bikes and bodies. It’s a pro-active move for sure and some took the offer. Some didn’t though and there was a bit of an uprising that got a few riders a meeting with some of the top people at Feld and the AMA Saturday morning before the race. Tyler Bowers led most of the charge (Cooper Webb and Chad Reed showed up, which has got to be a bit disappointing to only have two of the “powerful riders” group appear) and although it’s far from the start of an representative association (that’s badly needed in my opinion) they did have some open dialogue back and forth about different issues including that the 5K offer being not good enough for a lot of them. The promoter group agreed that they would look at the money offered on a case-by-case basis. There was a promise of having more meetings and the riders getting more of a say as well.

I asked Ken Roczen about the meeting and although he wasn’t there, I’m pretty sure behind the scenes he was talking to some VIPs and letting them know he wasn’t happy. “So for right now, we’re going to have to just get together and make some more plans and be prepared what our discussion is going to be with Feld also on some other things,” he said. “We want to be professional and just bring up whatever is on our minds and on our plate, just to make it better for everybody. That’s all we want.” Roczen added after the race where he scored another runner-up spot and took the red plate as well.

As for the promoters, they used to have a rider Rep but in their defense, they said the rider that was elected stopped showing up for meetings. Either way, it was interesting to see what came out of the Saturday summit and hopefully more cooperation from both sides is something that, at the bare minimum, is a result of this.