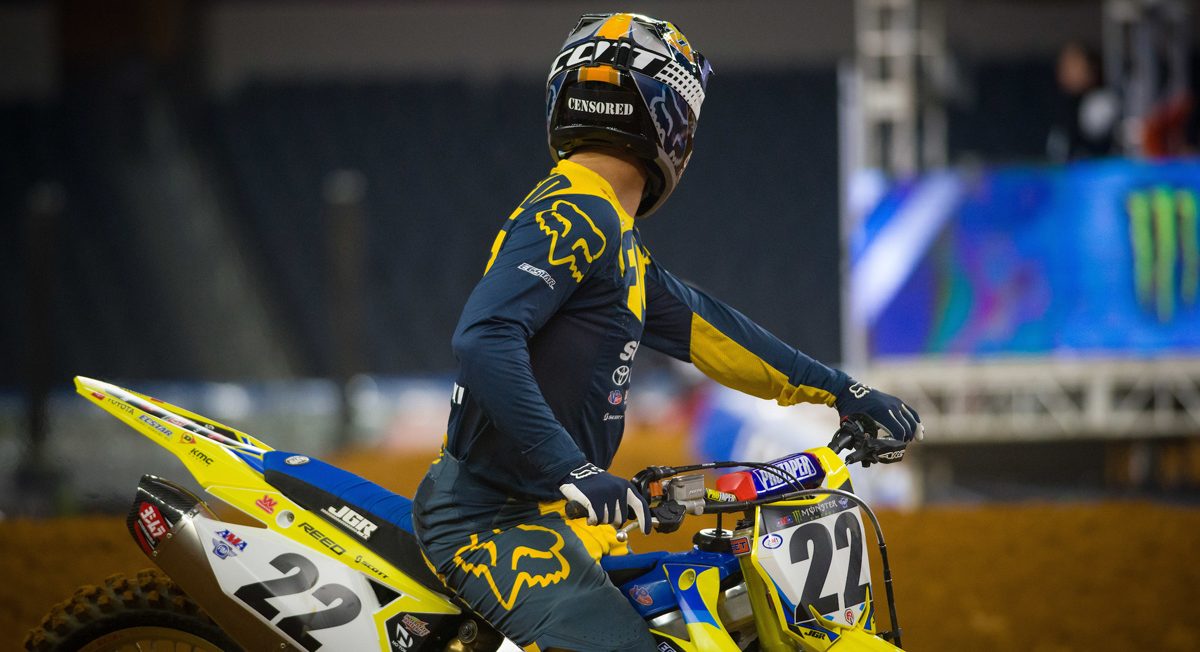 No rolling over yet

Just one week after the fallout regarding the controversy of lime that was errantly put down on standing water in San Diego and left riders with burns and some parts on the bikes being destroyed, Feld Motorsports had another issue on their hands in Dallas dealing with the incoming sponsorship of CBD oil companies. Marijuana guidelines are relaxing in a lot of states or in some cases being legalized. CBD oil, which is a non-intoxicating marijuana extract that is being credited with helping treat a host of medical problems, has even been used by some riders to cure aches and pains from the racing. We’re seeing more companies pop up selling the oil, some that are associated with marijuana companies and some are just selling the oil. Privateer Dean Wilson found himself covering the logos earlier this year when Feld told him that because of the vagaries of the laws from state to state, NBC – the network TV provider – has standing policy against accepting advertising from marijuana or CBD oil companies. This was a bit of a mini-controversy to start the series but in one sense, Wilson got more publicity out of it when the logos were forced to be covered up.

Well Chad Reed started this whole thing back up last week in Minneapolis when he debuted a helmet that had CBDMD.com logo on it. Reed, being the rebel that he is, didn’t clear it with anyone beforehand and caused a bit of a stir before the race. His stance was that this company, unlike Wilson’s, just focused on the oil itself and wasn’t selling marijuana with another branch of the company ala Dean.

“I think it has its place. I really do. For me personally, a hundred percent the reason why I started using it is I moved to Charlotte and couldn’t ride my bicycle because it was so cold,” Reed told me. “So I started running again. I was just like, dude, I can’t run. My ankle just hurts daily. So I kind of almost caved into ‘I’ll try it’. Everybody talks about it. So I tried it and long story short, I didn’t even know but ended up with the one brand I bought was cbdMD. They’re locally in Charlotte. It was kind of funny how it all worked out. But I think short-term sucks, but I think that long-term they’re here to stay.”

So Reed was allowed to race with it and Feld went back to the drawing board with its lawyers and the AMA. We saw a press release get issued by the AMA late last week:

• The law regarding CBD products, including their lawful sale, possession, advertising, and sponsorship of them, is unsettled. Notwithstanding the change in federal law in December 2018, there are no federal regulations in place yet on how these products can be advertised or promoted. No CBD and related products are not completely legal in all 50 states and there are various restrictions on their sale and promotion.

• Signage or promotional displays for CBD-related products will not be allowed in the pit areas.

• No rider will be allowed to race with logos or other promotional displays on their person, their uniform, their gear, or on their bike.

So that was it, Feld brought the lawyers back to meet with the riders first on Saturday morning before Dallas and then with the media after that. Basically it was explained that yes, the bill that was signed in congress makes the path to marijuana, and therefore CBD oil, being completely legal on a federal level but it’s still up the states to decide what they want to do and that’s a long way down the road. So the policy that shaded Wilson still stands and Reed’s helmet had to be covered up.

The bill being signed and reported in the news confused fans and teams. Not to mention the sight of some CBD oil companies being plastered on riders competing at the recent X-Games on another network. And I don’t know if you’ve looked around the pits these days but the sport could use a bit more outside money coming into it.

We’re all pretty sure, and the Feld rep agreed, that shortly all of these concerns will be alleviated and TV networks will accept the dollars these companies, that are doing very well, will be throwing at them. It’s a larger question that exists outside of our small sport right now but, like the energy drinks fifteen years ago, could really give the sport a bit of a jolt. The effects of the CBD oil can be debated over and over, this isn’t the column for that but just know that some people, including Ken Roczen, use it and are fans of the oil’s therapeutic properties. It’s also legal to use via the WADA drug code, which is a bonus obviously.

“Obviously it’s frustrating. I feel like they’re reacting a little bit too quick on it. I think it’s one of those things where it’s of ‘an opinion’. I don’t know that there are a lot of facts,” Reed said about the decision “I think they have certain information that they’re reacting to. When I asked those same questions to the cbdMD people, they obviously are not as concerned. It’s an ongoing fight for them. So I think short-term it sucks but I believe it’s something that they’re not going to be able to turn a blind eye to. I think that daily, hourly from what I understand…”

As great as the racing has been on the track, and it truly has, the off-track issues have been a real developing issue in 2019. We’ll see what comes of this in the coming months but one thing for sure, between the lime in San Diego and now this, the fans have been really treated to some juicy topics this year. Stay tuned!