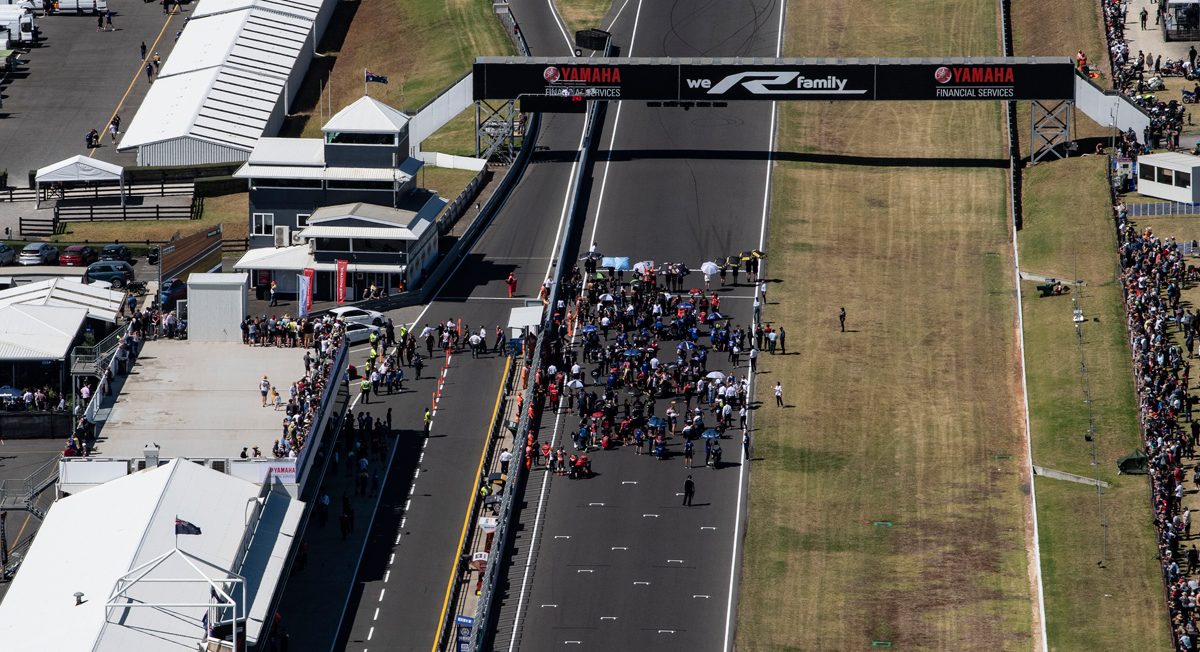 In the 20 or so years I have been photographing motorcycle racing I have never seen anything like that. The way Alvaro Bautista demolished the opposition over the weekend was incredible.

Everyone came to Phillip Island with a real sense of anticipation. There were new riders, new bikes, new rules and a new format for the race weekend. It was expected to be a bit of a spectacle but what we saw was something no one had or could have predicted.

I would put money on Bautista being in row one on the plane, his bags arriving first on the carousel and he was first in the rental car queue. I reckon from the moment he set foot in Australia he was first for everything. On track he was fast all week, in the two days of testing and all three races he ended up top of the pile. It was only in Superpole Qualifying that the Kawasaki’s of Rea and Haslam got the better of him, and JR came away from the week with a new best lap time during the new Superpole race.

It was a dream debut in WorldSBK for the Spaniard and one that will set off some alarm bells for the challengers but also for the organisers.

On reflection, Bautista and Ducati really did have to win. After more than a year of development on the bike, which is heavily based on their MotoGP prototype, and what seems like a budget ‘no option’ programme, anything other than a win could have been seen as a failure for Ducati. Bautista replaced Marco Melandri, a proven race winner for them in WorldSBK, so would have been under pressure to prove any doubters that that selection was right. Melandri himself won both races in Phillip Island last year so anyone betting against Ducati winning again at the Island was being pretty bold.

Before Saturday the over-riding issue for discussion had once again been tyres, for the umpteenth year. It is an issue that the championship organisers and sole tyre supplier never seem to address. The WorldSSP race had to be made flag-to-flag with a mandatory pit stop between laps seven and nine. The race was also shortened to 16 laps instead of the scheduled 18, solely for safety purposes. The tyres that Pirelli had in Australia just would not last a full race distance, a problem that persists year after year. A similar plan was muted for WorldSBK, as in 2018, but in the end it wasn’t required.

I had dinner with some of the management from Phillip Island circuit on Wednesday night and it rankles with them that year on year they sell their event to TV and fans alike for 22 laps of Superbike and 18 laps of Supersport racing, and every time there are safety issues over tyre wear and races are altered or shortened. During the safety inspection on Wednesday before the race weekend they had been amazed at the amount of rubber (marbles) that were on the track after the two-day test. I have a great degree of sympathy for Phillip Island Circuit as it is constantly put forward that the problem lies with the re-surfacing of the track but that was seven years ago and no progress would appear to have been made with tyre development since.

Amongst the dissenting voices up and down pit lane, and in the press office, there were one or two that argued that Pirelli – or any sole tyre supplier for that matter – could not possibly develop tyres that will meet the unique conditions of each and every circuit. That defeats the purpose of having a sole supplier and reducing the costs for competitors but my snapping wingman and former racer, Jamie Morris, contested that the tyres should be designed for the worst case conditions and then work back from there. If that means lap times are two – three seconds slower then so be it. At least you will get the whole grid pushing as hard as they can for the full race distance.

Which brings me back to Bautista’s performance. Current champion and erstwhile vanquisher of previous all-comers, Jonathan Rea, made some interesting comments in his post race interviews. The armchair, keyboard warriors immediately jumped on it as sour grapes but he raised a couple of relevant points.

Speaking to him on Saturday he admitted he was riding nervously. He had previously suffered a monumental crash at Turn 3 when riding the Honda and also through Craner Curves at Donington a year or so ago because of a blistered tyre that let go.  He had blistered a tyre in testing and again on Friday so opted for a safety first policy.

On Saturday night I made my annual trip to Woolamai Beach at night to photograph the night sky and I went with a race team engineer who backed that up with facts. He pointed out that Bautista’s race pace was only a few tenths faster than that of Melandri last year but everyone else, not just Rea, was riding at a slower speed, speculating that that was all to conserve tyre life. Michael van der Mark also reckoned that he was getting six or seven laps of optimum tyre performance before it dropped off markedly.

Going back to the beginning of my ramblings, I said that Ducati really did have to win, given their investment in time and budget in this V4 Superbike project. What they have produced is a bike that has an upper rev limit of around 1700 rpm more than anyone else. That only comes by spending money on effectively developing a race bike and fitting wing mirrors and lights to it to sell as a road version. They will sell all they build to meet the homologation numbers, most of them for race bikes I would imagine and the showroom version is an eye-watering  40,000.00 euros. The Japanese manufacturers approach superbike racing from the opposite angle. They build a bike for the road, in terms of usability and price, have a higher production run, and then turn it into a race machine. Compare Honda’s RC211V road machine with their current Fireblade and you will understand a bit more. All Honda need to do is reduce the selling price of the RC211V to €40,000.00 and it becomes eligible for superbike racing but how then do you market and sell the Fireblade?

JR also mentioned the difference in the way the Ducati’s V4 engine generates its power over an in-line four. I won’t pretend to understand the mechanics but it is something I have heard before when comparing a V-twin to a ‘four and how the pulse from the engine, every time the piston fires, is delivered to the rear tyre. Rea could witness how the new Ducati V4 was hooking up coming out of the corners every lap, well until Bautista was two corners clear.

All that aside, looking further down the results table I was hugely impressed by Leon Haslam. He really took the fight to Rea and apart from one small mistake on Saturday would have had a hatrick of podiums on his return to the series. Marco Melandri proved his worth by scoring a podium on Saturday, going toe to toe with Alex Lowes all weekend, also proving Lowes’ prediction that the Yamaha will be a serious Podium contender all year. Leon Camier also rode well, finishing higher than he probably should have been on the perennially struggling Honda.

The bandwagon moves to Thailand now and we will see if Bautista’s performance this weekend was a one off or a portent of future results. That would give Dorna a bit of a headache I reckon. They have been vocally critical about Kawasaki’s domination in the past and changed the rules and race formats to try and peg back Rea. How long will it be before the Ministry of Tinkering will be looking at the rulebook again if Bautista dominates in the way he did at the weekend?