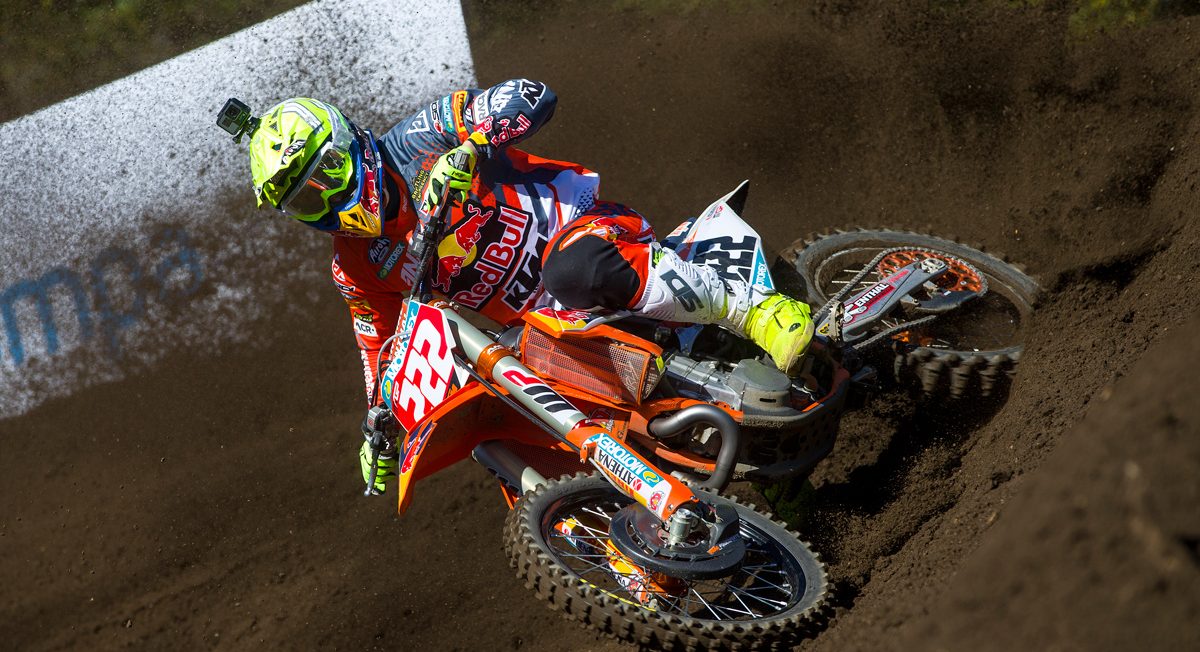 The importance of the first one

Almost twelve months ago MXGP World Champion Tony Cairoli was stood on the first podium of the 2018 season, breathing heavily, slightly bewildered and a little p***ed off.

At the back of the Italian’s mind, somewhere and somehow, there was also a flicker of calm. Nine world championships, eight-three grand prix wins, fifteen years and two of the last three spent dealing with the annoyance of injury all carried a deep reserve of experience.

The first Grand Prix on a calendar can mean a hell of a lot. It is also the initial thrust of many in the fight. It is fascinating to watch how professional racers tackle and then cope with the aftermath of a championship opener. In Cairoli’s case the defending No.1 came to the Neuquen circuit in Argentina after strong pre-season, another Italian domestic crown, the incentive of a tenth world title and the knowledge that Red Bull KTM teammate Jeffrey Herlings would represent his hardest ever challenge. He earned the first Pole Position of 2018 and then won the first moto by a second from the Dutchman. Cairoli was a lap away from making it 1-1 before Herlings’ emphatic assault and victory, thus earning the overall triumph and putting Cairoli – who’d erred several occasions while leading – on the second step.

It was clear the defeat stung. Some of Tony’s post-race comments carried the tone of frustration but he was also swift to (at least publicly) default to the position of acknowledging a strong result to begin the campaign.

The nerves and excitement of the first race (and on a circuit that almost all the riders like to attack) means that Grand Prix #1 carries special significance…but depending on the classification on Sunday afternoon a rider may then dismiss or harness the overall emotion and feeling from that unique twenty-four hours. Cairoli was fast, mostly-consistent and represented the sole affront to the Herlings threat. He could have soaked-up a win that could have been a big statement against his foe and the rest of MXGP – and those that were perhaps questioning his age and ability to tussle with younger opponents – instead he was having to equate the day as 47 points banked.

In a different place emotionally, try telling Herlings the day at Neuquen only signified points. For the Dutchman it was a risky and thrilling repost to Cairoli’s A-game. He rallied from the arm-pump that affected his Saturday Heat race to pound an exhilarating stamp on the series. You could argue that (while there were still hundreds of miles of racing laps to run) he laid the first slab of a dominant championship in that Argentina volcanic ash. The belief and confidence flowed from that moment. Herlings is also wise to the tremendous highs and lows of this sport so would not have sailed too far on that one-day achievement but he  – and maybe others in MXGP – knew something that brewing that Sunday.

It is possible to count the hours until MXGP 2019 bounces free of the start devices. Once again Cairoli is the man of the pre-season events and he is almost unbeaten in three rounds and weeks of Italian competition (teammate Jorge Prado actually holds that distinction in MX2 and must be odds-on to sweep Neuquen). He might have had to realign his orientation on Neuquen however. Considering Herlings’ strength in 2018 an equal-points finish would represent a very good day at the races if the Dutchman was still in commission. Tony may have said in these very pages that he is “out to win” in 2019 but he has all those FIM medals because he knows the price of a GP top three and top five result in the premier class. Now in Argentina he must be aware that anything like the performance levels of 2018 means that extra dose of elation.

Or does he? Many riders in the off-season talk of ‘focussing on themselves, their programmes, their own potential’. It means when they all push into the gate for that very first moto on Sunday in South America they will be looking along the line wondering whether their whole approach and winter of work has actually hit the mark. It is hard to imagine they are not curious about the others. They will have seen crumbs of speed, fitness and form in races like the Italian series and Internationals at Hawkstone Park and LaCapelle Marival but that is also a time when tests are ongoing and experienced campaigners will not be rushing to find limits. Riders even talk about not ‘wanting to peak’ in the first Grands Prix of a seventh month trawl across the globe so that could add extra irrelevance to Argentina and the results sheets.

A host of different physical and mental regimes and individual stories with confidence, set-up, team chemistry and confidence will be colliding in the din of revving throttles behind the gate. It is revealing to hear Romain Febvre saying that thoughts of his rivals in 2018 was actually detrimental. Surely some appreciation and analysis of the others is smart strategy? Perhaps in a sport where the parameters and boundaries move week-on-week depending on track, conditions and fitness then it’s just too much to digest.

Round one can be a confusing situ of smoke and mirrors but – as presumed with Herlings – it can be a launch pad, and Jeffrey isn’t the only one. Pauls Jonass was rarely more comprehensive in 2018 than at Argentina and cleared-off with the next two Grands Prix. Back in 2015 Max Nagl won in Qatar and then Argentina also and led the championship for the first half of the season.

However, while interesting and often surprising the ‘power’ of the first round is debatable. Cairoli is actually the strongest example for this. #222 has won in the premier class in 2009, ‘10, ’11, ’12, ’13, ’14 and 2017. Guess how many times he claimed the opening Grand Prix in that period? Just twice: 2012 and 2017. In 2011 he struggled through an injured knee and was 9th overall in Bulgaria: the worst ‘opener’ in his career in the MXGP division…but he still gathered the bigger prize. And yet…we can surmise that his vitality in conquering the last Grand Prix of Qatar two years ago was also a ‘latch-freeing’ exercise towards the ninth world championship? After all it was his first Grand Prix win without pain or restriction after 2015 and 2016.

Pre-season activities can also muddy the water. I’ll still put a 20 euro note on the table that a rider like Kemea Yamaha’s Ben Watson (whose 4th position at Neuquen kickstarted the next level of his GP career) will be fighting for the MX2 podium in Argentina…but the Brit’s 2019 races so far have seen a litany of issues both bike and rider related. On the other hand countryman Adam Sterry made a fantastic GP debut in Argentina two years previously and shone at last weekend’s Hawkstone Park International but now has to step-up and prove his chops in Grand Prix. Who will make the two flights and 27 hour trip back to the UK with some shiny metal and a (possibly beneficial) glow?

Grand Prix number one: it’s not easy to deduce it’s importance but it can be an early and possibly vital part of a racer’s story come the wind-down of another year.