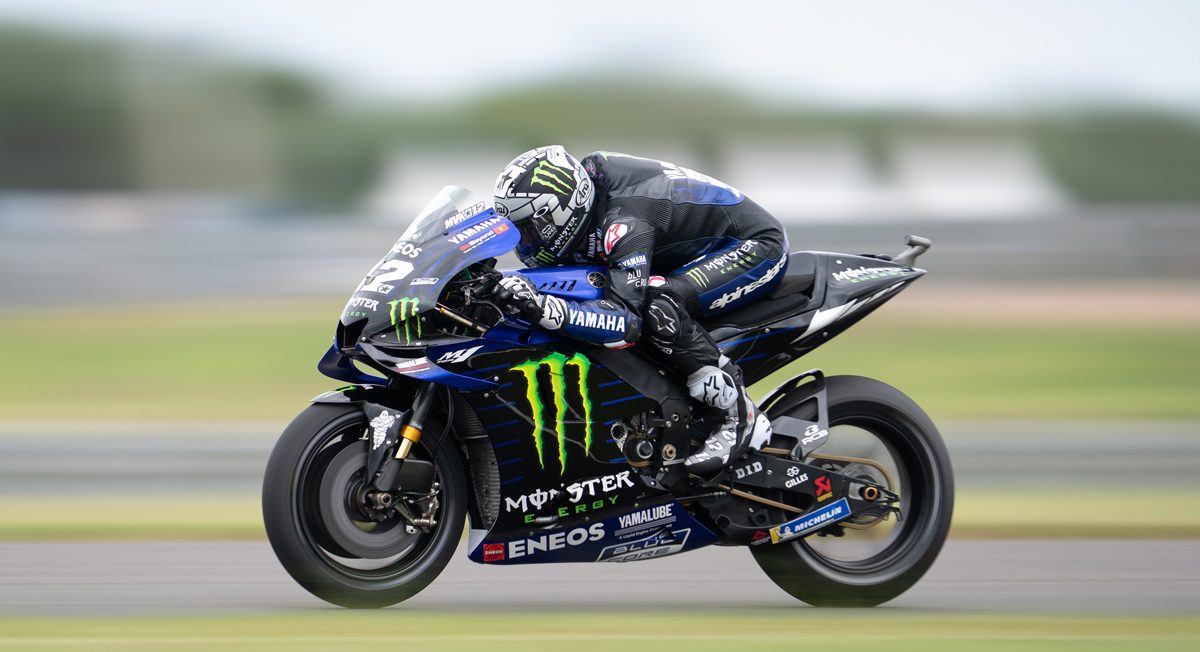 There were some pointed comments from Marc Marquez on Sunday night in Qatar. “Of course it’s interesting that in preseason we see many names and many manufacturers,” he reflected soon after playing a part in MotoGP’s closest ever top five finish. “But then arrives the ‘real time’ and it’s the same names.”

The reigning world champion had just gone toe-to-toe with three of last season’s final top five – Andrea Dovizioso, Alex Rins and Valentino Rossi – as well as a limping Cal Crutchlow on his injury return. The services of Sherlock Holmes were certainly not required to decipher at whom he was referencing.

It was at the end of last November when we witnessed Maverick Viñales assert that the re-energized #12 twisting the throttle of Yamaha’s new M1 had the potential to fight for this year’s world title. Yet come the most critical moment during this new start, Marquez was right to posit: where was he?

Seventh place in Losail, 2.4s back of the race winner, wasn’t necessarily a disaster but on the back of a comfortable pole position, and so much preseason promise (first place at two tests with unerring consistency at Sepang and Losail), it was a strangely subdued showing toward the back of the lead group. It was one that did nothing to hush those who, with some justification, have come to label him the ‘King of Testing’.

There were certainly puzzled expressions when Viñales explained what had gone wrong under the floodlights. Despite his clearly superior pace, he was unable to overtake those ahead. During practice for the next round, he said, focus was tuned toward “simulating the lines of the race, fighting with the others.” Call me old fashioned but had this not occurred to him before round one?

The mind quickly flashed back to that Moto3 championship year in 2013, when he so often lost out in a final lap fight despite an unerring proximity to the front. He was never further than 1.055s from the race winner in 18 races. Yet he won just three (one of which was red flagged early). Unlike Marquez, Rossi and, lately, Dovizioso, elbows-out scrapping has never been a Viñales forte.

In Argentina there was more head scratching. The 24-year old appeared to overcome the biggest hurdle on Friday morning. On a filthy track, Viñales was only 18th fastest in FP1. By the afternoon, however, there was no wild gesticulating, or shaking of the head. He was among the three fastest riders. In Sunday’s 20-minute morning warm-up he showed speed and consistency to suggest Marquez might have a thing or two to ponder that afternoon.

Crew chief Esteban Garcia and rider coach Julian Simon – new recruits, brought in to maintain an air of calm in the #12’s garage corner – had certainly earned their keep here.

But the problems persisted come 2pm. Viñales went backwards early on, and never looked capable of matching team-mate Rossi’s lurking prowess. In the opening laps it “was like I had really old tyres,” he said later that afternoon. “[In warm-up] I used the rear from qualifying and said, “Wow, the grip is excellent”. So I thought in the race I could go so fast, I thought I would be able to go with Marc. But then in the race with new tyres, I felt like it [the rear had done] 20 laps – very strange.”

Now we’ve been here before. Last season’s failings were rooted in a similar inability to cope with the frenetic nature of a MotoGP start, those opening laps when a full fuel tank demands braking markers are revised, and a fresh sheen of Moto2 Dunlop rubber covers the track surface. “This never happened to me when I was in Suzuki, and not in the first part of 2017,” he said, clearly baffled. It’s never reassuring to see a rider at a loss to explain such events. Especially when an older, and possibly wiser teammate is several places ahead, extracting the maximum from his package.

This can’t be an easy time for Viñales. While in his previous seasons with Yamaha on-track failings had a clear cause (2017, Michelin’s mid-season front profile switch, 2018 a frustration at bike development not going in his direction, a break down in relations with crew chief Ramon Forcada), his current struggles point to his own weakness. A member of Yamaha’s staff that shall remain unnamed went as far as to indicate the issues he regularly encounters off the line are a result of the pressure he places on himself.

Yamaha bent to last year’s desire to reshape his team so the buck must now stop with him. Even without the unfortunate collision with Franco Morbidelli on the final lap of Sunday’s affairs, Viñales would still only have amassed a points total of 18. As it stands he’s already 36 points in arrears of Marquez.

But the season is still early, and all is far from lost. What we did see in Qatar and Argentina was a rider willing to accept some of the blame. On both occasions he admitted he was at fault for poor starts. And while unable to offer up any answers, he did have the good sense on Sunday to state those opening lap ordeals were unique to him.

Along the way has remained upbeat and willing to engage in his obligations with the media, even offering a hint of self-deprecation to proceedings. On Friday he was poking fun at his own inability to start well. A minor point, yes, but how he holds himself is a far cry from the unengaged, monosyllabic mass we often encountered in 2018’s tougher moments, when Yamaha Managing Director Lin Jarvis noted his rider was “frustrated and depressed” by the predicament.

New crew chief Garcia has something to do with this. It was interesting to observe him warmly embracing his rider and other members of Viñales’ crew two hours after the season opener in Qatar, reminding them of the positives of that weekend. And he was right. It wasn’t as though the first two rounds have been a write-off. Viñales has been among the three fastest men at both Losail and Termas de Rio Hondo in practice and qualifying. The potential is there. Even on Sunday he could overtake late into the race, an ability that deserted him in Qatar.

“I think we worked well. On Friday we started 18th, and we turned it up. In the warm up, I felt so strong, and I felt with the potential to be with Marc, and to at least be second,” he said. “[At the end] I felt good because I overtook Morbidelli in turn two, I overtook [Jack] Miller. It was quite different than Qatar, I had the opportunity to overtake at the end of the race, I could pass many riders.”

The truth is Viñales is still a work in progress. Rossi, Lorenzo and Marquez aside, name a rider in recent times that wasn’t the finished article at his age? The problem of riding alongside Rossi is that every flaw will be exposed, as the 40-year old is still capable of regularly running at the front. The rider from Roses has the key near the lock. There is a reason why Marquez continually tries to rile him up. He knows Viñales could – and should – be among a select few that can live with his speed. But with new personnel and a new bike in his garage, it’s now down to the new Maverick to find a way to overcome this.