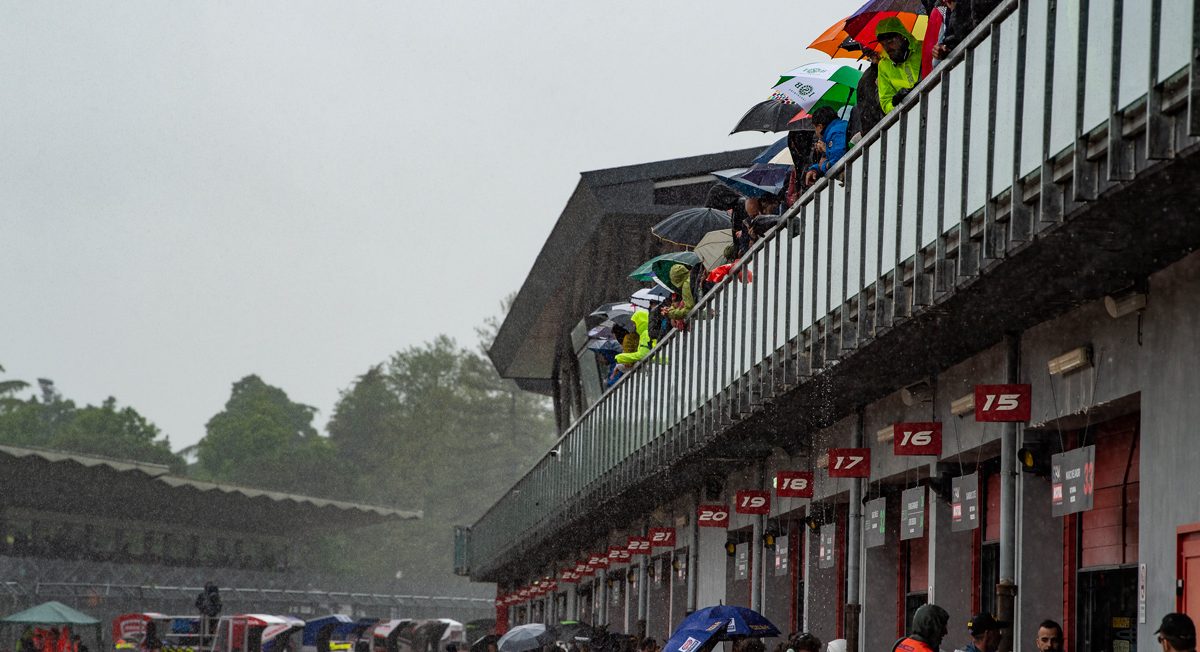 It never rains but it pours

Living in Scotland means I am used to all the jibes about rain, and all the retorts as well – there is no such thing as bad weather, just the wrong clothing – your skin is waterproof and so on. Working at a race in the rain is not necessarily something I would chose to do but it really doesn’t bother me if I have to.

Every weather forecast for Imola for the weekend had it nailed-on to be wet on Sunday. When we arrived at the track there was a little bit of rain in the air, enough for warm-up to be declared a wet session but it wasn’t properly chucking. By 11am, when the bikes lined up on the grid for the Superpole race, it had dried up. I was all ready with the rain covers on my cameras and my wet weather gear in my bag. I was hoping that if I was over-prepared the it would all actually stay away.  It wasn’t to be.

When the showers came on, around 45 minutes before the start of race two, it was the first real rain we had seen all weekend. It wasn’t however a biblical downpour and I have certainly shot a race in worse conditions.

However, Jamie Morris and I had discussed this on Saturday night and I predicted that if the deluge was heavy enough there would be no racing on Sunday. He scoffed at the idea. I remembered, however, being in at Imola in 2005 when Troy Corser won the championship after the second race was cancelled due to the rain. He led Chris Vermeulen by 55 points in the standings and with only the final two races to take place in Magny Cours, he could not be beaten. There had been other times when heavy rain had caused sessions to be shortened or cancelled at Imola so I was ready for drama.

What I didn’t expect was that the drama would be played out at the end of pitlane in front of the media.

After it was decided to delay the race start a few riders were driven round the circuit in the safety cars to witness the conditions out on track for themselves. They came back into pitlane and congregated at under the podium at top of pit lane. When everyone saw what was happening there was a mad dash of photographers and TV crews to capture the impromptu meeting.

Lavilla basically asked the riders what they wanted to do and in the end didn’t get a straight answer. He took the middle ground and offered a normal start procedure, where pit lane was open for five minutes, the riders could get two laps, using pit lane, and then decide on the grid if it was safe or not. I left with the riders just as Charlie Hiscott from Eurosport started to quiz Lavilla why he hadn’t just made a decision and had left it to the riders to decide.

As we now know racing was cancelled for the rest of the day. Charlie got a lot of stick on social media for pushing Lavilla on the issue, with some fans saying that if the riders felt it was unsafe their decision should be respected. There were others that felt they were being short changed. I read several comments that suggested the riders are paid professionals, riding in a World Championship and should accept that they have to ride in the rain.

Chief amongst those in the ‘unsafe’ camp was championship leader Alvaro Bautista.  I was stood next to him in the pit lane scrum and he was not concerned so much about the rain, he said he had raced in worse weather than that, but that he feels the track at Imola is inherently unsafe for racing in the first place. He said that the track was not safe in the dry and was therefore worse in the wet. Jamie spoke with Alex Lowes as the riders made their way back down pit lane and he said that in some places the spray was so bad that you couldn’t pick out the braking points and there was standing water on some corner exits that meant the rear tyre was spinning up even with the traction control.

But hang on. Are these not some of the best riders in the world at the top of their game? Surely they should be able to ride in any conditions.

In all the mutterings and grumblings over the lack of decisiveness on the matter, one thing struck me. There doesn’t seem to be any rules on the issue. I have quickly checked through the current regulations and couldn’t find anything, but in the fog of my memory I recall there being a rule or a concession along the lines that if Free Practice and Qualifying took place in dry conditions, and it rained on race day, then a 20 minute Free Practice session was declared for the riders to confirm their wet set up and get used the track condition.

I will pause to add a sobering comment. In 2012 Kawasaki Racing Team’s Joan Lascorz crashed in testing at Imola, in the dry, and was subsequently paralyzed. The details surrounding the crash are still a bit vague but he reportedly hit an unprotected section of concrete wall, of which there is a lot at Imola, and on places very close to the track.  Bautista may have a valid point. Imola may not be an entirely safe track for modern day Superbike racing.

A 20 minute FP session in the wet may not have changed the situation and – let’s face it – this is not the first time racing has been cancelled due to heavy rain. Alongside that 2005 Imola race, I was in Phillip Island in 2001 when a race was cancelled due to rain and again in Silverstone in 2007. Sometimes it just can’t be helped. What I would say, however, is that a clearer decision making process is need in these circumstances and that decisions should also be taken by Race Direction in private, whether that involves the riders or not.

It’s actually a real shame we didn’t get a race two on Sunday and like many I feel sorry for all the fans that turned up and got soaked and didn’t get to see the main event.  However, let’s go back a couple of weeks to OTOR #186 when I spoke about the Netflix series on F1. As Sunday’s drama played out in pit lane I couldn’t help thinking that this kind of conflict and it’s resolution is exactly the type of situation that makes great television and was a different type of narrative for the weekend.