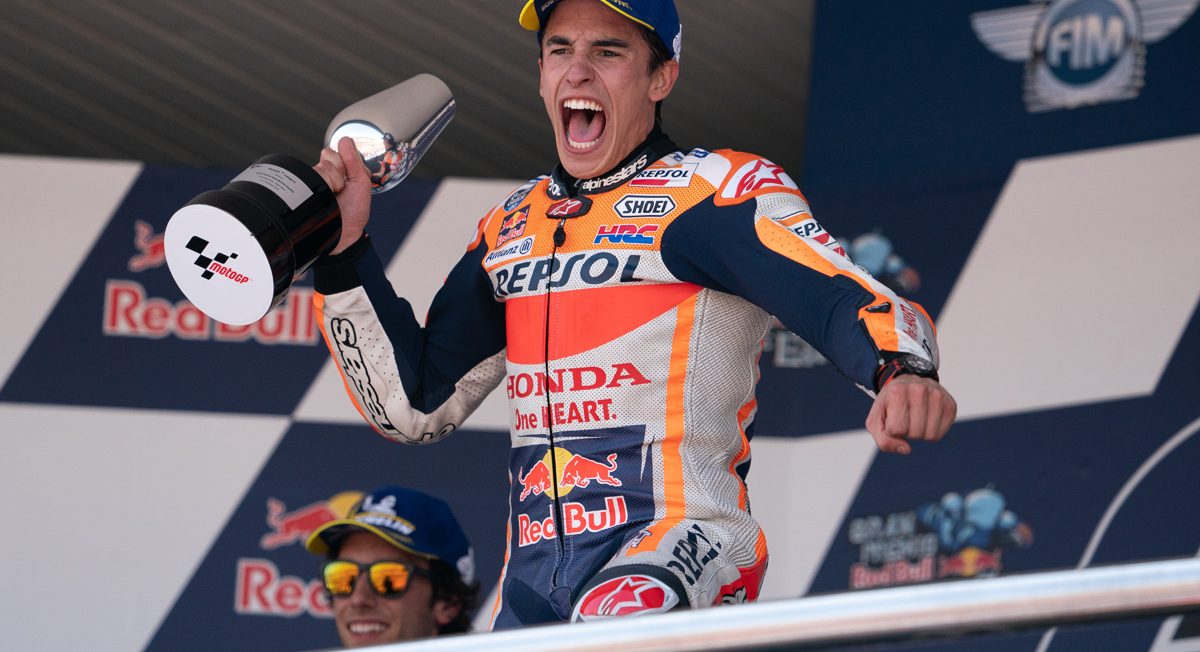 Where next for greatness?

Five races in, and Marc Márquez looks well on his way to the 2019 MotoGP crown. On a bike which is fast, but harder to ride – see the results of Cal Crutchlow for a comparison – Márquez is finding new ways to win, new ways to beat his rivals. He makes winning look easy – he has led for about 70% of laps raced – and his margin of victory is convincing. Even after slowing down to celebrate, he won by 9.8 seconds in Argentina, 1.6 seconds in Jerez, and nearly 2 seconds at Le Mans. He also crashed out of the lead in Austin, when he was nearly 4 seconds ahead.

He is tearing up the record books too. His current tally of premier class victories stands at 47, level with Jorge Lorenzo, who is in his thirteenth season compared to Márquez’ seventh. He has 73 wins in all Grand Prix classes, just three behind Mike Hailwood. In premier class victories, he has only Giacomo Agostini, Valentino Rossi, and Mick Doohan ahead of him. In total GP wins, only Rossi, Ago, and Angel Nieto have more. At 26 years of age, it seems like only a matter of time before he catches them.

Or will he? Extrapolating future success from previous seasons can be a dangerous affair. In the six seasons between 2000 and 2005, Valentino Rossi racked up 53 wins. But he had grown bored of doing it so easily, even after switching from Honda to Yamaha and winning first time out on the M1 as well. He toyed with the idea of a switch to F1, lost sight of development of the Yamaha M1, and ending up claiming just 5 races in 2006, compared to 11 in 2005. He lost the 2006 title to Nicky Hayden in an unforgettable season ending. Rossi was 27 years old at the time.

Could this happen to Marc Márquez? So far, there is no sign of his motivation starting to lag. He is as dedicated and concentrated now as he has ever been. Outside distractions are eschewed, even romantic ones, despite reports of various amorous liaisons. Yes, Márquez has driven an F1 car, but he has shown no desire to actually pursue a career on four wheels. He rides flat track and MX bikes to train, and because still loves it. His heart is clearly still in MotoGP.

Will Márquez ever need to find extra motivation? At the moment, winning itself is motivation enough. He has shown no interest in statistics or records, just in winning, and in finding new strategies, new approaches, new ways. Outfoxing his rivals is as rewarding as beating them outright. “Sometimes you need to find different strategies for your opponents,” he said at Le Mans. “If not, everybody expects you to do the same. If somebody is doing something new, in some races pushing from the beginning, in another race saving the tire, you don’t know if he’s saving or pushing.”

But once Márquez proves to himself that he can beat his rivals in any way he chooses, will he seek out fresh challenges? He has reason to stay loyal to Honda. After the 2015 season, he started to exert his influence over HRC, asking for changes to be made to development and testing programs, to ways of working, even to senior personnel. HRC obliged; they know that right now, they need Márquez to win titles, and do not want to lose him. Márquez has bent HRC to his will, and that is a valuable prize.

Perhaps money will tempt Márquez away. Ducati tried to poach the Spaniard ahead of the 2019 season, but he opted to remain with the Repsol Honda team. KTM can ask Red Bull for almost any number Márquez should care to think of, and probably double it. But Márquez has never shown a mercenary streak. He gets paid plenty – since Jorge Lorenzo left Ducati, he’s probably the best-paid rider on the grid – but money can’t buy you race wins and MotoGP titles, and those are the only things that count for Marquez.

Would he switch to Ducati to dismiss the comparisons with Valentino Rossi, and criticisms that he has only won on with Honda? Maybe if Rossi himself were to start the goading. Márquez seems immune to fan criticism, but if Rossi started playing up the point that he won on two different bikes, that might just work. But even then, Márquez’ priority is simple: winning more races, winning more titles.

In that, Márquez is more like Mick Doohan than Valentino Rossi or Jorge Lorenzo. More like Belgian cyclist Eddy Merckx, whose love of winning was so immense that they nicknamed him The Cannibal. His hunger for race wins is greater than for fresh challenges. I suspect that the only way we will see Marc Márquez with a different manufacturer is if Honda can no longer satisfy his appetite for victory.