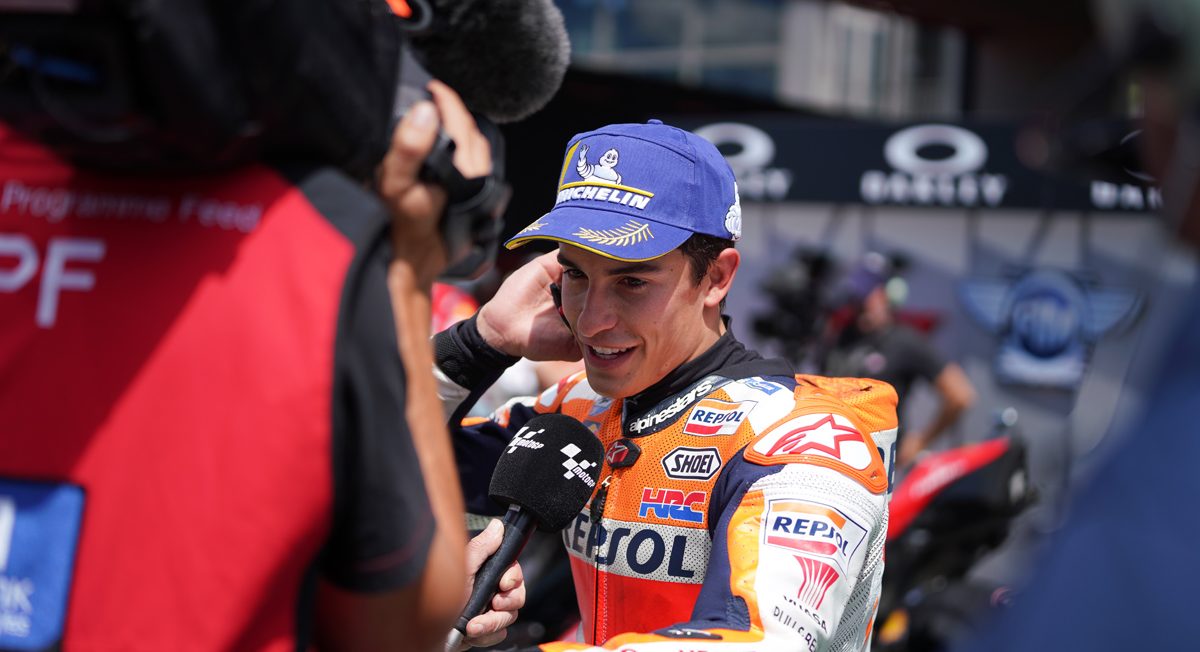 When a sportsman is operating at the peak of his powers, holding off opposition at arm’s length, it’s natural he will dive into the art of mind games and verbal sparring.

2019 has been another year marked by Marc Marquez’s on the edge riding, eye-catching saves and daredevil overtakes. But he has added two new strings to his bow for his attempt at winning a sixth premier class title.

Leading from the front, dictating the pace is one. Not only that; the reigning world champion has been as calculating and relentless with his verbal digs as at any point in his career, taking glee in dictating psychology from his dealings with the media. As OTOR contributor David Emmett coined it a few weeks back, Marquez is “reaching the ‘Evil Genius’ stage of his career.”

Few of his rivals have been spared the attention in the first five months of the season. Here we take a look at some of Marquez’s memorable comments from this year, and what he truly meant by them.

“In pre-season we see many names and many manufacturers. But then arrives the ‘real time’ and it’s the same names…”

The services of Sherlock Holmes were not required to decipher at whom he was pointing these comments in Qatar. Marquez had just gone toe-to-toe with Andrea Dovizioso, Cal Crutchlow, Alex Rins and Valentino Rossi for 22 laps in an epic curtain raiser. But what of Maverick Viñales, king of testing and that weekend’s pace setter and pole sitter? His fellow Catalan was unable to make any impression on the leading group despite having the speed to win. Such a pattern of lousy starts and listless first laps were prevalent through five of the first six races of the year. Marquez had clearly doubted Viñales’ title credentials early on, and with good reason.

“His strongest point is that he doesn’t have pressure at the moment… Sure, it will arrive, slowly.”

This came mid-way through an assessment of Alex Rins’ title challenging credentials. The Suzuki man had just strung together back-to-back podiums at the Circuit of the Americas and Jerez. And while Marquez was initially positive of his countryman’s on-track exploits from the winter testing campaign, he also let us know that Rins had been operating in a bubble free of intense pressure. “If he finishes second, he’s happy … he finishes third, he’s also happy.” He had a point. Tougher challenges awaited. And as Assen and the Sachsenring showed, Rins still has some way to go.

“The strategy was a good one; but it was created by them, not by me.”

Always quick to sniff out an opponent’s plan, Marquez was at his brilliant best during qualifying for the Italian GP. During his first run in Q2, as Ducati wildcard Michele Pirro followed his every move, he sensed the Bologna manufacturer had hatched a plan. That was the incentive he needed. As the clock ticked down, Marquez thought on his feet. “I stopped in the box and said to Santi [Hernandez, crew chief], now we’ll change strategy and I’ll follow them. Then I decided we’d wait for Dovi.” Clever. At that time Marquez was third, while Dovizioso was last. From there, he chased Dovizioso down. For just over one minute and 45 seconds, he closed on the Italian’s rear wheel, expertly using the slipstream ahead to shatter Rossi’s year-old lap record by seven tenths of a second. “We played our cards and the strategy was a good one,” he said. “But it was created by them, not by me.” Ducati would deny the existence of any kind of plan. Yet Marquez had still got one over them at their home race.

“That shows that we don’t have the easiest bike on the grid but we are top of the championship.”

Poor Jorge Lorenzo. As if another terrifying, confidence sapping spill that fractured two vertebra wasn’t enough, his team-mate was on hand to slip in a handful of barbs later that day. After the first day of running at Assen Marquez was on hand to remind onlookers “every time he pushes with the Honda, he crashes.” The business of upholding the team and manufacturer’s honour now solely fell on his shoulders and Lorenzo’s six crashes through 2019 demonstrated this year’s RC213V was far from the easiest package on the grid. And the thing is, presented in the bare light of day, we couldn’t really argue with Marquez’s words.

“The guys to beat are Viñales and Quartararo. I think they will be the fastest ones in the second part of the championship.”

Such was the ease of Marquez’s victory at the Sachsenring, it was as if success alone was not enough; his rivals must fail. In what was Ducati’s toughest weekend of the year, the #93 threw continued jabs the way of the Bologna corner. He continued to point out Dovizioso’s struggles in the midst of the Italian’s toughest weekend of 2019. Then the ultimate insult came post-race, when assessing the ten races that remain this year. Ducati soared in the second half of the past two seasons. But here Marquez was waving away their threat and noting how two figures firmly out of the title race are the ones to look out for.