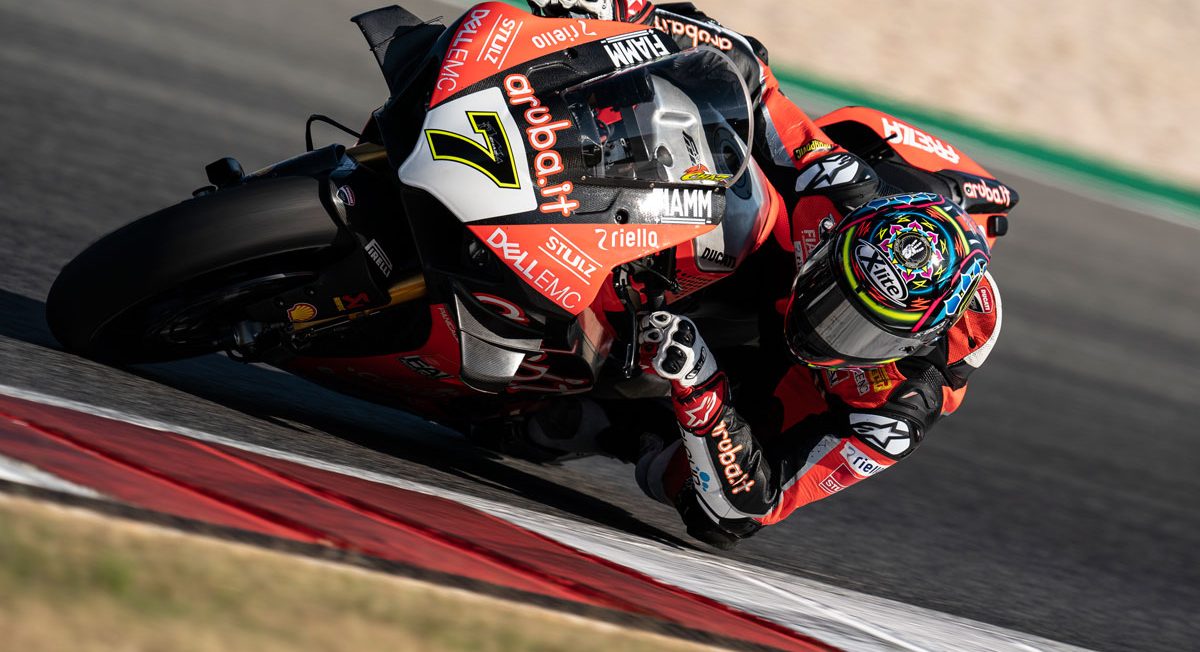 WorldSBK got back to some form of action at the weekend with a two-day test in Portimao. I really do feel the extra long summer break is still one of the most detrimental aspects of the series at the moment but it would seem to be just a reflection of the fact that no one wants to hold a race in late July or August. It was always a tradition under the previous Italian ‘administration’ that most of August was cleared in the calendar as the country all but closes down for the month. However, since Dorna took control the slot in the calendar at the end of July/beginning of August has disappeared.

Some say it is to avoid a clash of dates with the Suzuka 8Hr race but that never caused a problem before and the Bol D’or or Le Mans endurance races often clash with WorldSBK events during the season. I have said it previously that it may be time to look at running the WorldSBK season from September to July, like EWC and have a fuller calendar over the winter months of the northern hemisphere.

What it means at present is that this test, and the race at Portimao, seem like a distinctly separate part of the season. Many of the mechanics and riders had been doing nothing since 14 July. I had to cover the Suzuka 8Hrs race so it was August 3 before I stopped and got to take a holiday with my family. One week by the sea was not enough as it always takes a day or two to properly wind down and then, before you know it, you are heading home.

Last week was a busy one as well as I was working from Monday till Wednesday, in Spain, and then flew home and back out to Faro on Friday. Whilst some of those in the paddock at the weekend were getting back into the swing of things after six weeks, I felt I hadn’t really been away from it.

WorldSBK testing in the middle of the season is always a bit of a strange affair.  Because of the homologation rules for the production bikes there is really nothing new to test. Maybe a new fork or swing arm but other than that it is really more of a Pirelli development test. The sole tyre supplier for the series will bring some tyres with new compounds and/or construction and get each appointed factory team to test them back to back. Otherwise the bikes and the riders are all the same as they were in February. It can seem a bit of a futile exercise photographing the same riders, on the same bikes, at a track where we tested in February, and will race in two weeks time, but if you speak to the riders you will get a different story.

The lack of in-season testing means that days like those can be the only time for the team to do meaningful, consecutive tests on chassis set up and electronic strategies.  The last outing for the teams was back in May in Misano and on both those days it rained, so useful track time was limited. It was something Ten Kate Racing team manager Kervin Bos pointed out when I spoke to him. Having started the season mid way through, this was actually the first time that they had been able to have one full dry day of work, let alone two together. They, and Loris Baz, were really pleased with the information gathered and progress they had made testing the chassis set up, suspension, tyres, electronics and maybe even a new coffee machine, which was the first chance they had had since getting the bikes at the workshop in April/May. It was interesting that Kervin felt coming to Portimao and getting those two days felt that only now they could relax a little and start to focus on results. They genuinely want to see Baz on the podium before the end of the season and feel they are heading in the right direction. Does anyone fancy betting against a French tricolour being hoisted above the podium in Magny Cours?

The interest in the test from those outside the paddock was less than negligible what with sharing the same weekend as the MotoGP race at Silverstone. It was noticeable in that myself and Gordon Ritchie were the only photographer and journalist present.  We were joined by Dorna’s photographer and film crew, GSP Media who were filming for Kawasaki and Ian Wheeler, the Yamaha press officer. At one stage there were more curious tourists in the press office than anyone working.

From a geek point of view I took the chance to do some testing of my own.

When I started photographing motorsport in the mid 1990’s I was using Nikon F4 film cameras and manual focus lenses. This had been the go-to Pro kit for a number of years, but a revolution took place at the end of the 90’s when Canon introduced their EOS system. For the first time there was a viable option for an autofocus camera system that worked at sporting events. It was still a film camera but it was so good that many photographers, including me, swapped from Nikon to Canon.

We then entered the digital era not long after the turn of the century and in 2003 I stopped shooting film at races and only generated digital images. I was fortunate that Canon, along with Kodak, had developed the best digital system so there was no need to swap too much of my kit, just a couple of new camera bodies. Things stayed pretty much the same for seven or eight years until the introduction of the full frame sensor.  Before, the image sensor on the camera was smaller than the traditional 35mm size and as a result the images were magnified. It meant that a 600mm lens actually had a focal length of around 800mm. With ‘full’ frame 35mm sensors, Nikon jumped ahead. They completely redesigned their Autofocus system and the D3 and D4 bodies were the best on the market.  I was at a point where my kit needed replaced and so I swapped again, back to Nikon.

Now we are in the throws of another revolution: mirrorless cameras. These have no traditional shutter in the camera just an image sensor that sees through the lens all the time. It is technology derived from video cameras and allows the body itself to be smaller and lighter as it removes most of the moving parts.  It’s noticeable that the revolution has been driven by electronics companies such as Sony and Panasonic, and former film manufacturer Fuji. The traditional camera companies of Nikon and Canon have been late to the party. There are a few motorsport photographers who are now using, and singing the praises, of the Sony system. I have a couple of Fuji cameras and this time last year I tried out their pro kit at the corresponding WorldSBK test in Portimao. My conclusion was that it wasn’t up to the job and I have stuck with my Nikon kit since.

This weekend however I had the chance to try the Sony. It took half an hour or so to get used to the ergonomics and the various electronic systems on the camera but after I had worked it out I shot away quiet happily and have to be fair and say that I was really impressed. I didn’t use the Nikon kit at all and produced all the shots that I wanted to and to the standard that I would expect. I am not sure I am just ready to get rid of all my Nikon gear and jump ship but the mirrorless digital revolution is clearly knocking down the barricades of traditional photography and when the time comes to renew my cameras this will be a truly viable option. So a two day ‘test’ ends up being valuable after all.