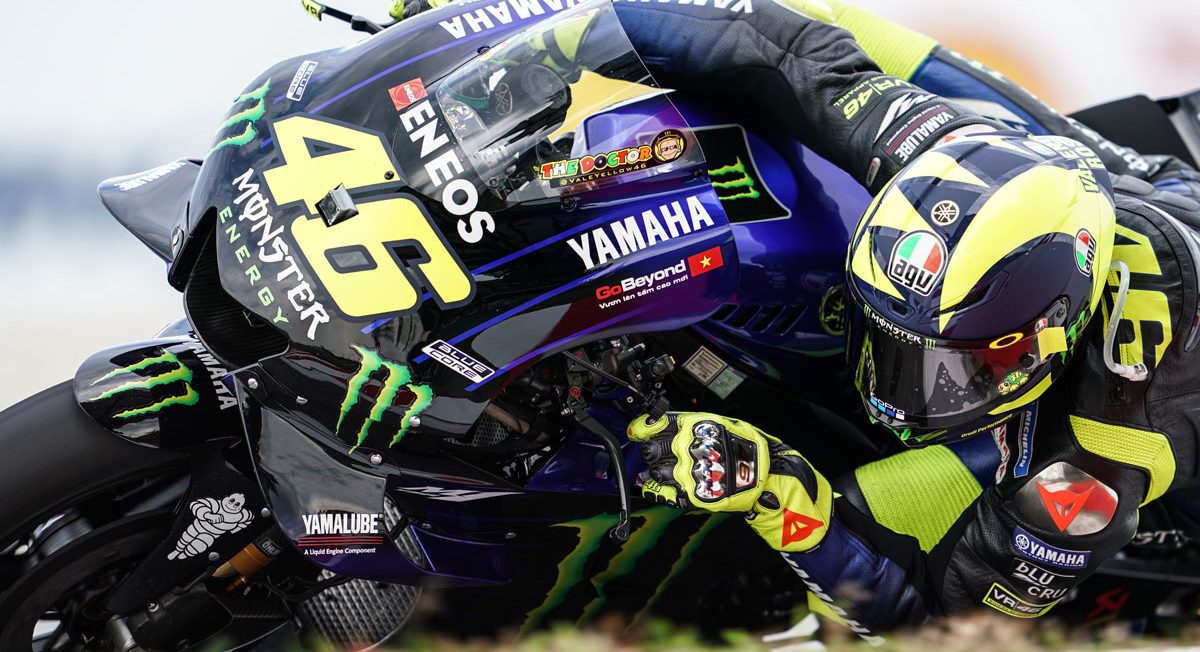 A last roll of the dice?

November. As end-of-season lists and articles draw nearer, it’s time to cast an eye over the year as a whole. This has felt like one of transition, as members of the old guard faded in the face of the blisteringly fast new school.

At one end, Fabio Quartararo’s explosive arrival as a premier class force caught everyone off guard; now him and young guns Maverick Viñales and Alex Rins can be counted upon as the figures most likely to challenge Marc Marquez in years to come. At the other come two of the sport’s greats. And not just in modern times. Observing the protracted pain of Jorge Lorenzo has been a difficult watch for anyone with a fully functioning pulse. His repeated aims of finishing a set number of seconds behind the race winner have been utterly unbefitting a man of his motorcycling capability.

And then there is the Majorcan’s former team-mate. Once the figure that cast the greatest shadow over the #99, Valentino Rossi’s season has been equally jarring. The numbers certainly tell a story of 2019 being the great Italian’s worst since those dark days at Ducati. Although a far from desperate 7th in this year’s championship, the colossus of the sport has managed just two podium finishes across 18 rounds. His podium drought of 15 races is his worst since 2011-’12. He now hasn’t won any of his past 45 outings. Historically, it’s never been this bad.

Perhaps more damning than the numbers has been the depths to which Rossi has sunk at times this year. When it’s been bad, it’s been awful. Performances at Mugello, Assen and Motegi – two of which have always been among his ‘bankers’ – were nothing short of desperate as he crashed out of 21st place in Italy and 11th in Holland and Japan. They must surely rank amongst the worst weekends in an expansive and record-setting 24-year career.

Further evidence has regularly been provided by Viñales and Quartararo, the two figures that have pushed Marquez hardest in the season’s second half. No longer can we excuse Rossi on the grounds of mechanical inferiority. Recent evidence at Misano, the Chang International Circuit, Motegi, Phillip Island and Sepang point to Yamaha finally getting their act together. It’d be hard to argue against the M1 now being the grid’s most balanced package.

So, at 40 years old, could Rossi’s time as a major force really be up?

The winner of 115 grand prix and 9 world titles certainly doesn’t think so. If he did, he wouldn’t have left the idea of renewing his contract beyond 2020 open until the end of pre-season. He wouldn’t have decided on a crew chief change for the second time in a premier class career that has elevated him beyond the greatest there ever was. And he wouldn’t be working tirelessly on evolving his riding style again at the beginning of his fifth decade. But will that be enough?

This year Rossi’s results have been beset by an inability to make the rear tyre last over race distance, with rear traction a continual bugbear. Yamaha’s well-documented top speed disadvantage certainly hasn’t helped. The M1 has regularly been the slowest bike in a straight line in 2019. The Italian’s height and weight (181cm and 69kg) put him at a disadvantage even to Quartararo (177cm and 66kg) and Viñales (171cm and 64kg).

Still, height and weight surely can’t explain Rossi’s 11-second deficit to the top Yamaha at Misano. Nor the 17-second one at Aragon. Or even the 18-seconds in Thailand. Curiously, the extent of his issues still remains something of a mystery. “The way he opens the throttle, how he picks the bike up,” said Monster Energy Yamaha team boss Massimo Meregalli. “For sure with his height he has a different weight transfer [than Viñales and Quartararo]. It’s an aspect that could be easy to understand. But it isn’t.”

To give him his dues, Rossi is entirely aware of the situation. At Silverstone he admitted a lousy run of results had left him feeling “very sad.” Such emotions impact motivation and belief as he approached – then surpassed – his 400th grand prix start. “At this point in my career, you need to come to the races to have fun,” he told reporters in late August. “If you don’t it can be tough to deal with.” For a man raised on nothing but serial success, even his recent fourth place at Sepang won’t suffice.

Something had to give. Hence why the news that he would part ways with Silvano Galbusera, crew chief for six years, was not entirely surprising. But the revelation that his successor at Valencia will be David Muñoz, currently working with Nicolo Bulega in Sky Racing VR46’s Moto2 outfit, certainly was. Rossi cited Muñoz’s work with VR46 Academy member Pecco Bagnaia during his title year in Moto2 as key.

At least he’s willing to try something. “I prefer to live without regrets,” he explained in Thailand. “Someone in my place might have thought, ‘OK, it’s 2020, my last season’ and maybe everything would’ve been comfortable leaving everything the same. [But] I thought, ‘F**k, let’s try it.’”

From a private conversation with one of Muñoz’s experienced former colleagues, real surprise was expressed at the appointment. By all accounts, he is a quiet, measured figure that instils a degree of calm to a box, a vital component in modern day MotoGP, when each free practice can feature a pulsating, yet draining, dash for a place in the top ten. Bagnaia backs this up: “I won the championship last year thanks to him. In the last races I was so nervous and he kept me calm,” he revealed. “He deserves this chance to work with Vale.”

But, according to this one source, Muñoz’s technical ability was not something that stood out. Sure, he has experience working with top riders. He was Lorenzo’s crew chief during those early days with Derbi in 125s. More recently he spent several years as a crew chief in Sito Pons’ Moto2 team, working alongside Viñales and Rins. He then switched to Sky Racing in 2017. Experience at the top level, yes. But not at the very top. And overturning a year of drift for the class’ eldest statesman is a tall order, no matter his expertise.

But Yamaha doesn’t see a problem with his lack of MotoGP experience. “He [will have] a Japanese ghost, let’s say,” said Meregalli of the system in place that will get Muñoz up to speed. “The group of people working with him will share a lot of information before taking a decision. That will help him, especially at the beginning, with the fact that he doesn’t have much experience in MotoGP. But I saw this already with Esteban [Garcia, Viñales’ crew chief as of this year]. OK, he had experience in MotoGP, but not with Yamaha. For me the organisation that Yamaha has in this aspect is really good. Then for sure he has his own way to work in the garage.” Meregalli also feels it’s an opportunity to inject fresh motivation. “For sure [Valentino] will also use this change to do another step,” he said.

It doesn’t end there. In light of Quartararo’s magnificent speed and ability to get the best out of the Yamaha, Rossi’s spent the second half of this year learning new tricks aboard the M1. He believes the rookie gains on corner entry: “[Fabio] is very smooth and I think he’s very strong in braking because he is able to stop the bike very well,” he said in Thailand.

Thus a thumb-operated rear brake was introduced in Austria and used ever since. At Motegi he began playing with his braking technique, using two fingers – like Viñales – on the front lever rather than his preferred three. And while a Brembo technician confirmed there is minimal difference when viewing Rossi’s data, it does show he isn’t simply sitting back and accepting his fate.

“Now he’s trying to change the way he used to ride after so many years,” Meregalli revealed in Malaysia. “He never gives up. Before Japan he went to Misano to start braking differently, and opening the throttle in a different way than before. For sure we have to respect him a lot. He achieved what he achieved but he’s always trying to improve himself. At Phillip Island already something changed. The problem he faces a lot is that he couldn’t pull away [because] of the top speed.”

There have been recent rays of light. Rossi did lead the first three laps of the Australian Grand Prix before fading to eighth as rear grip and – you guessed it – top speed let him down. OK, he was outperformed by his team-mate again in Malaysia. But he posted the race’s fastest lap for the first time in 43 months in a strong showing. “This time for the tyre life we work well and I was strong to the last lap,” he noted on Sunday evening.

Who’s to say he can’t reverse it all? I’ve made the mistake of writing him off in the past, only to be proved emphatically wrong. But held next to Viñales and Quartararo’s speed, the extent of his struggles this year give me the impression this might be a different case. Realistically, how much longer can a rider in his early 40s compete against and beat rivals that are literally half his age?

One thing’s for sure; time isn’t on his side. But haven’t we been saying this about him for the best part of the last decade? Prior to this year he was one of life’s true exceptions to the rule that time waits for no man. And for this alone, perhaps we should all reserve judgment until the personnel and riding style changes take full effect.

Rossi does, after all, deserve that much.