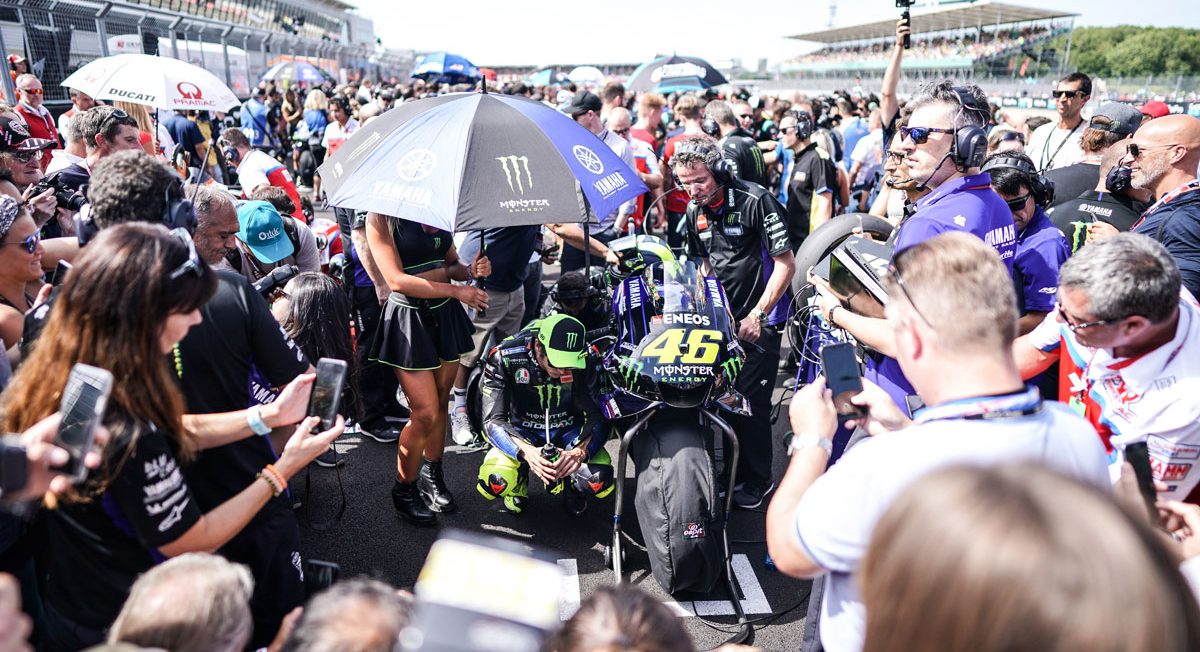 Wash the yellow t-shirts, dust off ‘The Doctor’ paraphernalia, fire up the klaxons; ready yourself for what may be the greatest farewell tour of them all. Among the many stories vying for airtime ahead of the resumption of hostilities in February, the issue of whether 2020 will mark the end point of Valentino Rossi’s illustrious grand prix career still looms.

Winter testing always carries great importance. But the six days of track time between 7th and 24th of February may be among the most crucial tests of the venerable Italian’s recent career. For it will be during the laps in Malaysia and Qatar when the crux of Rossi’s – and Yamaha’s – decision to prolong a stint at the pinnacle of the sport that his fame and allure has often transcended is bound to be made.

Don’t be fooled by claims he may well wait until Mugello to assess his suitability for another one or two-year contract. The current market won’t afford him that amount of time. Team boss Massimo Meregalli has said discussions will continue throughout the preseason to see his rider’s preference. “We always talk [about that]” he said last November.

There have been several occasions recently when Rossi made it loud and clear 2020 represents something of a final shot. Entrusting MotoGP rookie David Muñoz to reverse his fortunes in his new role as crew chief raised many eyebrows, mainly due to the Spaniard’s lack of elite-level experience. But the rider – soon to be 41 years old – admitted this amounted to a final rolling of the dice.

There have been several occasions recently when Rossi made it loud and clear 2020 represents something of a final shot. Entrusting MotoGP rookie David Muñoz to reverse his fortunes in his new role as crew chief raised many eyebrows, mainly due to the Spaniard’s lack of elite-level experience. But the rider – soon to be 41 years old – admitted this amounted to a final rolling of the dice.

“I prefer to live without regrets,” he explained last October. “Someone in my place might have thought, ‘OK, it’s 2020, my last season’ and maybe everything would’ve been comfortable leaving everything the same. [But] I thought, ‘Fuck, let’s try it.’”

And early impressions have been good. The nine-time world champion talked up the impact of the change in November at tests at Valencia and Jerez. “[David] needs to study, he needs to check the data, to understand the way that this bike works,” he said at Valencia. “But the first impression is positive, I feel good, we did already some small modify and at the end of the day I was better than at the beginning.”

Yamaha appears a happy place once more, as communication between factory and racing outfit has improved greatly. Rider complaints are not only listened to but swiftly addressed. And last season’s test at Misano saw them do what had been lacking for each of the three previous years: bring a selection of innovative new parts to try.

But for Rossi will this be enough? Despite those good early impressions, times at the two tests (tenth at Valencia, eleventh at Jerez) have still been some way off the top. That team-mate Maverick Viñales has been fastest on both occasions with new talent Fabio Quartararo close behind won’t be lost on the Italian.

Nor will Tuesday’s news that Viñales has become the first rider to renew for 2021. As he stepped up from August to become a regular thorn in Marc Marquez’s side, Rossi consistently lagged some way behind. The same can be said of him and Quartararo, the sport’s most explosive young talent to come along in six years. Will Yamaha really allow the Frenchman – still only 20 years old – to slip through its grasp? With Viñales signed up, Quartararo is second only to Marquez as MotoGP’s most in-demand man.

The idea of switching places with the Frenchman, based in the Petronas SRT Yamaha outfit, has been considered. Rossi even admitted as much when speaking to the Gazzetta Dello Sport’s Paolo Ianieri at the end of last year. “I don’t see all that much difference in going to Petronas. I would prefer to stay where I am, but we are three riders for two places, so you have to think of a third [place],” he said. “And for me, even if it’s at Petronas, it doesn’t seem like such a bad team.”

But can we really envision the sport’s biggest draw stepping down to a satellite team and away from the outfit that brought him four of his seven premier class crowns? In my eyes, it’s unlikely in the extreme. He spoke of his “sadness” last August at the lack of results coming his way. A place on the grid doesn’t fuel his motivation; fighting at the front and challenging for wins do.

And his appearance at Abu Dhabi’s Gulf of 12 Hours event last December – held for sports car prototypes – offered a glimpse that competition is still an option when the curtains come down on the most illustrious MotoGP career of them all. “When I give up bikes, I’d like to race in Endurance [car racing] – the Le Mans 24 Hours, the Spa 24 Hours and the 24 Hours of Nurburgring,” he told Sky Italia. “Let’s say there are five races in the calendar that I’d like to take part in.”

Should he walk away, where does that leave MotoGP? It’s a prospect that fills us all with trepidation. Yes, the sport is in a fine bill of health with full grandstands, great racing and an expanding calendar evidence of this. There has been no notable decline in audiences in the past year in spite of Rossi’s struggles.

But he remains the sport’s leading name, known to nearly everyone with an interest in bikes or otherwise. The news that one well-known quarterly publication that is no longer in existence saw sales decrease dramatically on the occasion it didn’t adorn its front page with the #46 is an example of how the sport will be a good deal less marketable in the great man’s absence.

The effect of this possibility remains a great unknown. But one thing is for sure: Rossi’s retirement from MotoGP currently seems closer than it’s ever been.