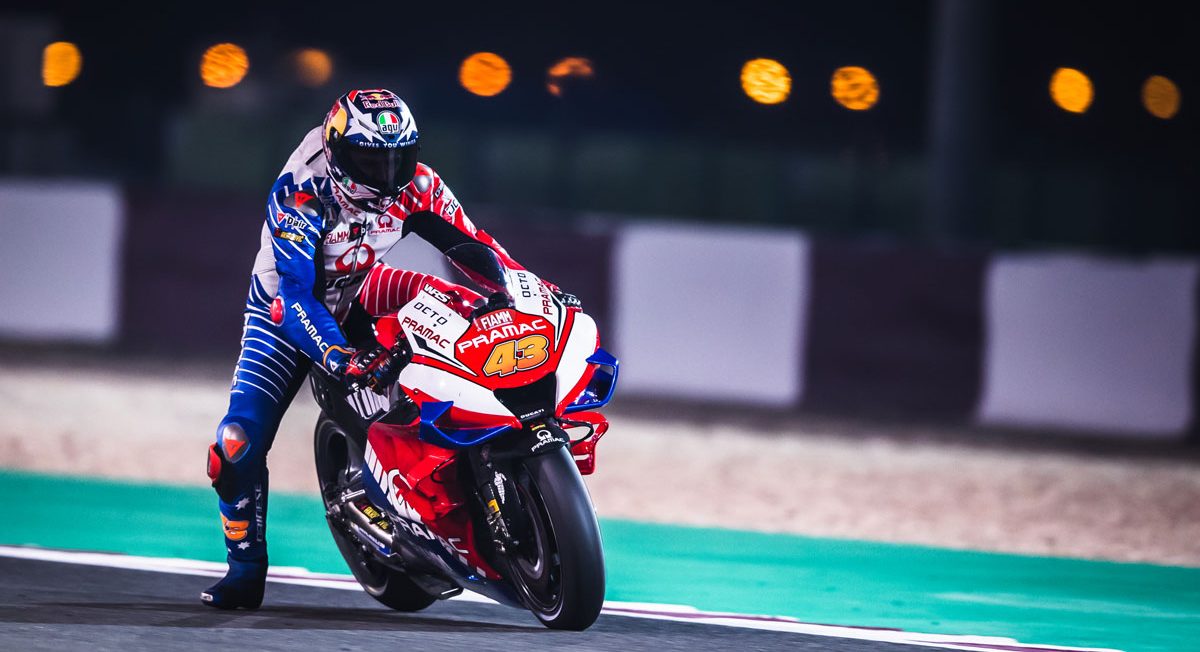 Miller On The Move

Well Danilo. Thanks for the win. Your brevity was nice while it lasted. Enjoy this year but don’t let the door hit you on the way out in November… Motorcycle racing has always been a cut-throat world, a facet of which Danilo Petrucci was only too aware even before eyeing the recent news cycle, in which both his current (and former) boss talked up the chances of a certain Australian stepping up and into his team.

Francesco Guidotti, currently managing Jack Miller in the Pramac Ducati Team, confirmed his rider is in advanced negotiations with the factory to follow in the footsteps of countrymen Troy Bayliss and Casey Stoner by representing the factory team at MotoGP level. “From both parties there is an intention to do the deal,” Guidotti told motogp.com. “I think it’s close.”

With Ducati and Miller expected to reach an agreement soon (even factory team boss Davide Tardozzi recently told BT Sport, “We’re very close to making a decision”), it poses the question of who will sit opposite him? KTM appeared a realistic option for Andrea Dovizioso for a MotoGP swansong. But Pit Beirer’s recent assertion to Crash.net’s Pete McLaren that its “four riders will get a proposal for next year … our priority is to keep the team exactly like it is,” pours a certain amount of cold water on that possibility. Petrucci will more than likely get the chop despite having just a single season with a factory behind him.

Is this a solid move? As it will more than likely be confirmed before the lights go out at race one in July, there is a certain degree of risk. Miller’s preseason was strong and consistent, even in light of the sizeable testing duties that come with being Pramac’s lead rider. But whether he can kick on from a strong second half of 2019, when he was regularly sparring with Dovizioso, remains to be seen.

But clearly Ducati management has seen enough to trust in his ability. Viewed as a whole, Miller’s 2019 was impressive, a considerable step up from his four previous MotoGP campaigns. There was the occasional hiccup and disappointment, a few expected podium challenges that faded without explanation. Overall the Aussie has established himself as one of six or seven leading contenders.

Miller totted up 95 points in the season’s final ten races, a number that would have been considerably higher had he not crashed in Austria while third or hit the kill switch on the grid in Thailand when sixth. Crucially he scored 40 more points than Petrucci in that time, helped by stirring podiums at Brno, Aragon, Phillip Island and Valencia (each one more impressive than the last). And his final points haul of 165 was a marked improvement on any of the four previous years, when his previous highest was 91. There’s no doubt he’s getting there.

It seems like he’s been around forever, but Miller – four years Petrucci’s junior – only turned 25 this January. Should he continue in the same vein of late, you’d be inclined to think he has at least another five or six years scrapping at the front of the class. In him, Ducati has a regular podium threat (if not more) for that time.

A quick look at the 2021 line up of Ducati’s main rivals and youth is very much in vogue. Honda (if they continue with Alex Marquez, will boast an average age of 26 in its factory team), Yamaha (an average age of 23) and Suzuki (24) will back up an established contender with an up-and-comer, be it Marquez junior, Fabio Quartararo or Joan Mir. The next contract he signs will surely be 34-year old Dovizioso’s last. Miller is a chance to inject youth and fresh energy into its project.

True, he can no longer be seen as one of the class’ younger lights. But this was reflected in a more mature temperament last year. Not every rider would have maintained their composure as well as he did in the wake of ‘Spielberg-gate’, when Ducati’s infamous plot to re-sign Jorge Lorenzo in his place came out and into the open. The Australian handled himself with dignity, his results getting better from there. And not just that; many would have understood if Miller had taken KTM up that weekend on its eye-watering offer to replace Johann Zarco at the end of 2019.

“In this paddock if you get butt hurt from everything that goes on like that you’re not going to be here very long,” he told us in England, one race later. “I am more of a sweep it under the rug kind of guy. Push the shit under the rug and leave it there.” He put emotion aside and recognised his best chance of upping his level to race winner was to stay put, even if that meant continuing to work alongside a figure (*cough Gigi Dall’Igna cough*) who was secretly plotting his exit over the summer break. A 22-year old Miller wouldn’t have handled the matter with such assurance.

Greater experience and added maturity is notable inside the garage, too. “He’s arriving,” said Miller’s crew chief Cristian Pupulin last October. “He’s learning new things every race. He’s improving his behaviour during the race. He’s using more his mind more than his talent. That is important. OK, he’s not 100 percent consistent but he’s young and he can improve that last step that he needs to do.

“[2018] was quite different. He was trusting 100 percent in his talent and not working so much in other areas. In MotoGP in these years you have to manage the tyres, to not ruin them in the first laps, the first part of the race to be patient and calm to have something more at the end.”

Only in exceptional cases do riders reach MotoGP and have the whole deal – riding style, working method, training regime – worked out from the get-go. Miller has certainly come a long way from the beginning of his rookie campaign five years ago when he arrived at the Sepang tests podgy and nearly unrecognisable from the previous year. Since then he’s relocated to Andorra, made incremental gains and found a level of stability and intensity in his preparation that had been missing before.

Personal manager Aki Ajo recently told motogp.com’s ‘Off The Racing Line’ series, “I’ve not seen many people in my life that have changed their lifestyle so much just because they want to do well in their job and win races in the future. Year by year we see that he’s more ready.” Has Petrucci had a fair crack at the whip? Probably not. But the truth of the matter is factory teams rarely accept form-slumps that last for ten races. And when has the world of MotoGP ever been forgiving or fair? Miller, meanwhile, has put forward a strong case for his own hiring over the past twelve months. And with Honda, Yamaha and Suzuki recently tying up their most valuable assets on lengthy deals, the Australian represents the Bologna factory’s brightest hope in the long-term. No one can say he hasn’t earned it.