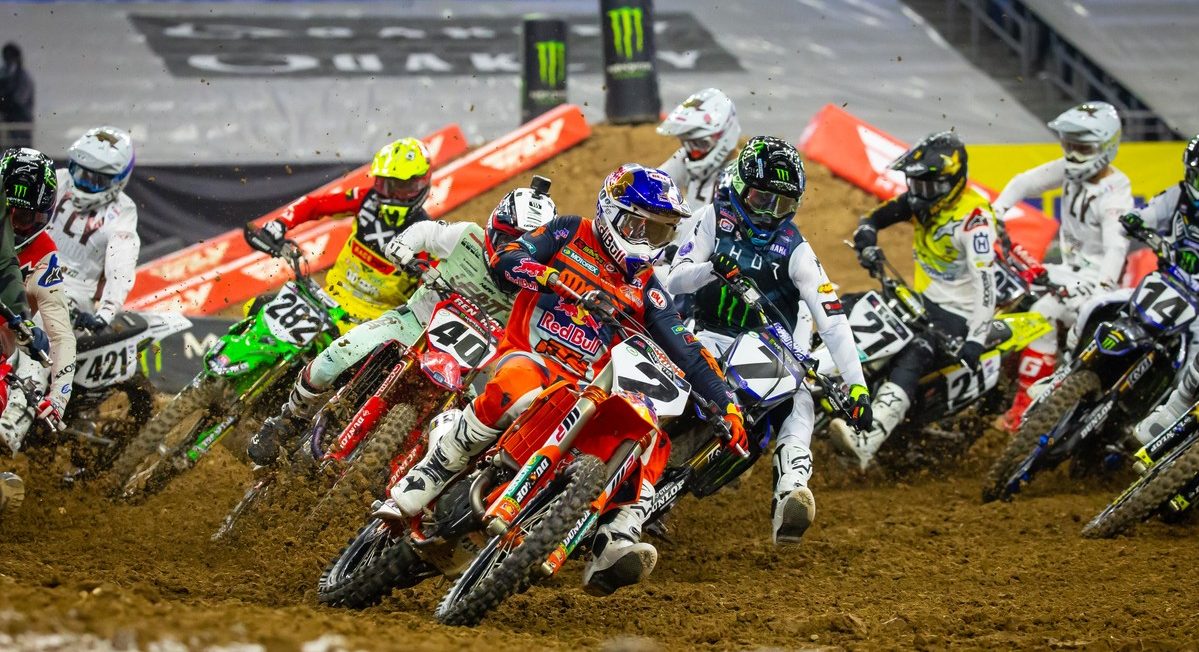 Usually, the lead-up to the Monster Energy Supercross Series’ opening round is a week-long festival filled with product launches, the occasional cocktail party, and plenty of time catching up with friends in the industry. If you’re lucky, you’ll score a one-on-one interview with a title contender. If all else fails, you can try to make something from the generic quotes about preseason prep repeated in the press conference. Getting all of the content posted online by Saturday morning is a ‘must’ because once bikes roll onto the track for the first round of practice, it’s all considered old news. The work continues long after the race is over, and the early hours of Sunday morning are spent typing blow-by-blow reports of the action or sorting through thousands of photos shot to find a dozen or so that best illustrate the story. It’s an intoxicating, exhausting time.

And it was greatly missed in 2021. That’s not to say that the run-up to the opening day was disappointing or that the workload was less. It was just different. There is no avoiding the ongoing global pandemic, even in the wild west of Texas or with what might be the best season ever, and it’s something that must be kept in mind as the series drives forward.

Feld Entertainment replaced the usual Friday media event with a pair of press conferences held via Zoom; the digital surroundings allowed riders to be more outgoing than they often are when placed on stage at the Diamond Club in Angel Stadium. With no large gatherings allowed, brands pushed out their latest product lines with promo videos through social media and avoided a pricy bar tab.

NGR Stadium was a busy place, too. As teams took care of the final touches to the freshly built bikes and organized the rigs for the months on the road in one parking lot, others in the complex were turned into temporary testing and vaccination facilities, with one for the city residents and another for SX credential holders.

During the agonizing 10-minute wait for the mandatory rapid test results on Thursday, I thought about how riders always talk about their intent to make it to the first round without issue and how a crash during the last day of practice could wipe away months of work or thousands of dollars spent. Fortunately, we got to the first round with almost everyone intact, but these next few weeks will be a real test for the participants because now they’ll have to be mindful of something that’s just as serious. A positive test result in a functional group could lead to a seven-day isolation period. That would be disastrous to a rider or team, especially during the back-to-back-to-back rounds in different cities.

I can log a few miles just walking to, from, and through the pit area at Angel Stadium, as the long breaks between practice sessions are a great time to graze the food carts at the hospitality trucks or get the scoop directly from the riders. That social time is one of my favorite things about the opening round, but with no interaction permitted and most team rigs bundled up due to cool temps and steady wind, I didn’t even walk to the paddock at Houston One.

It wasn’t just me who sensed the vibe was off. During socially distant conversations with riders, mechanics, event personnel, and friends watching from home, all of us agreed that it was great to be back at a stadium with fans in the stands and that it wasn’t anything like an opening round of Supercross or the seven Salt Lake City races last spring. A few riders admitted they had difficulty getting in the zone for the afternoon practice sessions, only to have nerves creep in when they lined up for the night’s race.

Things seemed a little more ordinary during opening ceremonies, but as music boomed through the speakers and afternoon light shone through the frosted roof, the pre-race buzz felt more like round 15 in a very tiring season than it did Anaheim One. Sure, it was a different high than I had anticipated, but after being without it for nearly a year, it was a satisfying hit.

Finally, the gates dropped, and for a while, all was right in the world. The on-track action was outstanding, with a field of highly talented riders that kept every race exciting from start to finish and make predicting what will happen an almost-impossible task. Christian Craig, Austin Forkner, and Colt Nichols claimed the top spots in the 250 Main Event, finishes that were special in different ways for all three riders. For Craig, it was a breakthrough victory following five years of FIM suspensions and injuries. For Forkner, a return to action after losing his spleen and a possible 250 SX title in a crash last year. For Nichols, it was a reminder that he’s a top talent worthy of a ride. Justin Barcia and Ken Roczen made sure the 450 Main Event was just as spectacular with a back-and-forth bout for the win that went down to the last lap, while Marvin Musquin scored an impressive third-place finish in his first Supercross race since 2019.

A ‘new normal’. After hearing that phrase for nearly a year, we definitely have an accurate example of it.