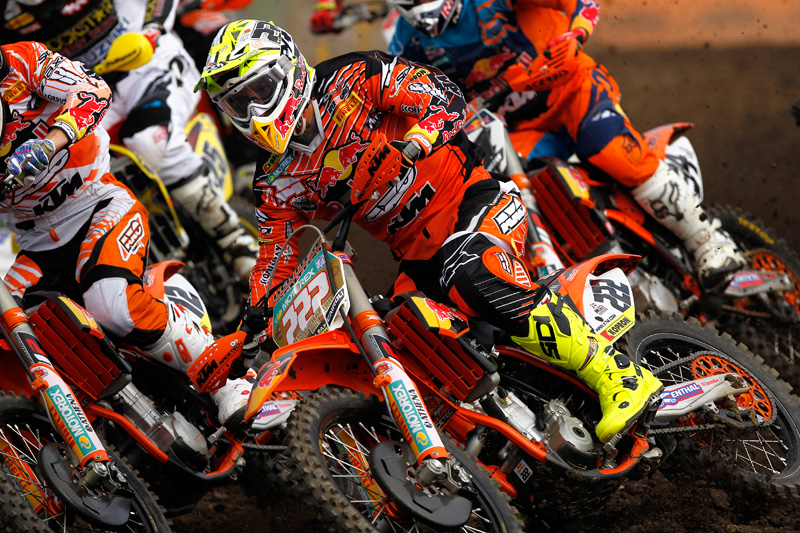 Rights holders and promoters of the series, Youthstream, have apparently communicated to teams that for 2013 the fly-away Grand Prix events (Qatar, Thailand, Mexico and Brazil) could entertain a race programme that will see the MX1 and MX2 classes mixed together. Instead of four motos in total (two per category) both will merge and score points relevant to their championship contest (and MX1 and MX2 podiums would presumably follow). It is rumoured that the format experiment will be trialled at the overseas rounds with a view towards applying it to the full series from 2014 with one moto per class and then a superfinal with both, conjuring a three-race programme.

It means the core of the FIM World Championship would essentially reduce to a three moto schedule, but with the vast majority of the Grands Prix also hosting European 250, 125 and 150 events there will not be a lack of action on the track. The paddock struggled to field twenty riders for the flyaways in 2012 so it is likely that a forty-rider gate for this new ‘Superfinal’ will be full, with still space for (fewer and safer) local entries. The switch also allows the likes of MX2 World Champion Jeffrey Herlings the chance to race against Tony Cairoli and co each week and makes the entire heart of the Grand Prix more TV friendly.

There are allegedly also some other alterations being talked about including minor amendments to the rules regarding the average speed permitted by circuits and the possible abolishment of the dreaded green fencing – long a scourge of rear wheels – that was already a contentious subject towards the end of the 2012 campaign.