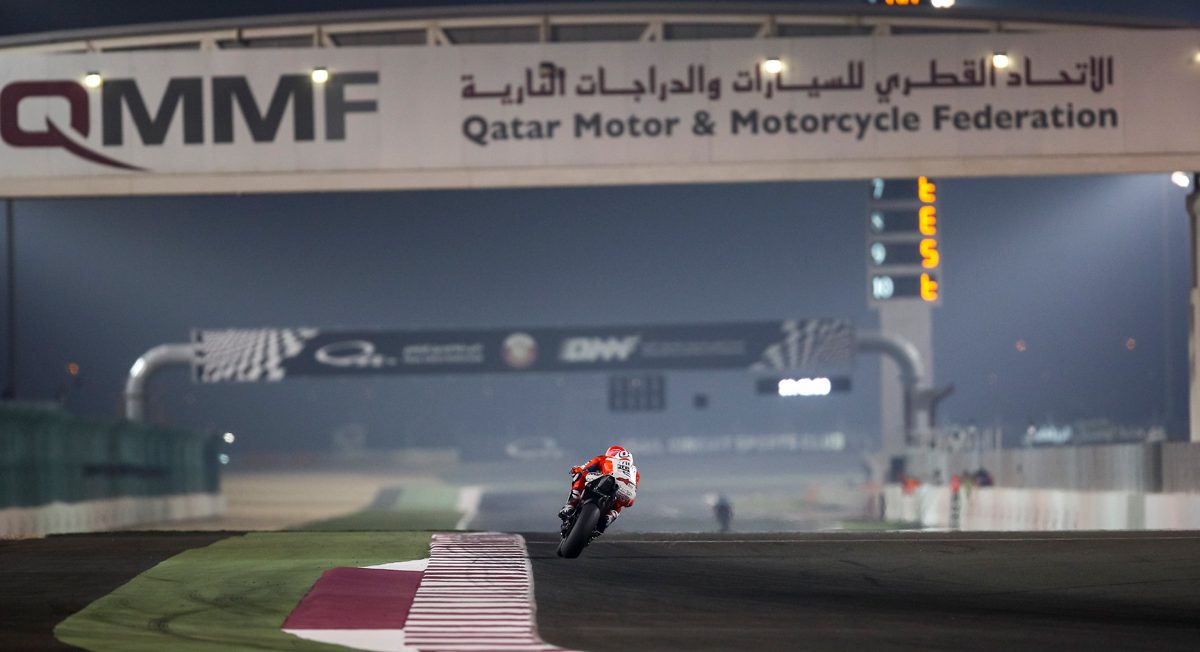 Now that testing is completed, what better time to take stock of how each of MotoGP’s six manufacturers is placed ahead of what promises to be another eventful season…

What to say of the bike that has topped each of the four official tests? If new signing Maverick Viñales’ pace is anything to go by, Yamaha is in fine fettle going into the year ahead, and appears to be the class’ most complete package. It was felt by factory engineers that the M1 had lost some of the DNA that was so critical to past successes in the second half of 2016; the renowned handling and turning ability that works so well through fast, flowing corners was not as notable. And also stunted progress with Magneti Marelli’s electronics software. However much work went into prolonging tyre life over the winter months with two different chassis the only component still under consideration going into the final test. Viñales has lauded the braking ability of the ’17 M1 and its smooth power delivery. Valentino Rossi has yet to find an optimum setting but expect both riders to be in the championship mix.

No matter the situation, the thought remains: If Marquez could win the 2016 title in spite of HRC’s woes with the spec Magneti Marelli electronics software, among other things, what can he do on a fully functioning bike? There is little doubting the improvement of HRC’s new ‘big-bang’ style engine. Power delivery in the lower revs is smoother and the machine appears to be easier to ride. Marc Marquez’s consistency at the Valencia, Sepang and Phillip Island tests was remarkable, and although the bike is still lacking in acceleration – a big disadvantage over the past two years – Honda’s two factory riders appear well poised. The performances of Cal Crutchlow and Jack Miller have also shown the 2017 RC213V to have serious potential, and Marquez will begin the year as a championship favourite.

So this is it. Ducati finally has its man. And with Jorge Lorenzo’s arrival comes heightened expectations. Were they not already high upon arriving, at the close of testing in Sepang, the five-time world champion declared that the bike was ready to, at the very least, win races. Yet not even a reported twelve million Euro salary is enough to guarantee the MotoGP rider’s championship, the title Ducati boss Gigi Dall’Igna craves the most. From riders’ comments, the GP17 has improved in most areas when compared to its predecessor, the Desmosedici GP. Top speed and strength under heavy braking remain its great strengths. But second rider Andrea Dovizioso could not hide his frustration at the second test in Australia, having found that age-old problem of turning the bike was still present. By the final test, he could laugh about it. “It’s been four years [with the same problem] so I’ve already accepted it,” he joked. Lorenzo has often cut a figure of frustration in the Ducati garage, while getting to grips with the different internal practices of an Italian team. Few would doubt the bike’s ability at high speed tracks, or ones which that require plenty of braking. But Jerez? Barcelona? Layouts notoriously low on grip could once again be Ducati’s Achilles’ heel. Hopes of a title challenge may have to wait one more year.

The shadow of Viñales still looms large over Suzuki’s MotoGP project. At times the Spaniard ‘carried’ the third of the Japanese factories in 2016, and it appears his fairly unique style of braking and turning is difficult to replicate, as new signing Andrea Iannone has found. “I have a very high corner speed, sometimes more than Maverick with the Suzuki,” explained Iannone at the final test. “The difference is on the first part of the corner in the braking point. My style is braking; and with the brake I go in at an angle. Maverick braked straight and, at the last moment, completely put the bike down very fast.” Finding a compromise has proved difficult but a radical set-up change on the final night had Iannone heading back to Europe in a positive frame of mind. Aleix Espargaro joined Viñales in challenging for podiums at the tail end of last year and this was enough to convince Suzuki that only small refinements to its GSX-RR were needed for the new season. A modified chassis, engine with greater top end and improved electronics ensure it is still a capable package. On the whole, Iannone has been consistent, but he has fallen a lot while attempting to brake as he did in the past. Alex Rins could surprise many once he has gained suitable experience.

For a machine that was only rolled out in February, 2016, Aprilia’s surge toward the top ten in the autumn months was worthy of praise. Chipping away to close the gap on the front six was always going to be a big ask, but in Aleix Espargaro’s hands it appears they have done just that. So much so that race boss Romano Albesiano has set his sights on landing a top five finish before the end of the year. A new chassis that moved the bike’s centre of gravity has been a factor, giving both riders a fantastic feeling with the front tyre and allowing them to brake late. As has readjusting the electronics. “I release a lot the anti-wheelie, the traction control and I give a lot more power to the bike,” explained Espargaro. “Obviously it’s not easy to manage now. We lost a little bit of rear stability. But we gain top speed.” Consistency on worn tyres has been a real bonus too. Sam Lowes, the factory’s second new signing, has benefited from a patient approach. The Englishman spent the first three tests on the ’16 machine, learning the demands of a MotoGP machine. 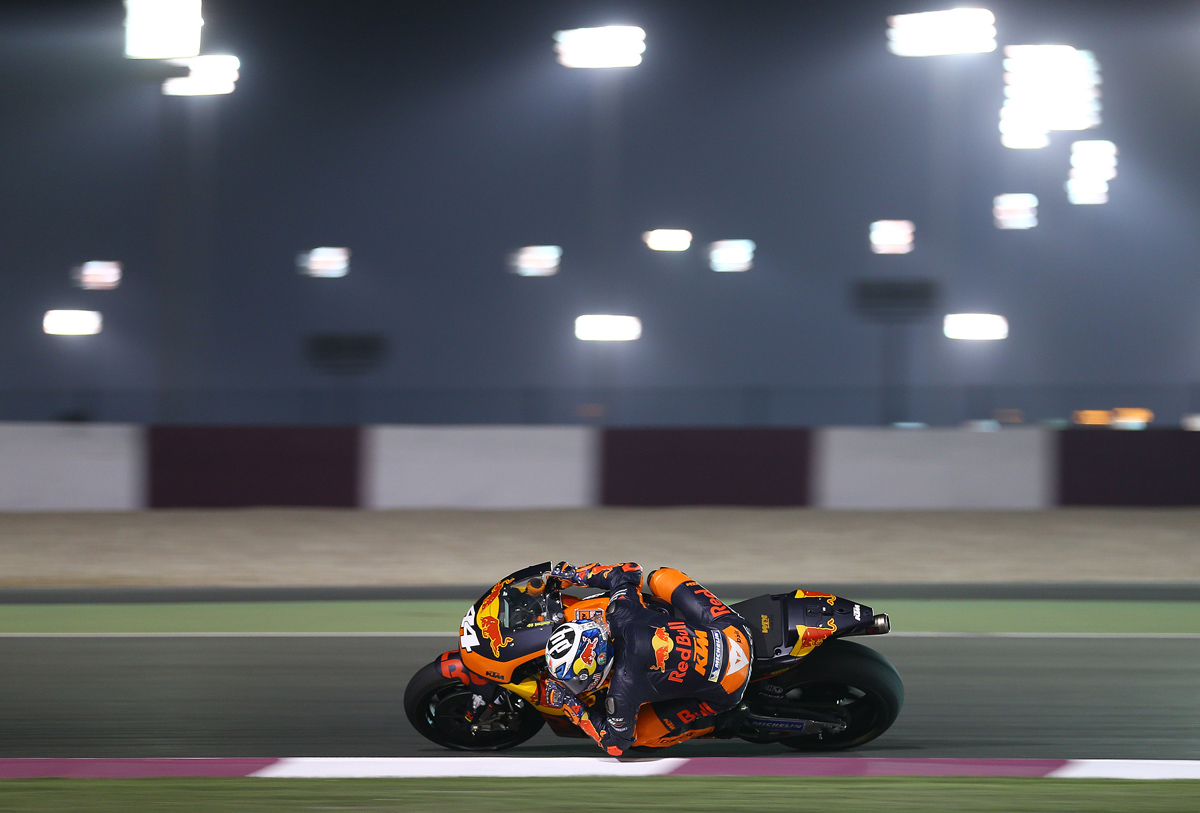 Photo by Gold and Goose

If one was to request a plan that outlines successful entry of a factory new to MotoGP and getting a new bike up to speed, it appears KTM has the blueprint. Having gained the backing of Red Bull’s millions, the Austrian factory quickly went about handpicking expertise from a number of the top teams. The final race weekend of 2016 showed the RC16 wasn’t a million miles off. Riders Pol Espargaro and Bradley Smith have largely focussed on adapting the bike’s electronics to each track. Both riders have also worked through five chassis through preseason, with the final two a definite improvement on the last. The ‘screamer’ engine remains a work in progress. An update brought to the Qatar test didn’t bring about improvements both riders had hoped for, with rear traction the bike’s weak point. Slow getting up to speed at each of the three tests, both riders have been competitive by the end, with Pol Espargaro’s performance at Phillip Island particularly noteworthy. Scoring points early in the season isn’t a unrealistic aim.

Principal photo by Gold and Goose