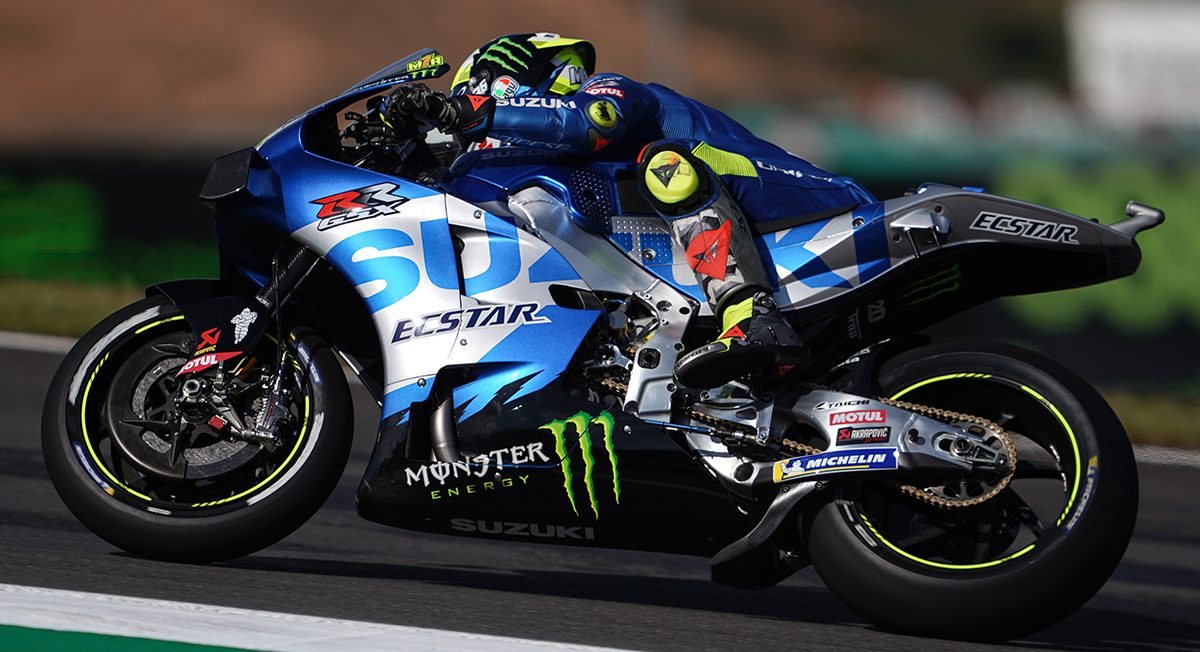 Fronting Up or Fading Away?

So that, ladies and gentlemen, is that. Any lingering hopes that Joan Mir could turn this season around and reverse the inevitable were dispersed for good after a disappointing eighth place in Texas. The Majorcan may have already conceded his crown at Misano last month. But Sunday’s result means it will be mathematically impossible for the 24-year-old to become only the 13th rider in history to win back-to-back premier class crowns.

These last two performances feel as though Mir’s championship defence has come to an end with something representing a whimper, rather than a bang. And now that champion-elect Fabio Quartararo is out of sight and closing in on the right to wear the number one, it is probably the time to assess his performance as the reigning champ.

On the face of it, 2021 certainly hasn’t been a write off – far from it. Mir currently sits third overall and was still in the title reckoning for around two thirds of the season. Of the three Ducatis in the championship fight in the first half of the year, he sits ahead of two of them. And he’s currently nine places and 94 points up on the only other man using the same machinery as him. Alex Rins, remember, was third overall last season, despite riding with a busted right shoulder for the majority of it.

But a few other stats are less flattering. Mir has taken five podiums this year, but none of them have been wins. There have been no fastest laps, no front row starts, and he hasn’t even led a single lap of any race. What’s more, he’s averaged 11.6 points per race in 2021, which is down on his 2020 average (12.2). Barring a big turnaround, he could end the year as only the second rider in the modern four-stroke era to not win a race in his championship defence. That opening night in Qatar, when he rode like a champion fighting through to second, seems a distant memory.

There are mitigating circumstances, of course. Mainly, Suzuki has mostly stood still in a year when Yamaha, Ducati, Aprilia and, at times, KTM have taken strides forward. The GSX-RR is largely the same as what Mir raced last year. That’s not to say it isn’t competitive – it is, retaining its excellent agility balance. But Suzuki’s shortcomings – mainly qualifying – have been magnified further. He qualified on the second row four times last year. This time around he managed it just the once. That’s huge ground to be giving away to Quartararo, who has been off the front row on just one occasion, in each race.

As early as June, Mir could feel Quartararo and the pack of Ducatis – including Pecco Bagnaia, Jack Miller and Johann Zarco – taking decisive steps ahead, while he flailed among Suzuki’s same old failings. “I’m a bit worried because I want to defend the title,” he said after yet another disappointing qualifying in Barcelona. “We can push a bit more (to develop the bike), honestly. A lot of manufacturers improved and we didn’t improve.”

It is puzzling why it took so long for the blue bikes to feature a ride-height device when its benefits are so clear. The first evolution came for the Austrian double-header, but was then cast aside for the races at Silverstone, Aragon and Misano as it wouldn’t disengage smoothly. Rins was the first to notice Ducati using the device during the Malaysian Grand Prix in 2019. “I said I saw it but we didn’t push Suzuki a lot,” he admitted back in Austria. At Silverstone, Mir stated, “I lose 0.5s on a fast lap to Bagnaia” on the exit of Chapel onto the Hangar Straight. These are fairly major obstacles to overcome.

The surprise departure of Team Manager and figurehead Davide Brivio can’t have helped the situation, either. Project Leader Shinichi Sahara admitted he was “too busy to do (Brivio’s) job” during the British Grand Prix, while trying to match the strides made by Suzuki’s rivals.

Assessing the season up to the Austrian double header, Mir’s crew chief Frankie Carchedi told me, “I don’t think we’ve ever been too far away – maybe a little more than we wanted. Just a few moments (held us back, like) losing second place in Qatar. We had super wet pace at Le Mans and in the dry but, unfortunately, we had a flag-to-flag there. So, it’s not been terrible. (But) One of the hardest things obviously is that qualifying has been even worse than last year. We’ve had to come from so far back in every race. It’s been tough. Every time he’s started from the second row, we’ve been on the podium. It’s quite clear what we need to do.”

Yet that isn’t always so easy, with Suzuki one of the lesser resourced factories on the grid. As Kevin Schwantz, one of only six men to have won a premier class crown with Suzuki, explained to me last weekend, the factory’s size must always be taken into account.

“It’s such a hard thing at Suzuki with the manufacturer being such so much smaller, with the race shop being that much smaller, the development team being that much smaller,” said the Texan. “There are no satellite teams to help you with input, to give you data. It’s a really, really hard job. It’s so easy to get frustrated. But what you’ve got to remember is the guys at the shop are the guys that gave you the bike that you won on last year. They’re eventually going to get it right again.”

Does the #34 consider Mir to currently be riding on the same level as the men ahead of him in the championship? “I don’t think he’s there right now. I think he’s working to get back to that championship calibre guy that we had last season. There have been a couple of times Rins has got in front and ridden away from him. And more often than not Rins has ended up on the ground. (Joan) is there 100%. I think maybe the bike’s not there 100%. And because (together) they’re both not 100%, he hasn’t got that extra Joan Mir that we saw some of the time last year late in the races, going to the front.”

Up to Aragon I was struck by Mir’s riding. OK, he wasn’t winning. But no matter how disastrous the qualifying, he was there on Sunday, taking the best possible result home. Just compare his race times from last year to this: he was 21s faster at this year’s Spanish GP than Jerez last year (OK, the temperature had a lot to do with that). But he posted the same race time to a second at Misano in 2021 as he did in the second race of ’20. And he was 7s faster at Barcelona this year, and 5s quicker at Aragon. All on pretty much the same package.

And you can’t accuse Mir of taking the deterioration of his title challenge lightly. He was in spiky form after the Aragon race, when he failed to get on an even keel with Bagnaia and Marc Marquez ahead. When he conceded the crown at Misano, he was forlorn. “I know my potential this year. I’m angry. I’m riding better. I’m making less mistakes and I’m a better rider. And I will not get the championship. It’s difficult to understand.” These are certainly the qualities you want to hear from a champion.

It’s worth reminding ourselves, he’s still only 24 in only his sixth season as a world championship rider. Yes, this year seems to be fizzling out. But I have no doubt that if Suzuki can address of its shortcomings this winter, Mir will be back, fighting at the front in next year’s title race.