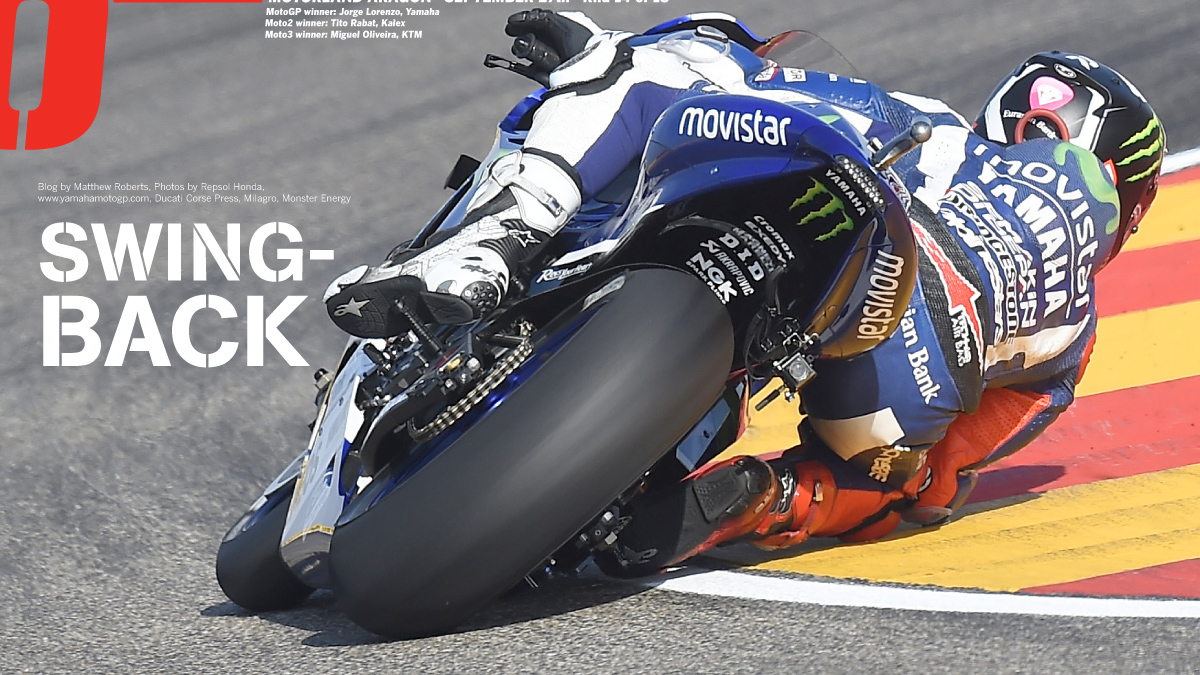 The latest MotoGP race at Aragon saw another tidal shift in the chase for the title between the self-styled ‘little fish’ and a man who was all too willing to accept the role of the shark. With fourteen points between Valentino Rossi and Jorge Lorenzo and four rounds to go, you’d imagine it’s going to take another deluge at either Sepang, Motegi, Phillip Island or Valencia to keep Rossi afloat and out of the jaws of his team-mate now.

I thought Jorge’s celebration, when he stood on the pegs of his M1 and made a fin with his hand on his head, was in good humour and I was surprised to hear him criticised by television pundits after the race, notably James Toseland. JT suggested that it was an arrogant celebration, and one of the reasons why Lorenzo could never be as popular with the fans as Rossi.

Personally, I saw it as the perfect response to Rossi’s mind games because for all of the wit behind the Misano helmet design (which I thought was brilliant, by the way), there was also mischievous intent. For the seven-time World Champion, holding the championship lead with six rounds remaining, to paint himself as the underdog was tongue-in-cheek at best and, at worst, another example of Valentino using his playful image to surreptitiously undermine a sensitive rival.

The week after Casey Stoner won the title at Motegi in 2007, Rossi produced a new helmet with an aboriginal design for the Australian Grand Prix. Up until that year, Phillip Island had been his race and he is still adored by the majority of fans there (as he is everywhere!). Like all of Aldo Drudi’s work the design looked awesome and the fans loved it. But I know for a fact that Casey didn’t, and for him to make the Island his own over the next six years was special to him for several reasons.

To read the rest of the Blog click HERE