After all the months of speculation and doubt over the event happening, the WorldSBK championship finally landed in Argentina at the weekend. GeeBee landed in South America a few days earlier than the teams and riders, taking the chance to explore a new destination. I landed in Santiagio in Chile, picked up a rental car, and headed through the Andes to Argentina and a first stop in Mendoza.

When it was first suggested that there would be a race in San Juan I was immediately enthused. I had never been to South America and had heard so many good things about Argentina that I was really looking forward to going. Having done a bit of online research about San Juan and Mendoza regions I decided the plan would be to arrive the weekend before and have a proper look around the region before the race action got underway, and what better way to do that than by motorcycle.

I had put together an itinerary for the trip and had hoped to use a current model touring bike and write about the experience. However, after much to-oing-and-froing that scheme fell apart and I fell back on plan B which was to rent a bike from a touring company in Mendoza. I was joined by US photographer, and friend of Jake Gagne, Corey Coulter and we set off last Monday morning loaded-up on two Honda 250 Tornados on what was to be a really eventful trip. 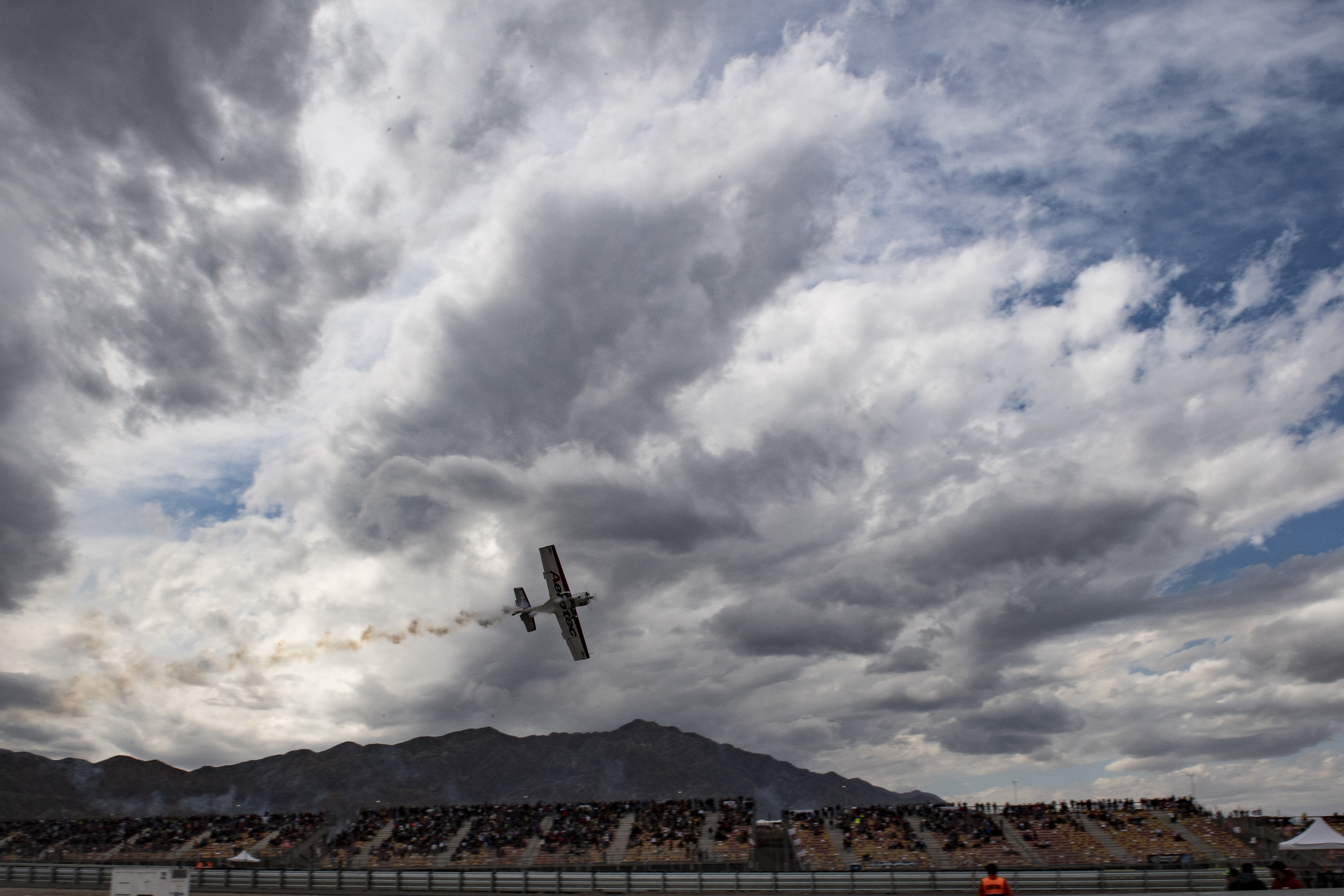 What quickly became apparent was that I had confused my intentions with my abilities, both in terms of my itinerary and my off road riding skills. There was no way we were going to be able to cover the route I had planned, partly due to the small capacity of the bikes but also due to the fact that we kept stopping every two minutes to marvel at the beauty of the scenery. We were riding through the foothills of the Andes and it is a truly stunning part of the world.

After a roadside puncture repair cut short part of our route we ended up in San Juan a day early. We came south on the famous Ruta Nacional 40 which runs parallel to the Andes for the entire north/south length of Argentina and stumbled across this bustling construction site on the edge of the desert mountains outside San Juan city.

The final bolts were being tightened and the last coat of paint was being applied to the El Villicum circuit when we rode past on Tuesday afternoon but the immediate impression was – wow, what a great looking circuit, and all this in the space of a few months.

When we were chasing around Europe in the summer, San Juan was in the depth of winter and reports were that the track hadn’t been laid and the likelihood of the event taking place was worse than slim. Then, here we were, looking down the road towards this stunning looking motor racing facility.

We returned the bikes to Mendoza on Wednesday and headed back north to start work at the circuit on Thursday morning. As soon as I walked into the paddock I was warned to expect some teething problems. The actual Media Centre hadn’t been constructed and we were set up in a huge tent in the paddock – no different to the last 15 years or so at Laguna Seca in actual fact, but in reality there were few issues. The tent was noisy with the Paddock Show on one side and Supersport 300 bikes bouncing of the rev limiter being warmed up on the other side, the internet kept dropping out and there was the inevitable security worry of working in a tent, but otherwise it was like any other race on the calendar. As I said, remarkable given that six months ago there was very little on site. 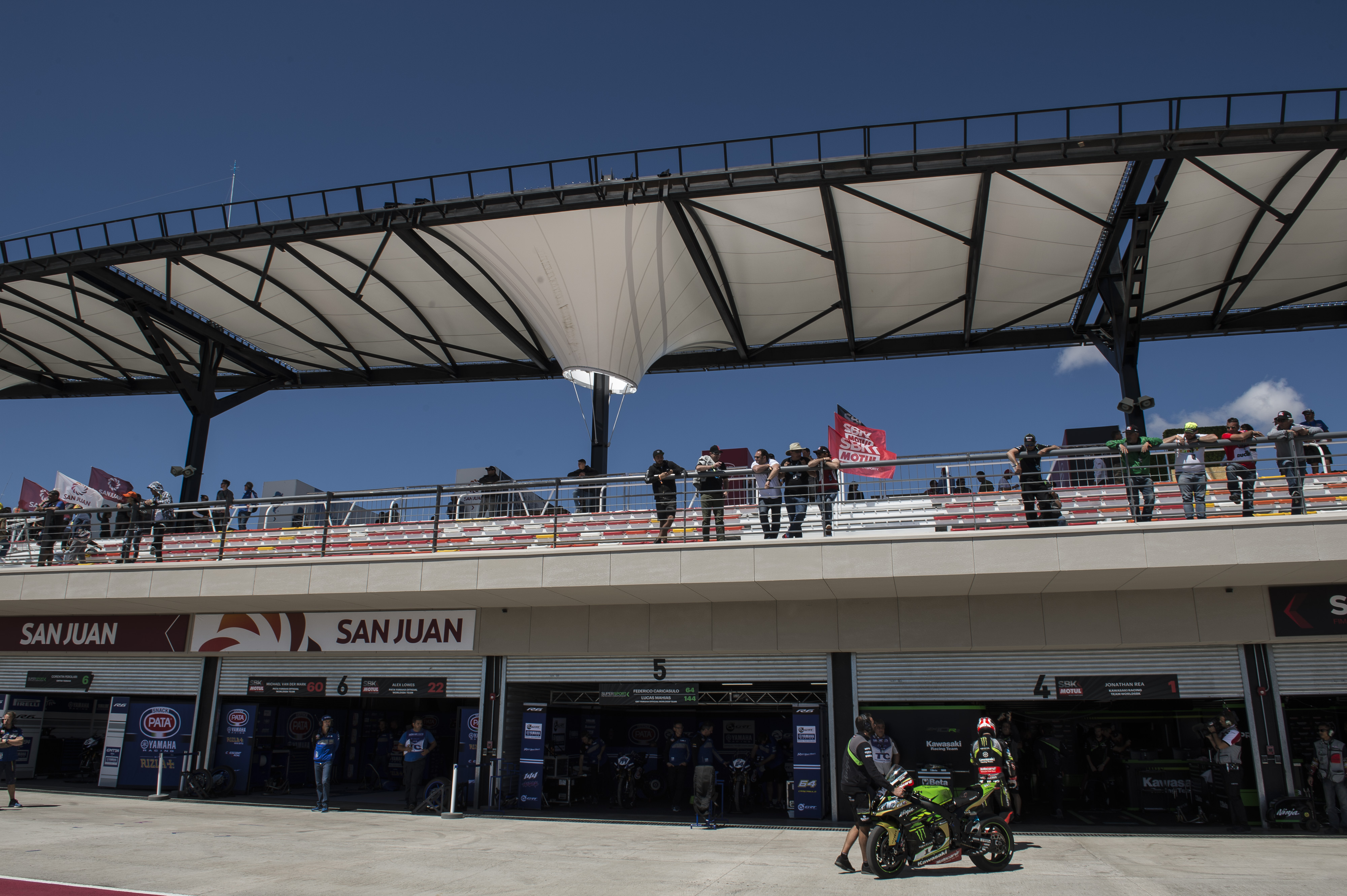 The track itself posed some problems with it being a completely new surface that had construction traffic running on it a few days earlier. Being close to the desert it was also dry and dusty. The layout looked pretty good, and from what I heard most riders were pretty positive about it. From my perspective there were a few problems with the layout as well.

It struck me as I was making a recce on Thursday afternoon that it was like a South American version of the Losail Circuit in Qatar. The service road was so far away from the track and separated by vast white stone, gravel traps. Getting tight action shots was going to be a challenge. That challenge was multiplied on Friday when it became apparent that everywhere you looked there was an intense heat shimmer on the track in the warm bright sunshine. It was virtually impossible therefore to have bright, crisp images at some locations. On a plus side the mountain back drop was something fairly unique, helped by a fresh dusting of snow on the highest ranges on Saturday night it reminded mea little of Miller in Utah. 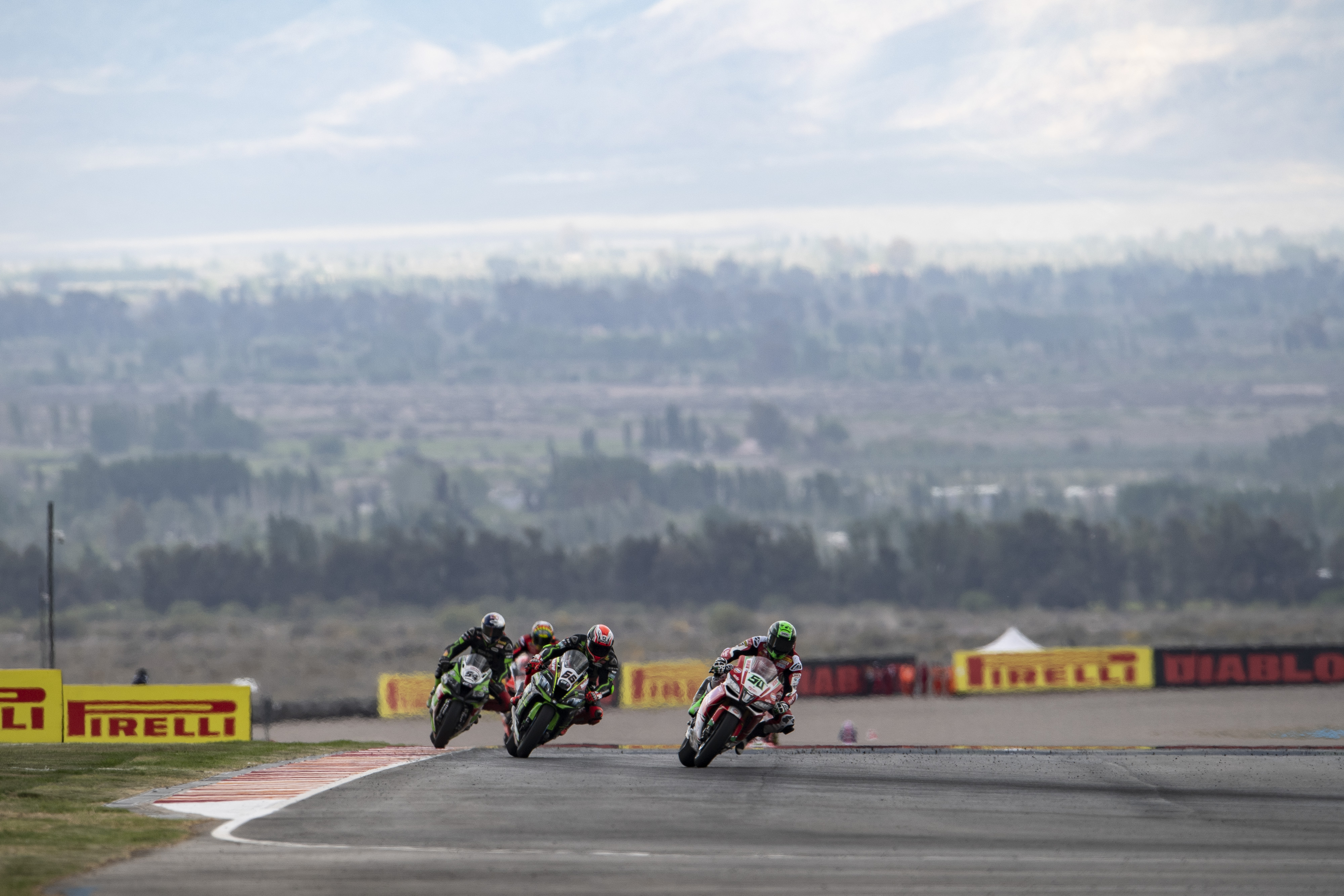 Not every track is perfect but I think the people at San Juan have done a pretty good job and with a little improvement in the years to come I am sure it will become a very popular destination.

As for the racing….well…..we all know what happened, and probably did before it happened. All you really can do is once again marvel at how good JR is. Another record in WorldSBK has gone with him now having 10 race victories in a row. Is anyone willing to bet against more records tumbling before the final chequered flag in Qatar in two weeks time? 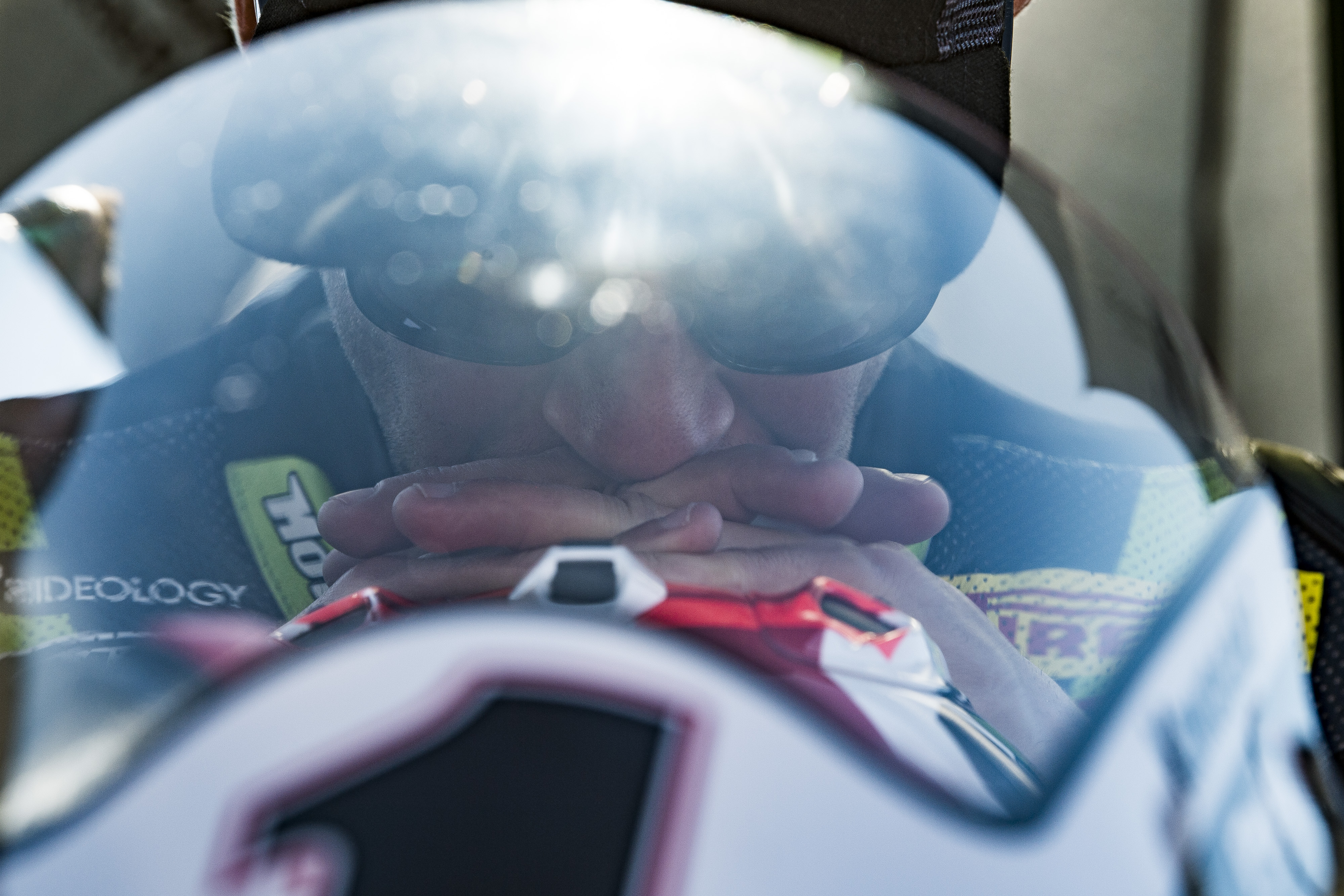 The one thing that was interesting was that with a clean sheet of paper, if not a racing surface, there were a few surprise performers. Toprak Razgatlioglu was consistently fast all weekend, scoring his second podium of the year on Saturday and being disappointed not to repeat that on Sunday. I also thought that Jake Gagne gave us a glimpse of what he can do on the Honda. After FP2 on Friday he was sixth fastest and despite crashing out in race one, had a strong performance in race two. His crew chief Mick Shanley was pleased that we had seen a ‘racing’ Jake this weekend. Rumour has it that he is still in the running to remain at Red Bull Honda with a second option of moving to the Triple M squad a possibility as well. 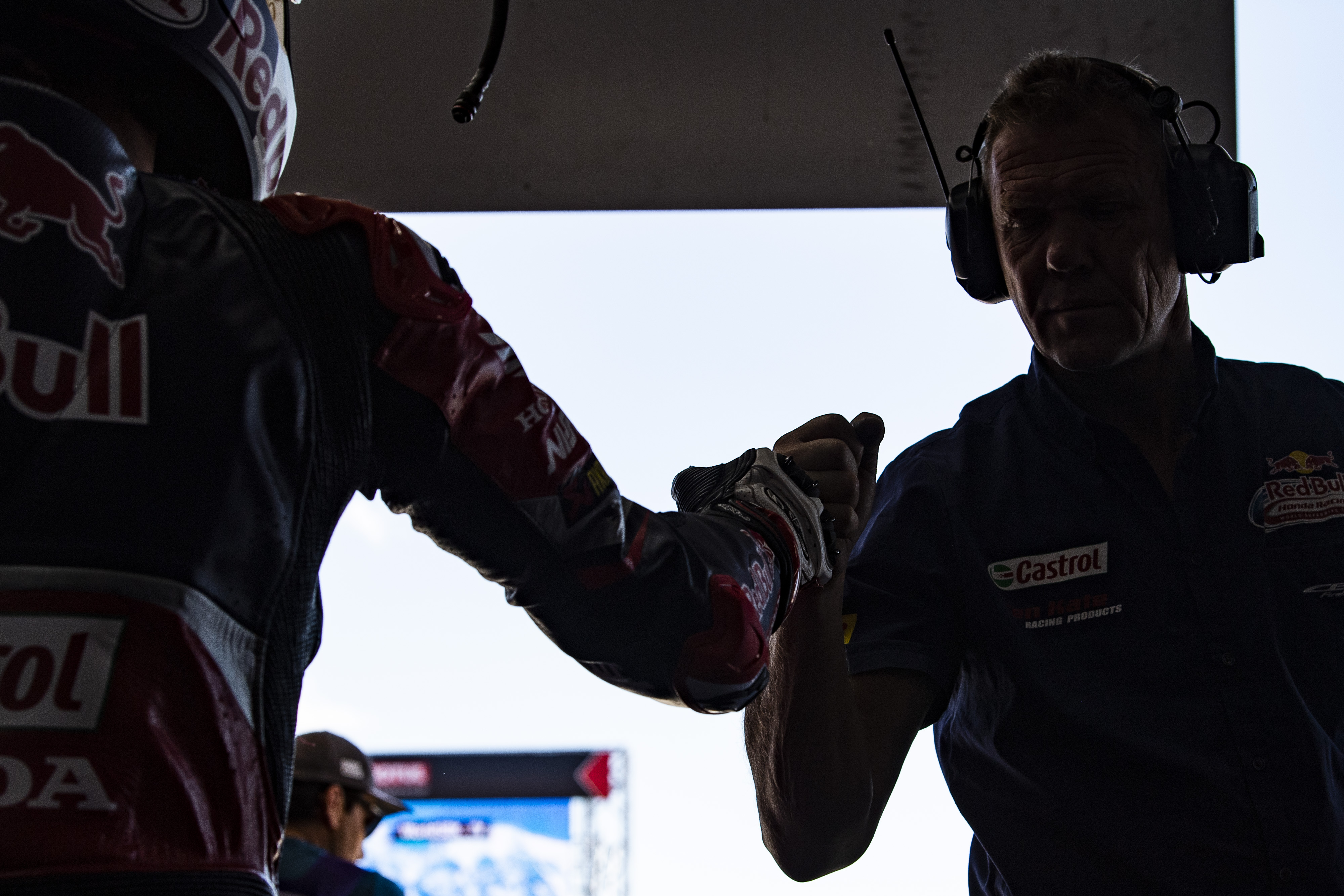 It would also appear that if everything goes to plan Lucas Mahias will ride a Yamaha in the Superbike class for GRT Racing. He was, however, quite philosophical about the current position when I spoke to him saying that normally this would be the case but he knows that in racing nothing is certain until you sit on the grid for the first race.

The question still remains however; who will challenge the dominance of Rea and Kawasaki in 2019? With three races a weekend coming, there is every likelihood that more records will tumble next year.

For me there is unfinished business in San Juan. I didn’t get to scratch the surface in terms of exploring the region and my plan for 2019 is to come back and fill in a few of the parts of my original route that I didn’t get to cover. On the weekend I met a group of riders that had also come from Chile. However, they had crossed the border much further south and taken 12 days to travel up RN40 to get to the track. They had come specifically to see WorldSBK and were heading back to Santiago via the Los Libertadores mountain frontier like us. I don’t think Mrs GeeBee will let me get away with a 12 day trip next year but I certainly want to explore more of this beautiful region.

As an entirely new destination on the WorldSBK trail, San Juan gets a big thumbs up from me.