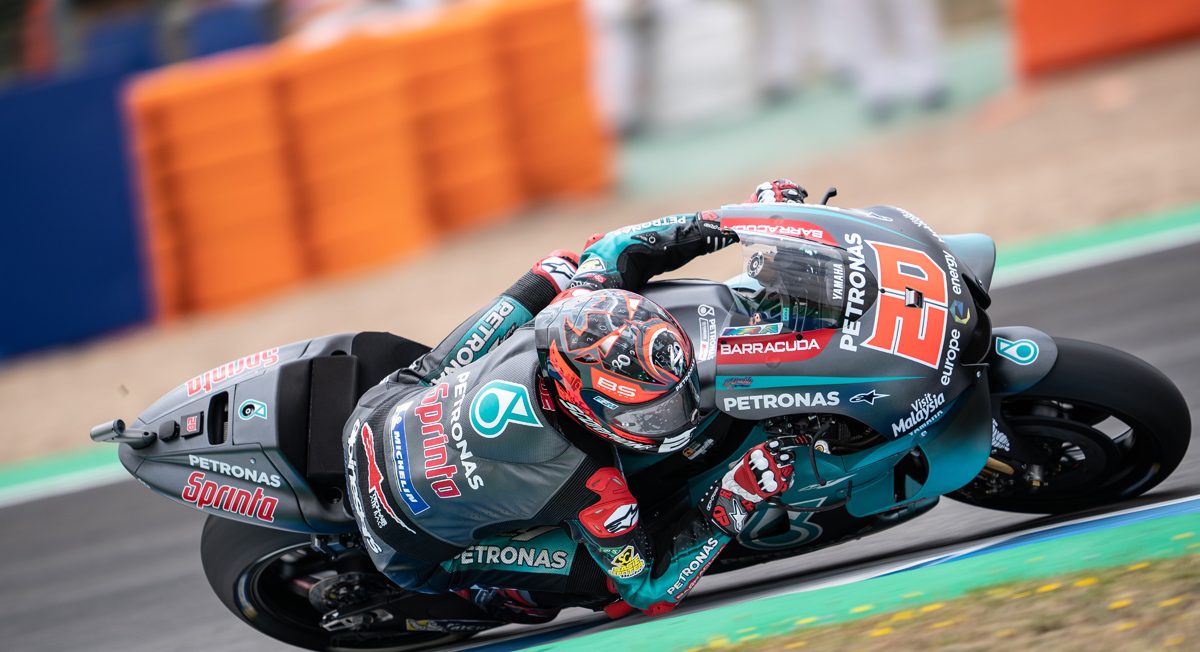 On the face of it, last weekend’s Spanish Grand Prix at Jerez represented little more than Marc Marquez’s second simple stroll to victory in three rounds. But scratch away at the surface and this wasn’t just any other weekend for the reigning champ. Along with cruising to his 46th premier class win, the 26-year old retook the championship lead after three weeks off the top.

Most intriguingly of all, Marquez – the kind of rider who appears hell-bent on having the record book rewritten in its entirety by the time he’s done – fronted up to an entirely new experience on Saturday. Pulling into parc fermé after a barely believable qualifying session, he was joined by Fabio Quartararo and Franco Morbidelli, a prodigious duo that are younger than him.

This was an entirely new predicament for Marquez, who had never been the eldest of the Saturday top three in his previous 84 front row starts. And while Sunday’s action demonstrated talk of a ‘changing of the guard’ is ludicrously premature, it did hint at a rosy vision of the future thanks largely to one of those men.

And if we’re going off looks, Quartararo is only just that. Yes, it was 23-year old Morbidelli that held second for the first ten laps of Sunday’s race. But as anyone watching would attest, this Grand Prix will be remembered as the one in which his team-mate staked his claim as motorcycle racing’s next superstar-in-waiting. This felt like the start of something very special.

From nearly the first moment to the last, Quartararo’s Andalusian adventure resembled something right out of Marquez’s not-too-distant past. Breaking the Calatan’s record for the youngest premier class pole sitter, at 20 years and 14 days old, in a memorable 1-2 for the newly formed Petronas SRT Yamaha team was just the start. He posted not one, not two, but three laps quicker than the rest of the field at Monday’s post-race test. And before then he had the temerity to throw the field’s established reputations to one side and have a crack at Marquez on his own patch.

After disposing with Morbdeilli on lap ten, here was Quartararo chasing the seven-time world champion down with the kind of loose, careless abandon that suggested his life depended on it. Marquez assured us in the aftermath the Frenchman’s Sunday showing was “expected” after his qualifying feats. But who really foresaw him providing the #93 with his greatest threat?

There had been hints of this through testing, of course. Had Quartararo not stalled his M1 on the grid at Losail we may have witnessed something similar. Yes, top tens in Argentina and Austin were impressive. But there are few bigger challenges on the calendar than Jerez, where the endless succession of bends and punishing springtime sun quicken the fatigue and strain the tyres. It always gives an indication of who’ll be fast and who’ll be slow in the months ahead. “If you are strong in Jerez you can be strong in all the European circuits,” Valentino Rossi said a few years back. A podium at Jerez rarely equates to a flash in the pan.

Only a broken quickshifter dashed the fairytale ending 14 laps in. Later that evening Quartararo already had appeared to shrug it off. “We’ll leave all the negatives here and take the positives home,” he smiled. But for a rider that had won just one grand prix, scored four podiums and claimed three pole positions by his 20th birthday (by contrast Sunday’s race winner had notched up 26, 39 and 28 of each by that age) how were such positives possible?

Well, Quartararo is no ordinary talent. Thanks to a meteoric rise through the junior ranks he was being touted as the man most likely to challenge Marquez this time four years ago. Make no mistake: no one has taken the Spanish CEV/FIM Junior World Championship by storm in the manner he did in 2013 and ‘14. Building up teenagers is always a dangerous game. But that first title – when his tiny Wild Wolf Racing squad, running an unfashionable FTR Honda, were so underprepared for his championship win at Jerez they had to borrow ‘#1’ stickers from a rival team – justified the hype.

One only needs to wonder his outright speed in year two. In 2014 Quartararo broke the Circuit of Barcelona’s outright Moto3 lap record and set practice times good enough for the first two rows of the world championship grid at two other tracks, showcasing an ability that was already at the level of riders three, four and even five years his senior. “He was the youngest rider and was destroying everyone,” remembers team boss Wilco Zeelenberg, who began keeping tabs on the teenager back then.

His first season in Moto3 is largely written off. But Quartararo led the last lap in his first race then finished as runner-up in his second. A broken ankle at Misano put paid to any hopes of ending the year well. From there poor management and poor decisions put his career in jeopardy. Leaving Emilio Alzamora’s Estrella Galicia structure in 2016 was always a risky move; not least as it was for Leopard, who had promised they’d be running Honda machinery. Fabio was as surprised as anyone when told, in actual fact, he’d be riding a KTM that year.

But how he has built himself back from Grand Prix’s unwanted title of forgotten man showed real resolve. The start to life in Luca Boscoscuro’s Speed Up team in Moto2 last year wasn’t straightforward, with three changes of suspension manufacturer in as many months. He ploughed on nonetheless, and by Assen, where he staged a staggering comeback ride that essentially earned him a place in SRT Yamaha’s ranks, he had seen of any possible challenge of team-mate Danny Kent by adjusting his riding style completely from the start of the year.

Now backed by sound management and in a team with the comforting arm of Zeelenberg close at hand, Quartararo has the surroundings to help him flourish… and the bike. Johann Zarco, Jonas Folger and Hafizh Syahrin proved in recent years the M1 is MotoGP’s friendliest steed for any aspiring rookie. But Quartararo is younger and less experienced than them all. And it took him next to no time to learn its big secrets. “The thing that impressed me was that his weak point was the braking,” Morbidelli noted on Saturday. “But he managed to get it right quite soon. From his weak point the braking became his strong point. This shows that he’s a great rider.”

Team principle Johan Stigefelt backed that up: “It was him that changed his style, his way. We basically don’t touch his bike. It’s like the same bike during the last three races. They have been very, very, very small changes. You wouldn’t believe it! At the moment he’s just enjoying and riding and doing his own work.”

His adaption has been helped by an open, supportive team that features “nothing magical” according to Eric Mahe, his personal manager of just over a year; “Just a really good harmony. For a young guy like Fabio this is perfect.”

“He’s very calm now, very quiet, and eager to learn,” says Zeelenberg of his rider’s team ethic. “He helps the other riders in the team as well, [Ayumu] Sasaki and [Khairul Idham] Pawi, they all love him, because they are very few MotoGP riders who help others. And he’s really involved with those guys. He’s a team player, and you can really feel it. And he fits right in with our team because of that.”

To expect him to regularly challenge Marquez – six years, 71 wins and seven world titles his senior – from here is a bit much. But at the right tracks, Quartararo is ready to fight for podiums, possibly more. “I don’t want to put pressure on his shoulders,” says Mahe. “But if you ask me for my opinion, Fabio is already in the middle of the top riders. We don’t have to push him. He already has the pace. He already knows how to manage the tyres. He’s in the middle of the top.”

Three races remain for him to break Marquez’s youngest ever winner record (20 years, 63 days) in the premier class. But even if he fails in that regard, recent events at Jerez showed us Quartararo will be among the reigning champion’s concerns long beyond that.